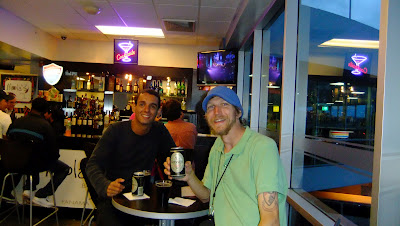 Another Guinness, Another Cancelled Flight…in Panama

My departure from Panama City was a pleasant one, despite a series of dramas inside the walls of its Tocumen International Airport. The day had been kind to me. I had met a great Brazilian guy called Eduardo and we toured Panama City together, checking out the new and old of the city, sampling the beer (Atlas) and the food (barbecued chicken lunch) and seeing the fabulously impressive Panama Canal. Now it was time to head our separate ways, from the airport. Just before that we managed to sneak in a tin of Guinness! At Mola’s Bar, in the airport. Given, this wasn’t proper Guinness, it was the nearest I had got for a long time! Well needed and deserved. 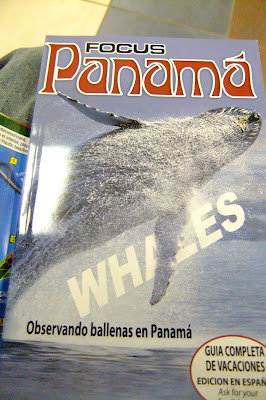 I hadn’t managed to see the whales while in Panama, but never mind. The Canal, the Old Town and the refreshing Atlas Beer were enough. 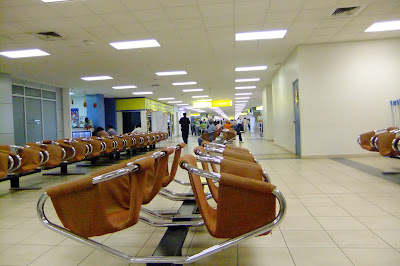 Panama’s Tocumen International Airport is not particularly busy, yet remains a common “stop over” place for long haul flights. Probably in the same way that Mexico City, Hong Kong, Kuala Lumpur and Singapore tend to be. 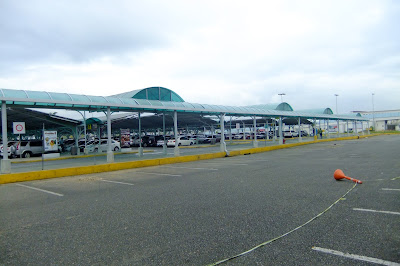 The bus journey back to the airport from the city had been a tiring relaxing one. Eduardo and I boarded the bus from Panama City’s main bus station, this one: 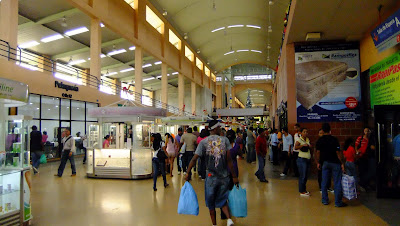 And in possibly the worst ever photo taken of me, I was a bit travel weary on this journey! 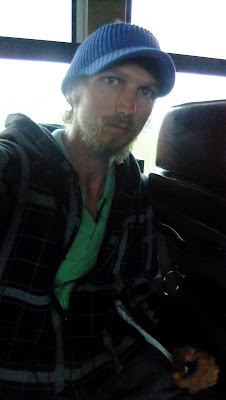 Will you forgive me, I;d just been to four countries in less than 2 weeks, done the Inca Trail and the Salar de Uyuni tour…. 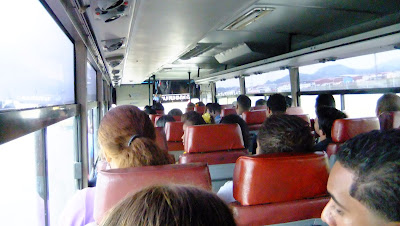 And my view from that Panama bus. On the bus, Eduardo fell asleep and the journey lasted just 50 minutes, along a carriageway. Upon realising we were at the airport, I knocked Eduardo and we were the only two passengers to get off the bus. It was quite odd that actually. We expected the airport to be some kind of main stop, if not the last one. 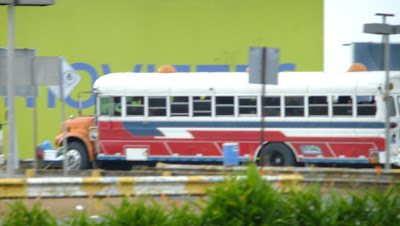 And I know I’ve used the above photo a few times, but as this is my final post on Panama, here it is again, captured from my bus window those wonderful Panama style buses. The buzz of Central America and the Caribbean encapsulated within. I had paid just 5 US cents for the 50 minute bus journey, but when Eduardo stepped off the driver asked him for 2 US Dollars, so in the end we paid $1.05. That was actually fair enough in fact, I’ve been ripped off a hell of a lot more in other places. 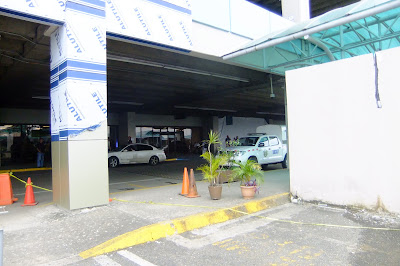 Eduardo fancied a spliff so he went for a smoke, while I went in to collect my bag and go through security. I had carried a 100 ml deodorant with me for the previous 2 and a half months (through hand luggage at airports in Australia, New Zealand, Argentina and Ecuador) yet here in Panama they decided to ban it. I was upset and preceeded to spray the entire remainder of the can in the security guy’s faces to make some kind of point. One of the officials laughed at it, as did a fellow passenger. It was comical. If I couldn’t take my deodorant through, I wanted to smell as good as I could for the rest of the night. The argument was that it was flammable. Panama seems to try and emulate the USA in its approaches sometimes. Not only do they use the US Dollar, but they try to introduce measures as extreme as those seen in Obama land. 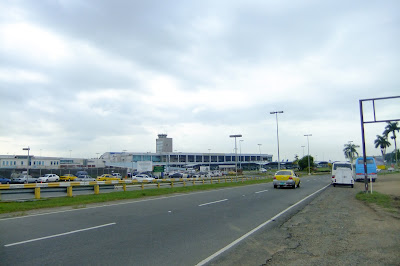 My last outdoor view of Panama land before heading into the airport. 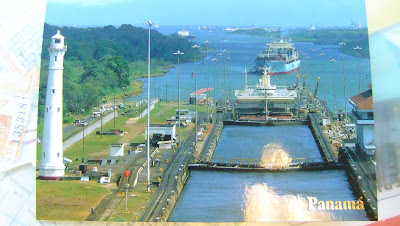 I always get my brother a postcard from everywhere I go. His Panama one was of the Canal, obviously. 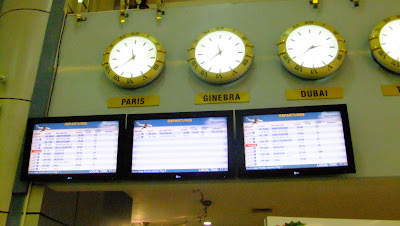 The times in lands afar, and more importantly the time of my flight. It was now almost 6pm and my flight was at 20.20 pm (8.20 pm). The oddest thing was I got an entry stamp for Panama but they didn’t give me a departure stamp, or even send me through to immigration. I did worry about this at the start but Eduardo had been the same. Each country I guess has its own system, but I did find this odd. Anyone ever had an exit or departure stamp from Panama? 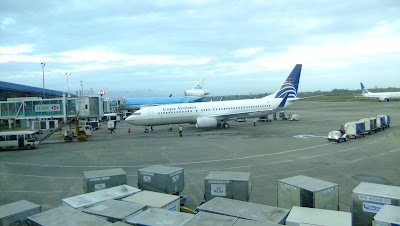 Well I had my flight ticket and it seemed to be on time. There was no exchange place to convert my US Dollars into Colombian Pesos however so I’d have to wait until I got to Bogota for that. I wasn’t too worried as my mate Julio Felipe was due to meet me at Bogota International Airport. I hadn’t seen him in FIVE years. I was to fly with Copa Airlines. 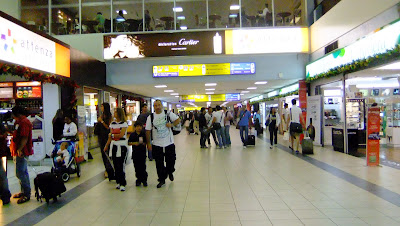 A large shopping area inside Panama International Airport. I bought a coffee and put my photos and videos onto my laptop and hard drive, while I waited on Eduardo. I knew he’d show up at some point, even though his flight to New York was scheduled to leave after mine. I also wrote my brother his postcard and had the stamp for it, but there was no postbox, so sadly I couldn’t send it to him from Panama, decided to keep it and post it on later. 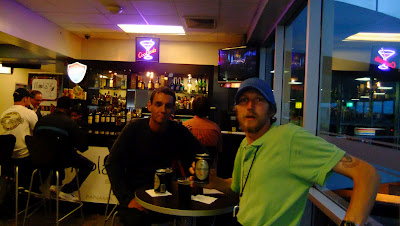 Then I met Eduardo, it was meant to happen. In a busy airport there was a risk we’d not see each other again. But he showed up for his 9.30 pm flight and we decided to go to Mola’s Bar for that final beer together. Life was relaxing. I treated him to the Guinness since it’s an Irish drink and we’d had a fab day out. 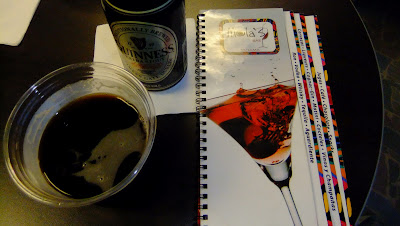 My only ever Guinness to date in Central America!! At Mola’s Bar, Tocumen International Airport, Panama. 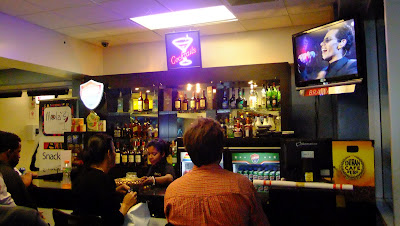 Cliff Richard comes on TV at Mola’s Bar. We head to duty free. Eduardo is on route to visiting his sister in New York and wants to buy her a bottle of Tequila. 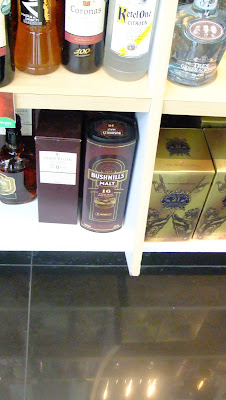 After having the Guinness there were two more random Irish moments. First of all I spotted Bushmills Whiskey for sale in Duty Free. Then a PR lady offered us both a shot of Baileys “to try it” of course I played blind and pretended I had never tried it before. Then Eduardo got his Tequila, still sporting his Panama hat and I went to double check the departures as my flight was looming. Oh Oh! 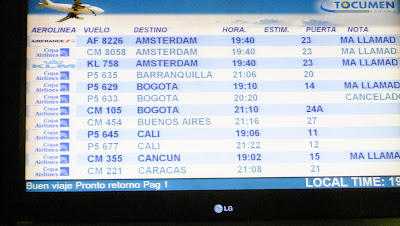 My Flight, above listed as the Copa Airlines P5 633 to Bogota at 20.20 was CANCELLED. This was my third cancelled flight of this trip (one in Argentina and one in Peru) so I was well used to it and un stressed. I just worried about the delay and wait in Bogota Airport by my friend Julio. As I had of course, no way to contact him. 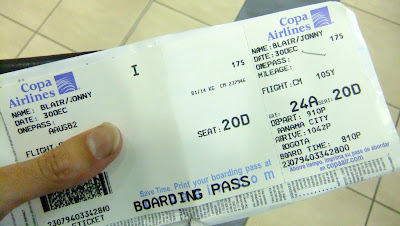 So I went up with my boarding pass for the CANCELLED FLIGHT and the lady took it in right away and replaced it immediately putting me on the next available flight to Bogota, just 50 minutes later. In the end there would be a delay on it. Above my second flight ticket. For once, I hadn’t photographed my first flight ticket. At least I was on a flight and was heading for Bogota! In the meantime Eduardo had already left for New York, by the time I got round to boarding. 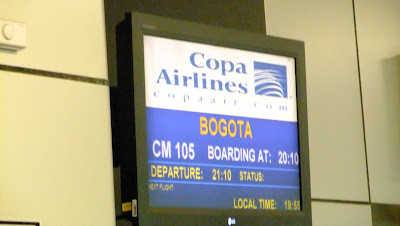 I boarded just before 9pm from Gate 24B. 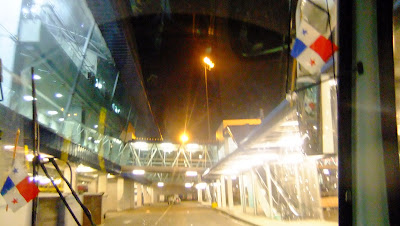 There was a proper flag farewell to Panama too, with my bus from the terminal to the flight having Panama flags on it. 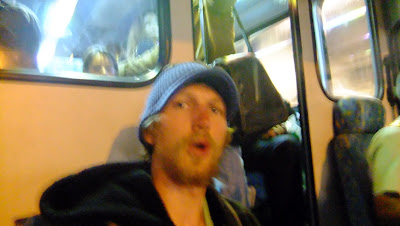 I captured a couple of odd photos of myself. I think I hadn’t had much sleep in the last few weeks. Here above on the bus to the plane. 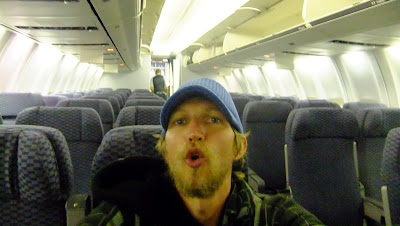 I was so eager I was the first passenger on the flight. The flight wasnt even full, or memorable. I was so excited to seeing Julio Felipe again, nothing worried me. 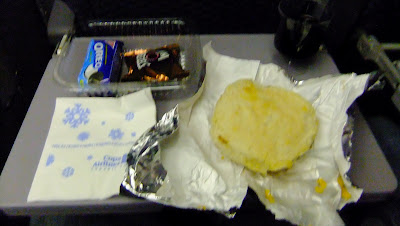 Especially not when a nice bread roll arrived with a red wine, plus a dessert of Oreos and another biscuit! I was happy. 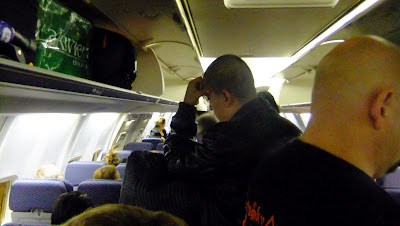 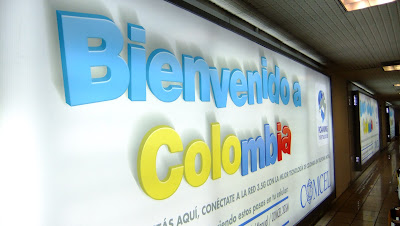 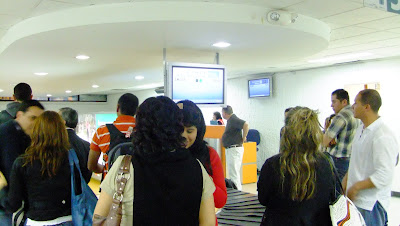 My bag arrived safe and well and within minutes I was out through customs after a friendly welcome and met up with Julio and his mate Sergio before being taxi-ed to the Nice district for a full on welcome party! 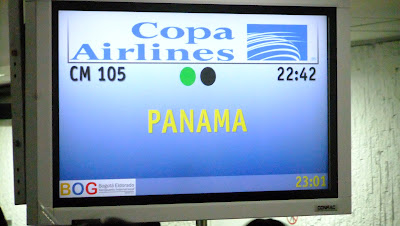