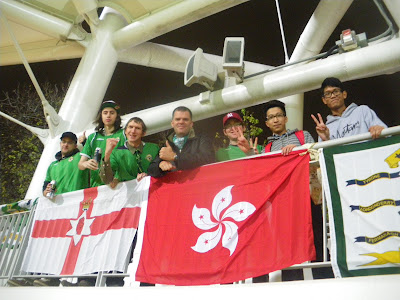 The Hong Kong Northern Ireland Supporters Club was successfully launched on Leap Year Day (Wednesday 29th February 2012) in Mong Kok, Kowloon. Including one member from the Far East NISC, a turn up of 6 on the night, plus 2 randoms saw Hong Kong defeat Taiwan 5-1 at home in a comprehensive friendly victory against a backdrop of gaping skyscrapers and humid Asian air. 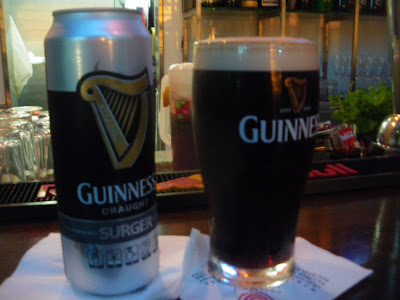 The night included meeting in Langham Place (Bar Amici on the 13th Floor) for buy one get one free Guinnesses, a quick pint in Riders by the stadium and our own section of green in amongst all the red supporters from Hong Kong. Hong Kong played outstanding under new Scottish manager Ernie Merrick. Star striker in the 5-1 demolition of Taiwan was number 7 Chan Sui Key. After the match the club was launched officially with a toast over a few beers in Riders Bar, Prince Edward.Photos…Ticket and pint:
Amici Bar, Mong Kok, first beer of the night:

Thanks to Neil from the Far East NISC for attending and wee Jono and Daniel who made the trip over for it. This was the third different continent I have launched a NISC in, and the 7th different NISC I’ve been present at a meeting. Maybe one of these days I’ll actually stay in the same place for a while…We also have a sister club in the Far East NISC. The Far East NISC have held recent meetings in Jakarta and Manila, and we are planning an away match together.

The next Hong Kong NISC get together has yet to be confirmed, probably to watch the Euro 2012 Final together, but a few of us are already spying the Azerbaijan away match in 2013, given it’s closer to us than it is to those in Belfast.

We are Hong Kong NISC!

1 thought on “We Are Hong Kong Northern Ireland Supporters Club!”