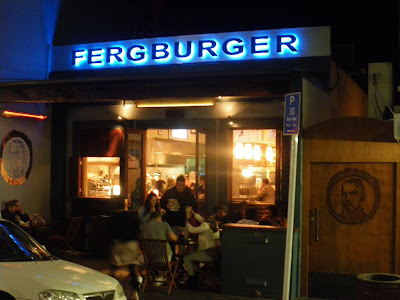 Apparently “everyone who has ever been to Queenstown, (the New Zealand one) has had a Fergburger”, so it’s one of those stupid “when in Rome” type of analogies, which generally I hate, but this particular one couldn’t pass. I tried a New Zealand fergburger, which is today’s Friday’s Featured Food! 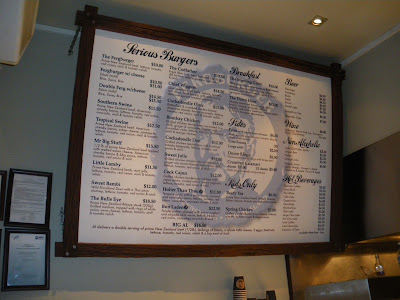 I had heard of the “world famous” Fergburger, and as a traveller you often hear people talk about it. let’s have some facts. Fergburger ONLY began in the year 2000. There is only ONE Fergburger outlet in the whole world. Fergburger is situated in the party zone of Queenstown on New Zealand’s South Island. 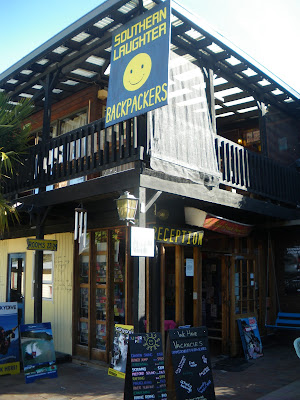 So I was staying at Southern Laughter hostel, and was in Room 22, there I met Tim from Bedford. We had both done the Paragliding that day (from different places) and Tim had also done a Sky Dive. We agreed that we should grab some food before going for a drink (I had one free drink coupon, and we both had 2-4-1 drinks offers if we showed our room key.) 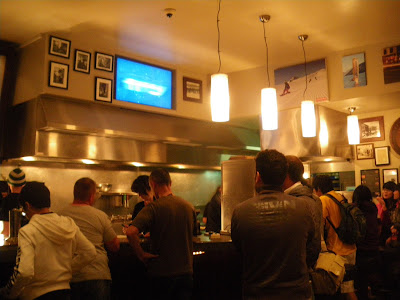 On route, the obvious food stop of choice was the legendary Fergburger. As expected there was a big queue and everyone was trying to get their hands on a Fergie. We both opted for the traditional option, and by far the most popular item on the menu…a Fergburger. The original. I decided to have cheese on mine for an extra 50 cents, the burger itself is $10, which in the UK is about £5. Tim went for no cheese. 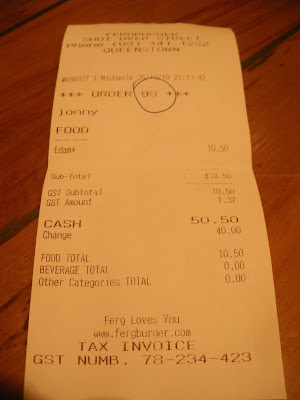 As we waited in the queue, I also noticed they were licenced to sell alcohol and indeed had Tui/Speights on tap. That was odd for a burger shop. Then I got to the front of the queue and blurted out my order to the lady. Only to be greeted by the unexpected charm of “you are so from Belfast aren’t in you?” from the smiling, pretty perky cashier in her own Northern Irish accent. “Em actually, no I’m not, from Bangor, but near enough! Where are you from?” “Antrim Road”, and there you have it – the Northern Irish nomads are getting around the world. And this young lady (with black hair behind the kiosk in that photo) Michaela was serving me in the wonder of Queenstown!! We both remarked on how long since we’d heard a random Northern Irish accent. 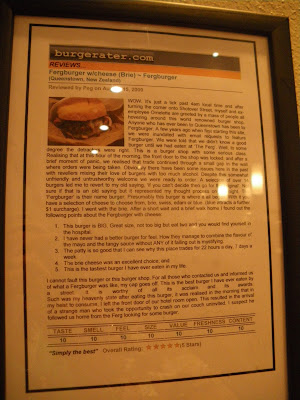 I had of course been with Sydney NISC, Owen and Pat in the previous few weeks – but that was planned. Michaela was my first NI accent experience for quite some time, possibly since self pronounced “Derry country girl” Sheree O’Reilly worked with me in PJ Gallagher’s Irish Pub a few months previous. 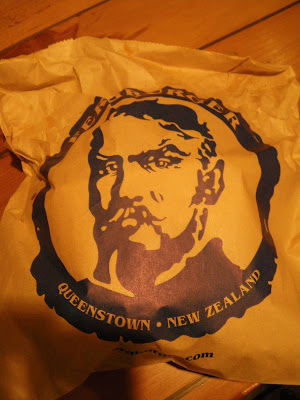 The wait of 10 minutes was easily passed by admiring the walls, full of memorabilia, burger reports and merchandise from Fergburger. I was order number 98, and sure enough got called up fairly quickly to receive my Fergburger in a white paper bag with the Fergburger logo (presumably that of “Ferg” on it). 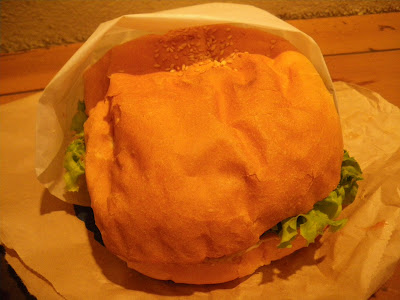 It looked every bit the part, a massive burger not dissimilar to one my mate Dave Watson had eaten in Poland in 2005. And I launched into it. 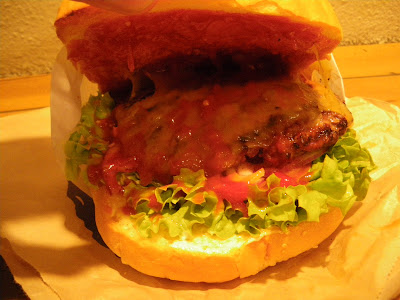 It was lush. A lovely sauce was sandwiched in between the beef (seemingly cooked medium rare), tomato, cheese, lettuce and large bap. Straight away it was worth the $10.50 I paid for it. 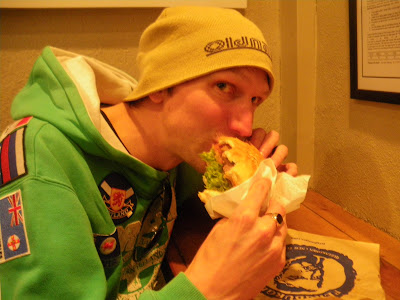 Me getting tore into the Fergburger. Tim’s arrived soon and we both agreed it was the best burger we had ever had. After that it was down the pub for a few leisurely jars. 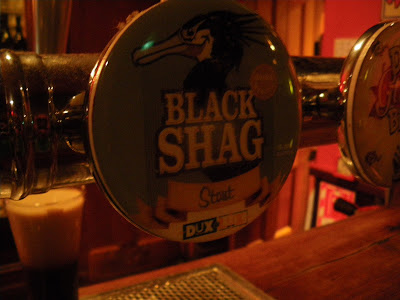 I had a free “Black Shag” beer at Dux De Lux. The free coupon was from doing the Para Gliding earlier on. 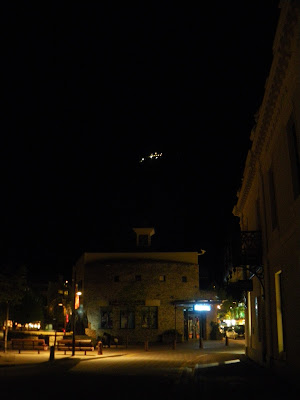 Dux De Lux Bar, Queenstown. Which was full of regulars doing a pub quiz. And me and Tim. 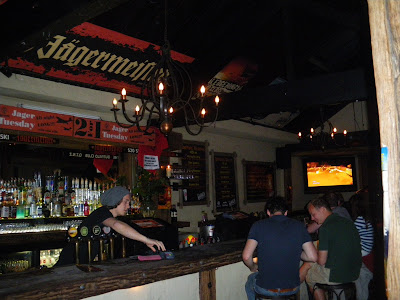 We had heard a lot about Buffalo Bar in Queenstown – this in the summer is some kind of crazy party town and Buffalo is one of many pumping bars. Here in the Spring it was calm and peaceful and quiet. But on entrance to the bar, it looked like a mixture of Byron Bay, Bournemouth, New York and Magaluf in terms of appeal. Blatantly geared at the 18 – 30 age bracket, with bar promotions a plenty. Happy, good looking staff, loud music and big screens with a US decor made it almost resemble “Jumpin Jaks” nightclub in Bournemouth (that one, incidentally, trapped in an era and condemned to the same type of dustbin of history that Leon Trotsky once spoke of). 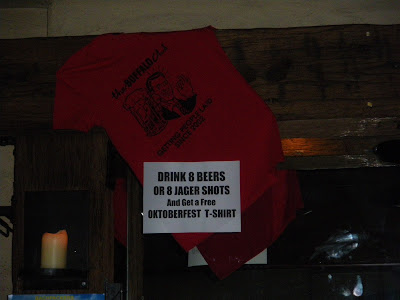 A sign behind the bar drew my attention. Drink 8 beers and get a free t-shirt?? Holy shit, in days gone by I’d have been getting new t-shirts all the time with that type of deal. Especially as the beer is on a 2 for 1 promotion, and they’re not pints here, more like schooners. But for now, it was two beers and a wee jaunt home to the hostel. Times haven’t changed, maybe just I have. Oasis album track Champagne Supernova was played on entrance to remind me of those times, Razorlight track America was played to remind me of John Johnson back in 2006, and to spur me on to my next adventure to the Americas. 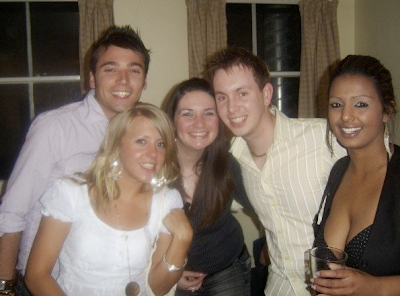 Before I left my mark on Queenstown, I had a flashback moment to my old house in Springbourne in Bournemouth, where sat on the settee whilst a student, myself and my old housemate Steve Compton chatted about his very own New Zealand experience, back in 2003. The bars, the beers, the babes and the bungy jump was what he said about Queenstown. Suddenly I could see Steve Compton stood there at the bar in Buffalo chatting to the babes, necking a shot and celebrating after just having done the Nevis Bungy Jump. (Which is the one to do by the way, at 134 metres, it’s the second highest bungy jump in the world!). My days of bungy jumping and sky diving had passed me by for now, helped of course by the current over-inflated price of these things…I haven’t actually seen Steve Compton for over 5 years now, and should we meet again, I’ll ask him if he was indeed in Buffalo Bar that night all those years ago. 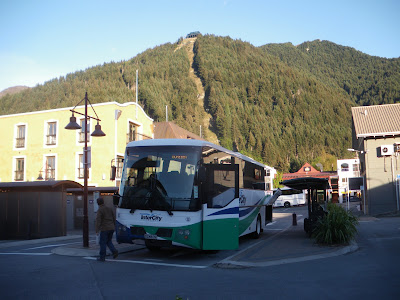 Things seemed to fit together nicely, and by dawn my “naked bus” (New Zealand’s cheap answer to megabus) had driven me out of this wondrous little resort. I won’t shed a tear if I’m never in Queenstown again, but it was nice to be there to see what all the fuss was and still is, about.