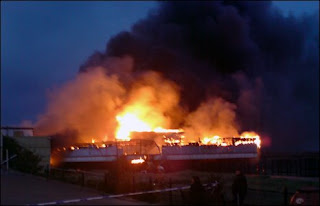 Backpacking in England: Passing Through Fleetwood

Bizarre things happen every now and then. Certainly this time a few months ago, I had NEVER heard of the town of Fleetwood. Then, having started working on ferryboats recently and the fact that I often travel back to Northern Ireland, I decided to get the boat back this week for the Northern Ireland v. Czech Republic match (we drew 0-0 by the way) and when sizing up options on ferries home, I went for the Fleetwood – Larne route. The reasons for this were that it was a new route for me, the sailing times suited and I was also getting some discount on the strength of my Stena Line card, courtesy of my latest job as a ferry steward on Wightlink’s Lymington – Yarmouth route. So I was all booked onto the Fleetwood – Larne ferry and was looking forward to it. Fleetwood is a very traditional northern English coastal town (between Blackpool and Morecambe) on the west coast, facing into the Irish Sea. It has a pier, a beach and is one of the rare English towns to STILL have trams… 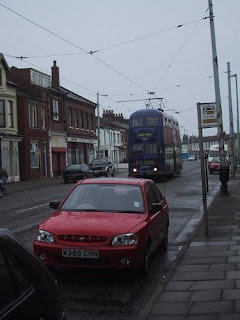 I had a bit of spare time to kill after driving from Stansted airport (having been in Bratislava) and so I arrived very early for the Monday morning 9 am boat from Fleetwood – Larne. I actually arrived on the Sunday night, and managed to change my booking to the 3 am morning sailing. Still, with time to kill and as darkness fell, I drove to the harbour, beach and pier to see what Fleetwood had to offer. Not much on a dark Sunday evening, but a calm cool breeze and a nice pier shone out at me. I took some photos, including one of the pier late at night and I also took a very short video clip. Little did I know that my photo and video could be the last ever of Fleetwood Pier as it was. On arrival back in Northern Ireland I was to learn that the next night (during the night) the pier at Fleetwood was totally destroyed in a fire. I was very surprised at the news, totally shocked and then just thought to myself that I had walked past the pier less than 30 hours before the fire and now it had been destroyed. It’s a funny world, and it all seems a bit surreal looking at the pictures of the enflaming pier. 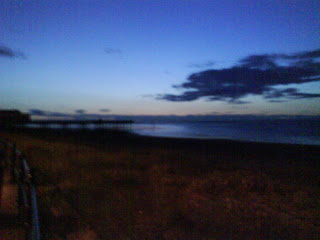 Just a few months back Weston Super Mare pier burnt to its core in a similar fire,, one which I was appalled at, due to the fact that the fire brigade took HOURS to get there and then didn’t even make any decent attempt to put it out, and that’s what they are paid to do!! The same thing happenned at Fleetwood – they couldn’t put the fire out quick enough so its totally ruined. Even in this modern day, you would think these fires could be prevented, or at least put out when they begin. Still, its a chilling memory that I was there for the first time the last night the pier lasted. Perhaps my photo and video are the last taken before the pier at Fleetwood was ruined. The pier itself is by a main beach with ice cream huts and round the corner from the large and 3 star North Euston Hotel. While parked, I enquired about room prices for one person, a single room for the night and was astonished to find the cheapest was £70!! Really? In Fleetwood. I wouldn’t even have paid £70 for Fleetwood Mac for fuck sake. Though I didn’t need the room as Stena changed my ferry crossing to the 3 am anyway, I had just enquired in case. 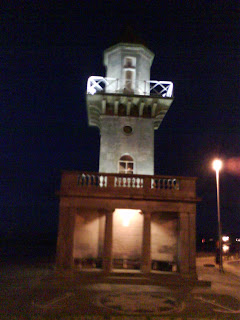 Much better deals were to be had in the hotel bar, where I paid £1.90 for a very cheap bitter, which was nice. I had a few more hours to kill so I walked by the coast for a while and then drove back round the corner to the ferry terminal at Stena Line. A calm, cool breeze welcomed me on my walk. On my drive I was pleasantly surprised to be sandwiched in between trams and driving over tramlines. I love getting on trams, particularly in Eastern Europe where they are everywhere, but to see them in the UK is nice. Fleetwood is one of England’s surviving “tram towns”, there is a link tram to Blackpool from there. I didn’t have time to get on the trams and try them, but it seems like a lovely wee seaside town, still with its tradition. I also popped into Fleetwood’s oldest pub, The Victoria before getting a few hours sleep before the 3 am crossing to Larne in my native Northern Ireland. I’m actually travelling back the opposite way tomorrow as I do the afternoon Larne – Fleetwood sailing. Only this time, strangely and sadly the pier at Fleetwood will not be there, or at least not in its full glory that it was last Sunday. It’s a strange world sometimes… 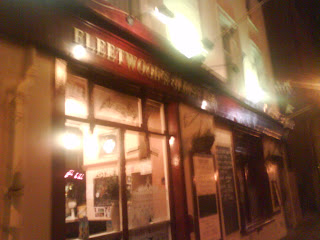 Information On Fleetwood – Fleetwood is a town within the Wyre district of Lancashire, England, lying at the northwest corner of the Fylde. It has a population of 26,840 people as of the 2001 Census.[1] It forms part of the Greater Blackpool conurbation. The town was the first planned community of the Victorian era. For most of the twentieth century, Fleetwood was a prominent deep-sea fishing port, but, since the 1970s, the fishing industry has declined precipitously and the town has undergone economic difficulties. Fleetwood is also a seaside resort, serving as a quiet contrast to nearby Blackpool.

A VIDEO I TOOK BY FLEETWOOD PIER, last Sunday night, 30 hours before the fire: