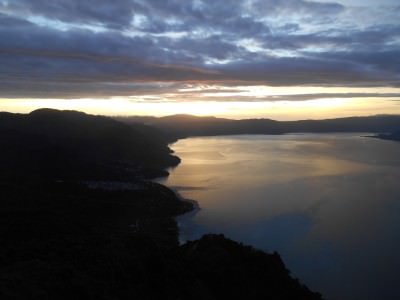 Backpacking in Guatemala: Hiking to Indian’s Nose at Lago Atitlan.

Your backpacking adventure in Guatemala slows you down a notch or two. It’s calm, relaxed and limitless. Except for the time. The days and weeks seem to pass by so quickly and by the time we got round to doing the sunrise hike to Indian’s Nose, we had already been in Guatemala for two weeks though it didn’t seem like it. 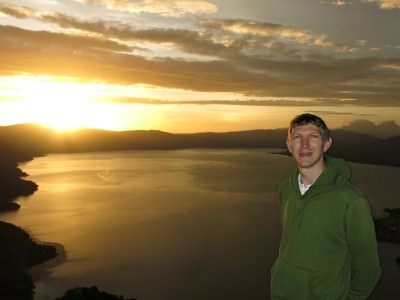 While backpacking in Guatemala for those 2 weeks we had already toured the city of Quetzaltenango to the point where we knew it well and could easily have stayed there to study Spanish. We had also done two crazy and incredible hikes – Volcan Tajumulco (Central America’s highest point) and the full moon hike up Santa Maria. After arriving in the tranquil lakeside town of San Pedro La Laguna, it was time for a hat-trick of hikes to be completed. 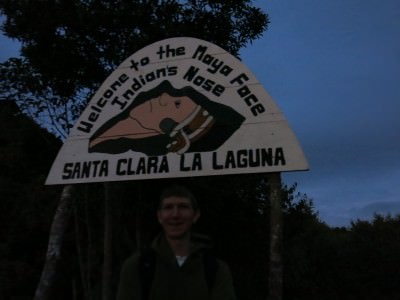 The start of the hike up to Indian’s Nose.

The good news was, this was an easy hike. Up and down for sunrise to a viewing point known as Indian’s Nose. When you look at the landscape at the top of this mountain, yes it does look like an Indian’s face including his nose… 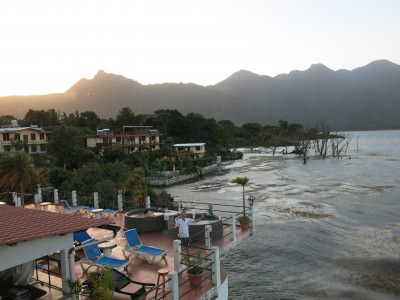 Can you see the Indian’s Nose here?

It’s one of the easier and more famous hikes in and around Lago Atitlan so we were up for it. Here’s the scoop on our sunrise hike to Indian’s Nose, which overlooks Lago Atitlan.

Why is it called Indian’s Nose?
There’s no story, there’s no fairytale. The fact is, from a distance the peak of this particular hill or mountain resembles a person’s face on its side, with the highest point being the nose. Why an Indian has been chosen as the nationality is anyone’s guess. But the name has stuck… 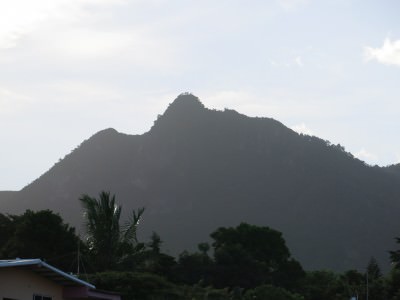 Booking Your Hike Up to Indian’s Nose, Lago Atitlan

In reality you could just turn up and hike it yourself. But I strongly encourage against doing this. Please book with a tour for your own safety. Armed muggings, robberies, getting lost and of course the minimal threat of falling/slipping can all occur on the Indian’s Nose hike. Don’t forget guns and robberies in Guatemala do still happen, so a couple of tourists getting lost in the dark of night to climb up here for sunrise sounds like a bad idea. The good news is, by paying for a local guide, you’ll be completely safe, you’ll make a new friend and you’ll be helping out the locals by paying money for it. So my advice is book with a tour guide. 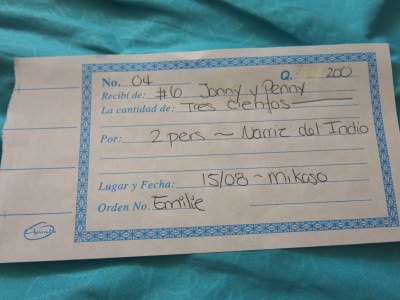 We went with Guatemala Sur Mesure.

Which Tour Guide Should You Use?

While you’re staying in and around Lago Atitlan you will see a LOT of tour companies around and the prices for the hike will vary. You’ll get quoted anything from 50 – 200 Quetzals depending on the guide, the company, the amount going and any other circumstances which might affect the price. We paid 200 Quetzals for 2 people in the end. So how do you choose which one to use? Well we were staying at the quite stunning Hotel Mikaso in San Pedro La Laguna and got a tip off from the receptionist about a local guide called Elmer who is a tour guide and runs a mini hiking company in and around Lago Atitlan. We loved Elmer as he takes life at his own pace, he’s a chilled out guy and there was the bonus of coffee at the top of the hike! 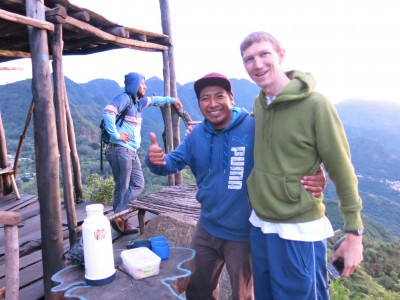 With my guide Elmer from Guatemala Sur Mesure.

While the other groups simply sat and watched the sunrise, we enjoyed it with a hot cinnamon coffee from Elmer’s flask. Here’s the details on Elmer Gonzalez, who I’d recommend booking with:
Elmer Gonzalez, Tour Guide
(502) 5015-9028
http://www.guatemalasurmesure.com
[email protected] 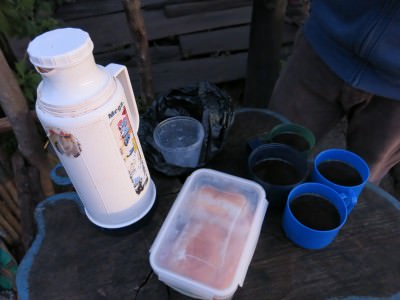 Coffee for sunrise at the Indian’s Nose.

Preparing for the Hike up to Indian’s Nose
I’ll admit it – we were over prepared and we carried way too much, BUT that doesn’t mean to say you should neglect the things you might need. We had ponchos, umbrellas, gloves, hats, scarves and an extra coat. We didn’t use any of them. Our previous two hikes in Guatemala had been to Santa Maria and Tajumulco and both were freezing at the top so we had expected more of the same. 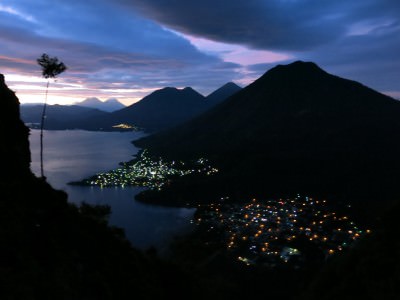 It gets quite hot on the sunrise hike up to Indian’s Nose.

On the way up to Indian’s Nose however, I had to take a jumper OFF as I was too hot. We were there mid August so that might affect the fact that we didn’t get cold. Aside from that the obvious stuff – water is essential, a light snack will help and without a torch/headlight you won’t go far in the dark! Get an early night the night before if you can – you’ll be up at 3am to start the sunrise adventure. 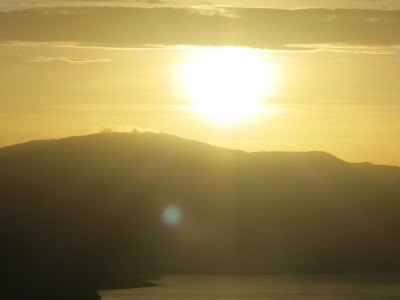 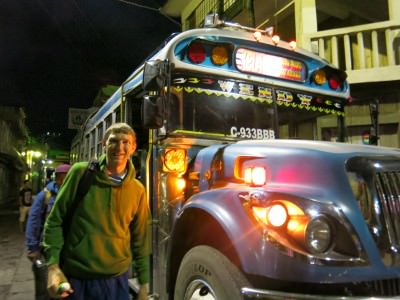 Getting on our chicken bus in San Pedro La Laguna.

Santa Clara La Laguna to Indian’s Nose
We walk through a low lying forrested area first which has corn fields on either side. It’s an easy walk and not even strenuous compared to the two mega hikes we have just done. We have one very short break on the way up and are at the top by 5am. Awaiting the sunrise. Here are a few photos from the top. 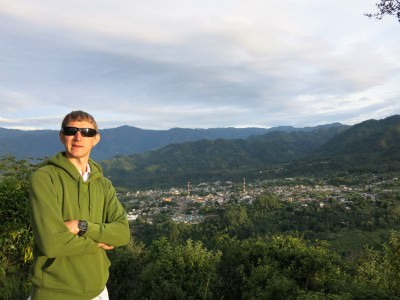 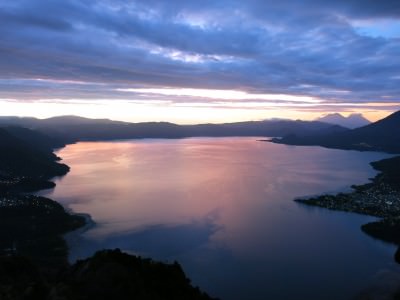 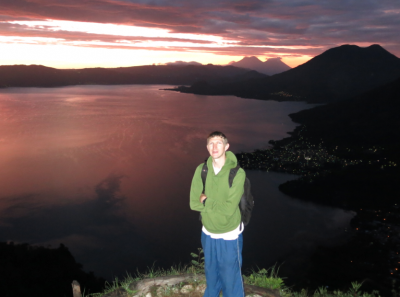 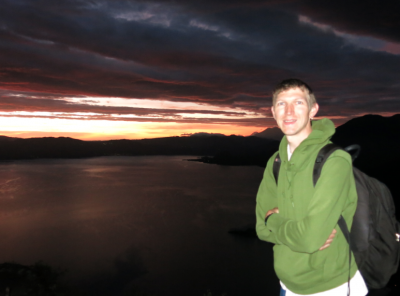 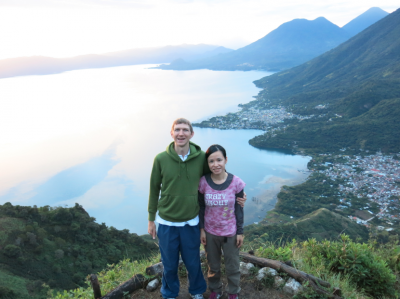 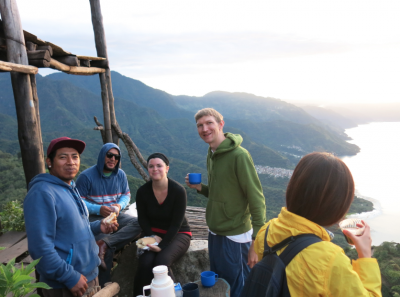 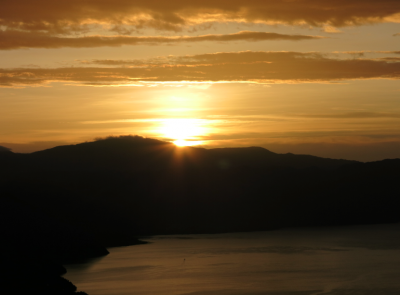 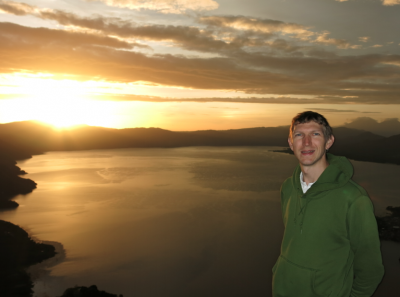 Heading Back Down
The way back down was easy with some decent views and a walk through a corn field. 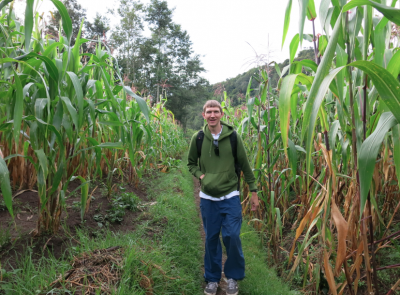 Corn field on the way back down.

After arriving back in Santa Clara we caught a shared mini bus ride back to San Pedro La Laguna. All in all well worth the trip to Indian’s Nose. 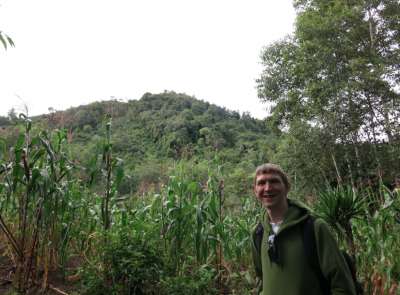 View from the bottom

You normally see my videos on these type of posts, and I made 6-8 videos on the hike up. However after getting back to the Hotel Mikaso, I swapped memory cards and then got into the hot tub with the memory card in my pocket. I attempted to recover the videos but was left with 2-3 second clips, here they are anyway!