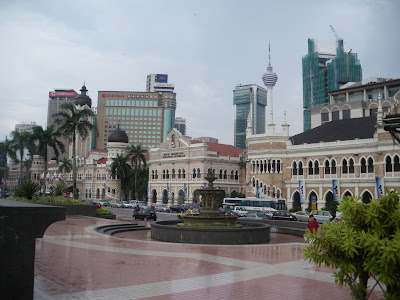 2009 saw my second trip to Kuala Lumpur, but in reality my first. I say this because I had stopped in Kuala Lumpur, Malaysia before, back in 2007 on my whirlwind world tour. My aeroplane from Auckland (New Zealand) would arrive in Kuala Lumpur (Malaysia) and I would stay there for only 8 hours before catching an onward flight to Beijing (China). As ironic as life is, I ended up going the opposite way this time, and via two countries with “links” shall we say to the same places. That is to say that in 2009 Malaysia became the inbetweener sandwiching Taiwan to Australia (with the bonus of a short stay in Singapore thrown in for good measure). I left the airport this time and actually got to see Kuala Lumpur properly and have been back a few more times since! 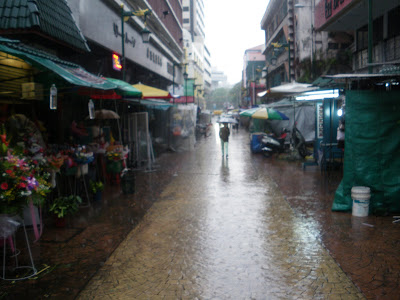 On arrival at Kuala Lumpur airport we didn’t have time to hang about and ended up on the next direct train to Singapore. These trains get busy (this one was full, and came from Bangkok) and it was lucky I booked online in advance. More on that journey and the days in Singapore elsewhere, but for now we are back in Kuala Lumpur. We stayed at Wheeler’s Guest House near Pasar Seni. It was just Natalja and I in our wee room, although English Niki who we met earlier in the day. We spent a day (or almost) in Batu, discovering the Batu Caves . The rest of our time in Malaysia (except those two long train journeys and a stop at Gemas) would be spent in the capital city – Kuala Lumpur. 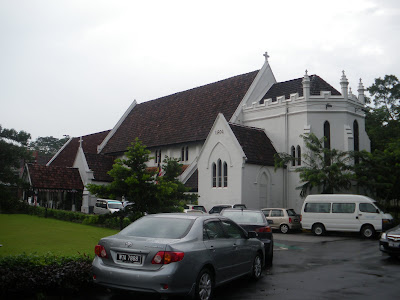 First impressions of Kuala Lumpur was smelly, grotty, dirty yet with some style and character. We stayed in the Pasar Seni area of the capital city. Our hostel was superb – Wheeler’s Guest House at 131 – 133 JL Tun HS Lee Street. We were on the third floor up, in Room 211. The area was near Chinatown, the streets were smelly and grotty anywhere near the polluted river. Before I go on and on about the smellyness, pollution and odours in Kuala Lumpur City, I must admit they didn’t distort my opinions of the city itself, in the end. There are the obvious sights to see in Kuala Lumpur – the Communications Towers, the Petronas Twin Towers, the Sultan Abdul Samad Building and the Old Railway Station. The rest you make it up as you go along – it’s a strange city – with a very diverse appeal. 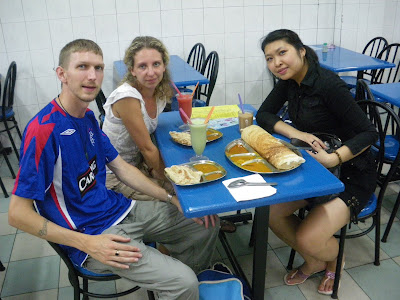 We met up with quite a few people there – not just from the hostel – but Niki Whitley from England joined us for a day while she waited on her onward train to Thailand (and then she was flying to India). We also met up with the delightful, typically Malaysian Angel (a friend of Natalja’s from her time working in the boring Carlton Hotel in Bournemouth). I must say that Natalja seemed dis-sinterested in sight seeing in Malaysia, and ended up spending a lot of time in the internet cafe. Perhaps she found the city a bit dirty. I often took strolls on my own past the river. 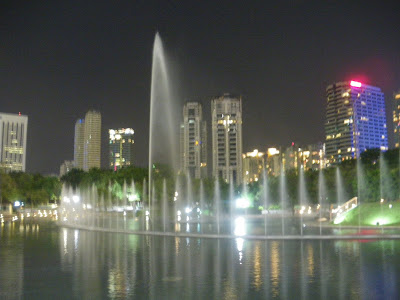 On our side of the river there was the KLCC (Kuala Lumpur City Centre) area – basically the area where all the business is, and where the Petronas Twin Towers sit. I will write separately about the visit to the Twin Towers. It was strange getting the underground from Pasar Seni to KLCC, as the difference in the two areas was something shocking. Was this really the same city? From Pasar Seni’s pollution, smells and old fashioned streets and roads to the much richer area full of designer shops, clean fancy modern buildings and western appeal of KLCC. There was quite some contrast. I enjoyed both parts in equal measures. In the KLCC area, nice fountains, gardens, hotels and trees lined the area around the city’s central attraction – Petronas (named and owned by a local Petrol/Oil company). 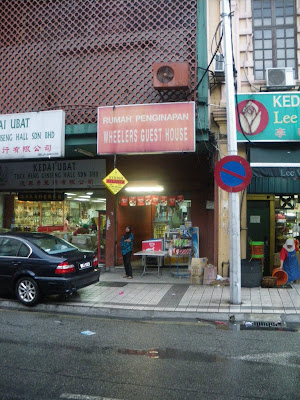 It could actually be an anti-climax this city, you know. Its almost as if I’m running out (for once) of things to say about it, despite the fact I liked it. We didn’t go into any museums. We visited the National Mosque (a pretty light blue roofed building) and the Pusat Islam. In the same area was the big National Post Office (Pejabat Pos Besar) by the river, plus a number of interesting buildings. This included the old Train Station (which was under re-construction works) with its arty domed corners and British design. It also included, on this street, called Jalan Raja Laut, the Cathedral (of Mary The Virgin), a Park with tonnes of Malaysian flags on one side, and some important government buildings alongside. This area was called the Dataran Merdecka. It was opposite the eye catching Abdul Samad Building (one of the “must sees” in KL). The Cathedral was an Anglican one, and as the oldest church in KL, began as late as 1887! There is also an English style Tudor building which is the Royal Selangor Club. I won’t deny that this particular area of KL is pleasing to walk round and look at. 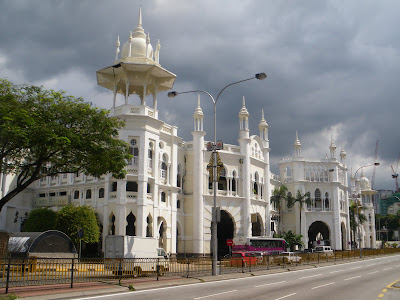 Kuala Lumpur was roasting, but we also experienced two massive thunderstorms while there. We also visited the old “Central Market” and Chinatown areas. I bought nothing in either place, they were over priced and tacky souvenirs and local nik naks. Certainly for a light traveler I don’t want to be picking up extra stuff! What I did notice was the amount of job vacancies inside the shopping centres. Just for shop assistants, I was fairly tempted to take up a job offer there and stay for a few months. I could easily have lived there for 3 months, perhaps the city would grow on me. The people were friendly, even though the streets were smelly. Having previously been in Taiwan and Singapore, Malaysia seemed, to me anyway to be the dirtiest and least hygenic. 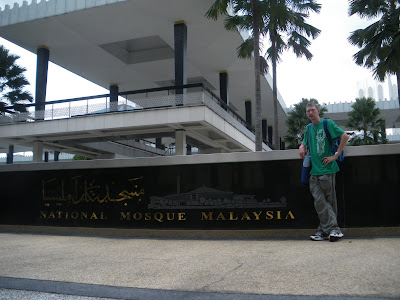 We had time for a night out with Angel while in KL. She finished work around 7 and met up with us at 8pm at Pasar Seni Station. She took us on a quick tour of the city centre, past the lit up Twin Towers at night, past the convention centre, aquarium and gardens with pleasant fountains. Angel had a typical Malaysian style. She took us out for dinner/supper at one of the nice restaurants – “Yusoof Dan Zakhir Sdn Bhd” restaurant near Pasar Seni station. There we ate traditional Malaysian dishes. Angel ordered for us. What we had was known as Roti Canai. It was basically a large pancake, which you rip bits off, dip them in fish curry, chicken and also a spicy liquid which has yellow bean, carrot and potato in it. This was all served on a silver tray. I loved it. It was one of the nicest suppers I’ve had – its beats the British and Australian food any time and rivals the Taiwanese dishes. With it, on the drinks menu I really fancied a Dragon Fruit Juice Mix. But they had no Dragon Fruit left…so I had to order the Guava. A beautiful fruit drink. I really enjoyed it. It was also written in English on the menu, they were known as “Ice Blended Smoothies” by a company called Enjoys. Angel herself had a different style of pancake called Thosai. I sampled a bit of that as well. The meal wasn’t too dear, I cannot remember the exact price, because Angel paid for us both as a treat and a thank you for sampling Malaysian cuisine. Eating out in Kuala Lumpur wasn’t actually too dear – we ate out a total of 3 times. Sampling Malaysian, Chinese and European food. 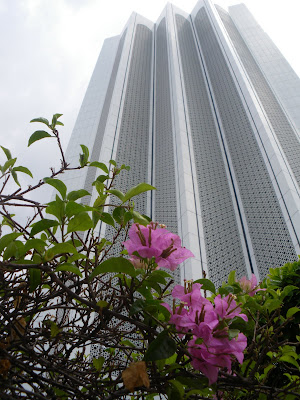 On our final day in Asia, we checked out of the hostel at 10 am, but left our bags there. We sorted out a few things such as the next hostel was booked for Sydney (I chose randomly the “Chilli Blue” hostel), Natalja posted some stuff back to the UK (mainly clothes – it was cheap to post back), I sent my usual postcards. I later took some time to finish off the sightseeing on my own, after we had lunch at the Reggae Bar opposite the hostel. They had free wireless internet there (always a bonus) so Natalja went online while I finished off the sightseeing in torrential rain. I managed to visit a Mosque and a Temple, the Sin Sze Si Ya Temple near Masjid Jamek station. In the downpour I got soaked through, which made me happy. After 6 years of England and 3 weeks of Asia, it was nice to finally feel at home with Northern Irish weather giving me a fresh chill as I sauntered down random streets as the only blatant tourist. I enjoyed it. 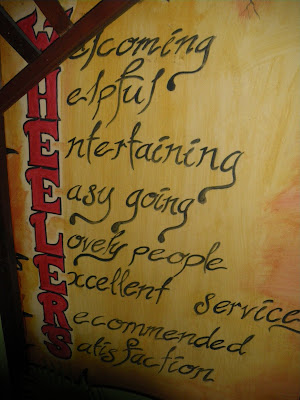 I’ll finish off the Kuala Lumpur post by mentioning the night out as well – we went to the “Beatles Bar” (brilliant – I Know) for a full on night of karaoke and comedy and also the Reggae Bar. The Reggae Bar had live Champions League football – I watched Manchester United play in Europe there, supporting Jonny (same name as me except he cheats – unlike me his full name is Jonathon!) Evans (of Northern Ireland) who was playing well. I sat outside in the heat and watched it on the live screen with two Man United fans – real Man United fans – former Stretford End season ticket holders Mick and Ross. Their football knowledge was excellent and they talked about Norman Whiteside and George Best to me. They had also both been at Windsor Park back in September 2005, the night that a 74th minute David Healy strike gunned down the arrogant posh England team, in a 1-0 victory for Northern Ireland. Man United drew 0-0 with CSKA Moscow that night. In that bar I also met a French guy, who was staying at our hostel. The Reggae Bar inside was buzzing and there were a lot of local Malaysian girls dancing and shaking their bodies about. One of them touched me up a few times while I stood at the bar. I didn’t seem to get horny or excited however, even when she showed me part of her boobs. I just turned and walked away. Love changed me. There is and always will be only one lady in my life, and if you know me, you’ll know who that is. 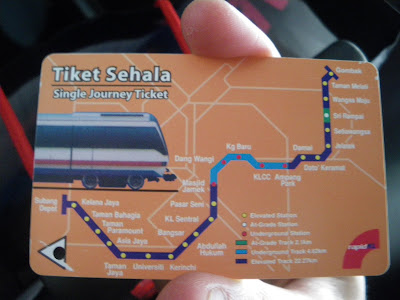 Anyhow with thunder and lightning in the sky, we packed our bags and were headed out of Kuala Lumpur, Malaysia and Asia. We first boarded the underground from Pasar Seni to KL Sentral and then bought our tickets for the KLIA Ekspres, which is the 28 minute fast service direct to the airport. We had 17 minutes to spare at KL Sentral and one of Natalja’s bug bears came back – for some reason she loves McDonald’s, Burger King and Subway. I hate all 3 and only use them in emergency, but this time she twisted my arm and we had a Burger King. Over a greasy unfamiliar burger I said “lets get the f**k out of Malaysia shall we?” And that was that. A beer on the train, quick cup of tea at the airport, a red passport stamp and a large 747. And we were gone. As crazy as it sounds the next stop was Sydney, Australia…the land down under. 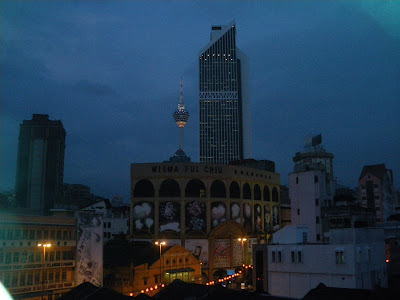 ARRIVAL IN KUALA LUMPUR, NEAR CHINATOWN: