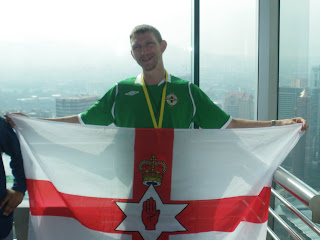 In 2007 I sent my kid brother Daniel a postcard from Kuala Lumpur, the postcard contained on it the Petronas Twin Towers. On that occasion I was stuck in Kuala Lumpur airport and sent the postcard as a gimmick, the “towers I didn’t see” because I didn’t have time to leave the airport. Fast forward to October 2009 and suddenly I was actually properly in Kuala Lumpur and I was going to go up the Twin Towers of Petronas. 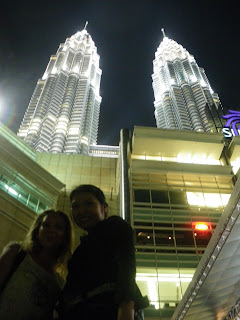 You cannot go up the Petronas Twin Towers at night, unless you work there, as there is a limit on the number of members of the public per day, and all the places are normally gone by lunchtime. We saw them at night and in day though. At night they look superb, adding an artificial elegance to the Kuala Lumpur sky line. Hard to believe that a city like this can contain such amazing buildings really. Although the Petronas Twin Towers themselves are in an area known as the “Golden Triangle” bang in the commercial heart of Kuala Lumpur. They are, as a couple, the highest twin towers in the world. We walked around them at night, Natalja, Angel (Natalja’s Malaysian friend) and I. We also went inside and walked through the downstairs part, which is basically a glamorous shopping centre, with designer labels. 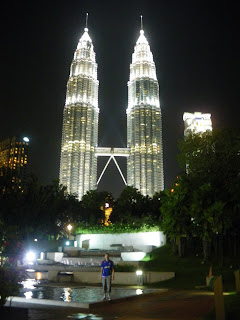 The plan then was to get up early, join the queue and go up the Petronas Twin Towers the next morning. Basically the first group of people get let up at 9.15 am every day, and there is a limit of 40 per visit and something like 200 people per day. Basically you need to queue from around 7.30 am to stand a chance of being in the first 200. I had 2 hours sleep and got up keen to go and do it. Natalja, being sleepy and lazy (she loves to lie in, I love to get up) decided to stay in bed at 7 am. Up I got, headed to Pasar Seni underground station (a 6 minute walk from hostel) and boarded the train to KLCC station, which is right underneath the twin towers. 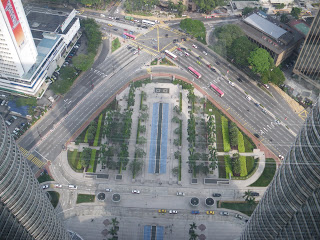 I got out of the train and headed into the shopping centre. The place was dead. A few businessmen in suits walked around holding morning coffees. It looked a bit like a quiet London actually. Inside the shopping centre there was an obvious exit signposted as “Sky Bridge”, which is the part of the twin towers you go up to – the bridge that basically joins the two towers half way up. This is as far as the public can get. I went down an escalator to find the queue already in place. I worked out where the end of the queue was and joined, I think I was in the first 50 people there. I was guaranteed to get to go up the twin towers that day. Within 10 minutes of me joining the queue it had doubled! its worth getting there for 7.30 am, as I had done. 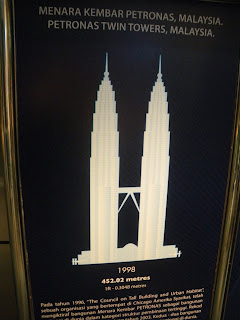 Behind me in the queue was Max, from Hamburg in Germany. He was doing a bit of traveling on his own. He had been to Northern Ireland before, and I had been to Hamburg back in 2007 so we chatted away during the time long queue. Soon the time had passed and we were confirmed to be in the 9.30 am slot, the second slot of the day to go up. The best thing about going up the twin towers is that its free! No fee, we just got a wee ticket on the way in, these are then swapped for a yellow necklace/tag before going up. Once you get through and get your tags, there are three more things before you actually head up. The first of these is a small “museum”/ room with information on the towers and the history in it. 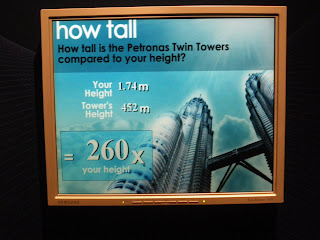 In this museum type room there was also a place which tells you how many of “you” is the same height as the Petronas Twin Towers. You would need only 260 Jonny Scott Blairs to equal their height. Fascinating! After that you go through security where they check your bags etc. After what happened in New York on September 11th 2001, its hardly a surprise. These are twin towers too. Once through security and with my yellow pass round my neck, we were whisked into a room to watch a short film before going up the twin towers themselves. You had to wear these ridiculous sunglasses, but i enjoyed it anyway. Its was a 3D film and looked realistic, as an introduction to the experience of going up the Petronas Twin Towers. Our guide for the day was a typical Asian guy, with dark skin. He was dressed in a purple robe and led us then into the lift on the way up. He gave us facts and figures about the building and details of the visit – the fact we only had 10 minutes of time on the actual Sky Bridge. It was to be savoured and enjoyed! 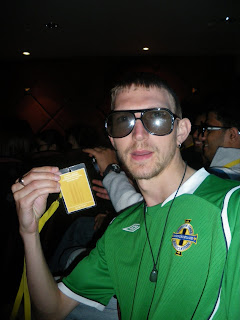 It was a clear day – the sky was fairly bright with a bit of cloud or an overcast (which would mean rain later that day), but we could clearly see out into the city. I seemed to have made a habit of doing the stupid obvious tourist thing in big cities – going to the top of the city’s biggest building. This time it was free so it was a bonus. The following highest/tallest buildings I have been up before:
Scrabo Tower – Newtownards, Northern Ireland
Spinaker Tower – Portsmouth, England
CN Tower – Toronto, Canada
Empire State Building – New York, USA
Sky Tower – Auckland, New Zealand
Taipei 101 – Taipei, Taiwan 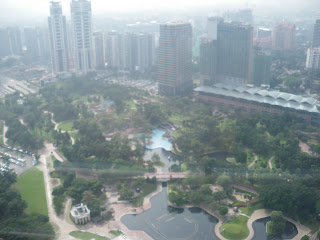 Name dropping just a few of those, and here I was again. This time it was a bit different though, as I wasn’t strictly “at the top” of the Petronas Twin Towers. Though I was as high up as a member of the public could go. The Sky Bridge actually links the two towers together, and is about half way up the buildings. Its on the 41st and 42nd Floor, and you feel like you are floating. Nothing holds it up in between – simply a bridge between the two towers. Our guide also told us that it moves ever so slightly from side to side. You could feel that as well. As we walked onto the bridge, the previous group (the very very early birds) were just leaving. We had 10 minutes. We took all the photos at the start. 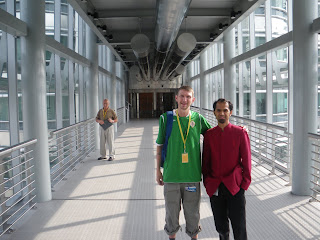 I got my usual mix of photos of me on my own, some with my Northern Ireland flag, some scenery shots, some random shots and me with a few others. I hung out with Max for the most part. A few Malaysians also posed for photos of us. But soon our ten minutes was up. And that was that! 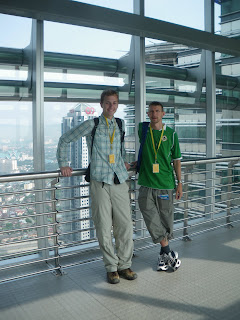 I said goodbye to Max, said I’d be in touch via e-mail and off I went back to the hostel. When I returned back at the hostel, at 10.30 am, Natalja was still asleep, she hadn’t budged an inch! She had missed the chance to see Petronas Twin Towers, on our last day in Malaysia! While backpacking in Malaysia, we also visited Batu Caves.
What – Sky Bridge, Petronas Twin Towers, Kuala Lumpur, Malaysia
Where – The Golden Triangle, near KLCC underground station
How high – 452 metres
Cost – Free 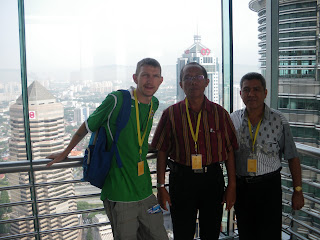 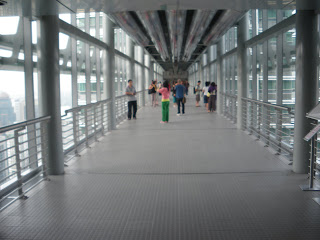 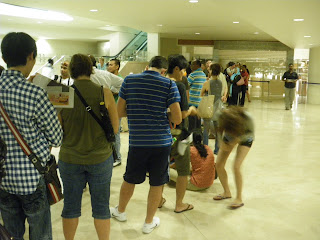 AT THE BOTTOM OF PETRONAS TWIN TOWERS BY DAY:

AT THE BOTTOM OF PETRONAS TWIN TOWERS BY NIGHT:

IN THE QUEUE ABOUT TO GO UP PETRONAS TWIN TOWERS:

ON THE SKY BRIDGE UP PETRONAS TWIN TOWERS: