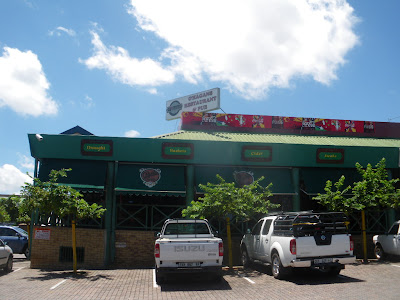 After a stop over in the city of Nelspruit – albeit to leave people off at hostels and hang around in a shopping centre car park, the final leg of my African experience of 2011 was upon me. I had been lucky to get to visit an Irish Pub in Nelspruit, O’Hara’s where a fresh Guinness set me off nicely on my journey back to Johannesburg, where I had booked into Brown Sugar backpackers hostel. On this part of my trip I was travelling with Baz Bus – a very touristy backpackers style bus journey. I used them to get in and out of Swaziland, and for this journey back to Johannesburg. 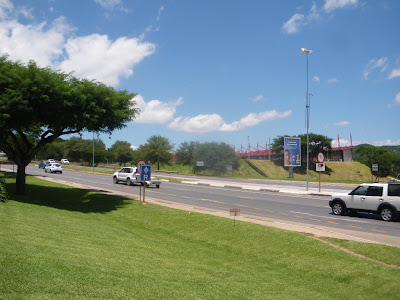 Nelspruit, Or pretty much all I saw of it! 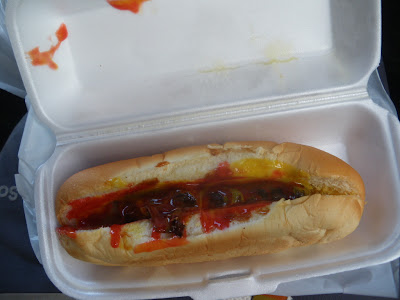 Lunch was bought at Nelspruit but brought on board. A spicy hot dog. 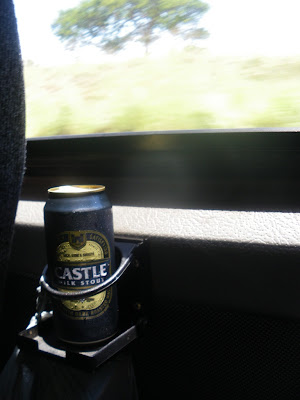 On these epic journeys through African countryside, a wee beer, my iPod and often my notebook would have me smiling to myself as we passed random fields, towns and huts. 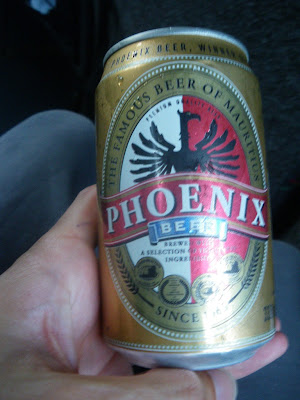 This beer, Phoenix is actually from Mauritius, it was the first time I had bought it. But I decided to keep it for later that night, when I would truly relax in the hostel in Johannesburg. 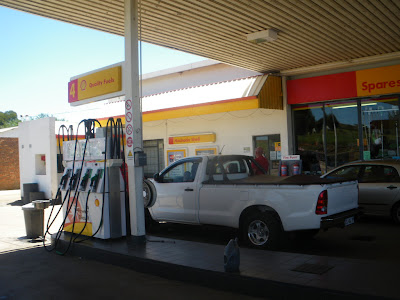 We stopped off here for petrol just west of Nelspruit. It was Machado Shell and I had followed my map knowing we had passed by Waterval Loven and Machadodom.

This map shows our route from Nelspruit to Johannesburg. Well roughly, by mid afternoon we had passed Emgwenya and I knew that Belfast was coming up next. The rest of the bus would have been baffled by my excitement of driving past Belfast, seeing a sign for Belfast or even stopping in Belfast. Belfast is the capital city of Northern Ireland, and the city where undoubtedly I have spent more time than any other in my life (counting Bangor, Newtownards and Bournemouth as towns that is). Belfast is home and I just wanted to see what South Africa’s Belfast would be like. The previous year I had been in Belfast in New Zealand. 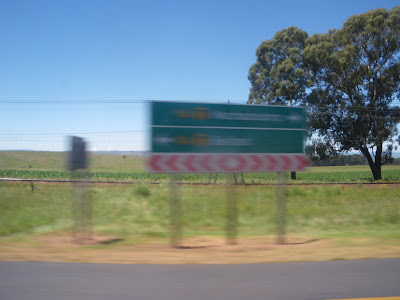 Clutching my camera, I spotted a few signposts with Belfast on them, and tried to capture them on Kodak. The above Blur says Belfast on it. We must have been within miles of the city. 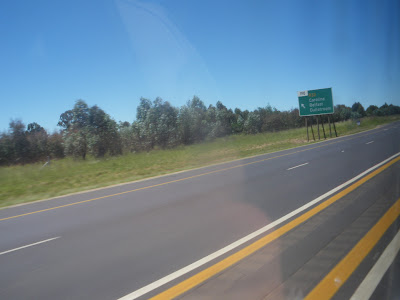 Yet sadly we were on a main carriageway which would be by passing Belfast so I didn’t actually see any of it. The above mention of Belfast on that green sign being as close as I got to South Africa’s Belfast. And just to confuse us even more, South Africa has TWO Belfasts (just like Tasmania has TWO Bangors!) – one here at Mpumalanga and another at Limpopo. A petrol station and some countryside near the Highlands Meander served as my alternative to seeing Belfast. I sipped my beer and didn’t ponder on it too much. Going to Belfast would merely have been a bonus. I was happy to be heading back to Johannesburg. Here’s what Belfast would have looked like: 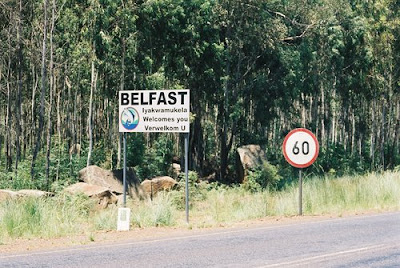 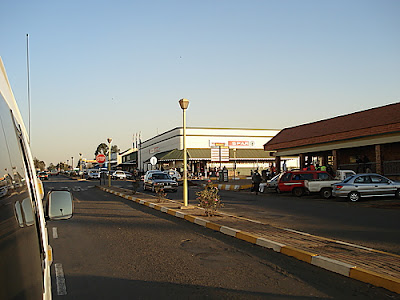 Downtown Belfast, kerbstones painted yellow and white here, a contrast to those in Belfast in Northern Ireland. Of course that’s where the name came from. Here’s a wee bit of information on Belfast in South Africa:
Belfast or Emakhazeni is a small town in Mpumalanga Province, South Africa (not to be confused with Belfast in Limpopo, South Africa.)
The town is renowned for its excellent trout fishing conditions. Sheep and dairy farming take place here as well as maize, potatoes and timber are produced. Coal and a black granite are mined around Belfast. Around 6 million tulip bulbs are produced here annually for export; the flowers are discarded. Belfast is 2,025m above sea level and one of the coldest and highest towns in South Africa.
It was named after Richard Charles O’Neill from Belfast, modern Northern Ireland, who owned the farm on which the town was built 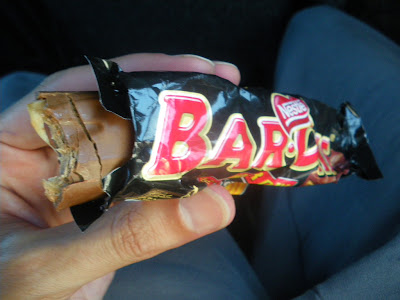 But Belfast like many things in life, was left behind me as my bus strolled onwards. On the bus I enjoyed one of these chocolate bars – an alternative to a Mars bar – very similar. At a fork in the road, the more northern fork went to Pretoria and the more southern one to Johannesburg. At one point, we thought  we would be heading to Pretoria (where I’d already been) to drop a few passengers off. But at the fork (near a place called Witbank), the only black passenger on our bus got off. You could tell it was a touristy bus. Our driver, the very friendly guy Armstrong was also black. It may seem odd that I comment on it, but remember this is a country that has been through so much in the past. Here on my bus, a black driver and a black passenger were noticed. The rest of us were tourists, and I chatted freely to a lovely young Welsh girl, who was the only other passenger heading to Brown Sugar Hostel that night. 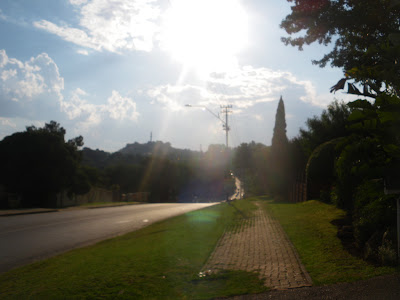 We arrived in Johannesburg pre sunset. I’d estimate around 6.15 pm. A gorgeous sun sweeped down on the district of Obsservatory. I can’t remember why I chose to stay here in Observatory, probably the name “Brown Sugar” shot out at me. The church spire above being my first impressions of Observatory. 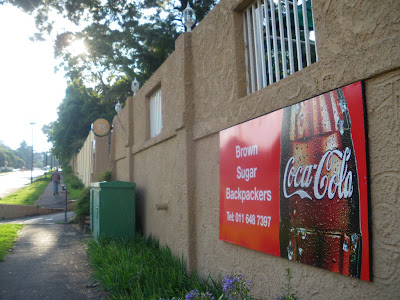 The added advantage of travelling by Baz Bus is that they drop you off at your hostel, so the Welsh girl, who I learned was called Anwen Victory, and I got out here on Observatory Avenue where we checked into Brown Sugar Backpackers (sponsored by Coca Cola allegedly!). 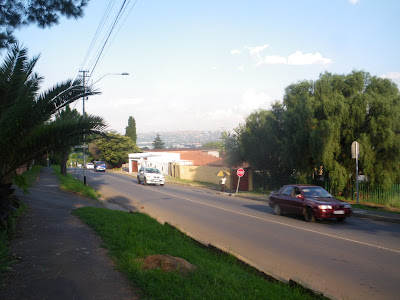 Johannesburg lies in the distance, seen from the front of the hostel in this photo. We are on the east side of the city here. Johannesburg as you’d imagine is a city with many sides. I visited Central Joburg, Melville, Observatory and Ormonde while in and around the city (not including my lengthier stay outside the city at the famous Soweto suburb). The name of the area or district would be obvious then – Observatory – a look out place on hills looking down into the city. That night I’d have a walk round the local area, relax in the hostel bar with my Phoenix and chat at length to the Welsh lady Anwen Victory. 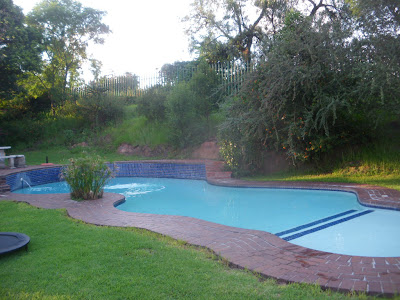 Oh and there was a swimming pool in the hostel too! 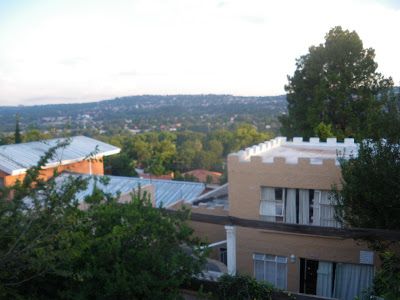