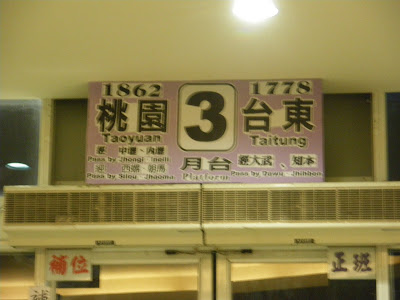 Backpacking in Taiwan: Taidong, Hualien and bus tripping up the East Coast

It was an early start, or a late start depending on how you look at life. We stayed up all night until a 5 am sleepy bus left the south western city of Kaohsiung for a trek across the island to the eastern city of Taidong. It was part of our trip up the East Coast on route to Taroko Gorge, or Tailuga as it will be called for the most part. There is something strange about pronouncing Taiwanese places in English. What is pronounced “Taidong” is spelt “Taitung”. What is spelt and written in guide books (and even at the venue) as Taroko Gorge is actually pronounced “Tailuga”. Ask a local where Taroko Gorge is and they’ll look at you as if you have 2 heads. So the trip to Tailuga began. A scallion cheese roll was had for breakfast with a iced tea on boarding the 5 am bus direct to Taidong. From Taidong we knew it would be either another bus or a train to Hualien. At any rate it was time for sleep. And we got some as a comfortable bus twisted its way through southern mountains, and cities of Donggang, Fangliao and Tawu. iPod REM was in use again, the vintage tunes from the early 90s made me a daysleeper yet again. Less a case of the sidewinder sleeps tonite, more the hat-trick of people sleep in the day on a rocky bus. It was me, Eva and Natalja on this trek, Neil was working. 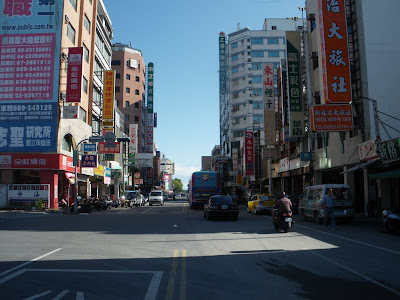 Soon we were awoke bang in the middle of a main street in Taidong. The city itself, small in my eyes, and not as busy as the previous few ventures. It was 9 am on a Monday morning. The exact quote from the Lonely Planet guide on Taidong reads “there aren’t a lot of reasons for the short term visitor to make a long stop in Taidong”. Its biggest attraction a well structured bridge on the edge of town (which we didn’t even see as the bus didn’t go that way) so a short video was made in Taidong by the tourist office and a “square” where buses congregate but seemingly go nowhere. We lasted 1 hour in Taidong. 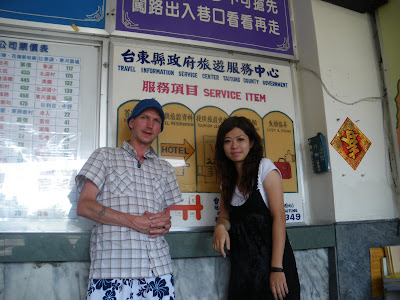 The option of getting a train to Hualien had now gone, as it was quite a distance to the train station, and would have added to the time and effort. From the second bus station, which Eva took us to, we got booked on and waited for the next bus. It wasn’t direct to Hualien, we were meant to change somewhere near Andung (that never happened) and then another bus to Hualien. At this bus station I had time to get changed and cleaned in the toilet. It smelt of year old piss and old men shaved there, leaving grey hairs a plenty in the tiny sink where my colgate was a Godsend. I was fresh and ready for the next part. The girls relaxed and rested. I also popped into the tourist information centre and found a free postcard as a souvenir and a booklet which proved that a bridge was indeed the best tourist attraction in the city of Taidong. 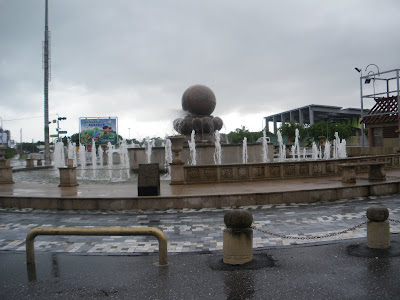 The bus to Hualien was pretty empty and full of locals who looked at us like we were aliens of westerners just stepped off a space shuttle from the moon. So on this second bus, there was much less comfort, tiny seats (4 per row rather than the previous 3), but yet some nice scenery and much more coastal and local. The bus seemed to be a local bus doing a longer route. It stopped everywhere for locals to get on and off with their shopping and their stories. I noted the locals were mainly over 40 years old. We passed unknown towns and for some reason I felt it looked like Peru! I’ve never even been to Peru, but watched a few documentaries on it before. The atmosphere on the bus and the scenery reminded me of it. The houses and living conditions also seemed quite poor. 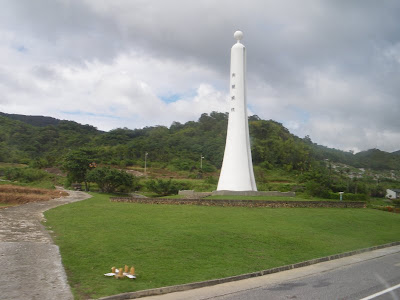 I hadn’t noticed as poor an area as this since I’d arrived in Taiwan. I listened to my iPod quite a bit and didn’t really sleep. The girls slept quite a bit, especially Natalja. The second bus was much less comfortable and also began to get a bit rocky, the roads were narrow, winding and cracked. But this bus became the scenic bus. We saw the Tropic of Cancer monument on the left hand side as we passed across the tropic. We saw countless roadside shops and houses, the odd temple, some beaches and some rocks. The weather was sunny on this part of the journey. We were not entirely sure where the bus was going though. Even Eva wasn’t sure. We had hoped it would take us all the way to Hualien, yet the ticket office had told us it would stop at Chinpu, and we would need to change buses to get to Hualien. 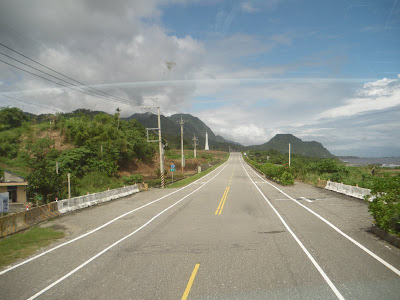 During the journey I often looked at my map of Taiwan trying to guess where we were. We passed through the city of Chengkung, but I also had reckoned we passed Chinpu, without stopping which I said to Eva. She checked with the driver at this point and we were stranded somewhere on East Taiwan coastal wilderness. I guessed the city was called “Shihtiping”, but Looking back we think it was actually the small village of Dagang Kou. The bus driver stopped the bus just for us, and suggested we transfer at Dagang Kou onto another bus, which was literally just behind us. He waved the driver of that bus to stop. I woke Natalja and across we went onto another bus. This bus was definitely bound for Hualien, and we were in for a rocky ride. The weather and the road conditions were changing. 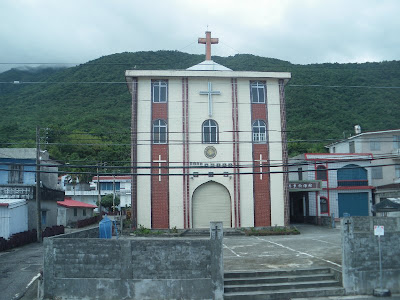 Suddenly we found the bus slowing down, then rocking from side to side. Perhaps one of the videos below will show the conditions. It was in the aftermath of the typhoon, the rain and thunderstorm had hit the East Coast and outside floods made the road slippy and we were on a very very long and winding road. Yes, the Beatles made it onto my stereo that day. It was easy to sway off your seat, it was surprising how Natalja remained asleep for most of it. Neil also called Eva’s mobile this time to check everything was OK with us, because none of us had mobiles we weren’t even sure we would meet Eva the night before as it was all last minute organisation. 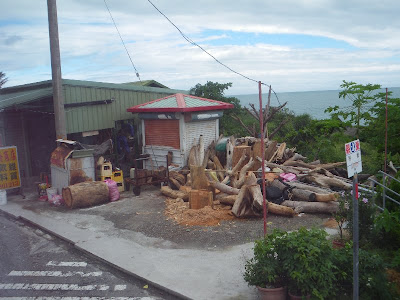 For the next hour or so we were up and down winding roads and corners, through thunderstorms and rain and it seemed like forever before we would finally reach Hualien. And Hualien is a big city on the East Coast. I had hoped to see some of it on the way through, as we had to change buses and normally this allows me time to have a quick walk round, see the sights and maybe buy a souvenir. But still, it was a great experience and an exciting bus journey, we were now on our third different bus, and we knew the dreams of seeing Tailuga or Taroko Gorge were still alive. 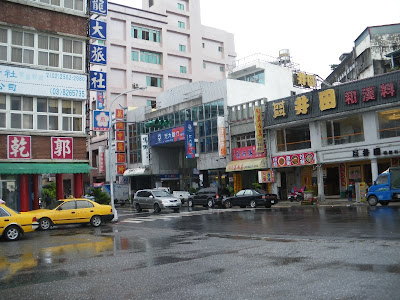 It didn’t even look remotely like a city when we entered into “Hualien”, even the sound of the name is less Taiwanese than our previous ventures. But amid pouring rain that Northern Ireland would be proud of, our long rocky bus finally came to its end, by Hualien Main Bus Terminal. It also appeared to be opposite a train station, and we then had to sort out our tickets for the next….and final leg of the East Coast tripping. Our fourth bus would leave Hualien and be bound for the massive national park area of Taroko Gorge, or as I’d learn to call it Tailuga. 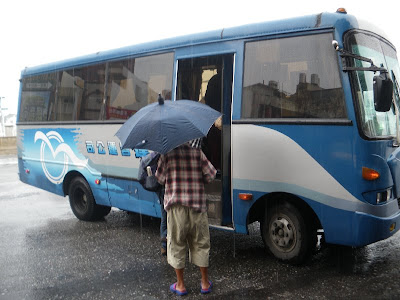 A spinning black ball and a fountain, coupled with locals scared of rain was all I saw of the city of Hualien. It was a slight shame, but aside from its coastal views and entry into Tailuga, it hardly sells itself on tourism. That wasn’t the point. I’ll go anywhere and see anything. It doesn’t have to be cool, touristy or popular. My memories of Hualien will be of a long bumpy bus ride and the changing of buses, the final bus which cost us 89 NT Dollars (one pound seventy perhaps) was a 35 minute delve right into the heart of Tailuga. A place which is magical, mystical, mysterious and oozing in real life beauty. 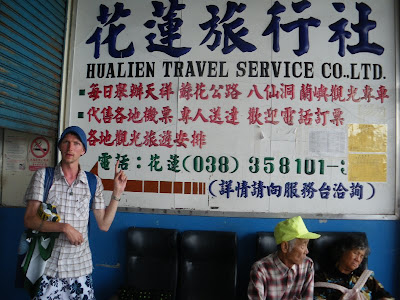 And you could sense that beauty on the way up. A river too wide to be a river was met by a village, clearly ruined or affected by abverse weather. Even our bus was ridiculously out of season. We were freezing! They had put the air conditioning on full blast, while outside I could dance naked and be warm. Despite the rain and thunder storm weather it is important to know that Taiwan is always warm! Except on our freezer bus, blue and grey which carried less than 10 of us that day into the realm of Tailuga. “Final Stop” said Eva. Out we got into the pouring pissing rain. And we had nowhere to stay, but were near a toilet, some mountains, the best scenery you could imagine (misty mountains, dreamy forest) and the tourist information was just opposite where the bus had pulled up. We were in Tailuga, finally after a 10 hour trip, featuring four entirely different buses, and the cities of Taidong, Hualien, Shihtiping and now…Tailuga.
The route – Kaohsiung to Tailuga via the east coast.
Cities we stopped at on the way – Taidong, Hualien (and for 5 minutes at Shihtiping).
Transport needed – FOUR different buses, maximum bus cost was £6.
Weather – Piping hot to begin with and then thunderstorm weather.
Journey time – 10 hours (we left at 5 am) but this did include 2 scenic stops at Hualien and Taidong. If you’re as quick and busy as me, you can see some sights in between the buses!
Nationalities Met – Taiwanese (is it any surprise?)
BUS ONE – KAOHSIUNG – TAIDONG (sleepy bus):
BUS TWO – TAIDONG – CHINPU (scenic bus):
BUS THREE – DAGANG KOU – HUALIEN (the rocky windy rainy bus):
BUS FOUR – HUALIEN – TAROKO/TAILUGA:
ELOQUENT CONVERSATION WITH 70 YEAR OLD TAIWANESE LADY ON BUS NEAR TAIDONG. GOD BLESS:
TAIDONG/TAITUNG STATION, by Tourist Information Office:
HUALIEN BUS STATION – CHANGING BUSES:
Join 15,017 Monthly Readers! If you enjoyed this article and LOVE travel and SAVING money, get e-mail updates from Don’t Stop Living – a lifestyle of travel! (It’s Free) 😉 Jonny

2 thoughts on “Backpacking in Taiwan: Taidong, Hualien and bus tripping up the East Coast”