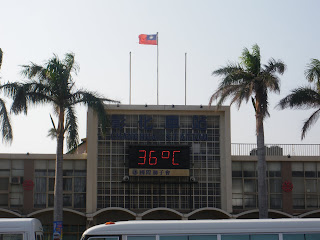 Changhua City. Its a big city in Taiwan. I had never heard of it before yet I found myself with some spare time towards the end of our time in Taiwan. We had bunged in a lot, having basically toured the entire island as much as we could in 2 weeks. On a free Friday I decided to make the day trip train journey and do a double venture into the cities of Changhua and Taichung. They are both on the west of the island, neither directly by the sea, and they are within 30 miles of each other. It was easily possible to get my fill of both cities in just one day, even if it meant an obvious neglect of some of the sights. Mind you…I saw all I needed to see. Especially in Changhua. 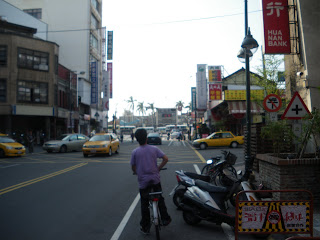 On exiting the station, Changhua looks clean, vibrant and busy. Hoardes of school kids are around on the main streets. The city was much less “pushy” than Tainan or Kaohsiung, shop vendors and jobless taxi drivers dont interrupt you as much in Changhua. I stood out a mile on my own on my trip there. I must admit I didn’t see any non-Taiwanese people at all. Even at the touristy spots I was going to visit. Natalja had gone to Taipei to stay with a mate that day and Neil had gone to work. I was the remaining foreigner in the pack. I planned an easy route to see all the sights I wanted. It was all withing walking distance along main streets. Very handy. Total textbook travelling and sight seeing to be honest. 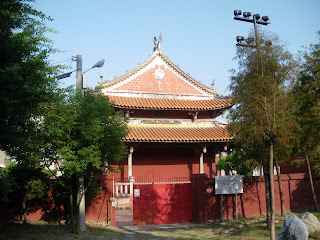 First port of call was the famous Confucius Temple. The route was straight along Gaungfu Street, turn right at Minsheng Road and right there was the temple, and entrance. A corrugated iron entrance door was painted red and at the end of a mini garden. This was the entrance. In the background, the temple. It was built in 1726, and although is not the oldest Confucius Temple in Taiwan, its one of them. A plaque on the entrance reveals how it is a “national trust” location. There were a few people in there praying, and 3 other tourists (no westerners) while I was there. 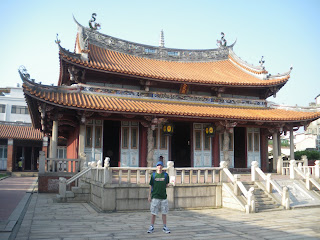 Round the corner from this temple lay on the floor a map of the stars, I picked out the Aries stars before continuing past more school kids (they were everywhere!) on Kongmen Road. A busy junction sees Kongmen Road meet Jhongshan Road and this crossroads is the scene for a few of the next sights to see. An unplanned photo opportunity of the city council building arose here, on the right hand side. Straight ahead lay an arch, which acted as the entrance to Gongyuan Road. This road is where the Giant Buddha Statue is, and also Nine Dragons Pond and the Scenic Area around it including statues and temples. To the left of the crossroads, a bank which made me think of my sister – the Cathay United Bank (OK so her name is Cathy, but in the middle of a random city in Taiwan it was pretty close…). Also opposite a school and a museum. It was an arts museum, and a library. But I headed through the arch and up towards the Giant Buddha, the city’s main attraction.

VIDEO ON WAY TO BUDDHA STATUE: 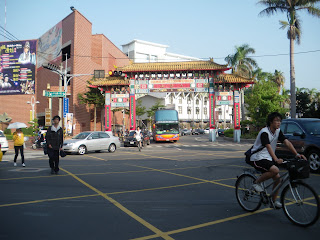 If you do feel the need to visit Changhua, its definitely worth it for a day trip (or for a few hours like I did), probably even just to see the Giant Buddha statue. A hill leads you up to yet another over elaborate archway. Beyond this a path full of statues of either humans or dragon turtles leads up to a central focus point. It is from here you get a fantastic view of the city. On one side the Buddha statue area and on the other side a walkway over a fountain which has an excellent view over the massive city of Changhua. I say massive because it looked bigger than Belfast to me. It is bizarre how cities in Taiwan that are unknown, and don’t even class themselves as being big, end up being larger than my own capital city. Still I admired the view, savoured the moment, drank some water in the heat and made this wee video:

VIDEO OF CHANGHUA CITY, from BAGUASHAN: 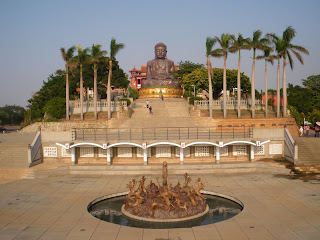 This area, is referred to as the “Giant Buddha Scenic Area” in English, or probably best to call it “Baguashan” The best thing it is all free. Though I did leave a donation inside the Giant Buddha. The park is quite big and behind where the great view is there is the massive gold “Giant Buddha” statue. I’m guessing that it is the biggest Buddha statue in Taiwan, but I can’t be sure. If anyone knows let me know. Its 22 metres high. 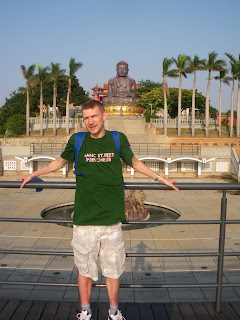 You enter through one door, walk up 3 floors to the peak (or the highest point you can walk to) and you leave via another door, where you make the donation. Inside are various smaller statues and lots of Chinese writing and colourful painted walls. You get a view over the gardens from a small window. After being “inside Buddha” I walked round the gardens where there is a massive four sided forecourt and more traditional style Taiwanese buildings. 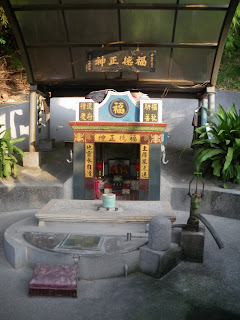 After this I walked straight back down the same hill and was this time going to visit a famous well – I couldn’t quite find it at first, and had to call into the museum to ask. The Changhua Arts Museum was in behind a school, library and what appeared to be a bookshop (though a strange one with big boxes of books – no shelves and a scanner was forced on my head upon entering!). All I wanted was to find the well and make a wish. The guy on reception was very helpful and he walked me right over to the well. Its called “HongMao Well” and is Dutch. Its a very small well with a shrine behind it. You cannot see down into the well as its been covered up. Several scary dogs which have no owner guard the entrance for some reason. I went in to make a wish. I used the old pump to drink a sip of the water from the well. There was a notice there in English which read something like “you can drink this water, but only when it is boiled”, I thought why not? and had a sip of the cold stuff. It couldn’t do me that much harm surely!
VIDEO FROM HONG MAO WELL: 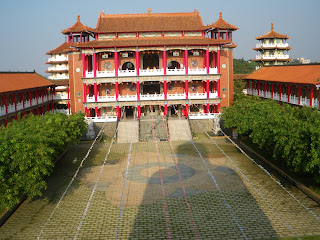 After seeing that and another quick dander through the main streets of Changhua, I was pretty much done with it. A big city yes, but very easy to navigate around and a few nice things to see. After Changhua I jumped onto a slow local train to Taichung, another city in the west of Taiwan, but a much bigger one and that will be my next adventure post on here, I’d imagine. If I ever get this blog up to date it will be a miracle. There are simply not enough days in the week at present.

THE TRAIN TO CHANGHUA, STOPPING AT CHIAYI:

THE TRAIN TO CHANGHUA:

1 thought on “Backpacking in Taiwan: Touring Changhua City and Baguashan”