It was the first time I would ever attempt to watch a Northern Ireland match on the internet, and the first time I would be in Asia when we have a match. I gave up travelling to Northern Ireland away matches back in February 2009, when life changed forever. It is a pleasing aspect in many ways as it was 5 fantastic years of away matches, where I’d missed only 2 competitive aways (Azerbaijan and Spain – I couldn’t afford either match). That first match, Azerbaijan in 2004, I watched with two other NI fans in Bournemouth – Aaron and Kylie, who I haven’t seen since sadly. The second match I missed, Spain in 2007, I watched in London in the F3K pub at West Kensington with quite a lot of NI fans. Now suddenly I found myself in Shinying, Taiwan. A city that would never have heard of Northern Ireland, or even football. 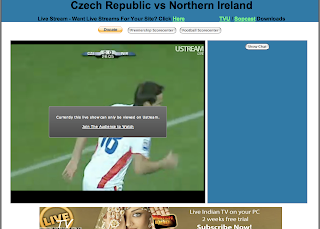 Things got kind of sublime when, a week before in the Hang Out bar in Tainan I met Ricky McClements, also from Bangor in NI. I told him about the Czech Republic match and my plans to watch it on my laptop somehow. Given that he wasn’t as such a big NI fan as myself, he was still up for watching the match with us. My mate Millwall Neil secured us his local pub, which he assured would have both matches available. That is to say he wanted to watch England v Belarus live on the TV Screen in there and I could watch the Czech Republic v Northern Ireland match live on my laptop using the bars wireless internet service and my Apple MacBook’s “Airport” wireless service. It was all set, I was very much looking forward to the Shinying Norn Iron match experience, guaranteed with one other NI fan and wireless streaming. After a fun day in Kuan Tzu Ling (see another post) we returned to Shinying, and we went to a posh Fish Restaurant in Shinying. 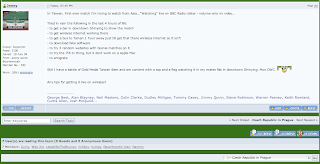 THis was by invite from Eva Jun, who wanted to say goodbye to Natalja after 2 weeks. Natalja was leaving for Taipei early the next day to visit friends, while I would stay in Shinying (and also visit Taichung and Changhua) for another 2 days. After an amazing dinner in the fish restaurant, we walked to the pub, the “Ocean Every Day” pub in Shinying, Neil’s local and the one where the bar manager “Jen” works. I had already posted on the website “our wee country” to say I would be watching it on internet in Shinying! There were a few potential issues, which were:
1. Would the wireless in there be fast enough?
2. Could I find a website which streamed the match live?
3. What time was the match on in Taiwan? (One website claimed 2 am, another claimed 3 am, another even claimed 4 am. I’d have to be ready from 1 am, I thought. 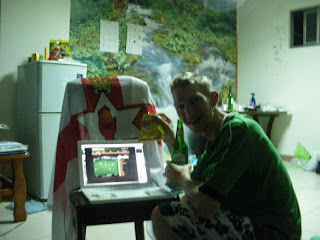 A few days before the match I had tried to register (and pay 6 pounds) for live streaming on the IFA Official Website, however it doesn’t work on Macs and we didn’t have access to another public computer, so that option was out. The chance was then to watch it on a random illegal streaming website, of which I was given a few:
“Footy sites, well firstly u need www.sopcast.com download there software, then go to www.myp2p.eu and go to football heading at top of page find ur match and obama is bin ladens brother:-) alternativley go to www.atdhe.fr and press live sports, then pick the match u want.” – Chris Bilsland’s idea
Or Legally:
1. BBC Radio Ulster (sound only)
2. Bet 365 (But you have to pay 10 pounds) 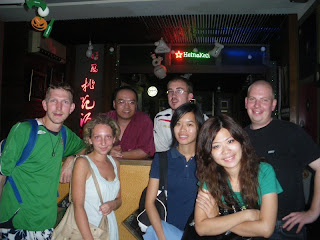 We arrived in the pub in plenty of time for the football, and there was Ricky from Bangor to watch the match with us. Then we encountered our first problem…em Neil was wrong for once and the pub DIDN’T have live wireless internet unfortunately, so it meant there was no way I could watch the Norn Iron match in there. It was now less than an hour to kick off (I’d thought) and Ricky suggested the Hang Out bar in Tainan, where we had been a week before. They definitely would have wireless internet but it would mean a 1 hour bus ride, and before that a 30 minute walk to the bus stop. Weighing up the options and with kick off looming – we went for the traditional carryout option! Go back to Neil’s flat with a few Taiwan beers and watch it there – Neil had wireless internet! Why didn’t we think of that in the first place??!! (Actually I think it was because more people would be in the pub and it was more sociable). 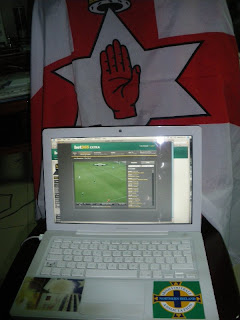 IN the end we left the pub, said goodbye to Ricky and Eva (who both headed back to Tainan around 2 am), and Neil and I just got a carryout from the local pub and went back to his. Northern Ireland were practically out, we would have needed to win 5-0 and for Slovenia to lose to San Marino by a few goals too I think, so it wasn’t going to be a fairytale ending. But we still went into our last match with a mathematical chance of qualifying, which was great. We got back to Neil’s just before kick off, the laptop went on, the packet of crushed Tayto Cheese and Onion was brought out (it had been in 5 countries), my NI fleg was put up on the seat and I was attempting to find the match. At first I could only listen to it on Radio Ulster. But then as time went on, and I posted on Our Wee Country and even used Facebook.com (which I used to use loads, but not much these days) to chat with mates to see if they could help. And after to ing and fro ing and trying countless web streaming sites, I eventually paid 10 pounds to Bet 365.net to watch the match on a slow streaming option. But at least I had it!! It was fun. As Neil watched England beat Belarus 3-0 on his TV behind, I was sat cheering on Norn Iron, dominating play in the Czech Republic and doing me proud. BUT we couldn’t get that all important goal to win, get the 3 points and claim third place. We had to settle for fourth place in a group we should have won, but I was glad that finally I had watched part of the match live from Taiwan. Thanks to Jono, Richboy, Chris Bilsland, Sammy G and Neil Macey for making it all possible…

Who knows you may see me at a Northern Ireland away match again some time. Stranger things have happened…