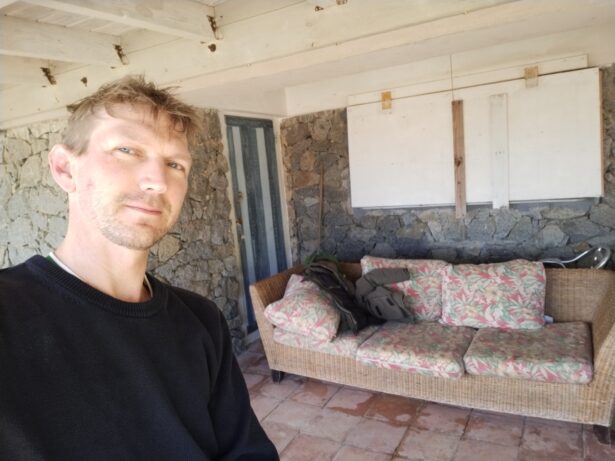 Backpacking in The British Virgin Islands: Sleeping On A Settee On Beef Island

A 30 year old Elton John song pumped out of a stereo on wacaday Beef Island as I arrived, soul searching, lost, nomadic and out of sorts…I was on Beef Island. Where? Where is it? 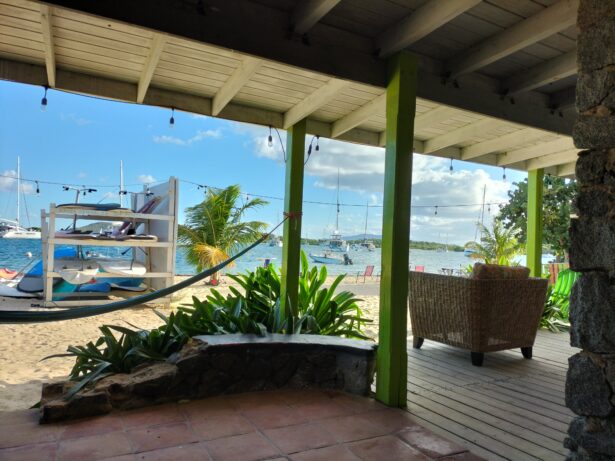 This is Beef Island…

The day before I landed at Beef Island in the British Virgin Islands??, I didn’t even know that I was going there! I had no plans except to end the worst year of my life in a remote island far away. In books and blogs to come I might live to tell the horror tales of my 2021. What happened in 2021 I simply cannot fathom any more and am in total shock daily by the horrific events of September 30th 2021. However, I somehow survived. I was glad to be alive and I was far away. In fact, as the moon sank on Friday 31st December 2021, I had just landed in country 199 on my journey. It was to be…Beef Island… 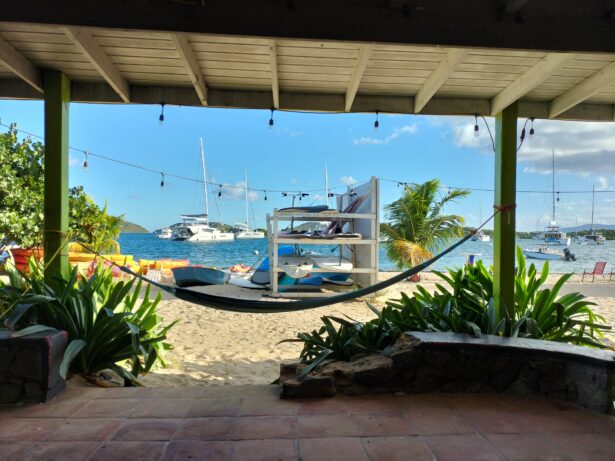 It was a last minute flight that I booked from a WiFi bar by the famous Aeroplane Runway Beach at Maho Bay on Sint Maarten. I found a flight into Beef Island from St. John’s (Antigua and Barbuda). So I had booked my flight in but had no flight out, no accommodation booked, no online visa document, no travel insurance…I had NOTHING planned. Beef Island is a small island and thanks to InterCaribbean, it served as my entry point into the British Virgin Islands. 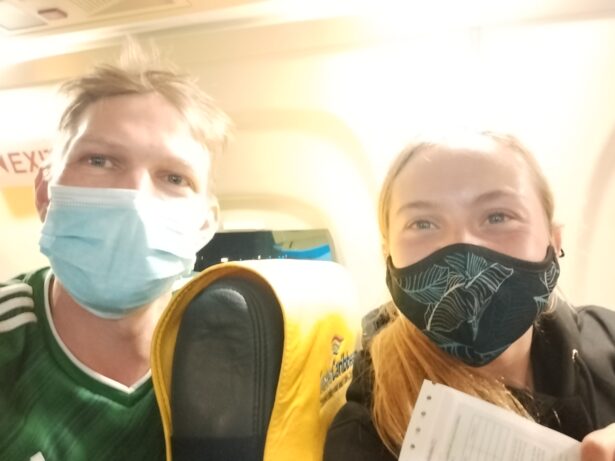 I read a little bit about the British Virgin Islands on the UK government website and therefore I decided to use my British passport to wing this one, knowing they were unlikely to turn down entry to one of their “own” citizens. Especially when I noticed that this was to be my 199th country!!

What could go wrong? No accommodation booked, no flight out booked, no online visa form…

However it was New Year’s Eve and I was landing on the last flight in of 2021. Airport staff should be kind eh? Plus I had money, a travel blog, a UK passport and 13 Negative COVID tests, one of which was from the day before…

I met a lovely lady called Olivia at Antigua international airport and she joined me for a drink and sat in the seat in front on the flight from Saint John’s to Beef Island. I think she was a bit surprised that such an experienced traveller like me was arriving in such a beautiful place with no forward plans… 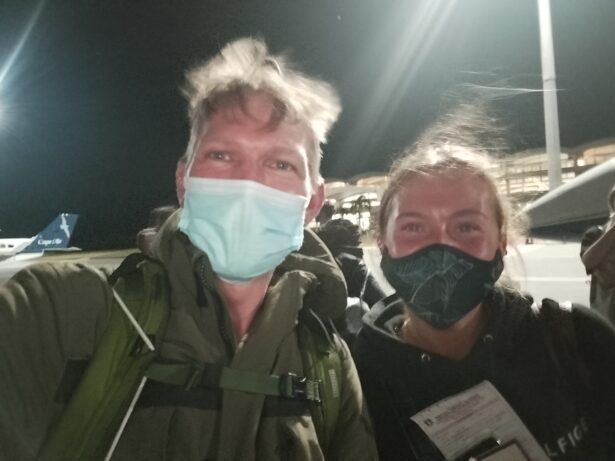 The quite wonderful Olivia and I land on Beef Island

We landed on Beef Island on New Year’s Eve 2021. Olivia had arranged to do her PCR test on arrival and was Negative too. I headed to the immigration counter with my passport ready to celebrate New Year’s Eve here. I was told, “Mister Blair you need to book a flight out and a hotel during your stay”! Oops! I hadn’t considered that, I was going island to island and booking everything as it happened. I was freewheeling it and had no idea or plans as to where I would be next… 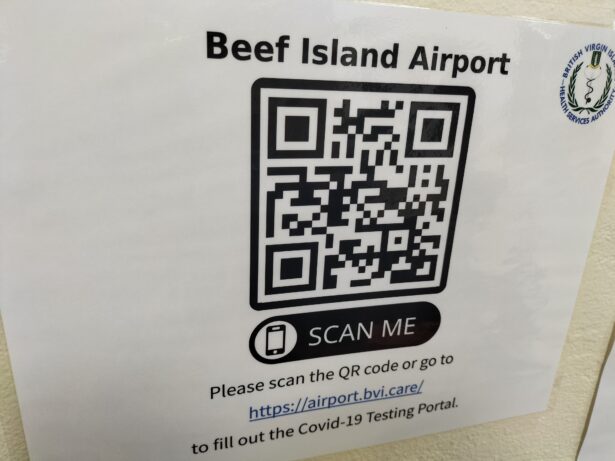 Now as a travel blogger and writer I usually get sponsored or free hotels. This time, I simply hadn’t found time to email hotels in the British Virgin Islands to request this. I booked my flight into Beef Island a day before. ?

I explained to immigration that I’m a travel blogger and usually have a hotel sorted. They said they didn’t know what to do but I should book a hotel and a flight out immediately and if I do that, they will let me pass through immigration. I asked if they have WiFi…

Yes they had. Luckily I had my Clever phone charged over 60% so I turned on the WiFi and it worked.

The only problem now was that I had to do a few things I’d never done before:

I worked fast. I had no time to email hotels and all the ones that came up were over $200 US a night, so I wouldn’t be paying that. I’d be blagging it.

I found about four flights out the next day, mostly on Expedia who had featured me down the years and paid me to write for them. I felt that I had to use Expedia here.

I also felt I had to leave the next day. In other words spend tonight (New Years Eve, 31st December 2021) Just get out while I was PCR COVID test negative, I was legally allowed in EU and UK. I spontaneously made the decision to head back to the UK and onward to Poland. This was a contrast and contradiction to me. I hadn’t been in Great Britain for 2 days short of 24 months (January 2nd 2020) and I had decided never to go back to Poland. That was me on a bad day, thinking too extreme, fearing the worst in life. Now, my mind had been made up.

I quickly found three flights. One was for Frankfurt, one for Paris via Miami and one straight to Heathrow from Saint John’s. I booked Heathrow quickly then an Intercaribbean Airlines flight from Beef Island to St Johns. Like a few other countries on this trip, I’d double up on Antigua (but not Barbuda). It was a no brainer. I booked a flight back to Heathrow, which would leave the following evening. I’d then spend a day in London before flying to Gdansk in Poland.

So I showed the flight booking to immigration and they agreed to stamp my passport and let me in, however they told me they would help me find a hotel and a taxi driver to take me there. The only hotel they had came in at $400 US Dollars for ONE night, yes – $400 US! I’d also have to pay at least $50 US for the taxi there, as it was New Year’s Eve. This was to be an expensive night, or was it. I told them, I’ll take the taxi and stay there, though I had no intention of whackpacking either.

The immigration officer stamped me in, to the BVI, the British Virgin Islands…and I paid my “nature tax” – environmental and tourism levy. 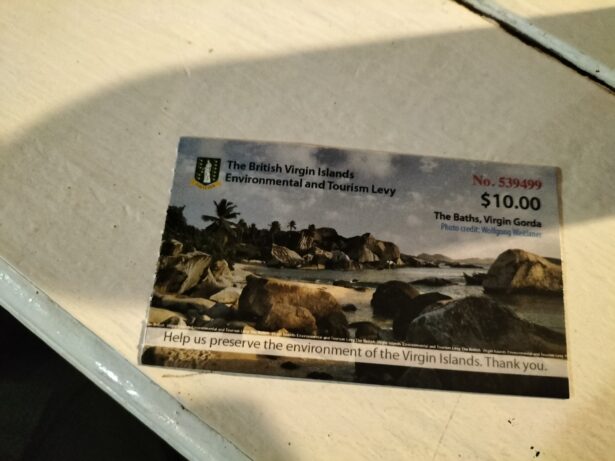 Nature Tax in the BVI 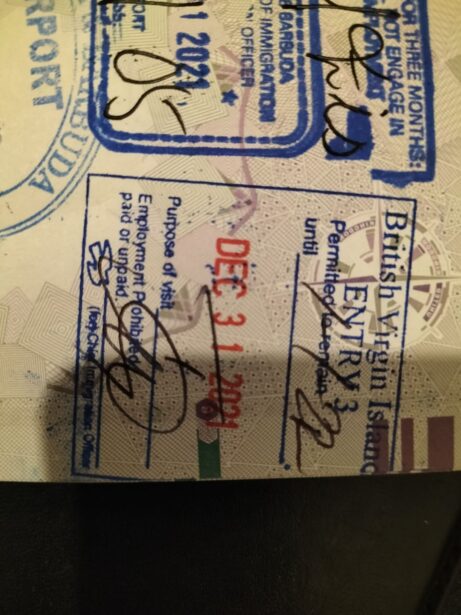 I then left the airport, walked to the nearest bar and ordered up a drink. I didn’t go for a beer, instead it was a Rude Boy! I ordered it in a bar called Trellis Bay Market. A party was going down, and it was less than 5 minutes walk from the airport! Welcome to Beef Island, welcome to the BVI! 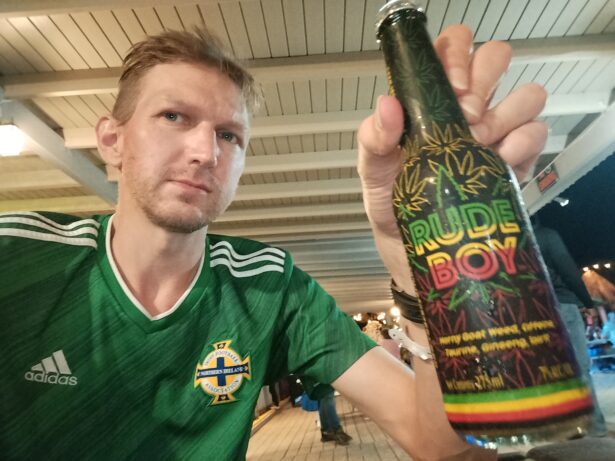 I was alone but I was content. I now had a flight out for the following night and a whole night and day here. I had no bed though and then I thought – well I don’t need one. I’ll stay up all night, have a sleep on the beach tomorrow, maybe tour the adjacent island, Tortula too and then back to the airport. After that Rude Boy drink, I headed for a walk along the beach and I was pleasantly surprised to find about 3 or 4 bars here. As I got to one, a lady was sitting down eating and she looked like an interesting character who could tell a story or two. So I asked if I could join her and I did. It was Emma from Southampton. Coincidence that I support that city’s rival football club, AFC Bournemouth. Emma was the boss at the famous Jeremies Kitchen Bar on Beef Island and so I ordered up a Red Stripe beer and we chatted away. 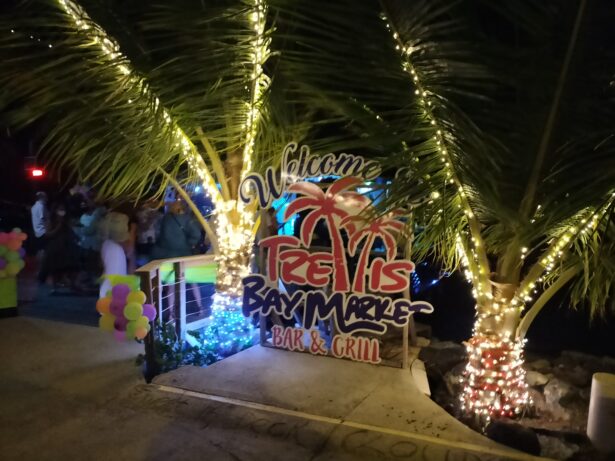 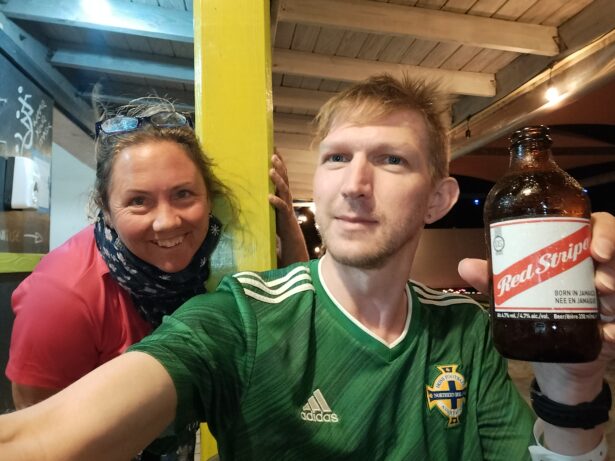 Red Stripe Loyal for NYE – Emma and I at Jeremies Kitchen

About an hour later, a brace of hot young Russian ladies dropped by and they started bouncing sexily on the trampoline in front of me. I admit, they were very attractive and so I joined them to do the bouncy. It was quite therapeutic and good for the hormones but I think I was getting too old to bounce around with them. Those ladies were a little crazy, and quite cool. I retired back to my beer and in the bar we did our own countdown to midnight on Beef Island. It was quite surreal! I was buying beers and certainly wasn’t going to waste $50 US on a taxi to a hotel that would be $400 US. The beers were $4 US and then I moved onto Rum Punch. Rum Punches became a top daily tipple for me while whackpacking the Caribbean. 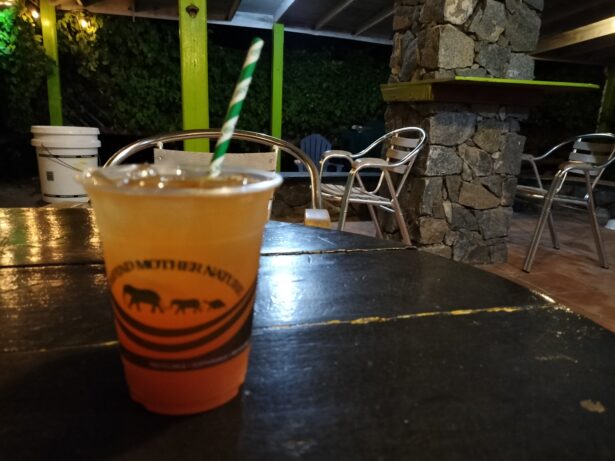 Finally around 3 / 4 a.m. I spotted a settee / sofa opposite the beach and slept here! I used my coat as a duvet and a cushion as my pillow. That’s budget backpacking. 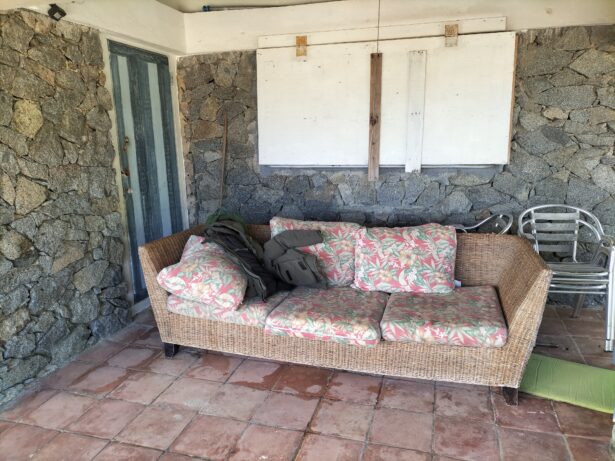 Backpacking in The British Virgin Islands: Sleeping On A Settee On Beef Island

But this was only the start of the madness. I ordered up a coffee, then a Rum Punch for breakfast and as I did that, I checked my Facebook messages…and by a huge ridiculous surprise, a friend of mine, Diane who I met in Iran, but who hails from Northern Ireland…she was here that time and so she came to pick me up and show me Beef Island and Tortola for New Year’s Day 2022. What a crazy time…