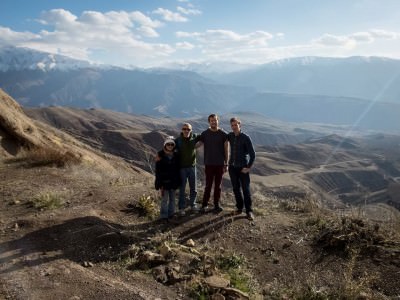 Heading out into the Alamut Valley is something you should aim to do when you’re backpacking in Iran. Away from the big city appeal of Tehran, Isfahan, Shiraz and Tabriz, here you find solace in a tranquil mountain village in the gorgeous valleys. You might even forget you’re in Iran for a second!  We found visiting Alamut Castle to be yet another off the wall travel gem, and loved the name of the village next to the Castle – Gazor Khan! 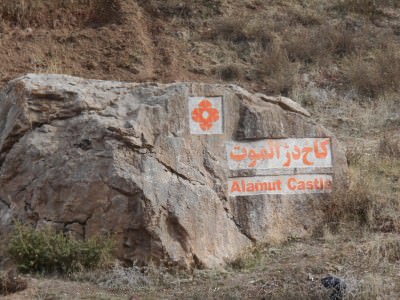 The sign at the start of the hike to Alamut Castle in Gazor Khan, Iran.

I mis-spelt it and mis-called it many times – Ganzo Khan, Gander Khan, Gandor Khan, but this place is Gazor Khan!! 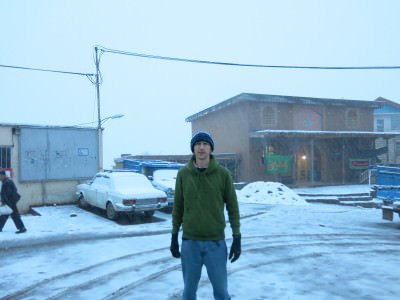 Central Gazor Khan, on a snowy and cold day!

There is no obvious public transport heading to Gazor Khan. While the locals may know the exact bus routes, they will be a bit trickier for foreigners to find. Especially in Autumn and Winter months. We were there in early December and it was off-season. There were no obvious or regular buses heading out to Gazor Khan after September time, so we had to look at the hiring a driver/taxi option. You’ll more than likely start off in Qazvin, which is a big city and the nearest large city to the Alamut Valley. 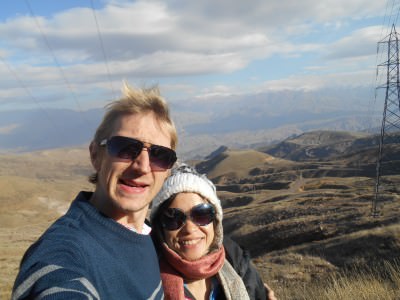 A stop over on the drive through the Alamut Valley to Gazor Khan, Iran.

At Qazvin head to the Qarib Kosh roundabout, which is on the left past a hospital as you head out of the city on Ayatollah Khamene ee Boulevard. From Qarib Kosh you can get a driver to take you all the way to Gazor Khan. Have the information ready to give him – they don’t speak English. 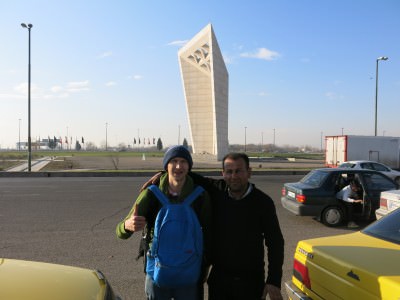 At the roundabout in Qazvin heading out to Gazor Khan. 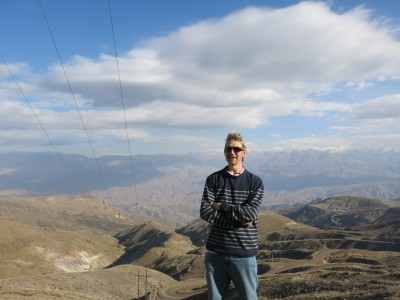 Loving the views on route to Gazor Khan.

Hitching a ride is an option as well of course, but I don’t recommend it on this route because it’s hard enough to explain to a taxi driver where you want to go, never mind a driver who voluntarily picks you up by the side of the road in the middle of these valleys.

Gazor Khan has approximately three hotels, they are really just houses where you can stay, these three are: 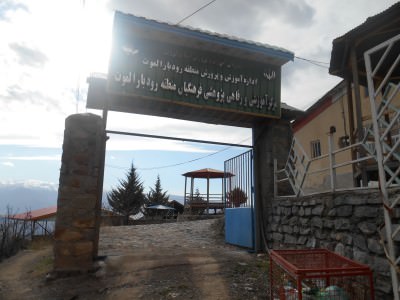 The entrance to the Hotel Farhangian in Gazor Khan, Iran.

In peak season, book ahead – check with the tourist information offices in Qazvin and ask them to call the hotel and book for you. We were the only ones staying in Hotel Farhangian and knew it wasn’t busy, but still got it booked anyway (well – we booked it from the tourist information centre in Qazvin the day we were heading). Hotel Farhangian has an ensuite and kitchen in the dorm rooms, with hot water and gas. They don’t offer any food. We cooked our own food – cheap noodles. 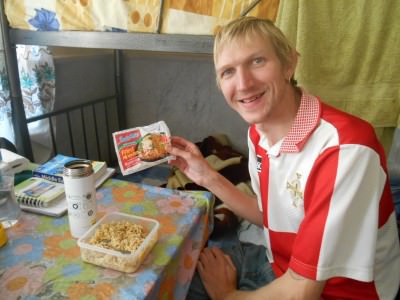 Eating cheap noodles in our hotel room in Gazor Khan.

It’s an Iranian mountain village in the valleys. It’s not set at a high altitude but it does get its fair share of snow in the winter. Apart from admiring the tranquility of the village and the daily life of the locals, there isn’t a great deal to do here. The highlight is your trip to Alamut Castle, which is a must visit when staying in Gazor Khan. 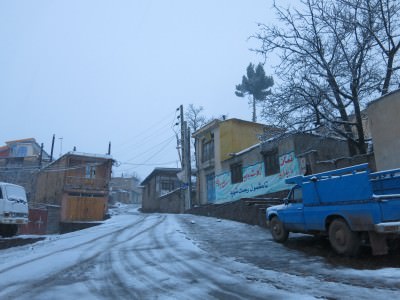 This is central Gazor Khan, a dreamy valley village in Iran. 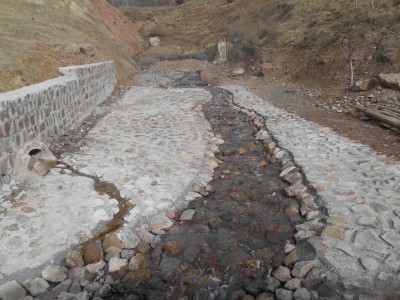 The path up to Alamut Castle. 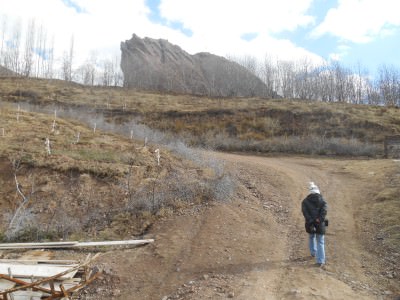 My girlfriend Panny walking up to Alamut Castle.

On the way up, there are views of the hills and valleys behind Alamut Castle. 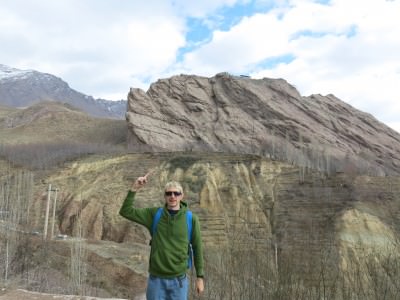 On the way up to Alamut Castle, Gazor Khan, Iran.

Half way up there is an arch like entrance to the castle walls. When we visited there was reconstruction works on and entry was free. 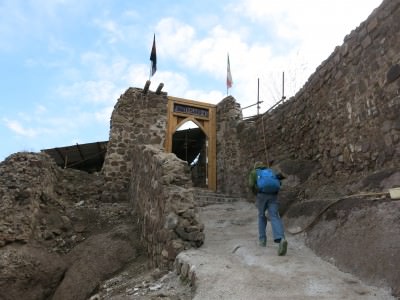 Walking up to the entrance to Alamut Castle.

Normally there is an entry fee. When we reached the top, one of the guys working there tried to get us to be but we didn’t bother. It didn’t seem right to pay when there was scaffolding everywhere and they were working around us. 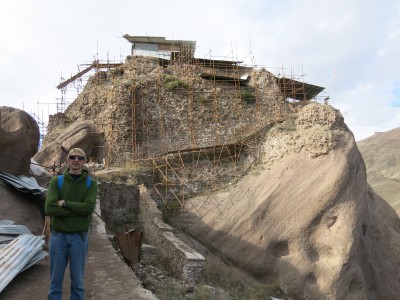 Inside Alamut Castle which was being renovated when we visited.

At the top there is a mosque inside the complex and a lot of cool viewing points. It’s worth spending time to relax at the top and admire the views. 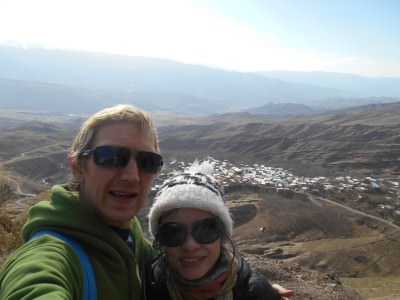 Panny and I at the top of Alamut Castle loving the views into Alamut Valley.

We headed down through a cave in the castle to the other side for a viewpoint. 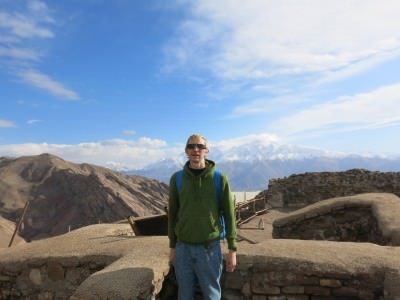 Got no reason to be king of this castle.

It was then we saw TWO other backpackers. It was the first time in three days we had met other travellers in Iran. Not only that, but it was Patrick Burke and his Dutch friend!! Patrick is the guy from Belfast that I met in Trabzon and later in Dogubayazit! Patrick runs the website findingpatrickburke.com , a fellow Northern Irishman, blogger, backpacker, traveller and explorer on a journey. Patricks’s journey is even cheaper than mine – he’s hitch hiking from Belfast to Beijing! 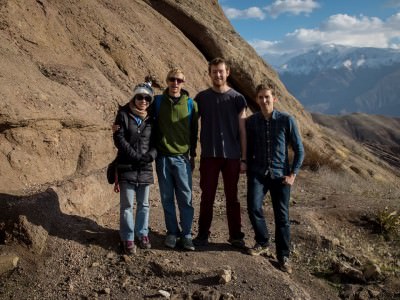 With my girlfriend Panny and the Belfast backpacker and hitchhiker Patrick Burke who we met there by chance!!

After meeting with Patrick and posing for photos with him, we headed back down. 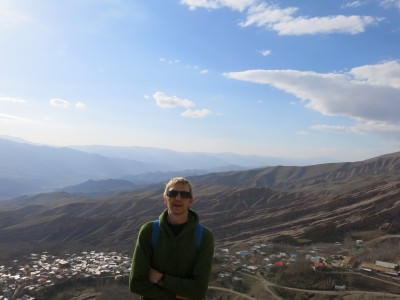 The views over the valleys are epic from Alamut Castle.

We took an early night in Gazor Khan after cooking in our hostel room. It snowed heavily overnight and our eyes feasted on a pretty winter wonderland the next morning before we headed back to Qazvin. The snowfall in the Alamut Valley region is fantastic – the Iran I never thought about until I went there. 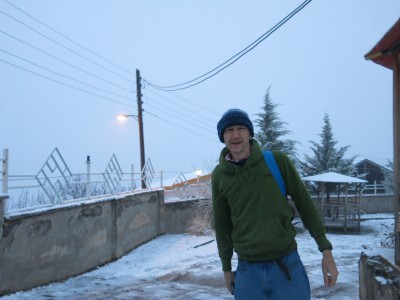 The second day in Gazor Khan the snow fell down…

There’s more to come on my adventures backpacking in Iran. Here are my videos from Gazor Khan and Alamut Castle: