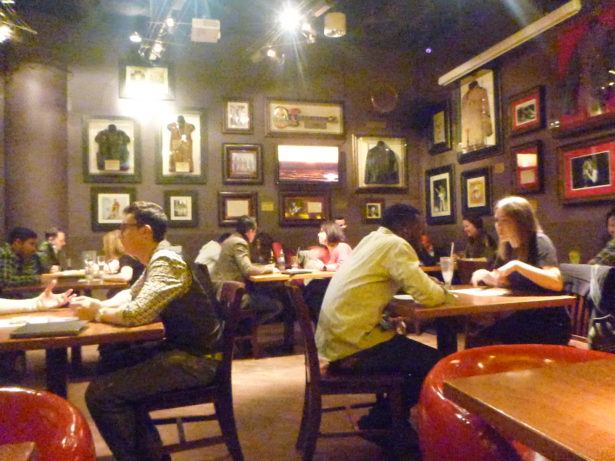 Long before I had this blog, and when I was also single, back in 2004 as a student at Bournemouth University, in England, I went to a “Speed Dating night” with my friends Lock in Lee, Mad Mike and Jody. At the time, reality events and TV shows were all the rage, I appeared in two mini versions of “Big Brother” around that era, this was something new. I never wrote about that Speed Dating adventure on this platform before but I did cover the Lock In (fake Big Brother). Speed dating was new at the time, a load of these Woking dating sites were also appearing (pre- Facebook days too). It was a fad, a craze at the time and so as four single guys at the time, we jumped on board. The biggest shock for me, was when I turned up to that event (in March 2004), my ex girlfriend was one of the girls!! Mad Mike got a date out of it and well, it was just another night on the journey. A dot on my globe and part of my wacaday 151 country journey on planet earth. 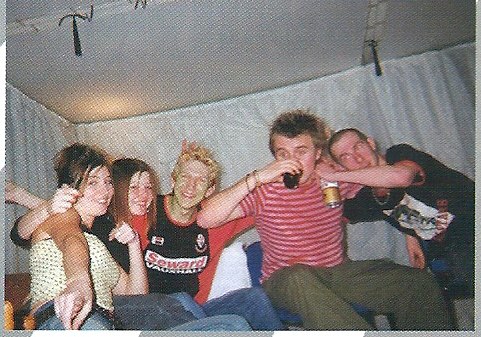 Fast forward 13 years, it was now February 2017 and I found myself back in the Polish capital city of Warsaw, with depression, severe problems with trusting others and just destroyed by my own travels and what they didn’t bring me. Then I decided to launch a new project, Northern Irishman in Poland. it was just something new I felt I needed. And so, after a 13 year absence, I heard about a Speed Dating night in Warsaw, in English not Polish, so I put myself down for it, it was seen on Facebook on Warsaw Social, Professionals in Warsaw and Warsaw Social Website. I put my name on the list and thought “why not?” 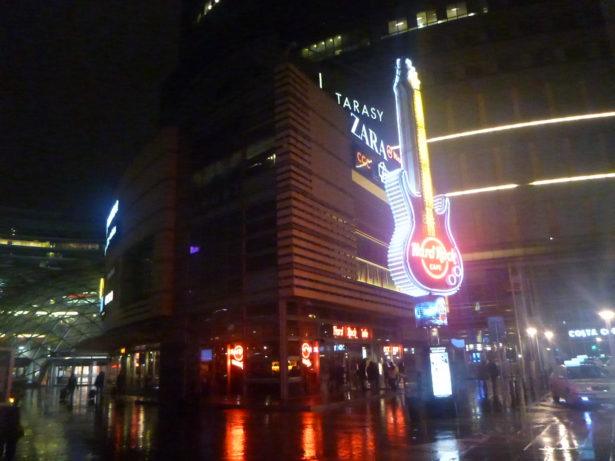 What is “speed dating”?
It’s not a quick kiss, a quick date or a fling. It’s much more intelligent and co-ordinated than that. I was single again, something I really don’t cope well with anymore. I hate it, so this was another chance of ensuring dates for a night. If only for one night, but there is so much uncertainty around it. Who will the girls be? Where are they from? Will they be young enough for me, or will I find myself ridiculously at an over 50s dating night? Speed Dating is not a new phenomenom of course as you know I went to one in 2004. You get a group of girls and a group of guys together. Somebody or some company organises it, normally in a city. The UK has many such events and of course there is also the online dating option, with websites now, such as County Durham dating, London dating and from gorgeous Devon, you have the chance of finding a lovely Devon girl (or guy) via Torquay dating.

They usually all work the same way. Single people pay a fixed fee (for the online dating or the event). Normally they are all single, but you cannot be sure. Normally the girls are seated at tables with a spare seat, ready for the gentleman. Say for example 15 girls at 15 tables with 15 spare seats. 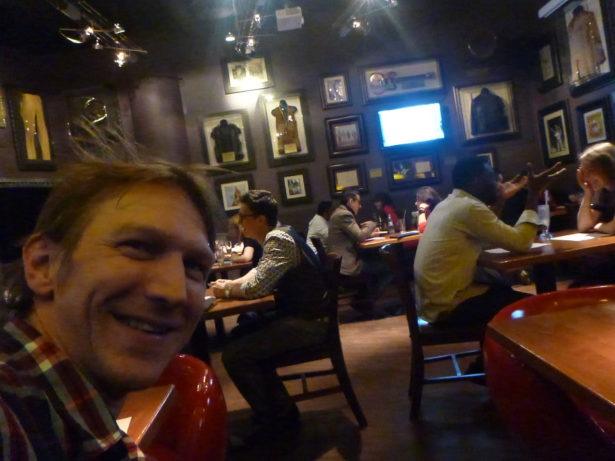 Separately, guys wait in another room (in this case, guys arrive at the venue 10 minutes later than the girls – so the girls are all already seated when we get there and we don’t see them coming in). The guys are each given a number, and so are the girls. The 15 guys are then assigned the seat of their first “date”. You walk into the room and sit in that seat opposite your first “date”. The “speed date” lasts 4 minutes with each person. You get 4 minutes to chat about anything you want, then the organiser blows a whistle or announces, it’s time for the next “date”. You move to the next girl and keep going until you have had a 4 minute date with all of these girls. Tonight’s event is held centrally in Warsaw, I remembered the 2004 one was in Bournemouth’s “Klute” Bar. Tonight I alight at Metro Centrum and bang opposite that famous building, the one that inspired my personal tune on “Stalin’s reign“. 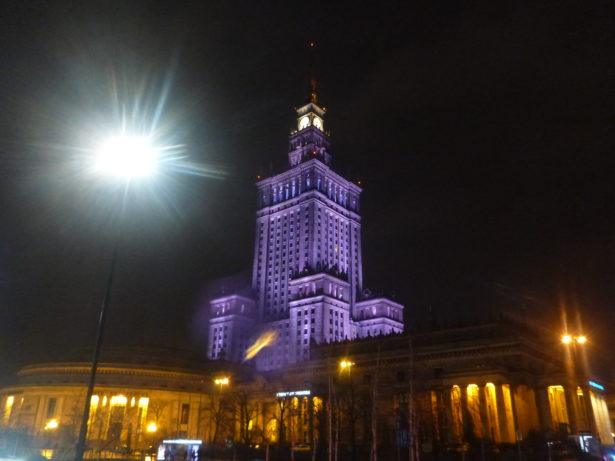 Hard Rock Cafe, Warsaw
So I arrived at 8.40 pm at the swanky Hard Rock Cafe in Warsaw. I sign in to register with Robert, the organiser, who is from England, we are given our numbers, pens and pieces of paper, and the dates began. 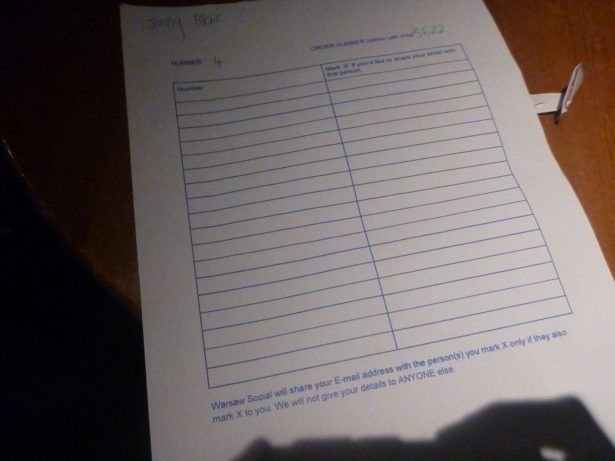 I marked quite a few “x”s on this occasion but to protect the identity of the girls, I won’t say which ones I ticked and which I didn’t. Here is my “blue box of mystery” 😉 Some of the girls admitted to me that they had been on several dates, loved a bit of sex with no extra commitments and two of them had even met guys online via Somerset dating and Humberside dating agencies. I did tell them a bit about my love affairs on the road, like the seductress in Taiwan, the lovely Noemi Linzenbold who backpacked Venice and Hungary with me and of course Panny Yu, jewel of Hong Kong. 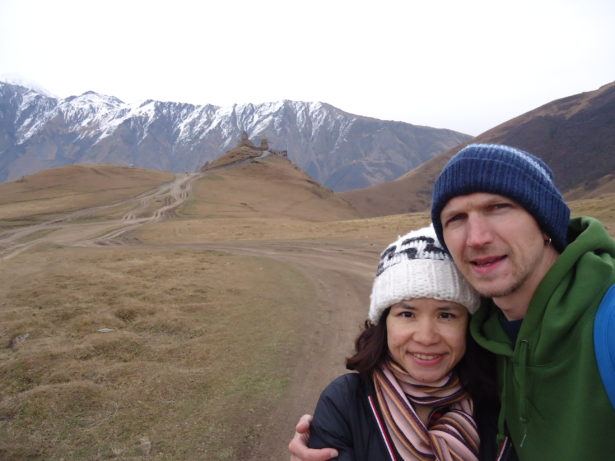 Panny and I hiking in Georgia

After that, the evening ends and we are back out into the open air of a Warsaw evening. Then you simply wait a few days to see if any of the girls you “ticked” also ticked you. If they did, both parties are given each other’s email addresses and it is up to you if you want to contact them. I did get some matches on that evening, but as yet none of us have been in touch. I think I will get in touch with these girls when I have more time, next week perhaps after my tour to Łódź.

It was a great evening and a cool experience. I recommend it to any single people in Warsaw. This type of dating can be fun! Thanks to Warsaw Social for organising! Here is a video I made on route to the event:

4 thoughts on “Backpacking in Poland: The Time I Went Speed Dating in Warszawa”