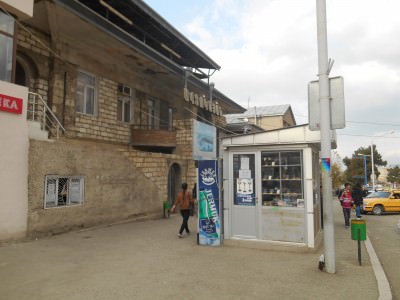 OK so down the years, I’ve been on some crazy types of transport on my travels and some absolutely manic journeys:

But this recent adventure kicked them all into touch, by a long shot. My girlfriend Panny Yu and I planned to head from Stepanakert to Vank in Nagorno Karabakh. The idea was to head on the 4pm mini-bus, (also called Marshrutkys in this part of the world) from the main bus station in Stepanakert…easy! 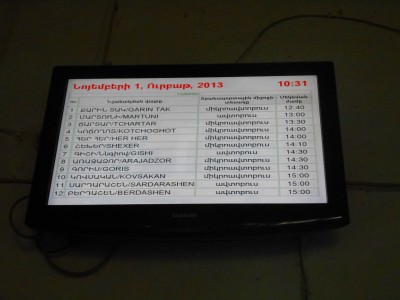 Timetable in the bus station in Stepanakert, Nagorno Karabakh. 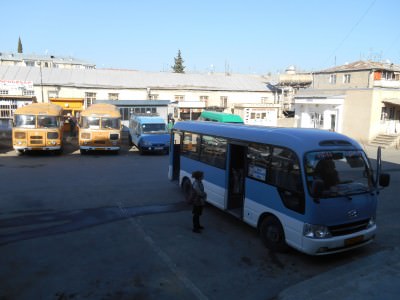 We asked at the counter in the central bus station at 9.30 am about the 4pm bus to Vank and were told it would be fine. We wouldn’t need a ticket, it wouldn’t be busy – just turn up and we were on route to lonely Vank. Oops…One thing to note is that people in Nagorno Karabakh don’t really speak English. Something was lost in translation and after touring the city and heading to Agdam and Askeran Fortress, suddenly we were told (at 3.35 pm) that the bus to Vank was full and we couldn’t buy a ticket. Plan B was the same as Plan A – get on the bus from Stepanakert to Vank at 4pm. 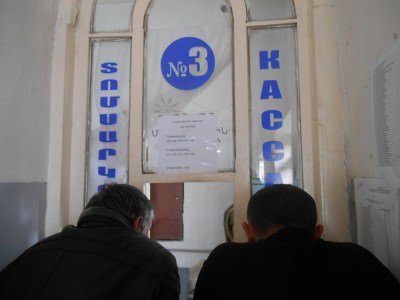 The ticket booth in Stepanakert.

This mini-bus was our last and only budget option to get to Vank that night – hitch-hiking would have been possible but we didn’t want to (I’d already hitch hiked that day back from Agdam) and so we decided well we will just get onto the bus to Vank anyway without a ticket and stay on it until we get to Vank. Even though it was full and even though we didn’t have a ticket. Who would stop two backpackers in a city which doesn’t have backpackers? 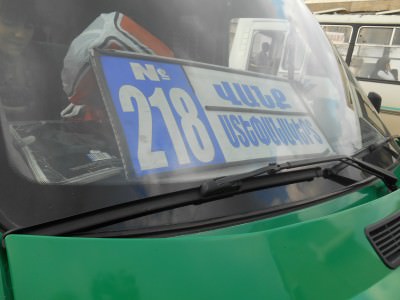 The crazy 218 mini bus from Stepanakert to Vank!

I knew we’d be fine. Not sure Panny Yu trusted me quite so much but on we got – it was a 17 seater mini bus. It had a strong green colour and all 17 seats were taken. I headed to the back while Panny asked a local girl to move over so that 2 seats could fit 3 people. Soon more got in and it was a crush. The door could barely close. But it closed. We were in and off we went. 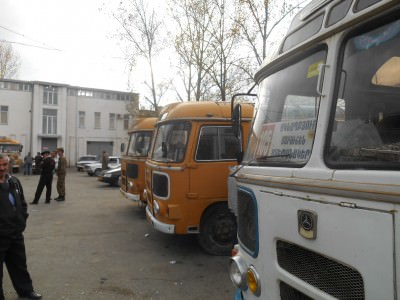 Before we had left though, a few of the locals got on the mini-bus saw these two backpackers and thought “who on earth are these aliens?” – a few of them asked if we had tickets. We didn’t respond/pretended not to know what they meant etc. A lot of the locals just laughed at the thought of us two there and let us away with it. Even the driver chuckled. 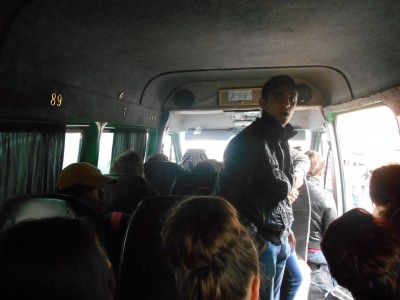 On board the crazy bus before it got full.

Backpacking in Nagorno Karabakh is not that normal by the way – there are no hostels in Stepanakert and no backpacking route. Even my visit to Agdam (report to come) was flawed as the army wouldn’t let me access the city by walking (apparently taxi is the way to go). Plus most backpackers here, don’t dare get on these local buses and head out into no mans land. Essentially that’s where Vank is. Yes – it’s a nice town with an elaborate hotel in the shape of a boat and a crazy designed village and yes it has an awesome Monastery in Gandzasar, but realistically it’s not on the traveller’s trail. 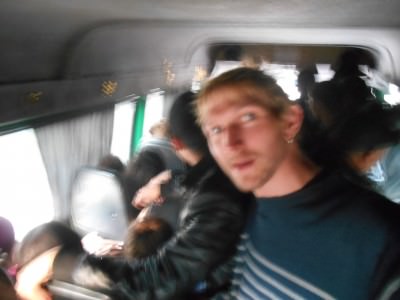 Trying to take a photo amongst the crazyness of it all.

I’m shoved into a space at the back of the bus. It’s bumpy, it’s tight and the locals are just laughing their heads off at us. Talking all the time to me in Armenian, I try to speak back in English. 5 teenage girls chuckle endlessly and they take over 3 seats between them. It’s all a big crush. I’ve got a full free bottle of pickled vodka in my bag at my feet, my laptop is in the same bag so I’m praying it doesn’t crack open! 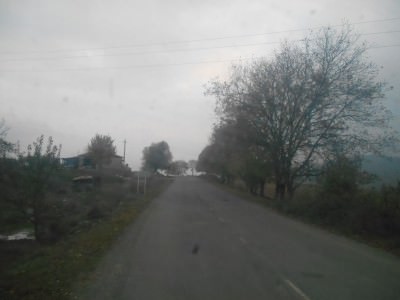 The road to Vank from the bus.

The road is rickety and bumpy but actually not that bad compared with China, Bolivia and Ethiopia. It’s more the fact there are almost 40 people in a 17 seater minibus!! One guy seems to be the “Fawnesy” of the gang – with a leather jacket on, and in his late teens this is the gossip guy. The hard lad of the bus. The cool dude. And he’s a top bloke. He chats away to me. He’s a hit with the girls when he asks me in English “what is your name?” “Jonny” I reply. “Nice to meet you. My name is David.” The entire bus is in stitches. Nobody else can speak English. 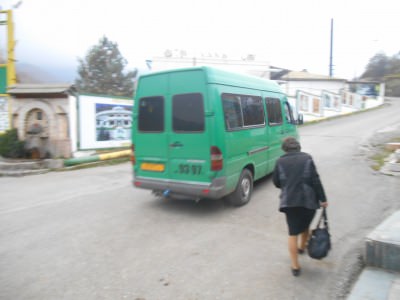 The minibus just after we arrived in Vank.

The journey lasts an hour and 10 minutes. It’s only just after the hour that we make our first stop to let a few people off and everyone can relax and the crush is over. We wave goodbye to every single person as they alight. Everyone is still laughing their heads off. It was almost like the whole green mini bus was on happy pills. While it was going on, I grabbed two quick videos the best I could from the bus but nothing can replace the pure memory of how hilarious the entire ride was. In fact the whole experience in Nagorno Karabakh had been crazy, from crossing the border from Armenia, to getting our Nagorno Karabakh visas, to hitch hiking back from Agdam to my crazy exit from the country. For the meantime though, we had made it to Vank, and headed to the Eclectic Hotel…

All you Need to Know about getting from Stepanakert to Vank:

– There is no space for your backpack

– They leave when they are full

– The journey takes just over one hour

– The number 218 bus serves this route

Some videos, but the madness of it all just cannot be seen here, Nagorno Karabakh is NUTS: