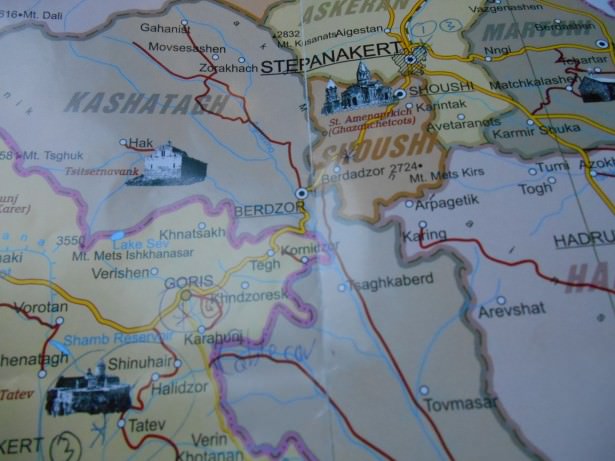 Without doubt this is one of my favourite border crossings of all time and I’m delighted to be writing about it here as it hasn’t been covered much on travel blogs. I aim to be the first backpacking travel blogger to write more than 10 posts on backpacking in Nagorno Karabakh. So without further ado, here is a full expert guide on how to get from Armenia to Nagorno Karabakh, by road at the Tegh to Berdadzor border crossing. 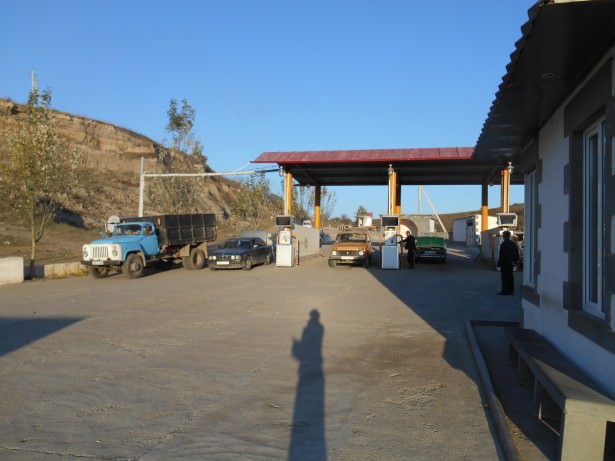 Where is Nagorno Karabakh?

Nagorno Karabakh sits like a blob inside the borders of Azerbaijan land (not in the middle exactly, to the west and near the Armenia border). It’s a country within a country, in a similar way to how landlocked Lesotho and San Marino sit within South Africa and Italy respectively. It’s a self governed and self recognised separate republic with its own parliament, flag, symbols and ways of life. It’s a country full of Armenian people. But ultimately it’s on Azerbaijan land so it’s a touchy subject between the two countries. Most other countries don’t recognise Nagorno Karabakh as a country. 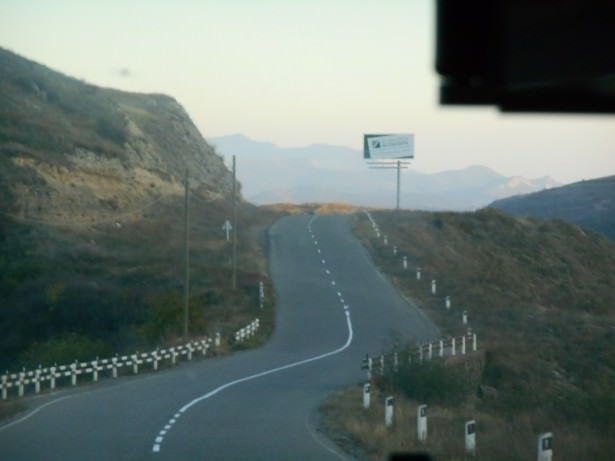 The long road from Armenia into Nagorno Karabakh

What is Nagorno Karabakh?

It’s a self governed republic. The people that live there are Armenian, but it’s argued they occupy land owned by Azerbaijan. It’s somewhat of an enigma, and a travel gem if truth be told. This is what the term “off the beaten track” was invented for. Not many tourists go here. 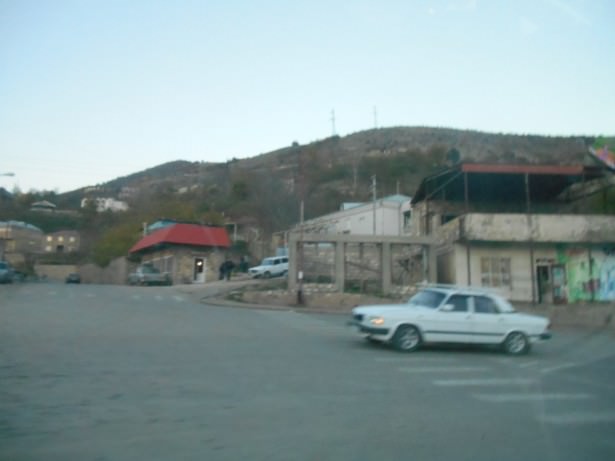 Nagorno Karabakh celebrated it’s 25 year Republic Anniversary in 2013 – dating back to 1988, before the fall of communism. The early years of the republic had widespread violence and war. At the time the people were mostly Armenian (over 70%) and Azerbaijan wanted the land and didn’t recongise it as a republic. Sadly this led to a war, a lot of bloodshed and well, from 1994 there’s been a ceasefire line and a huge military presence in this mini republic. The capital city is Stepanakert and the country houses 150,000 people. 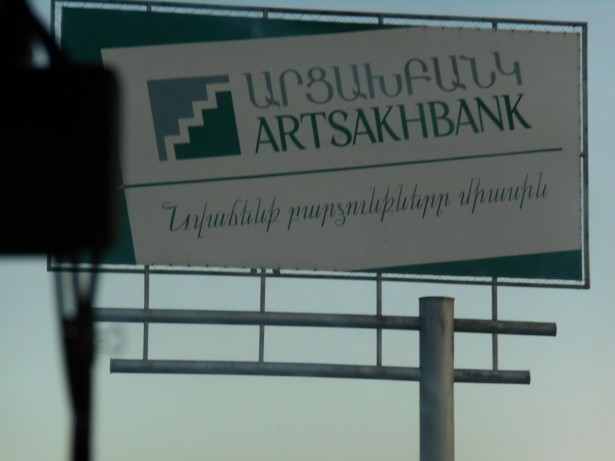 First sign we are in Artsakh/Nagorno Karabakh is a bank advertisement!

Your Options on Getting from Armenia to Nagorno Karabakh

Options are very limited in this regard. There are no trains, and at the time of writing no flights. There are a few regular bus routes but there appears to be only one constantly open land border. Your options basically are: 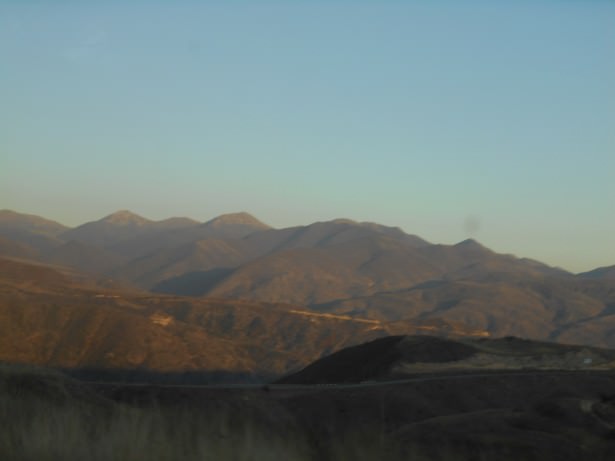 This is the wilderness mountainous area which separates Armenia from Nagorno Karabakh. It’s completely sparse, and officially you’re in Azerbaijan. 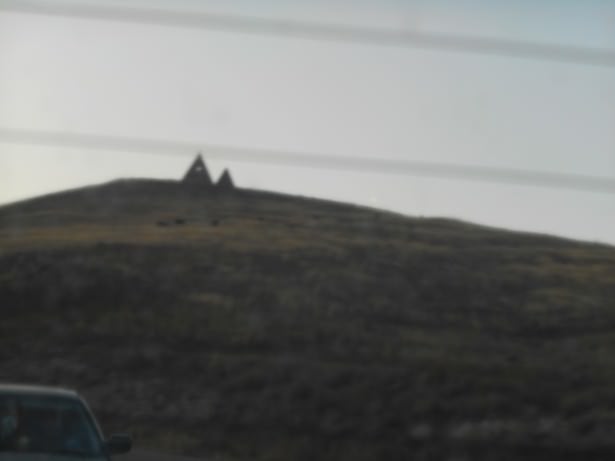 This random marker is the start of Nagorno Karabakh.

Marshrutky is probably the cheapest bet as you’ll be sharing with others and you can go direct from Yerevan to Stepanakert by Marshrutky. There are about 3 of these per day, all leaving from Kilikya Avtokayan bus station (6 Admiral Isakov Poghota). This will take you direct and will leave when full. They are slow but the cheapest option at around 10,000 Armenian Dram. However because they are direct, you will miss a few sights along the way, hence why we chose to pay a bit more, go with a driver and see a few top sights. 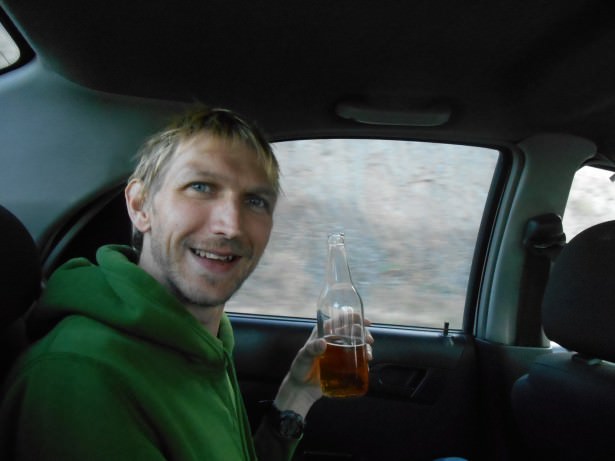 Having a beer in Armenia in the car before crossing into Nagorno Karabakh.

We chose option 2, went with a driver and got him to take us to Khor Virap, Noravank and Tatev Monasteries all on route from Yerevan to Stepanakert. I’d recommend this option. We got a bargain for 35,000 Armenian Dram, with our driver even taking us right to the door of our homestay in Stepanakert and making a load of stops on route for photo taking. That was for myself and my girlfriend, so 17,500 Dram each, which amounts to around 30 Euros each. Considering the waiting time, the price of petrol and the long drive not to mention the numerous stop offs on route, we felt this was a great price. We organised it through our hostel, the awesome Penthouse Hostel in Yerevan. If you get it cheaper than us, well done! And if you pay a bit more, don’t worry – it’s a great border crossing to do! 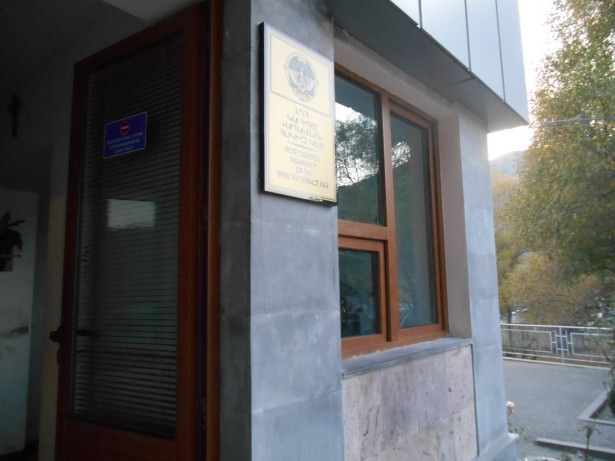 The immigration office at the border entrance to Nagorno Karabakh.

Do you need a Nagorno Karabakh Visa in advance?

No you don’t – you can get it on the border or on arrival in Stepanakert. I wrote a full post about this here: How to get a Nagorno Karabakh Visa. 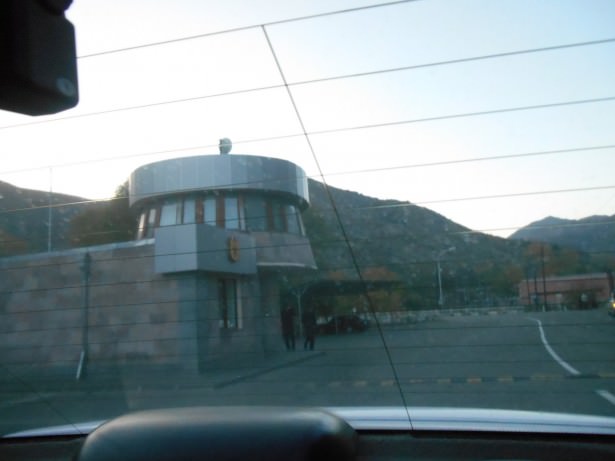 Leaving the border checkpoint – we are now in Nagorno Karabakh.

Leaving what is officially Armenia will see you pass by Goris and then enter a load of twisting, winding roads on route to the village of Tegh. There is a petrol and gas station at Tegh, which is the last settlement in Armenia before crossing into Nagorno Karabakh. There is no exit stamp for leaving what is officially Armenian land. This is because they know you’re coming back into Armenia. There is no other exit point from Nagorno Karabakh at present, other than to come back into Armenia. 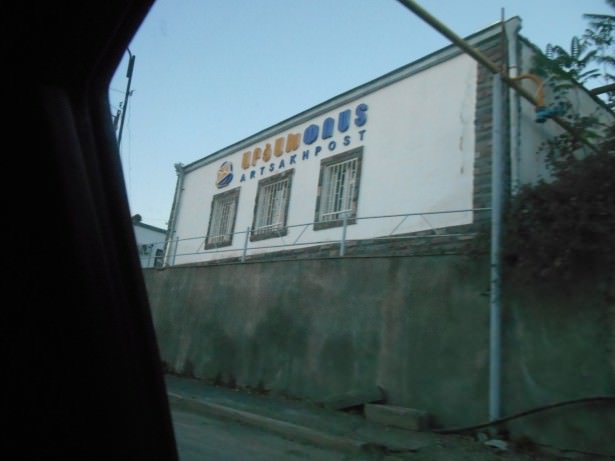 The Azerbaijan Section – How Confusing!

This might sound hard to believe but when you leave Armenia and before you enter Nagorno Karabakh, you are driving on roads that twist and turn through the epic mountains. Geographically these roads are part of Azerbaijan, so in theory you have to drive through Azerbaijan without a visa to get from Armenia to Nagorno Karabakh. I’ve studied this on maps lots of times and can’t quite fathom it!! I guess Armenia will claim it’s their land, but the way it looks on a map makes it seem that Nagorno Karabakh is a landlocked country within Azerbaijan. The entire area is mountainous anyway so it’s all no mans land and not really ideal for settlements to occur. 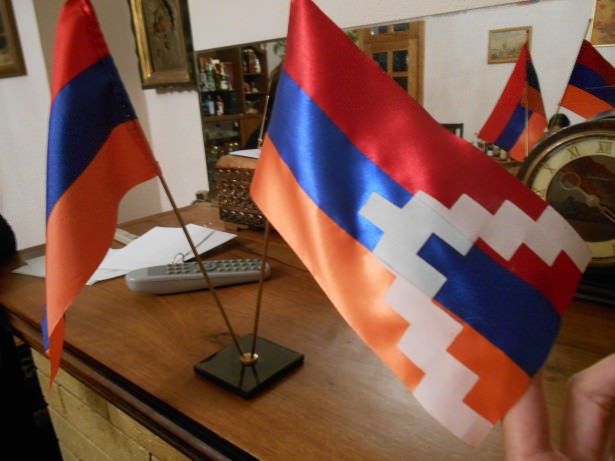 I was making a video when our driver Armed informed us that we were now in “Karabakh”. The marker was a monument on a corner on this twisting road. After this you will see a few other signs on the road with Karabakh written on them. There is also an advert for Artsakh Bank, so you’re now in Nagorno Karabakh. However it’s a few kilometres of twisting road until the actual immigration and border checkpoint. Perhaps this has to do with the fact that part of the land is in Azerbaijan. 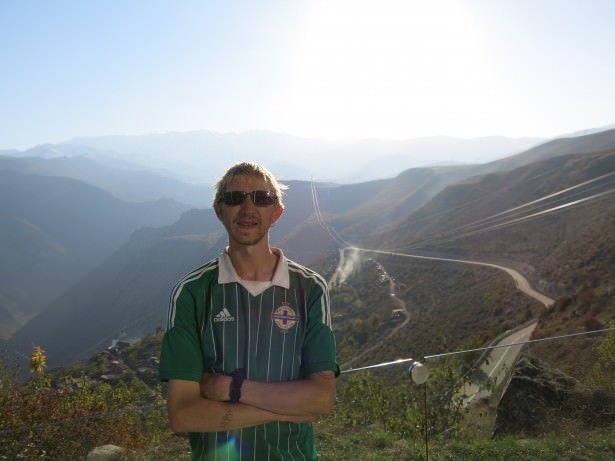 You’ll turn a corner and cross a bridge then you’ll see the checkpoint. It’s a small building on the right hand side. On the left hand side are the flags of Armenia and the Republic of Nagorno Karabakh. You need to get out of the car and either show your visa, apply for your visa or simply tell them you will get your visa in Stepanakert, if you’ve read my Visa process post, then you’ll have noted that it’s just easier to get the visa in Stepanakert. 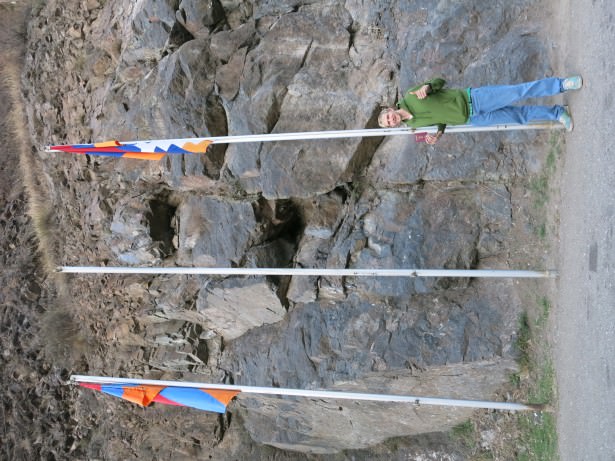 So if you’re doing this, as we were, at the entry point all you will need is:

After that they will give you a piece of paper telling you to go to the Ministry of Foreign Affairs on arrival in Stepanakert, here’s the address: 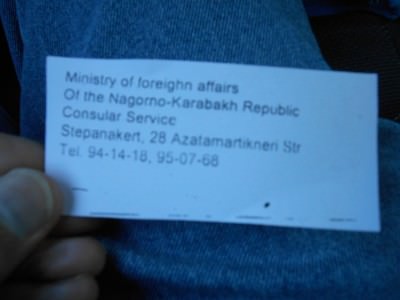 This is the piece of paper you will be given on arrival in Nagorno Karabakh.

There will be no entry stamp issued here. Get back in the car and off you go. 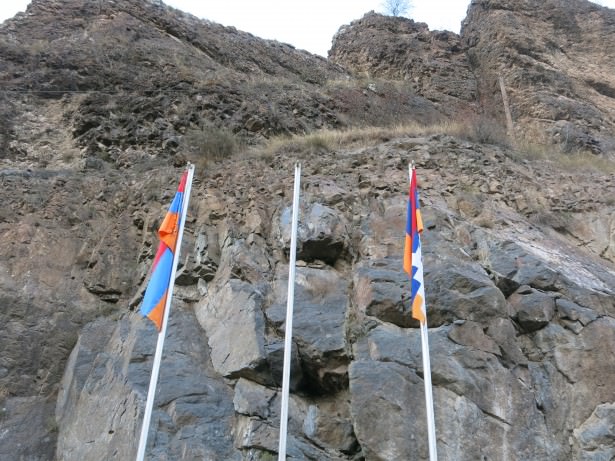 The flags at the immigration checkpoint in Nagorno Karabakh.

How far is it from the border to Stepanakert

It’s quite a trek! Mainly because the roads are twisting and winding all over the place! As the crow flies, it looks about 30 kilometres, but it’s double that at least thanks to the road layout. It took us about 2 hours to get to our homestay in Stepanakert. 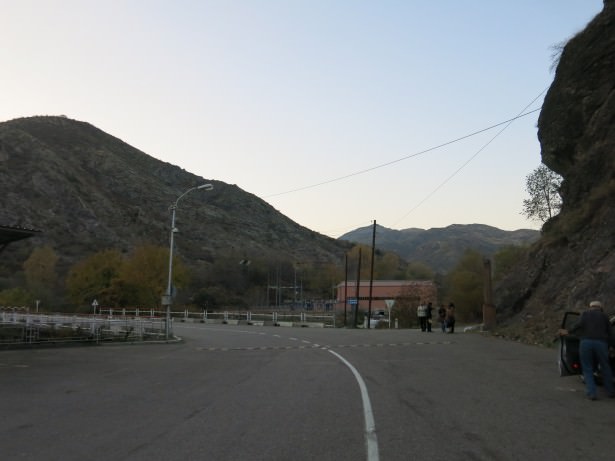 The bridge where the corner marks the start of the republic of Nagorno Karabakh.

So guys that’s my full guide on how to get from Armenia to Nagorno Karabakh overland. I hope you read this and use my advice here. It’s a great country to check out – somewhere well off the tourist trail and with that dangerous edge to it. You can read my articles on Vank, Gandzasar, Askeran, Agdam and the lunatic marshrutky rides. Safe travels.

Here are my videos from crossing the border into Nagorno Karabakh from Armenia:

19 thoughts on “World Borders: How to Get from Armenia to Nagorno Karabakh (Tegh to Berdadzor)”