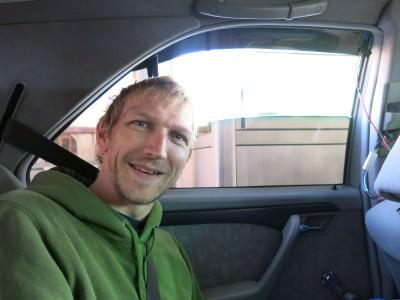 On the way to Armenia – country 80 on my hit list.

In my latest episode of world borders, I’m covering the border between Georgia and Armenia. I admit I’m well behind in this series (not enough time to update the numerous borders I’ve crossed) but this one will fill in the pieces on my current Caucauses backpacking experiences. Here’s my rundown on how to get from Georgia to Armenia overland between Sadakhlo and Bagratashen. 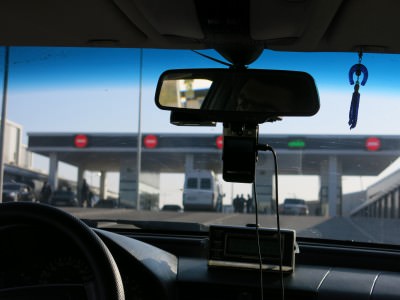 The border point for leaving Georgia at Sadakhlo.

Most backpackers heading overland to Armenia will be coming from Georgia. The reason for this is that Georgia is visa free for most countries, and the land borders with Azerbaijan and Turkey into Armenia are closed for political reasons. Coming north into Armenia from Iran is also an option, but for the basis of this post I started my journey in Tbilisi, a common stop over city while backpacking in this region. I loved Tbilisi and have used it as a base here. To leave Tbilisi to headto the border, the best option is to get to Ortachala Bus Station. 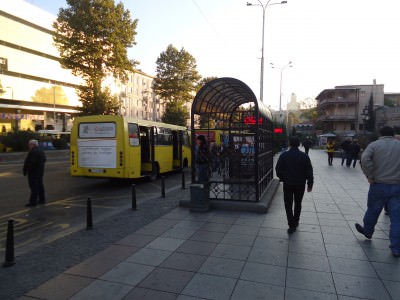 Getting a yellow bus from Old Town Tbilisi to Ortachala Bus Station.

To get to Ortachala Bus Station from central Tbilisi get a yellow mini-bus number 71 or 80. They leave from near the Clock Tower in the Old Town. This will cost 50 Tetri and should take less than 20 minutes. 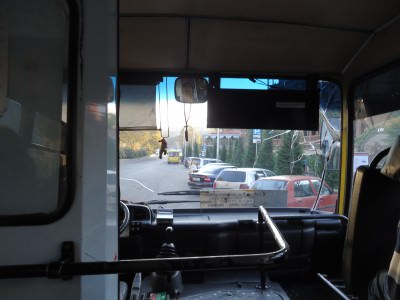 On the bus to Ortachala Bus Station.

On arrival at Ortachala you will have the option of bus or taxi. Now normally I hate taxis and always side with buses. But then ridiculously the price of the bus and the price of the taxi was the same. We were quoted between 30 and 40 Lari for a one way ride to Yerevan, including all the border stuff on route. A direct taxi it was then for 30 Lari. Incidentally the bus also costs 30 Lari. So for once you can bite the bullet and take a taxi without having to worry about paying more. Of course I was sharing the taxi with my girlfriend so that halves the price. Find four people and you can get in a taxi and beat the price of the bus. You don’ have to go directly to Yerevan of course, so could get it for less, just to get you across the border. However the roads are remote so onward transport will be tougher and most people hitch hike. I’d advise getting a bargain with a taxi driver to take you all the way from Tbilisi to Yerevan. If you’re travelling alone though, a bus is the better option. They run from 8am onwards until around 5pm. 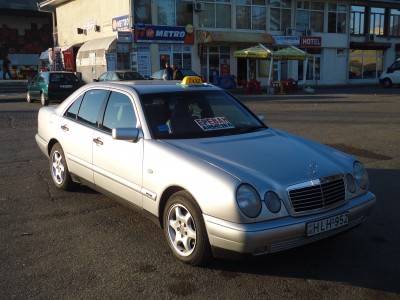 World Borders: Georgia to Armenia a taxi is the best option.

How far is it from Tbilisi to Sadakhlo?

We left Ortachala Bus Station around 8.30 am. The border is only about 50 kilometres south to the exit point at Sadakhlo. It will take you less than an hour. 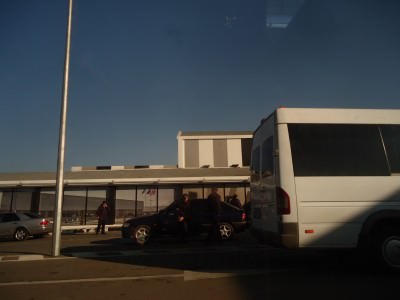 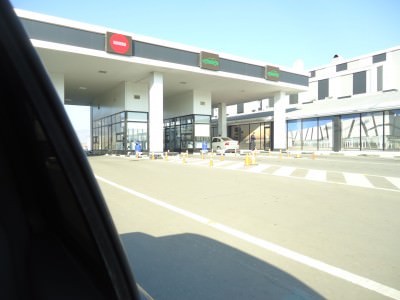 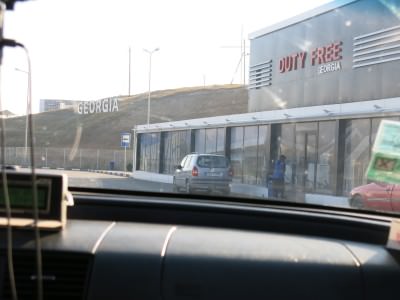 Arriving in Armenia at Bagratashen

After driving across a bridge, which is the border between Georgia and Armenia, we are now in Armenia. 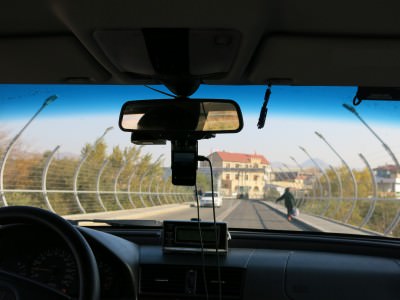 World Borders: The actual bridge between Georgia and Armenia.

Again we drive up to a booth and this time approach an Armenian border point, where a smiling guard greets our driver. Our driver, Sako offers the guard some cake or bread. This time, the guard says yes. The reason being, he’s Armenian and the cake/bread is Armenian. We also help ourselves and I sip my coffee which I made for my flask in Tbilisi. 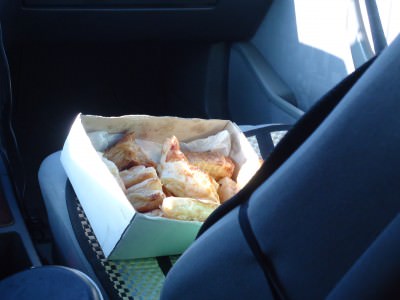 Our Armenian driver bought us some bread which he shared with us and the border guards.

After taking his mid morning snack, he has a look at our passports. I’m on an Irish passport, my girlfriend is on a British Overseas passport. Both passports have an Azerbaijan Visa in them, from our recent trip there. 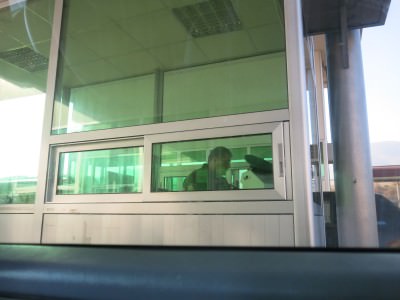 One of the Armenian border guards in the booths.

We get our stamps and are handed back our passports. Again no forms to fill in, no bags are checked and everything runs smoothly. The entire process has taken about 35 minutes, both sides of the border. One of the fastest land borders I’ve ever done. 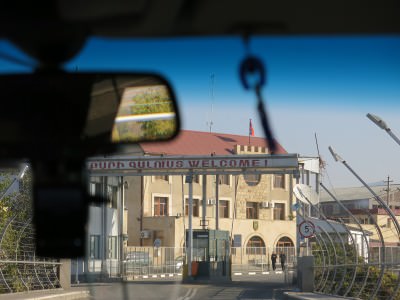 The welcome to Armenia sign taken from our car.

Easy to get into Armenia with an Azerbaijan Visa on Your Passport?

Yes – ridiculously easy. In fact, as the Armenian border guard checks our passports, he sniggers to himself on seing the Azerbaijan Visa. So getting into Armenia after being in Azerbaijan is no problem. Going the opposite way is harder. So if you’re in the area, take the hint and either do Azerbaijan first, or use a different passport if you do it second. 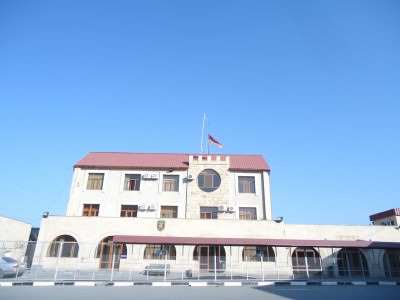 Armenian building at the border with the proud flag.

How much does an Armenian Visa Cost?

For Irish and British citizens it’s currently free. That means free from everything. Free from paperwork, no visa is placed inside your passport, free from paying and just FREE. Pretty amazing heh? Yes currently all you get when you arrive in Armenia at the Bagratashen entry point is free. 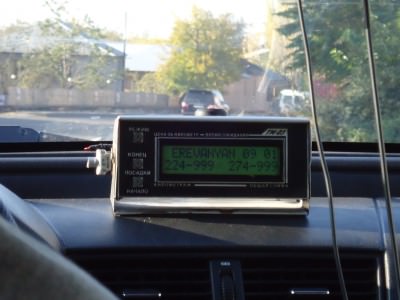 On the way to Yerevan, Armenia.

How long can you stay in Armenia for?

Officially it’s 21 days, which is time enough to see the country, and also veer into Nagorno Karabakh to curb your curiosity. The 21 days can be extended with a small fee, payable in Yerevan. 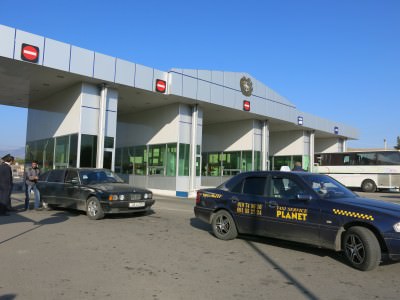 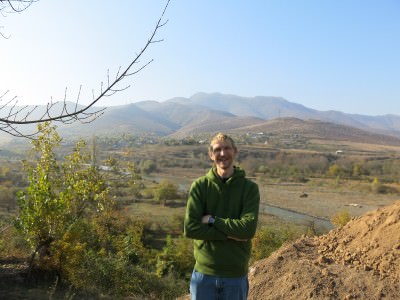 World Border successfully crossed! This photo was taken just across the border into Armenia.

Once You’re In Armenia Does this mean you can get into Nagorno Karabakh?

In theory yes as you need to be in Armenia to get into Nagorno Karabakh to start with. BUT you’ll need a separate Visa and Visitor Permit for Nagorno Karabakh. I’ve just crossed this border as well and will be covering it in due course.

My passport stamp for leaving Georgia: 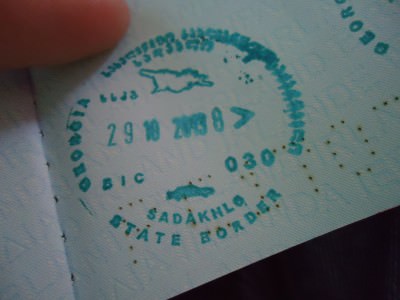 My passport stamp for arriving in Armenia: 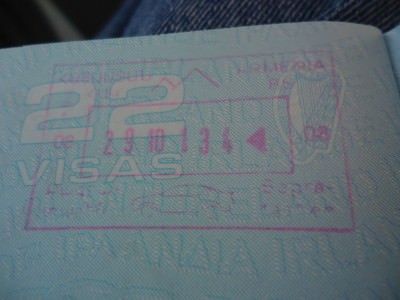 Once you arrive in Armenia, how far is it to Yerevan?

Depending on traffic and weather it can take between 3 – 4 hours. However we spoke to our driver to get a few stop off points on route to go sightseeing and we arrived in Yerevan around 4pm. The entire journey from Tbilisi to Yerevan took us about 7 and a half hours including stops, so you could easily do the whole thing in 5 hours at a push.

Any other options for this border crossing?

Of course! Lots of backpackers get the night train, which can take up to 15 hours and costs a bit more, though you do get a bed and save a night’s accommodation. There are other land borders too, which can be crossed by bus or car.

You’re in Armenia and for sure you should go sightseeing all the monasteries! This is one of the oldest Christian countries on the planet and needs to be seen. 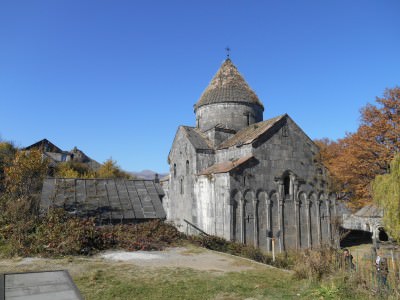 39 thoughts on “World Borders: How To Get From Georgia to Armenia (Sadakhlo to Bagratashen)”