Growing up in Northern Ireland during what many globalites know as ‘the troubles’ was actually a joyous and wonderful time. There was comedy in tragedy and we often laughed within ourselves at the sheer randomic banter within the glorious six counties. We have loads of real towns. People actually live there. They work, eat, sleep, drink and play football. But while on a train on my travels, I came up with a list of FAKE Northern Irish towns. None of these ones actually exist, but they could. You cannot backpack through these – it’s just for fun. 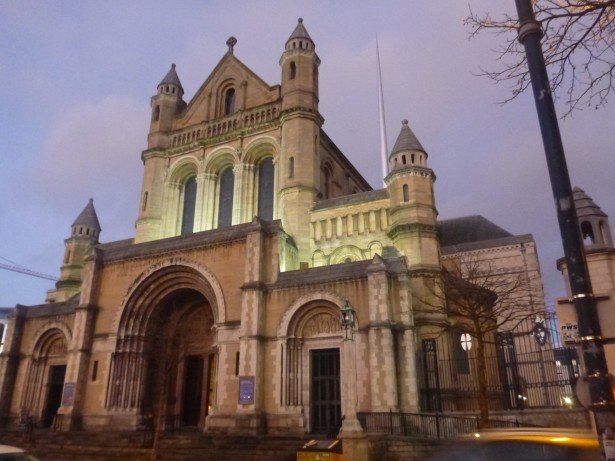 Five Northern Irish Towns That Don’t Exist But Should

Ballyclava is a fictional Norn Iron village where residents wear woollen items till cover their bakes. The town was formed as part of the Black Friday Disagreement and is famous for being the world’s first ever self-declared ‘pipe bomb republic’. Any bombs other than pipe bombs are illegal in Ballyclava and locals are enrolled into pipe-bomb training after donning their balaclavas from a young age.

Christmas Day is a national holiday in Ballyclava, locally known as ‘nudist day’. But don’t be expecting to see willies, boobies and fannies – by ‘nudity’ they mean the only day in the year when you can actually walk the streets without yer balaclava on!

However, there have been downsides to this unique culture – the town has attracted a huge influx of Muslims in recent years as Saudi Arabians got mixed up that it was an Islamic pipe bomb republic, after seeing a Facebook post where you could only see people’s eyes. They saw it as a perfect place for Islamic women to settle. Rumour has it that local teenagers from Ballyclava have recently ‘done the dirty’ on their fellow Northern Irish townies by sleeping with the Arabian immigrant, using the excuse “I could only see her eyes so how did I not know she wasn’t a Protestant?” The town’s spokesman Muhammed McGuinness released a statement saying “we are fine with mixed marriages as long as ample head gear is worn at all times and we can only see yer bake and yer eyes”. Another political resident of the city, Mr. Abdul Trimble has requested segregation using coloured balaclavas. By law, Protestants must now wear orange balaclavas, Catholics must wear green balaclavas and the Muslims must wear black balaclavas. Unfortunately no other colours of balaclava, nor facial nudity will be accepted in the city. This has led to sectarianism, with those of other religions along with athiests being forced out of their homes. They have relocated to nearby Portyerhole for the time being.

Since that period of high tension, new-age extremists in Ballyclava have removed their headwear in a shock move for civil rights and facial nudity. However 93% of the town still wear their balaclavas 24/7.

We’ve all heard of Armagh City, hell, some of us have even been there, but isn’t it a tad sexist to have a city (town) named after your Mummy but not your Daddy? To make up for it, Armagh has twinned itself with the completely made up town of Ardagh, which is locally pronounced ‘Our Da’. There is a direct root between Armagh and Ardagh, and in 9 months time, there will be a spin-off settlement known as Arjimmy, pronounced “Our Jimmy”. The Queen has visited the town of Ardagh but refused to grant it city status as yet, claiming that Armagh wouldn’t be happy if Ardagh had the same status as her new next field neighbour. The sign on the entrance reads “Welcome to Ardagh City”, with the word ‘city’ in inverted commas. In football however, there is a local knockout cup called the Arcup. This year it was won by the even more remote village of Argranda, who smashed Ardglass ‘thee nil’ on penalty bricks in the final.

Magherafry is a joint Northern Irish-US settlement that was built after a huge argument between Americans and Ulsterites over which country produced the best food. In short the debate was between a cheeseburger and a fried breakfast. Americans who visited Ulster brought greasy cheeseburgers with a yellow M symbol on it and they started calling them “Big Macs”. One resident of a real settlement nearby, Magherafelt, lodged a complaint after telling them that the words “Big Mac” are copyrighted in the six counties. He claimed this is due till thon fact that Gareth McAuley is the only man in Ulster allowed to possess the title “Big Mac” after he headbutted balls past Ukrainians in the famous ‘battle of Lyon’ in 2016. However, wee Sammy from Maghera tried one of these cheeseburgers and said he liked it, so they came to an agreement to call it a “Mac”. A local lass called Dierdre O’Neill then said that the only legal food in Northern Ireland should be the Ulster Fry.

In a peaceful agreement, the “Mac” fans from the USA (headed by Davy McDonald) and the “Fry” fans from rural Ulster came to resolution to move the debate to a new city and rename that city in honour of both greasy foods. They couldn’t decide on the name of the city and kept saying should we call it “Mac or a fry”? Eventually, some clever clogs wrote a wee sign that said “Magherafry” and it seemed to fit. The only issue since has been that strong Ulster Fry loyalists have scored out the ‘magher’ part on roadsigns, so the town is merely known as ‘A fry’. American radicalists spearheaded by Donald Trump are trying to coerce Ballymena Borough Council to change the name of the village to simply “Mac” on the understanding that Gareth McAuley does courses in how to head the ball to local school kids.

Foodies love the place though, as by law every restaurant must serve a Mac or a Fry. The black pudding, vegetable roll and Tayto bap have ensured the town is to be the next host of Ready Steady Cook.

Northern Irish people love to call their towns after a port. First there was Portavogie, then came Portaferry, then Portglenone and so on. These names made sense as they all had some kind of port or harbour by them. Recently, in a complete shock move, a rural village with absolutely no coastline or seaside port whatsoever has called itself “Portyerhole” in an attempt to lure idiotic tourists to their streets. There is currently an investigation by Watchdog into the sincerity of the town’s tourism approach. A hotel in the city opened recently, classing itself as a “coastal resort”, claiming to have “a seaview” and “beaches”. The town’s website was flooded with requests and tourism boomed recently with a huge social media campaign based on the Twitter slashtag #portyerhole.

One angry tourist claimed she was promised a sandy beach, bit instead got an angry bitch. Another couple questioned the town’s Lord Mayor about their non existent “seaview” only to be told that they run a shuttle bus to every Crusaders home match. Stephen Baxter has revealed that the town’s tourism increase has had a positive effect on Irish football league attendances and his team now use Portyerhole for its training facilities.

Rory McIlroy recently opened the town’s first golf course and Portyerhole has been named as the next host of the Ryder Cup. The irony being, with all these bunkers, the tourists finally got their sandy beach.

Cushendall and Cushendun are pretty cool resorts in Antrim but not quite as cosy as wee Cushendsofa. This place is the home of the finest furniture warehouses in Northern Ireland. The company specialises in ‘designer sofas’, spearheaded by their head designed, Peter Couch. They make settees suitable for Buckie swiggers, with a built in pipe straight from Buckfast Abbey, ensuring fans of the English drink can drink fresh buckfast while watching Newsline. There is also a special ‘retired terrorists’ settee which has no arms. They are also developing a sofa which allows politicians to hide their ammunition inside the actual sofa so that when the peelers come calling, they won’t find their weapons. It’s not just settees, couches and sofas that the company produces though. Their cushions are meant to be superb. Local snooker heroes Joe Swail and Mark Allen now reside in the town claiming “we love to leave our balls by the cushion” and we can truly relax in Cushendsofa.