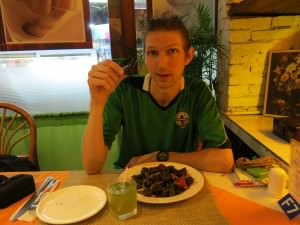 Friday’s Featured Food – eating snails in Yangshuo in the Guangxi Province of China!

Friday’s featured food today comes from Yangshuo in China’s Guangxi Province. Despite visiting France countless times I never once tried snails. Or l’escargots as they are known in France. So when I heard that Guilin and Yangshuo have their own speciality dish of pan fried snails I had to try them. If you have followed my journeys around the world you will know that I have tried a range of unusual and special delicacies from various different cultures. 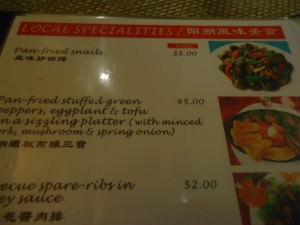 Snails were on the menu this week in China’s amazing Yangshuo City!

I must admit I dont always warm to these new foods. However I have eaten dog in Korea, turtle in China, wallaby in Australia, guinea pig in Peru and Eel also in China. With the exception of wallaby, i didnt try the other ones again because I tried them once for the experience and although i enjoy sampling them the taste of those other foods wasn’t really that nice. So did i enjoy eating snails in China? Again my reason for wanting to eat them was the curiosity factor. 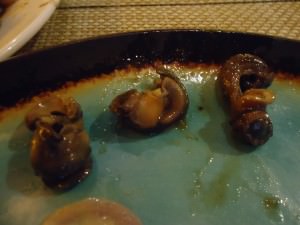 Up close to my pan fried snails in Yangshuo, China.

So while staying in gorgeous Yangshuo the time was right to eat my first snail. We walked through the pedestrian streets of Yangshuo by night. A sense of wonder filled the evening air as did torrential rain so we headed to an Italian restaurant of all places. As well as having a really good selection of Italian foods, this restaurant also serves lots of Chinese food. 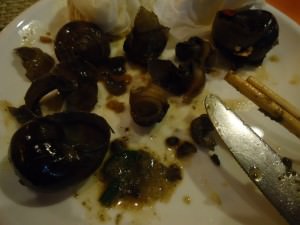 Up close and personal to the snails in China- but how do you eat them?

The one that shot out at me was of course the snails. On the menu the snails were priced at 28RMB. That works out at around US$3. Even if I didnt like them I knew it would be a one off meal to try. When they arrived I was completely surprised by how many snails were on the plate and the random vegetables and sauce that accompanied them. 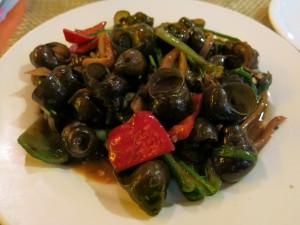 The full plate of snails! Big helping of them!

Now the question i asked myself was how do you eat them? For a start obviously you dont eat the shells. However the entire meat from each snail is inside the shell. I admit I wasnt sure how to eat them…

1. Do I use a knife and cut into the shell to gain easy access to the snail meat?

2. Do I act like a French person and try to suck them out?

3. Do I stick a chopstick into the hole and push the snail meat out the other side?

4. Or do I take my girlfriend’s useful tip and use two cocktail sticks to prise out the snail meat?

After trying options one to three it became obvious that option 4 is the best. My first taste of snail meat was accompanied by a small piece of shell and I actually thought the snail tasted OK. But I soon realised that by pulling out the snail meat with 2 cocktail sticks is easier. The meat is an odd shape. The main part of the snail is fat, chewy and partly transparent in colour. The rest of the meat is brown and a bit guey. 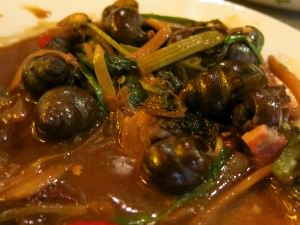 The snails in the sauce and the vegetables accompanying them.

I ate mostly the guey bit but realised it was the part of the snail that drags along the ground. On second thoughts it wasnt really that appetising. I wasnt really impressed by the snails and I wont be adding it to my list of favourite foods. I ate some of the vegetables and sauce and didnt really like them. I was beaten after about 6 snails. To be honest i didnt like them and I didnt want to force myself to eat them all. I sipped a Mojito cocktail and used it to destroy the flavour of the Guilin snails. I’ve tried them but I won’t again… 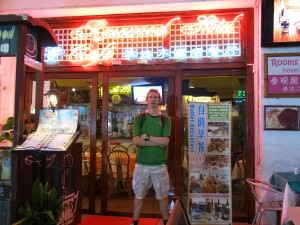 The restaurant in Yangshuo where I ate the snails.