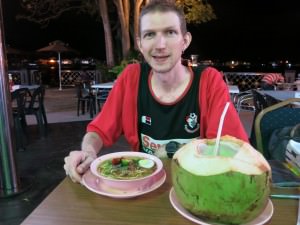 Brunei has featured quite a bit recently – it was officially my 70th country on my lifestyle of travel hit list so as you can tell I was pretty perky when I was backpacking my way round it. Dinner had to be something local, so we headed down to the harbour in Bandar Seri Begawan and I wanted to try the local Soto (a hearty soup). After gazing at the menu and ordering a fresh Coconut Juice, I opted for a Soto Biasa. Don’t forget that drinking alcohol in public is forbidden in Brunei (though we had a good night in the hotel!) 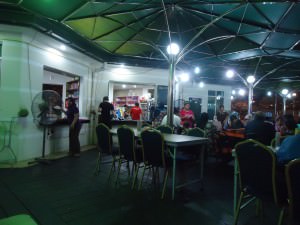 The restaurant area by the waterfront at Bandar Seri Begawan where we had the Soto Biasa.

Where in Bandar Seri Begawan did I try the Soto Biasa?

Head to the waterfront of Bandar Seri Begawan and turn left on the main promenade with the river in front of you. Walk until you reach a small bridge past the car park (the car park will be on your right, as is the river). The street on the left is Jalan Sungai Kianggeh. Walk over the bridge and to the right, at night time only is a small area of open restaurants. Seating is all outside and there are about 10 different restaurants. It’s local food and so prices are not inflated. There were no other backpackers eating there when we went – just locals. 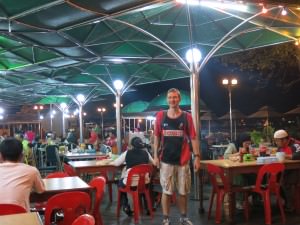 This is the restaurant area by the waterfront in Bandar Seri Begawan for night food.

Soto is a type of soup, commonly found in Asia. Wikipedia has a good easy to understand overview of it, even listing specific types – Soto on Wikipedia. It basically is hot soup with vegetables, spice and meat in it. It originated in Indonesia, and has spread to Singapore, Suriname, Malaysia and Brunei. 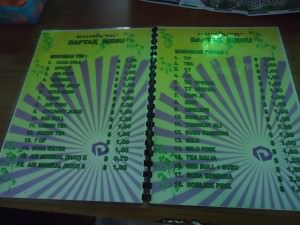 The drinks menu in Bandar Seri Begawan, Brunei. Of course no alcohol!

What is Soto Biasa?

It’s a soup with chilli, beef and vegetables in it. It cost me $3. Mine had lime, chilli, egg, beef, noodles and other vegetables and spices in it. 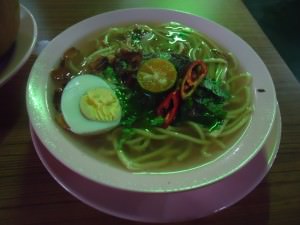 Very average – I ate all of it and left only the liquid – it’s a bog standard Asian meal. I’m not a big fan of these types of noodles, but I love diversity and I love trying new things so I gave it a try. I had to try something that was kind of local in Brunei. This was it. I preferred the coconut juice, so there you go. Still worth a try and decent value. 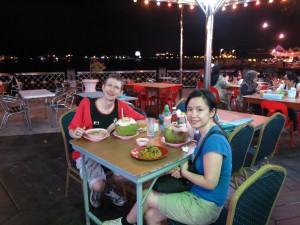 With my girlfriend loving our cheap and cheerful waterfront side food and drinks in Bandar Seri Begawan, Brunei.

A video of me at the restaurant before trying Soto Biasa in Bandar Seri Begawan, Brunei: