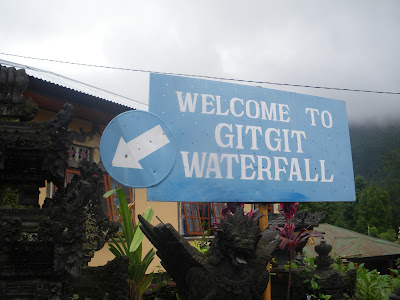 As I mentioned before, waterfalls rarely disappoint. In fact I have never met anyone who said “I went to a shit waterfall today”. This was a trip to Gitgit waterfall, not the most sensible title by any means but a cloudy misty day in North Bali ensured the weather would suit the occasion. This is just one of many sights from my time backpacking in Bali. 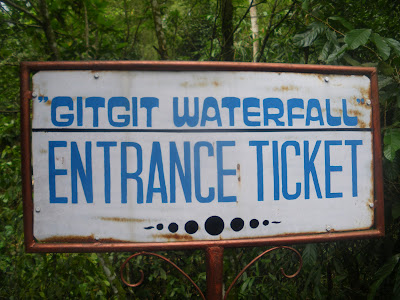 You had to pay entry. It was 6,000 Rupiah (about 36 pence), and there was a short walk through interesting valleys to the actual waterfall. 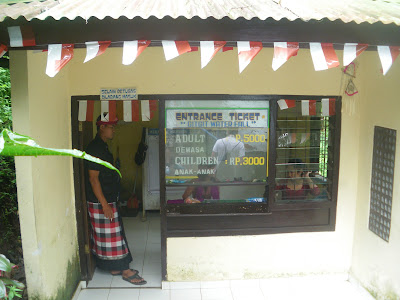 Ticket office. Like most places we visited in Bali, it was neither busy nor touristy. 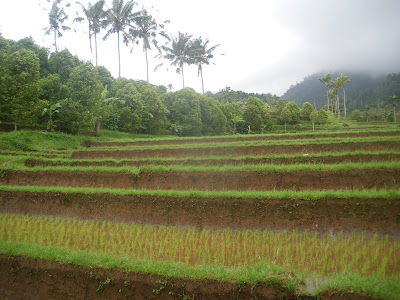 Rice fields are the charmful terrain of Asia. These layered levels of grass and soil are all used for growing rice. 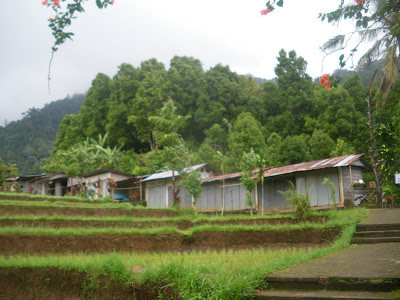 The people that collect the rice all live beside the fields. In places like China and Vietnam, these fields are almost endless in sections. Here in Bali they weren’t as plentiful. But let’s just say the world will not run out of rice anytime soon. 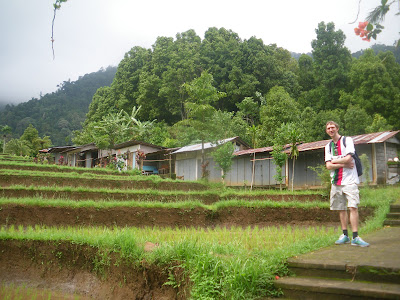 By the layered rice fields, on the walk to Gitgit waterfall. 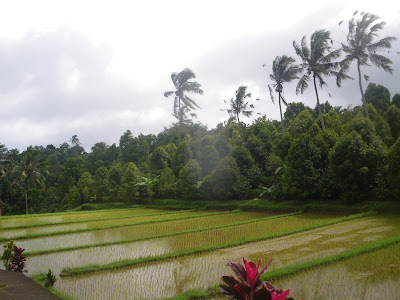 Rice fields – yes there is extreme rain in this part of the world, hopefully this shouldn’t affect the rice growth too much. 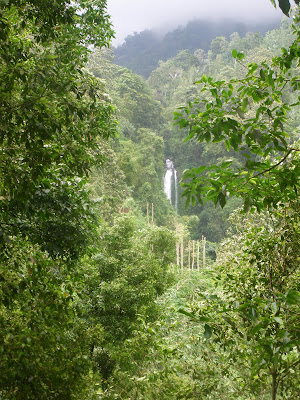 On the walk round we get an early glimpse of the waterfall. I wasn’t expecting the water to just pour into a lanscape of merely green! Amazing – not many rocks or thick brown tree trunks about. It was very green. 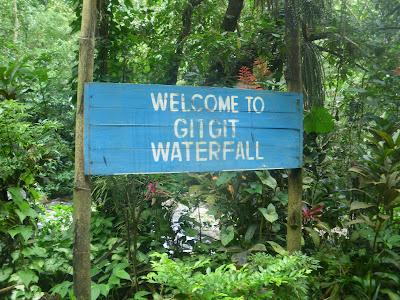 Welcome sign. I always photograph these in case I forget to make notes or remember the name of the actual place. Due to it sounding like a pair of rude people, I doubt I would forget Gitgit in a hurry! 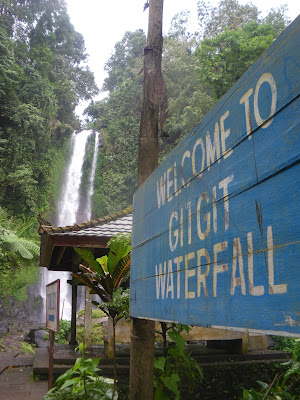 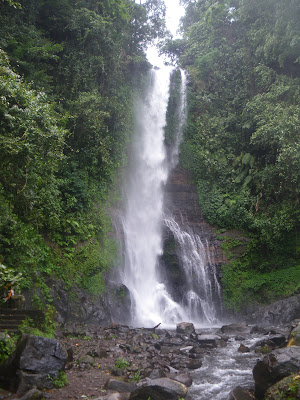 And close up we seen the rocks, the Gitgit waterfall drops from a height onto a very shallow and small river, surrounding by rocks. There were 3 other tourists there other than myself and Rodrigo. They were a couple and their child. 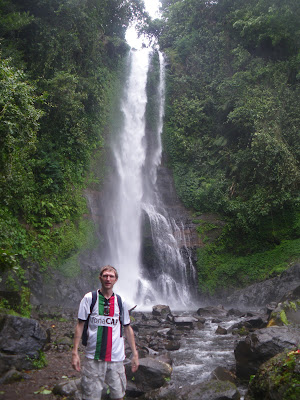 By Gitgit waterfall. Getting a bit of spray. Always a refreshing thing. 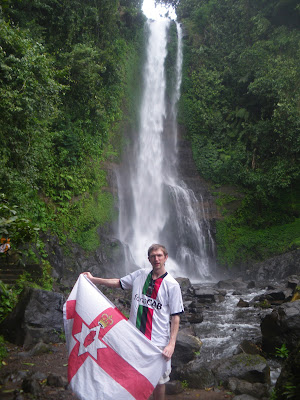 Gitgit kind of falls at a slight angle and veers back – might be difficult to tell that from the photos but it was very obvious when you are up close to it – the flag got a wee soak and an airing. 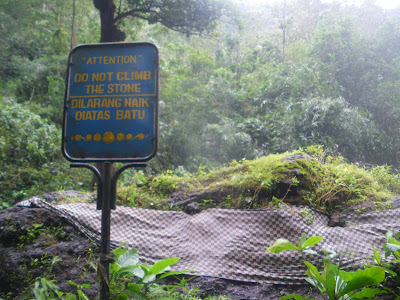 There are some rocks and stones nearby and you are advised not to climb, safety reasons of course. In the slippy wet misty weather it wouldn’t have been too advisable. Even the fittest and most careful of people could fall into the river and bump their head. 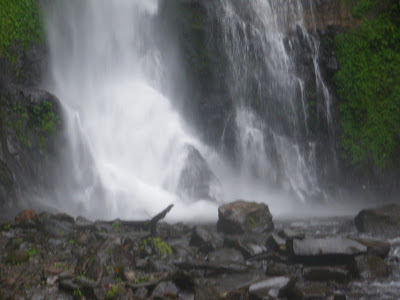 Where Gitgit meets the rocks. 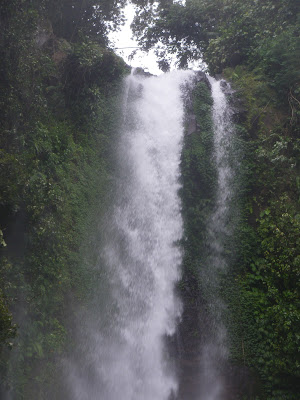 The top of Gitgit. 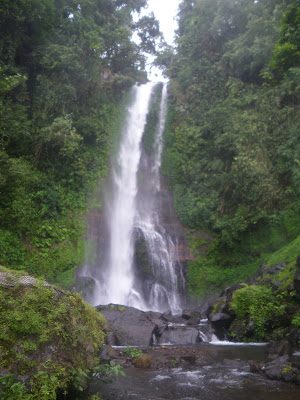 Can you spot the slight curve? 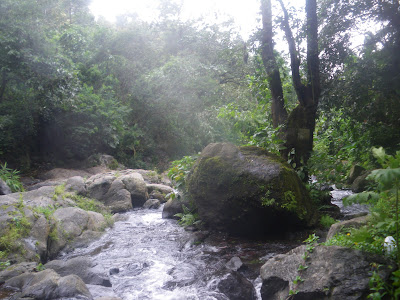 The river heading on down. 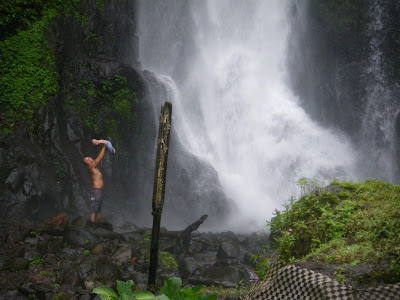 The couple that were there took their young child over to the rocks by the bottom of Gitgit. Rodrigo and I got a few photos of it – looked like a perfect photo moment. Imagine being shown that photo when you are older – you wouldn’t have remembered it. 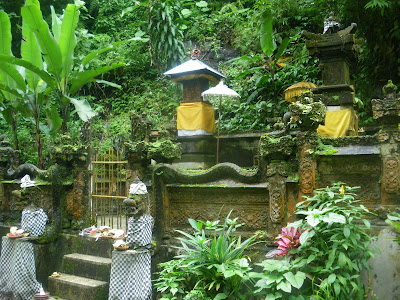 There was a temple beside it for blessings. I would have assumed it to be Hindu, though Muslims, Christians, Hindus and Buddhists have all passed through Bali in its time. It is of course now a Muslim country, Indonesia. But a relaxed one. Alcohol is available and fashion is up to the individual. 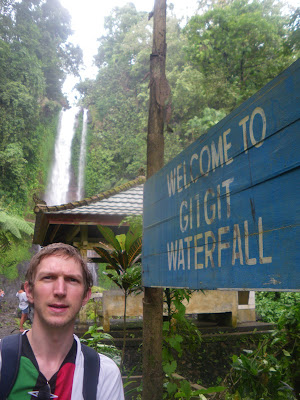 By the entrance. Loving the spray of Gitgit. Like I say “ever been to a crap waterfall?” 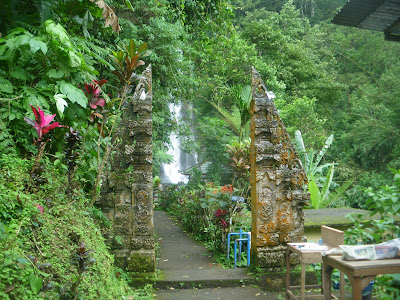 Final view of Gitgit through a pretty stone carved entrance. It looked Hindu to me. 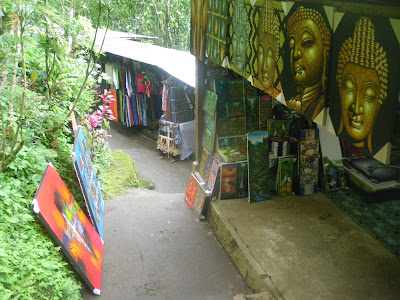 On the walk back there are many shops selling random souvenirs, mostly cotton scarves, t-shirts and paintings. 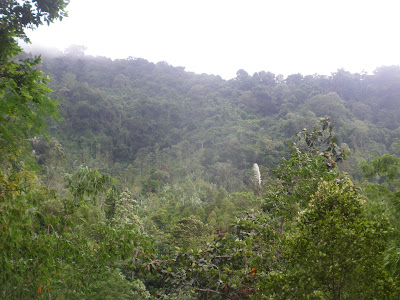 There was a viewing platform about 1 kilometre from Gitgit – how random the small sprouting waterfall looks amongst the greenery. This entire area reminded me of Guanshiling/ Kuan Tzu Ling in Taiwan. 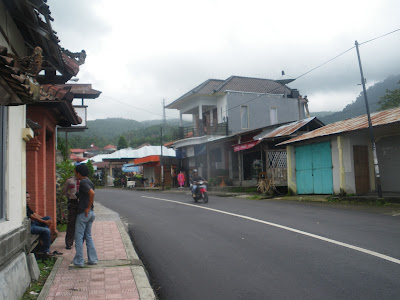 The village next to Gitgit. Typically Bali style. 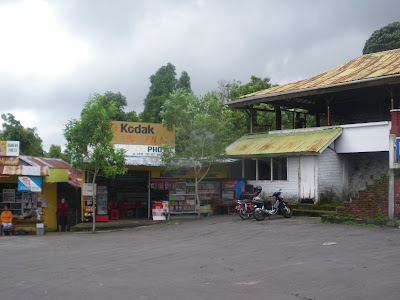 A few shops in the village. 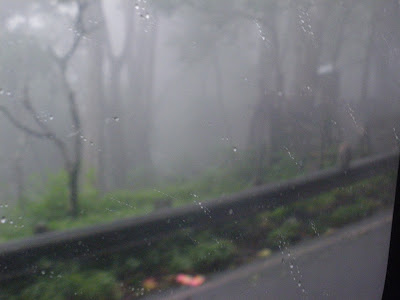 Rodrigo and I were on a day tour of the nearby area and travelled with a driver called Augus in his car. The day was one of changing weather conditions. The best of which was the misty, cloudy drizzle viewed from the car window above.
Where – 9 kilometres south of Singaraja, Bali, INDONESIA
What – Gitgit Waterfall
Information – http://www.indo.com/geo/gitgitwaterfall.html
Who Went – Rodrigo Codoy Coelho, Jonny Blair
Nationalities Met – Indonesian
Key Song –
ENYA – WATERFALL:
My Videos –
DRIVING TO GITGIT WATERFALL IN BALI:
AT GITGIT WATERFALL IN BALI:
Join 15,017 Monthly Readers! If you enjoyed this article and LOVE travel and SAVING money, get e-mail updates from Don’t Stop Living – a lifestyle of travel! (It’s Free) 😉 Jonny