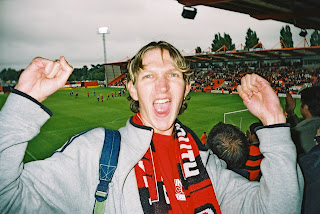 September 2004 came round, and AFC Bournemouth were playing some incredible football. We beat Sheffield Wednesday 1-0 at Hillsborough one Saturday in the league, then knocked Blackburn Rovers out of the Carling Cup the subsequent Wednesday night (a match which I went to and will recount at some stage), and then we had the task of playing Doncaster Rovers at home the following Saturday. After two impressive away wins in Yorkshire and Lancashire, surely we couldn’t make it a hat-trick of wins in a week? Surely the players would be too tired? And above all else we were playing Doncaster Rovers, who had just been promoted to the third division (League One) and the year before that they had been non-League, having slipped out of the football league for a period. Looking at back at this match now seems very very weird, and I recall saying to my housemate Dan Stead after the match “these three wins: this is as good as it will get for us…” How true those words were. At the time we were one of the best four sides in the division, having lost only to Colchester, Hull and Luton (all of whom would climb a league in the following few seasons), and now we sit second bottom of the entire league (Division Four/League Two), while we watch Blackburn Rovers compete in Europe every so often and maintain mid table Division One (Premiership) status, Sheffield Wednesday chase a play off spot in Division Two (The Championship) and even Doncaster Rovers climbed a division to Division Two (The Championship), where they struggle but still managed to beat Derby County away…the tables have turned since the day we THRASHED ALL THREE SIDES…here’s how we dismantled Doncaster… 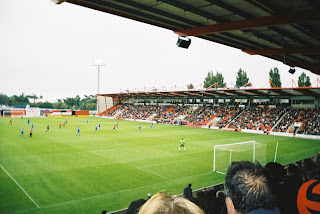 The weekend started well, on the Friday night I worked a 7 hour shift in the Heathlands Hotel, where some enthusiastic Doncaster Rovers fans were staying and were hopeful of a result “this is one of our biggest matches in the league since we came back up” one of them said to me “so we’ve made a weekend of it in Bournemouth to do the beach and bars as well.” I chatted with them and served them pints, before letting them know to watch out for James Hayter number 14 at the match. Then up early on the Saturday morning, I was doing some voluntary work for the Students Union, I was dressed in a red “Bournemouth University Students Union” top and was working acting as a welcome representative for the University to all newcomers (commonly referred to as “freshers” or “first years”). That morning I worked at Hurn House in Lansdowne, handing out room keys and welcome packs to the new starts. I remember meeting a Belfast girl called Emma and a Wolves fan, whom I spoke to about Mark Clyde (ex- Wolves and Northern Ireland, now retired). After this I started a pub crawl of my own in Bar Heat with a Carling pint, before meeting Neil and Austin in The Dolphin. Kick off was obviously 3 pm, so we didn’t have too much time, and headed to the ground where we also met Dancing Andy and Dan Stead (two of my housemates at the time; neither of whom supported AFC Bournemouth, but both of whom came to many matches to be fans for the day!). Once inside the stadium a drizzly rain befell Dean Court and the sky soon began to gape in on a poor Doncaster Rovers performance…

It was 3-0 after about 20 minutes, with Dani Rodrigues, James Hayter and Eddie Howe all scoring very quick easy goals. I seem to remember Rodrigues as a through ball from an error which he slotted home with ease, Hayter’s as a diving header and Eddie Howe as a hard, low shot from a corner. At any rate we were on fire and Doncaster looked a very very very poor side. Garreth O’Connor who had a great season, fired in a fourth on 25 minutes and we looked down from our North Stand seats towards the Doncaster end, asking why on earth did they bother coming. A very loud “GO HOME, YOU MIGHT AS WELL GO HOME” echoed for a good five minutes and the game was over by half time, in the second half we toyed with Doncaster, adding only one more and making it an impressive 5-0 win. We headed home in Dan’s car and had a house party that night, and if you’d have asked me then, I’d have said that we would get promoted and Doncaster would be relegated. By the season’s end, we only marginally finished above them, both missing out on the play off, and they even held us to a 1-1 draw up there at Belle Vue (their old stadium). The tables have turned fully, our manager that day Sean O’Driscoll soon left us, headed to Doncaster, took them up to the Championship and stole many of our players and staff. Funny old game? Yeah right, still I enjoyed the 25th September 2004: the day we thrashed Doncaster Rovers 5-0.

I took two photos that day, which I’ve included and couldn’t find much more on the match itself, though I have a match programme and a DVD somewhere with the goals, except this match report:

Bournemouth 5-0 Doncaster
Two goals from James Hayter helped Bournemouth condemn Doncaster to their heaviest defeat since returning to the Football League two years ago. Dani Rodrigues and Hayter headed in almost-identical goals inside the first five minutes for the Cherries. On-loan Portsmouth defender Eddie Howe slotted in a third, before Irish star Garreth O’Connor fired in off the post.
And Hayter completed the rout and capped a good display in the second half with a close-range shot.