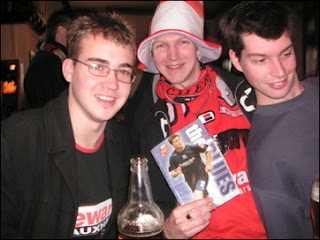 We sang “going up you’re having a laugh” at the Southend fans that day. They were just sitting in a play-off place at the time, and indeed inspired by Freddy Eastwood, that season the Shrimpers did eventually go up, winning the league and taking their Essex rivals Colchester United with them. I went to the match with Neil and John, neither of whom are Bournemouth fans, but both of whom enjoy a day out! Originally we were going to get a train there, but instead I had decided to spend new year in London, and then John volunteered to drive us all the way from Dartford to Southend. As a football fan, I always love the entire experience. Different stadiums, goals, beers, songs, the lot. We arrived in Southend about 3 hours before kick off. 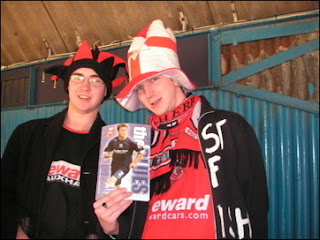 John drove us via the seafront which was graced with an English December sun that day. We then parked near the ground, walked past the club shop and bought a match programme, before popping into the nearest pub for a pint or two. It was The Golden Lion. The pub was very quiet that day. It seemed like a pub for both home and away fans and as such, I got chatting to a few Southend fans, who were a bit upset at the 0-0 draw at home to MK Dons a few days earlier. They were ambitious and optimistic about the club getting promoted. I didn’t see it at the time, but they were a good side. Back to back promotions ensued. The pub also had a “Bullshit Corner” with one of the regulars famed for talking shit and placed in this corner. John loves talking shit so me and Neil put him in the corner while we sipped real ale. 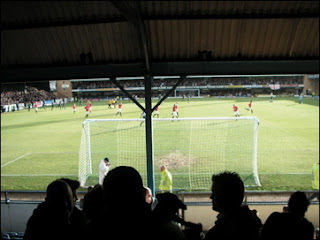 The pub was really close to the stadium. We were in the AFC Bournemouth away fans end behind the nets. There was no alcohol available in the away end, which I was upset by. I always think that football clubs, miss out on easy money by denying fans a beer in parts of the stadium. Out of spite, I normally don’t buy anything from them if this is the case! Not many Cherries fans were at the match, quite disappointing really since it was New Years Eve, two decent sides and a nice trip to a beach at Southend. The three of us stood in the back row, the seats were ridiculously narrow and I think yellow. I wore my Northern Ireland top hat which often accompanied me at matches until I lost it on the Isle of Wight one day. Before the match and at half-time there were Southend cheer leaders, all local Essex girls with gorgeous bodies. They danced on the pitch with poms poms and the scene was set… 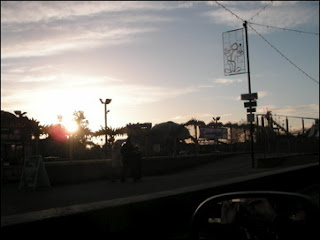 Cherries centre half Neil Young got himself sent off stupidly, as the last man in the first half and this gifted Southend an early penalty. Freddy Eastwood slotted the ball home and suddenly we went in at half-time 1-0 down and not playing well at all. The second half we came out the much better side, time and time again Foley and Hayter threatened a breakthrough, before the ball fell kindly to Steve Foley who slammed home an equaliser in front of us. We were looking good for a draw until Southend’s Kevin Maher beautifully lobbed the ball past Neil Moss for Southend’s winner. On the day they shaded it and it was actually the first time I saw AFC Bournemouth lose an away league match (of course many away defeats were to follow…). After the match we did some food in Subway and John drove us round the town again. The Southend fans had sung “Happy New Year, Happy New Year” at us on our way out. It was all a bit of comedy and five months later they had jumped through the division and would be in the Championship.