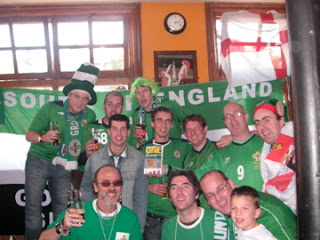 However it is reported in folklore, the history of how the club was actually formed could easily be attributed to any of the following:
1. The club began in Berlin when a culture-struck Jonny Blair met the beer-hunting Tim Beattie in a Sailor’s Bar near Oranienbergerstrasse on Easter Monday 2005 (March 28th 2005).
2. The club began on a party train from Berlin to Warsaw when a seatless Jonny Blair bumped into Owen Millar in a train corridor full of nothing but green balloons, carry outs and Polish violinists (March 29th 2005).
3. The club began in the Red Panda in Belfast when Jonny Blair conveniently sat beside Tim Beattie to consume some Chinese food and Asian beer and Tim nonchalantly said “let’s form a supporters club” after one sip of Tsingtao Beer. Four hours later Northern Ireland had baten England 1-0 (September 7th 2005).
4. The club began in Sharkeys in Bournemouth when Tim Beattie, Sammy Nutt and Jonny Blair watched Northern Ireland under 15s bate England 1-0 in a bar full of Englishmen and the official first meeting date and place was decided in the following weeks (October 2005).
5. The club began in Finn MaCoul’s pub in Westham Road, Weymouth at 11.17 am on Saturday 10th December 2005, when Owen Millar, Tim Beattie, Richard Ingram, Jonny Blair, Simon McCully and Alan Brown met and decided on a committee. This was followed by champagne on Weymouth beach to celebrate the birth of the SOE NISC!! (This is commonly known as the real day the club was formed) 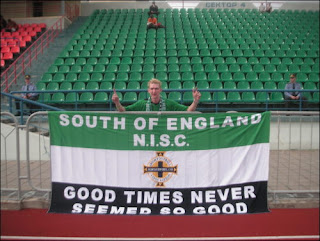 The main idea on why the club was formed was that Owen Millar, Tim Beattie and Jonny Blair felt that Northern Ireland fans living in the South of England needed their own club, as the London NISC and North of England NISC were too far to travel to, and in many ways far too sensible. The day the club was formed we decided that we should dress in green and white for every meeting whether its in a dingy rock club, by the beach, at a Torquay match or in a posh restaurant.
Since 2005, the club has grown from strength to strength, adding members all the time and spreading the word of the Northern Ireland football team far and wide. Either in official or unofficial capacitys, the club can now claim to have met up in: Weymouth, Torquay, Bristol, Bournemouth, Manchester, Southampton, London, Isle of Wight, Oxford, Gillingham, Weston Super Mare, Dartford, Basingstoke, Exeter, Bath and Colchester (all in England), but also in locations such as Bangor and Belfast (Northern Ireland), Copenhagen (Denmark), Berlin (Germany), Riga (Latvia), Reykjavik (Iceland), Vaduz (Liechtenstein), Zurich (Switzerland), Gran Canaria (Spain), Stockholm (Sweden), which often revolved around watching Northern Ireland matches. Ths club has had members at Northern Ireland matches throughout the years, including the 1982 World Cup in Spain, the Thailand match in 1997, the 1-0 win in Germany in 1983 and the 1-0 defeat in Portugal in 1997. The club also takes pride in supporting all Northern Ireland teams and squads, and as such have been to Belarus to watch the Northern Ireland ladies team and Belfast to watch the Northern Ireland under 21s team. There are almost 50 members signed up, but normally between 10 and 18 at every meeting, due to the wide geographical spread. We are constantly looking to expand and gain new members all the time.

We raise money for charities at nearly every meeting. In the past we have donated to the Earl Mountbatten Hospice on the Isle of Wight and The Cherries Nursing Home in Weymouth. We like to give money back to the local communities where we hold each meeting. To help promote the club. Original club secretary Owen Millar also helped raise money for the George Best foundation in 2005, with Tim Beattie and Tim Acheson also running marathons for charity and Jonny Blair raising money for Comic Relief with a naked FM radio show. 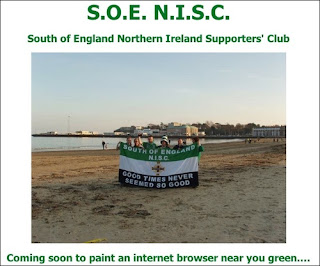 The club also has merchandise to help spread the word and add to club funds. These include pin badges, specially designed print outs for each meeting and polo shirts, with more merchandise planned.

The club also likes to meet famous Northern Irish people during their meetings. We have met Darren Patterson, Sammy Clingan, Jimmy Quinn, Maik Taylor and Damien Johnson at club meetings throughout the south of England, with more planned.

Our members are wide and varied and we have members living in places such as the Isle of Wight, Hong Kong, Bristol, Dartford, Weston Super Mare, Bournemouth and Southampton to name but a few. Most of our members are originally from and born in Northern Ireland from places such as Belfast, Bangor, Newtownards, Larne, Portadown and Londonderry. 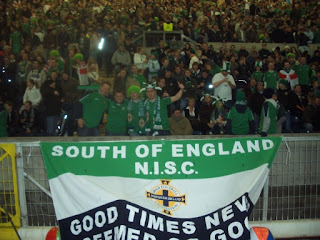 At every meeting we dress in green and white and turn a random English location green for the day. Members also bring 1 random item per person to each meeting. In the past this has included a Cardboard NI fan called Zulu, an inflatable crocodile, a guitar and a large variety of headgear, of which Owen Millar is by far and away the most creative member (at one point even ordering at hat from Texas, USA just to wear to a meeting). As mentioned our meetings are rotated round various locations in the South of England. Past ventures include Oxford, Bristol, Weston Super Mare and Gillingham (to support Northern Ireland ladies team). Future meetings are planned for Colchester, Brighton and Swindon. We are happy to meet anywhere and everywhere as long as we can attract a good turnout of members and discuss the relevant club issues. We specialise in spontaneous comedy like gate crashing hen parties and doing our own ‘gay discos.’
We were guests of honour at Weston Super Mare FC in April 2007, where we were allowed onto the pitch to sing and make a speech on their final home game. http://www.youtube.com/watch?v=2Ly8YHsr-xI and also welcomed by Alphington AFC in November 2007, where we took part in a half-time penalty shoot out. http://norniron.tv/index.php?option=com_seyret&Itemid=26&task=videodirectlink&id=516

Our meetings are exciting days out and we urge anyone to attend, but preferably football fans from Northern Ireland now residing in the south of England. Thank you for visiting. We are the South of England NISC! 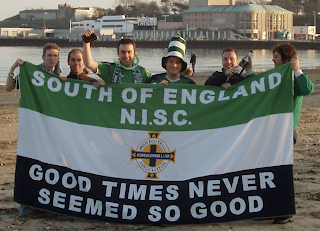 Chairman – Jonny Blair
Jonny is former editor of Northern Ireland football fanzine Here We Go…Again and has only missed 3 Northern Ireland home matches since 1990 and is ever present at SOE NISC meetings. Jonny often drinks lime Bacardi Breezer for breakfast.

Vice Secretary – Owen Millar
Owen met Jonny on a party train to the Poland away game in 2005 and this is where the seeds of the club were sewn…Owen often turns up to meetings wearing bizarre hats, of which the Stovepipe hat is an undoubtable classic.

Treasurer – Tim Beattie
Tim is the key man for your funds and your membership. Tim predicted on UTV Live that NI would beat Germany 4-0 away in 1996. This was Tim’s first away match and got him addicted to the drug of following NI.

Vice chairman – Graham Anderson
Graham sounds like Norman Whiteside 83% of the time. Graham has in the past got away with being “the sensible one.” Over time this is changing…

World Correspondent – Richboy
He is neither rich nor a boy, but we love him. He is the club chef, whose golden moment was decorating the club birthday cake in 2006.

President of Charity and Secretary – Scott Gordon
Scott Gordon pronounces his own name as Scatt. He is most certainly the club joker as well as being the lead singer of a three piece folk band.

Alex Higgins – Not only does Alex share his name with a snooker legend, but is isnt even Northern Irish! Jonny met him at George Best’s funeral in 2005 and asked him to become an honorary member. Alex bought a Northern Ireland top, brought his missus (who’s from Helen’s Bay) and fell in love with Northern Irish people and their spirit.

Shaun Schofield – Shaun has attended every Northern Ireland match since June 2005, is the author of There’s Always One and officially proclaimed us as “the craziest Northern Ireland Supporters Club in the world” during the Isle of Wight meeting in 2006.

Rebecca Corish (a Northern Ireland ladies international), though not a member has also proclaimed “you guys are headers” following a lunatic vocal performance by the South of England NISC in Gillingham, Kent during May 2007. 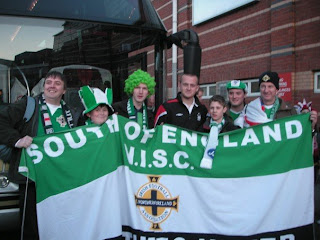 Our club mottos are : “Good times never seemed so good” and “More than just a piss up on the seaside”