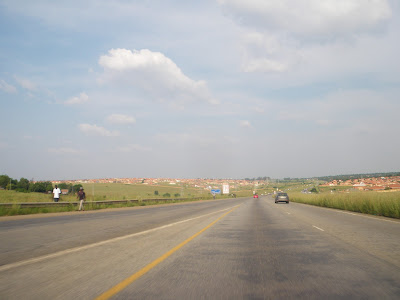 Having spent a few amazing days in Soweto and Johannesburg, I had made up my itinerary and rough plan for the rest of my time in southern Africa. In South Africa itself, I would make do with visiting just four cities (Durban, Soweto, Johannesburg and Pretoria) and I would cross into two of the other nearby countries to check them out – Botswana first, then Swaziland. In order to keep with my schedule, I decided to head for Pretoria and Gaborone first. 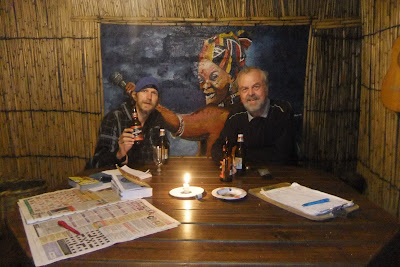 By coincidence, Herbert, an older German guy staying in Soweto Backpackers was heading to Pretoria too but in a rented car. He said it would be no problem if I joined him, so I did. I left my massive rucksack in Soweto Backpackers (an amazing place to stay) as I would return there before leaving Johannesburg and packed what I needed for the next few days in my small bag. 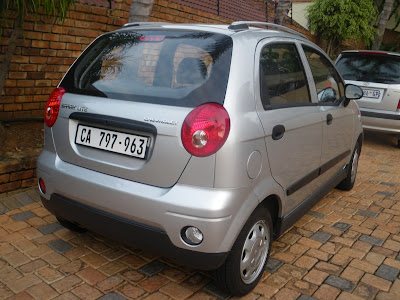 Herbert’s Hire Car was a pristine silver Chevrolet Spark Lite with four doors (or as some people say five doors). 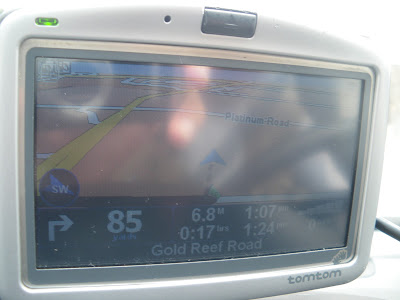 It came equipped with one of these crazy things! A road guide on a mini screen, known as a “tomtom”. I had experienced these before in 2007 in Tim Beattie’s car in Basingstoke (England) and in 2010 in Rebecca Yu’s car in Parramatta (Australia). I don’t like these portable road guides but Herbert seemed to be into it (and at times on the trip of course, I found a quicker and easier way on my map than Herbert did using this – we got lost manys a time believe you me). 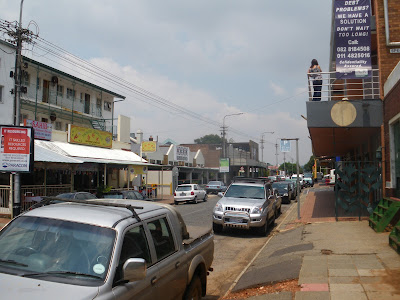 After leaving Soweto Backpackers we visited the excellent Apartheid Museum in Johannesburg including the Nelson Mandela exhibition (report to follow). Then we parked in the leafy suburb of Melville in West Johannesburg. A lunch stop. 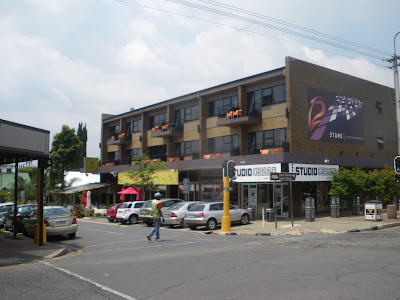 There was plenty to choose from. Melville was hip and trendy and at lunch time there really were a host of places we could have eaten. After a 30 minute walk around, we settled on Bambanani, which was recommended. 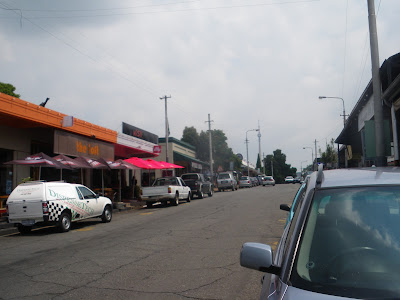 Street where we parked – 4th Avenue in Melville, Johannesburg. 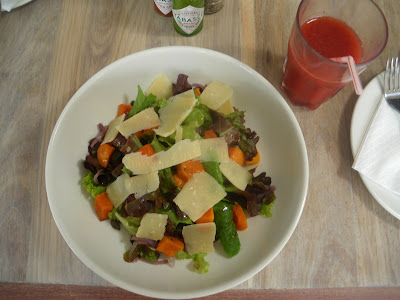 I oddly opted for a vegetarian light meal – butternut salad and a strawberry juice. My reasoning was probably because they were cheap. Herbert did splash out on one beer, but at double the price I was being wary as I had been unable to check my cash balances since I had left Brazil a week earlier. The meal was totally fantastic and in a very hot climate the strawberry juice was thirst quenching. The cost including the tip was 51 rand (about 5 pounds). 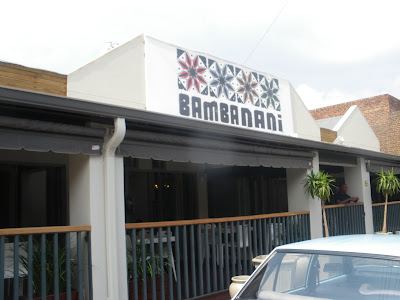 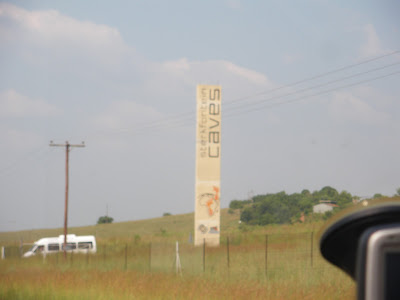 So on route to Pretoria from Melville in Johannesburg the plan was to visit the caves at Sterkfontein. We were both up for it and I had them marked in my guidebook as well as a map of how to get there. However Herbert, being slightly older, set in his ways, cautious and clumsy assumed we could leave Johannesburg around 2 pm and make it to Sterkfontein by 4 pm. I pretty much knew that wouldn’t be possible. He relied on this computerised guide (tomtom) rather than road signs and common sense. This made the trip absolutely nuts or “bananas!” I took a few videos but didn’t quite capture the crazy driving of Herbert. He went the wrong way down one way streets, then blamed it on the computerised guide. He also went the wrong way ONTO a busy dual carriageway and he also got lost a fair few times. Including one moment where we ended up in an all black shanty housing estate next to women’s knickers hanging in the street drying – one of the friendly locals there directed us kindly, back the way we’d came and out of the estate! Herbert was very adamant that he wouldn’t take my advice from my book or printed map. The irony being that in the end the map in my book was the one that guided us in the end to Sterkfontein Caves! 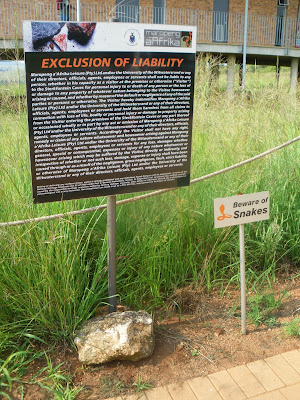 Beware of snakes indeed? Or not as the case may be, as typically due to Herbert going totally bananas we arrived at Sterkfontein just after the last tour had gone. The actual tourist entrance closed at 5pm but the last tour left to the caves around 4pm, so we were sadly out of luck. 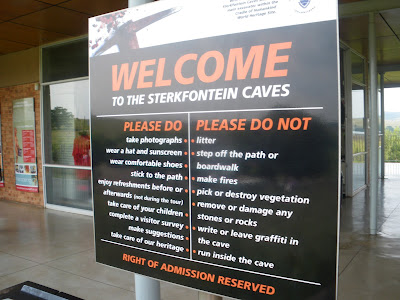 It was nice to find Sterkfontein Caves, but also sad that we hadn’t been able to do the tour. I satisfied myself that I had seen caves in Batu, Malaysia (and also would later see the Jenolan Caves in Australia). At least we had safely found it. 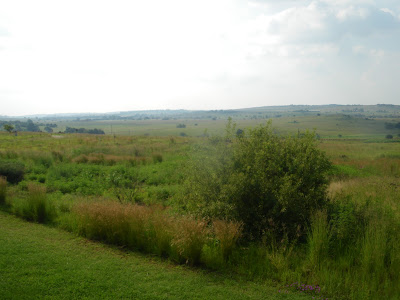 The countryside was remote and very green. I enjoyed it. 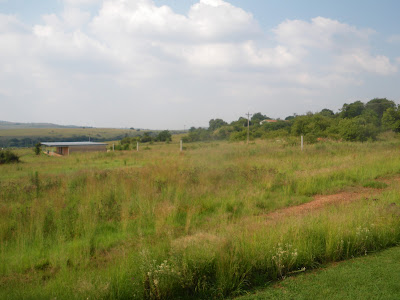 Sterkfontein Caves is down there somewhere. A world heritage site with fossils, caves and dinosaur ruins. It wasn’t quite the “Jurassic Park” that Alan Partridge had spoke of… 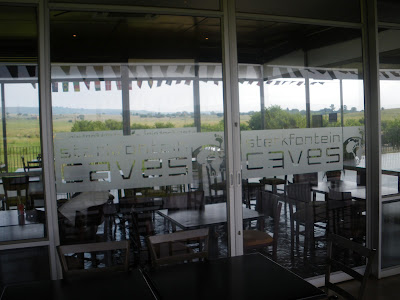 Even the restaurant was closed. Nice timing Herbert! 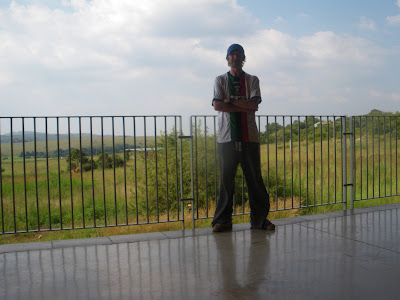 The nearest I got to Sterkfontein Caves. Nice wee photo with my Glentoran shirt on in the South African countryside.

Then it was onwards on the carriageway to Pretoria. We hit a bit of rush hour traffic and some tolls. 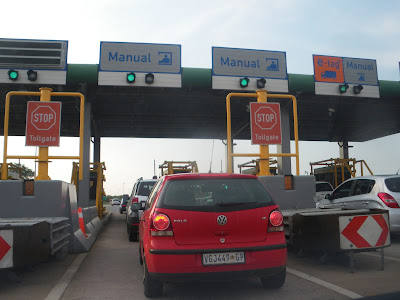 We had to pay a toll here. I paid for it since Herbert was driving. This was the only toll I remember. 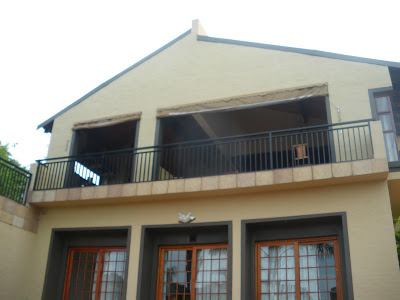 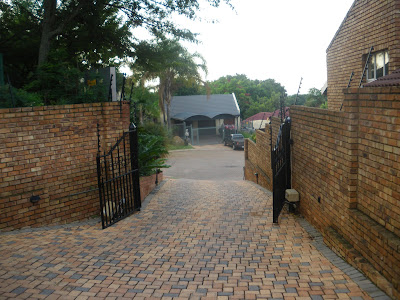 Then we arrived at Three Bees Guesthouse – where Herbert was staying. A nice posh pad which included a welcome beer and was housed in a private quiet street in Pretoria. 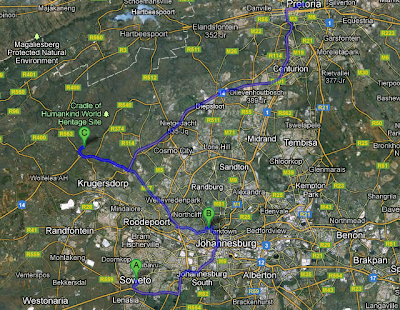 The rough route we took that day, not including getting lost. The Sterkfontein Caves that we missed are just a part of the Cradle of Humankind World Heritage Site. 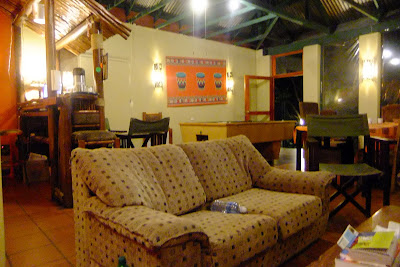 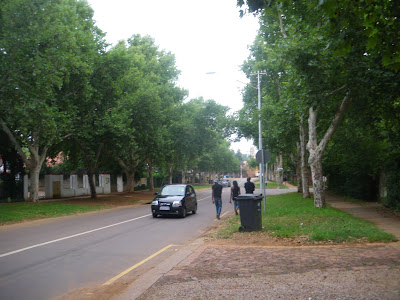 Herbert got checked in and then offered to drop me off at my considerably cheaper hostel – Pretoria Backpackers at 425 Farenden Street in Clydesdale. And that was the end of the road trip and I was safely in a nice dorm for the night (where I met Takeshi Suzuki – a Japanese guy who I met again just 2 months ago in Tokyo!). I offered to pay Herbert petrol money but he didn’t take it – probably embarrassed by his dodgy driving. Thanks for the trip up though Herbert – was interesting being in the car with you for the day!
From – Soweto, Gauteng
To – Pretoria, Gauteng
Via – The Apartheid Museum, Mellville, Sterkfontein
Distance Travelled – 152 kilometres
Transport Used – Herbert’s Hire Car
Nationalities Met (on the way) – South African
Nationalities Met in Pretoria – New Zealand, Japanese, Dutch, South African,Zimbabwean, Botswanese
Herbert’s Hostel – http://www.guesthousebbb.com/
Jonny’s Hostel – http://www.pretoriabackpackers.net/
Key Song –
RADIOHEAD – BANANA CO:
Key Film –
HERBIE (HERBERT) GOES BANANAS:
1 – German Trailer where Herbert must have took his inspiration from:
2 – Clip from the Film:
Key Quote From Herbert Asquith –
‘You can no more split Ireland into two parts than you can split England or Scotland into parts. Ireland is a nation; not two nations, but one nation. There are few cases in history, and, as a student of history in a humble way, I myself know of none, of a nationality at once so distinct, so persistent, and so assimilative as the Irish.’
(It’s clear then that German Herbert wasn’t the only crazy Herbert on the planet)
My Videos –
HAVING A JOHANNESBURG JOBURG BEER WITH THE LOCALS IN SOWETO:
APARTHEID MUSEUM IN JOHANNESBURG:
*******************************************************
PLEASE WATCH THIS NEXT VIDEO – HERBERT IS NUTS – HE USES THE CAR’S VIDEO DIRECTION MACHINE AND ENDS UP THE WRONG WAY ON A CARRIAGEWAY:
HERBERT’S CRAZY DRIVING PART ONE:
******************************************************
AND IN THIS VIDEO HERBERT GETS US LOST IN A RANDOM LOCAL VILLAGE!
HERBERT’S CRAZY DRIVING PART TWO:
AND DECENT DRIVING HERE FROM HERBERT ON ROUTE FROM STERKFONTEIN TO PRETORIA:
Join 15,017 Monthly Readers! If you enjoyed this article and LOVE travel and SAVING money, get e-mail updates from Don’t Stop Living – a lifestyle of travel! (It’s Free) 😉 Jonny