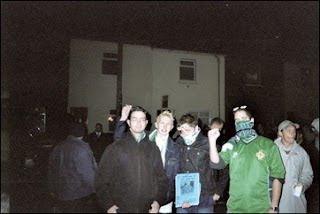 Having been a massive enthusiast about the Northern Ireland international football team since the 1986 World Cup, I had slowly worked my way to the point where I wanted to do something with my knowledge and passion. Initially this meant just turning up at Windsor Park to watch Northern Ireland matches. I used to go with my Dad and also Michael and Gavin McClelland and their Dad Brian. It was a drug since my first home match v. Yugoslavia in 1990. We lost that match 2-0 but I was in love with supporting my country actively. To this day, I’ve only missed 3 home matches since then. Not bad in the grand scheme of things, eh? 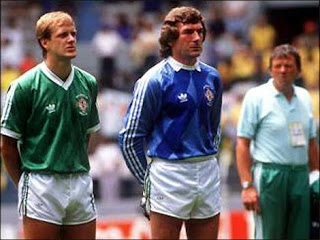 So in 1995 I designed a ‘Bangor NI’ fleg (flag) which I started to take to matches. I also had an inflatable hand which I used to take to the Railway Stand. I then started to write for the Northern Ireland football fanzine ‘Arconada…Armstrong!’ (named after the John Motson commentary on BBC1 from the night we famously bate Spain 1-0 in Valencia at the 1982 World Cup). I normally wrote under my real name of ‘Jonny Blair’ but also used ‘Ronny Rare’ and ‘Norman Ireland.’ Those days of being 15 were probably to blame. Then one day Michael, Gavin and I decided we should make our own fanzine, add a youthful and positive humour to a team which was totally not performing on the pitch (we had just recently lost 4-0 to the Republic of Ireland). By late 1996 all was go. we designed the fanzine, chose the name of ‘Here We Go…Again’ and launched it dressed in green Northern Ireland shirts and wondering why so many people would turn up to watch their country without wearing a green Northern Ireland shirt. It just makes sense! 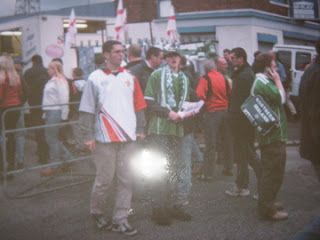 Our first issue of HWGA was in March 1997 for the 0-0 draw at Windsor Park with Portugal. Our zany dedication saw us produce a further 18 issues, the last of which was for the 0-3 home defeat by Poland in September 2004. In the 7 years when the fanzine was fully functional we had enjoyed (or not) 4 different managers, a scoring drought and victory over the Republic of Ireland in Dublin in May 1999. Sweet times indeed.

Sadly caught in the technology time trap there are very few photos available of us or the history of Here We Go…Again. Perhaps it’s better to leave it like that. I have all the back issues in the archive and a few photos survive from outside the Linfield shop. Any new Northern Ireland fans are totally unaware of this world where hardly anyone turned up in green and white and that even in 1999 for the Turkey match, many fans were still singing sectarian songs such as ‘The Billy Boys’ and ‘The Sash.’ Times have changed and it is a great time to be a Northern Ireland fan. We are now enjoying inspiration on the pitch as well as in the stands. 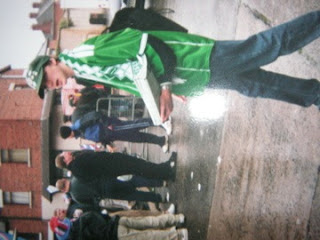 I guess myself, Michael McClelland and Gavin McClelland (along with other contributors such as Cunningham Peacock and John Bingham) can be justified and happy that our hard work and passion at the time of need has helped in some way towards bringing such a great atmosphere and mega support for Northern Ireland home and away. The people we used to meet while selling ‘Here We Go…Again’ included Richard Henry and Marty Lowry, who used to sell ‘There’s A Wee Spot In Europe’ which became ‘Our Wee Country.’ Although Marty also went to away matches, at the time as two young teenagers, Michael and I didn’t enjoy this privilege. Being there at Windsor Park was enough for me. In the time since however I have now clocked up 10 away matches as well as almost 100 home matches. Living in England now I am chairman of the South of England Northern Ireland Supporters Club (SOENISC) and I still travel back to Belfast for every match. I also contribute to Happy Days fanzine, the Our Wee Country messageboard (Marty and Richard’s forum) various websites and magazines. Some things never ever change.

We’ll Support You Evermore – around 3 issues

Bang On Your Neighbours Wall

HERE WE GO…AGAIN WILL RETURN…