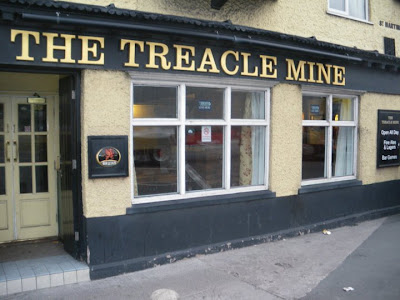 We parked near the centre of Hereford but in a slightly different area than before. We were looking for a poky old English pub with a pool table. And we found it in The Treacle Mine. 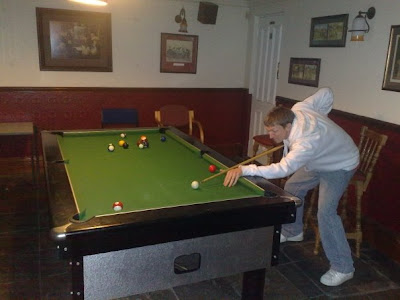 They had pool so a few games were in order. Ironically the following Tuesday night I’d be playing again in The Red Wolf Pub in downtown Tainan, a city that I never never heard of when we did Hereford. Funny old world. I beat Austin at pool, just for old time’s sake. I always used to beat him. 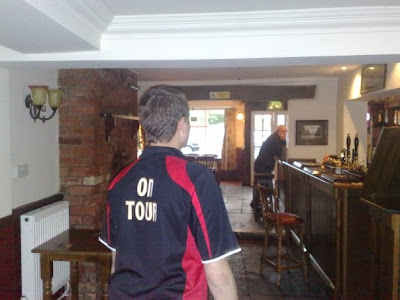 There was an old dude just standing at the bar, and Dan and I being the outgoing types that we are chatted away to him, perhaps even getting philosophical at one point. For Dan the journey would continue as a Cherry regular and he had many more random people in pubs to chat to. For me, we all knew it was the end somehow, though I chat to anyone and everyone I meet on my travels, not on route to a fourth division football match though. 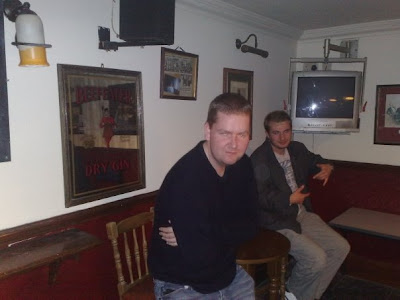 Austin was a wee bit drunk. That’ll be his excuse for losing at pool. He just wasn’t good enough. 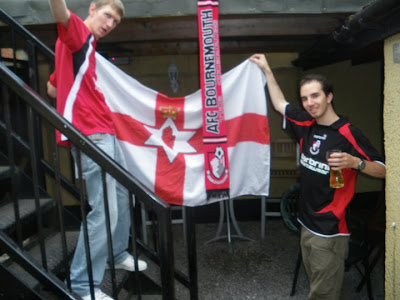 It wasn’t yet dark actually and Dan and I mingled on the balcony. This definitely was a poky we pub. Bournemouth scarves and my travelling flag were hoisted up. 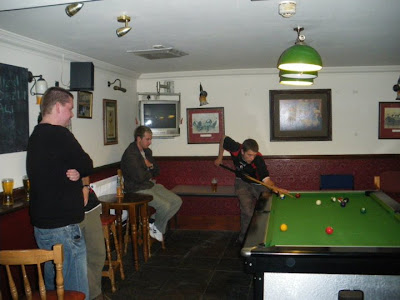 I have a feeling Tom won the pool that day, but nobody will ever remember… 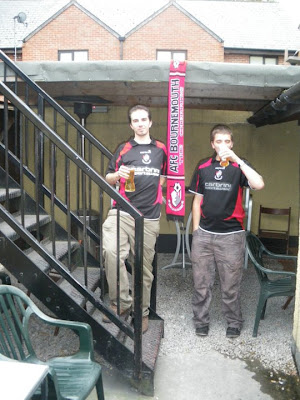 Tom and Dan in the “beer garden” with the steps that led up to the balcony, in the background you can spy a residential area, read on… 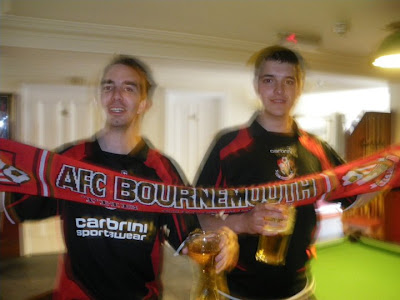 Dan and Tom fly the scarf in The Treacle Mine, and below is where I parked. A residential area we believe… 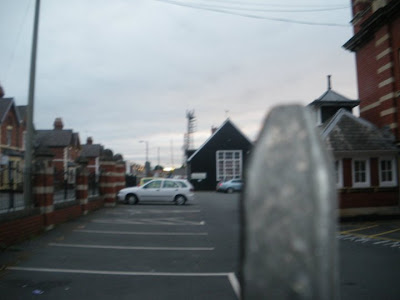 I cannot remember the full story of what happened, but basically I parked in a private residential area, but thought there were loads of spaces. Some woman hauled abuse at us as I was driving off. I think we hit her back with “we dont care love. Up the Cherries.” And then launched into a singsong of “Super Fletch”. Next stop was to park near Edgar Street, pose outside the stadium for some photos while it was still light, and grab that pre match pint and bite. 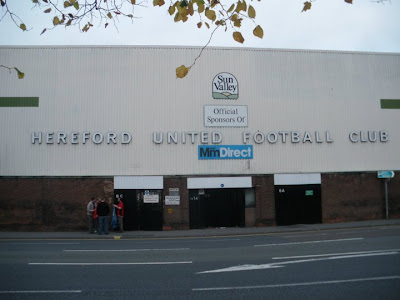 On a main road believe it or not, yet no cars at Edgar Street. 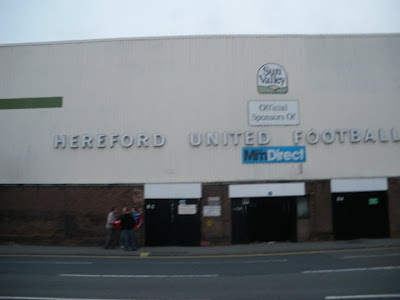 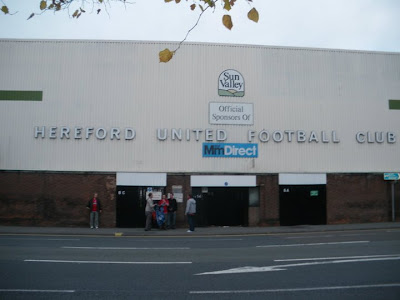 Another few of the lads at Edgar Street, home of Hereford United Football Club. 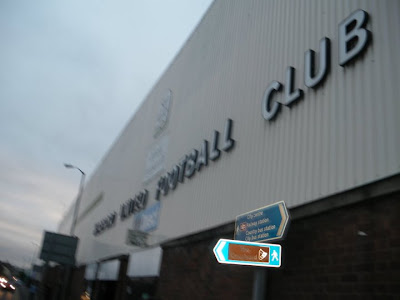 Side angle of the stand we would be in later. 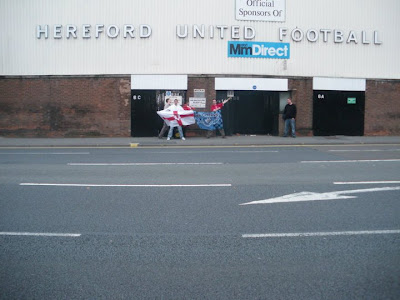 Close up including my Northern Ireland flag. 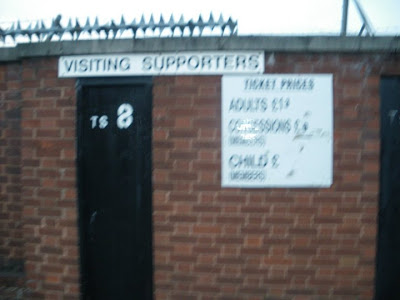 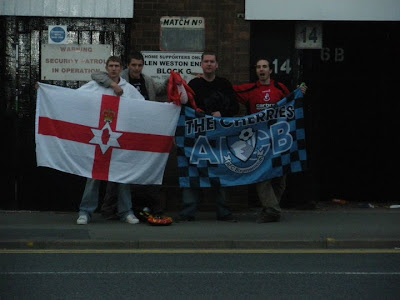 The final daylight shot of the day. Party mode, or sadness? Make your own mind up. My mind was a mix of things that day and I have little recollection of these small moments. Lucky they were captured by Rich from across the road. 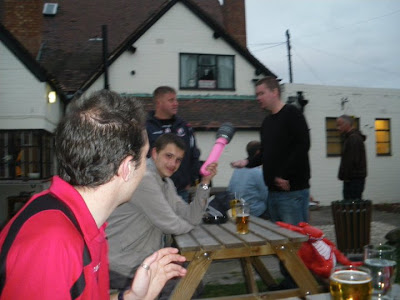 And to the pre match pub, The Oxford Arms (right by the car park) where we just sat around and chatted if I remember correctly. I may have read the match programme too. Pre match chat was normal banter with the lads, we looked at the league table, worked out other teams we wanted to lose that night, made our predictions and went on our way… 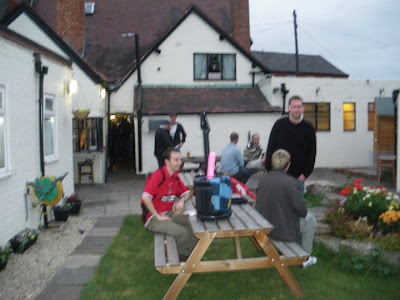 One last photo and that was it. It was off to the match. The main event and reason for the day out. The curtains were falling on my 6 year English life as Ulster Cherry.
From – The Treacle Mine Pub
To – The Oxford Arms Pub
Via – Edgar Street for a photo shoot
Miles Travelled – About 210 miles
Key Song –
BLUR – TO THE END:
PLAYING POOL IN THE TREACLE MINE, HEREFORD:
RANDOM HEREFORD FANS OUTCOME IN OXFORD ARMS PUB, HEREFORD:
Join 15,017 Monthly Readers! If you enjoyed this article and LOVE travel and SAVING money, get e-mail updates from Don’t Stop Living – a lifestyle of travel! (It’s Free) 😉 Jonny