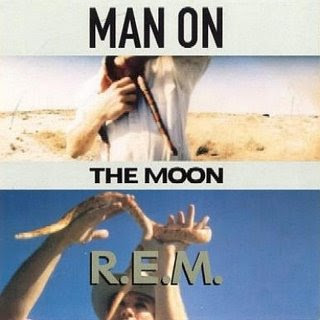 “Here’s a truck stop instead of St. Peter’s Yeah Yeah Yeah Yeah”, I have to admit that I don’t have a clue what that means. I am often confused by lyrics, and especially some of those REM lyrics from the early 90s. This particular lyric could easily have applied to my overnight stay at St. Peter’s Pass, a truck stop for lorries, juggernauts, cars and campervans. Instead it features as a lyric in the popular song, and one time UK top 20 single “Man On The Moon.” 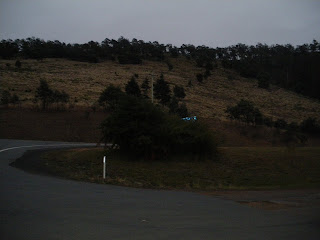 It was just last week I stayed there for one night relaxing in the southern Midlands of Tasmania. St. Peter’s Pass is a rest or stop off area somewhere between Hobart and Launceston. I didn’t plan to stay there, but ended up staying there for a night because I had an unexpected and unwanted extra day of work last week – cauliflowers weren’t ready and it was times like this that made me want to leave Tasmania. 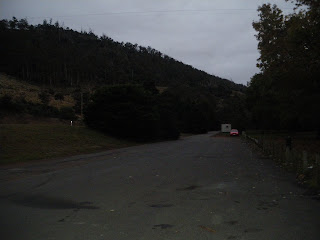 I’d rather be working 6 days a week at the moment, with just one day off for sightseeing. Having done most of the sightseeing, I just want to keep earning money here. Because cauliflower season hasn’t fully began yet, the growth is rather slow. It means I should either cut my losses in Tasmania by leaving early (in a few weeks time) or stay until the end of july (and guarantee lots of work for the whole season). 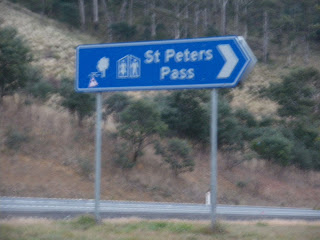 I pulled over at St. Peter’s Pass, made myself a cup of tea, had the last of my scones and sandwiches and relaxed. It got dark very quickly there. Maybe by 6 pm. There aren’t a lot of lights, lamposts or towns nearby. The moonlight is the only light we see. I’m not sure I believe they put a man on the moon you know. It’s a bit unrealistic isn’t it? 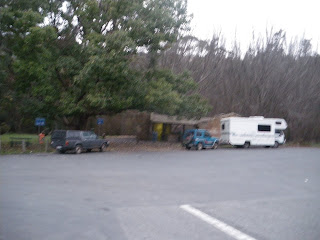 I slept very comfortably there enjoying a long sleep by the free public toilets and barbecue. Just after dawn, it was time to head back to Devonport, stopping off for some compulsory sightseeing on the way, including the joys of a historic village named “Ross.”
What Is It? – St. Peter’s Pass, a stop off picnic point
Where Is It? – Between Oatlands and Tunbridge on Tasmania’s Highway 1, the main road linking Hobart till Launceston
What’s there? – Public Toilets, Picnic Tables, Barbecue, Trees carved into the shape of animals, Forest Walks, Mountains
Where I Stayed – In the car park in my car
Key Song – REM – MOTM
“HERE’S A TRUCK STOP INSTEAD OF ST. PETER’S YEAH YEAH YEAH YEAH”, REM lyric from MAN ON THE MOON:
ME AT ST. PETER’S PASS, TASMANIA, DAWN:
Join 15,017 Monthly Readers! If you enjoyed this article and LOVE travel and SAVING money, get e-mail updates from Don’t Stop Living – a lifestyle of travel! (It’s Free) 😉 Jonny