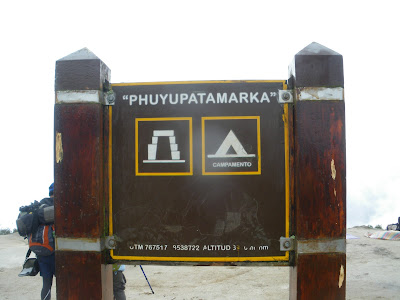 It was 3pm on the third day of the Inca Trail when we arrived at Phuyu Pata Marka, the highest stop point of today’s part of the Inca Trail (though we had been higher just 30 minutes earlier but without Inca Ruins to stop at). As far as I can recall, this was the longest time we spent at any Inca Ruins on the entire Inca Trail, apart from the obvious Machu Picchu itself. And why not? 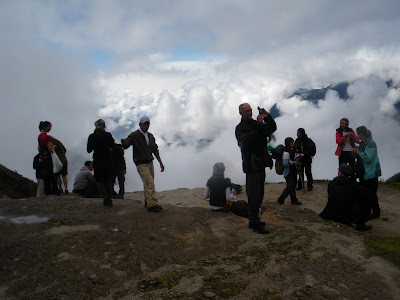 It was near the end of our third day, the sun was beginning to show through the mist and we all wanted a wee rest. 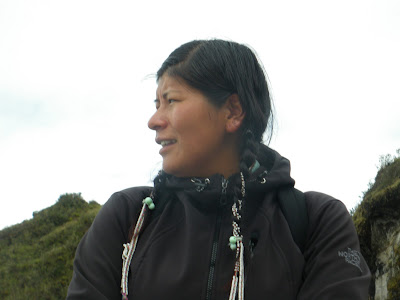 Plus Sonya gave us a nice speech there on the possible history and reasoning for the settlement of Phuyu Pata Marka. 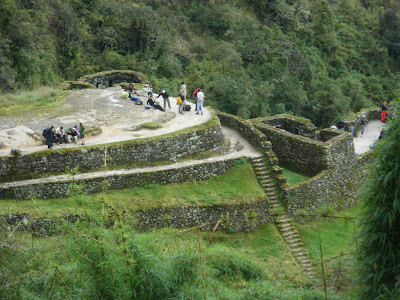 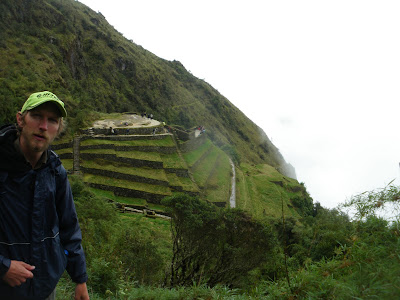 Arrival was down a long well made set of steps to a low ravine and then upward again straight away to the Inca Ruins, which were obviously built high up on a hill in order to create protection. Not just from attacks, but from the rain and abverse weather conditions. 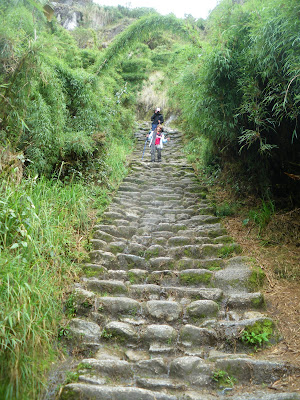 Those pretty steps down wards… 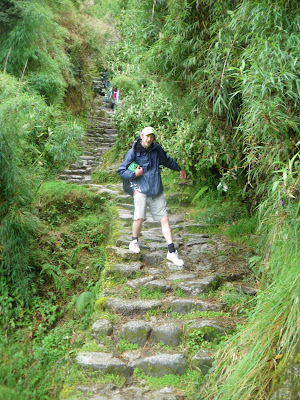 Almost at the bottom of the hill on which Phuyu Pata Marka sits. 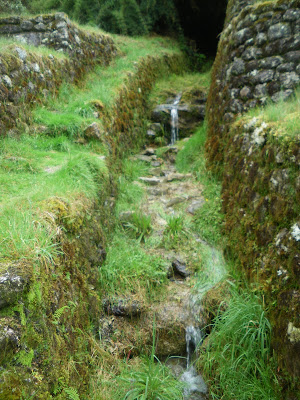 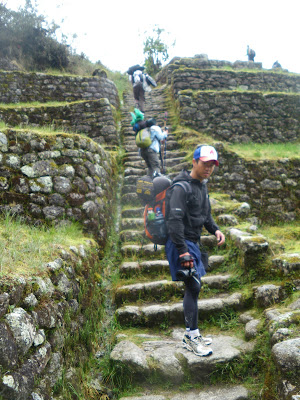 The ravine and the rising slope and steps up to Phuyu Pata Marka. I was with Dave and Cheryl most of the way on Day 3. 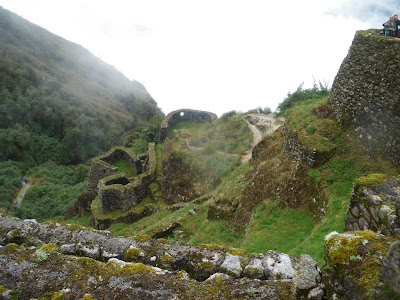 The view as we got to the top. 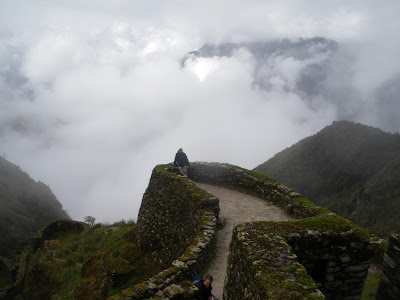 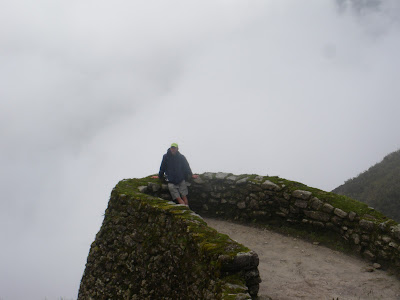 Standing alone on the best viewpoint at Phuyu Pata Marka. The mist cleared mysteriously while we listened to Sonja’s Inca speech up there. 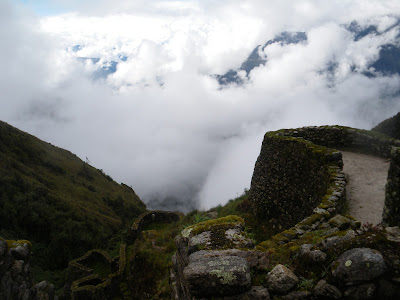 Mist beginning to clear on the left side (the path onwards) of the Inca Trail. 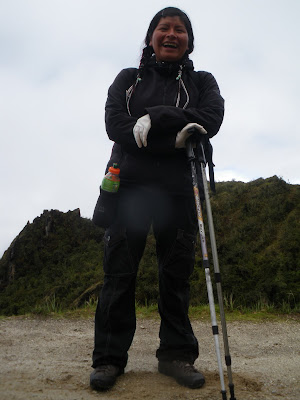 Sonja enjoying a happy moment at the top of Phuyu Pata Marka. 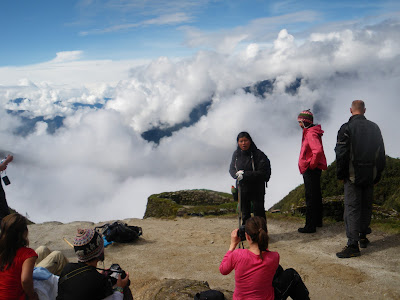 The mist clears, we relax, eat a few snacks and enjoy the freedom of being miles form civilisation at the peak of Phuyu Pata Marka. The weirdest thing was that the Inca Trail is only one path, yet while we stayed there for an hour, we didn’t see a single other group come along, and that morning when we left camp we had seen basically hundreds of other hikers. Either we were ahead or they were ahead. I still don’t know which… 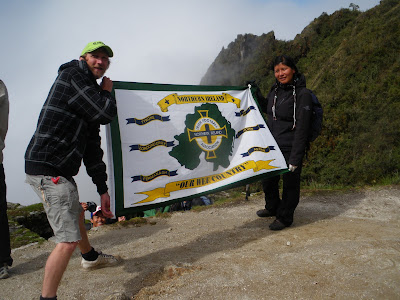 Sonja, Juan Carlos and Jose were the 3 Peruvian Guides on the 4 day trek. I must admit I enjoyed them all and tried to talk to them in Spanish mostly. However their English was excellent and when talking to me and even on the final night goodbyes to the porters they introduced me as the man from Irlanda del Norte. It felt nice that in such a poor country, people had a high level of respect and intelligence. They posed with my Northern Ireland flag and we enjoyed each other’s company. That’s Sonja and I at the top of Phuyu Pata Marka with my Northern Ireland Our Wee Country flag. 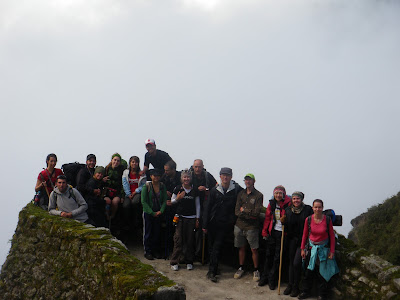 Since we were there for about an hour there was time for photos, chats and this nice group photo of us all. Not really tired or relieved, just eager to reach our base for the night, relax and prepare for the madness that would be Machu Picchu, the following day… 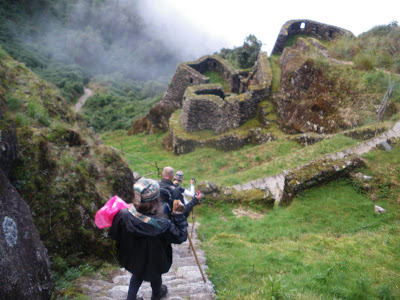 I glanced sentimentally at the Inca Ruins of Phuyu Pata Marka as we joined in the descent path down and down to a clearer area. A sadness occurred, knowing I would probably never be there again. Everything I had expected the Inca Trail up until now, it had been. It was almost predictable. But just an amazing journey. I felt blessed that I had been able to go on such an adventure as we lost sight of Phuyu Pata Marka it was time to move on…

ACE OF BASE – BEAUTIFUL LIFE: