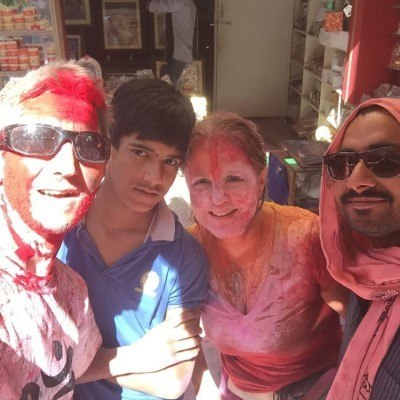 The plan to backpack through India was totally spontaneous but when I realised the dates matched up with the famous Holifest, I knew I would be there for this crazy festival. Festivals have nonchalantly become a part of my travels. In the past I have witnessed the crazy Bolas del Fuego in El Salvador, the 12th July parades in Northern Ireland, numerous festivals in Hong Kong and Australia Day in Parramatta. After returning to New Delhi from my time in Port Blair, Andaman Islands, it was time to try and head south in a hurry to the city of Vrindavan. 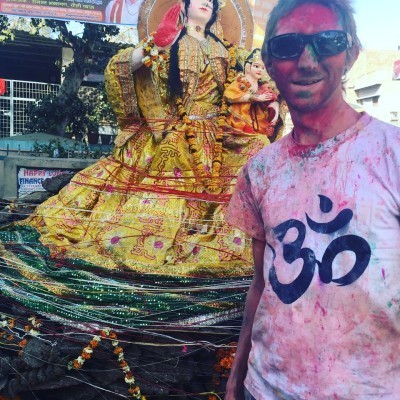 Quite simply Vrindavan is the number one place to experience Holifest and this was a pulsating experience for sure. I booked myself into the Nidhivan Sarovar Portico Hotel and got some new “throwaway clothes” so I could get paint powdered and enjoy the madness. 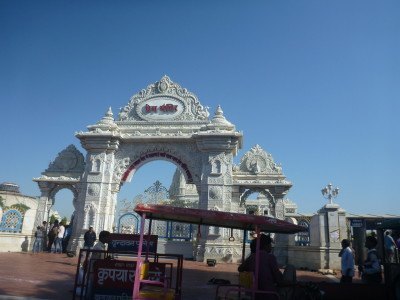 What is Holifest?
It is a religious festival held on Full Moon. It is commonly known as the festival of colours or the festival of sharing love. It’s supposed to be an equal gender festival, with men and women both involved and respected. However, we found it not to be like that at all. In many ways, Holifest is a disgrace with Indian guys showing themselves up as being the most sexist and least respectful guys in the world. It’s true – I saw it with my own eyes and so do many other tourists – it’s a shame. 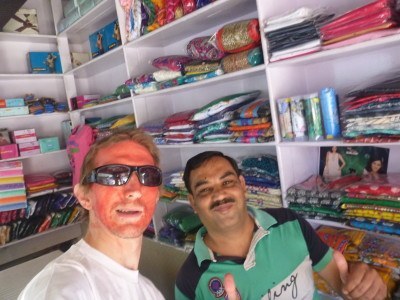 Ready for Holifest in Vrindavan

Where is the best place to experience Holifest?
Vrindavan is the number one place in India and the world to experience it. Many others also celebrate in Mathura, New Delhi and Jaipur. Vrindavan however is a sacred special place. It is the site where according to Hinduism, Lord Krishna spent his childhood days. Vrindavan is about 11 km away from Mathura (where we also experienced Holifest), Mathura is Krishna’s birthplace on the Agra-Delhi highway. 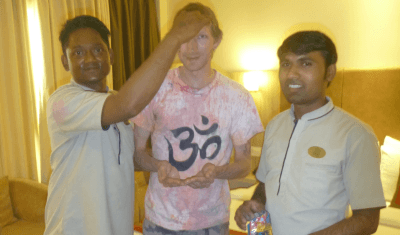 Vrindavan is a small town which hosts many temples dedicated to the worship of Radha and Krishna and is considered sacred by Vaishnavism. It’s manic here for Holifest – the entire place goes mental! I was there with my Brazilian backpacking buddy Katia and Terri and Joel who I met in Bishkek. You can read about my stay at the marvellous Nidhivan Sarovar Portico – best hotel in Vrindavan by a long way. 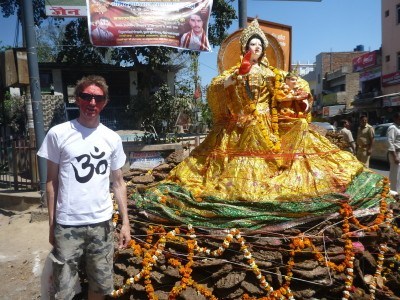 How to get to Vrindavan from New Delhi
Get a train to Mathura and then a bus, tuk tuk or taxi to Vrindavan. There is also a train station in Vrindavan. 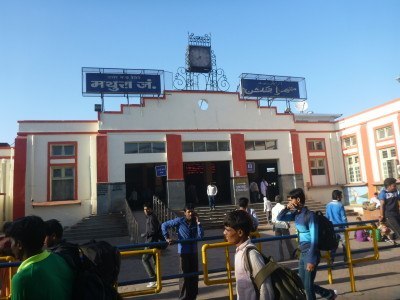 Preparations for Holifest in Vrindavan
You will get wet, paint bombed and end up with paint in your eyes, mouth, ears etc. so make some important preparations. Here are my tips: 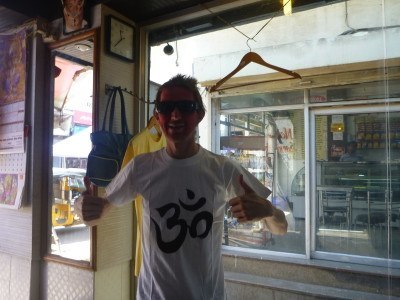 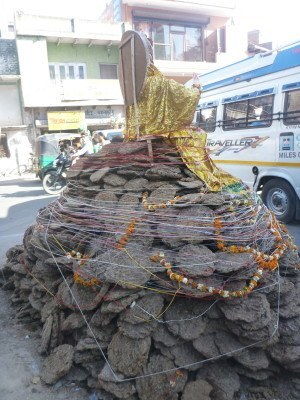 A bonfire made of bullshit 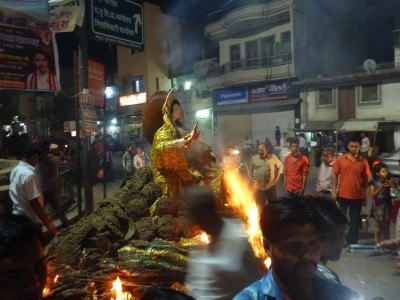 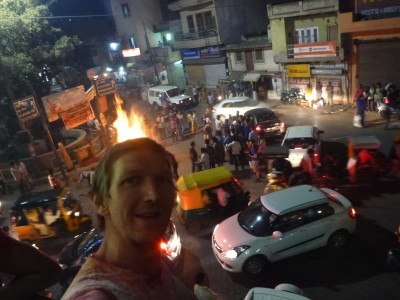 The Main Day of Holifest
This is where things get really crazy. To put it simply, Indians attack you with colours of paint, powder, water bombs, water guns and it all feels non-religious and a little bit over the top. I experienced the main day of Holifest in both Mathura and Vrindavan. I wasn’t able to use my camera as much – we got soaked and sprayed endlessly for a few hours so just a few photos of the madness. 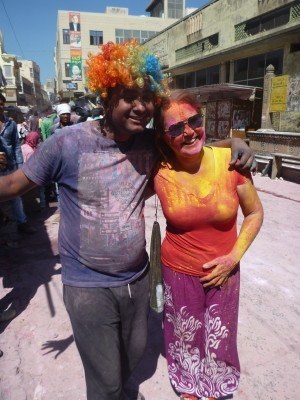 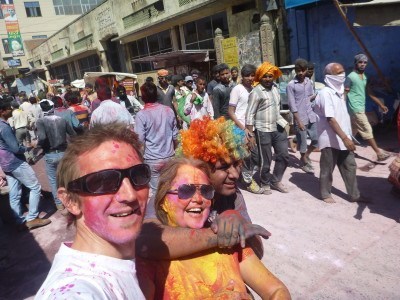 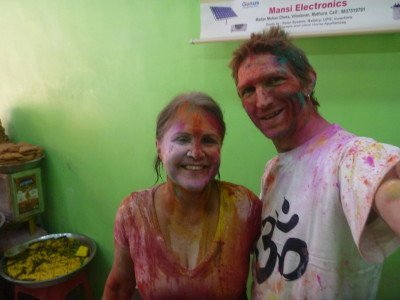 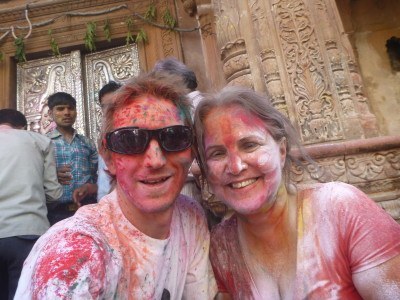 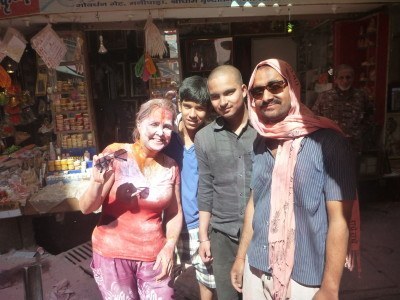 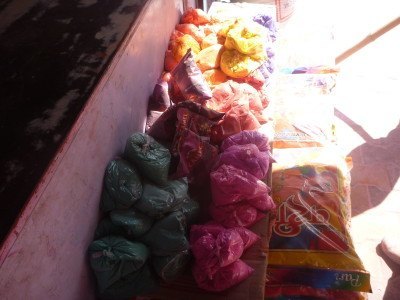 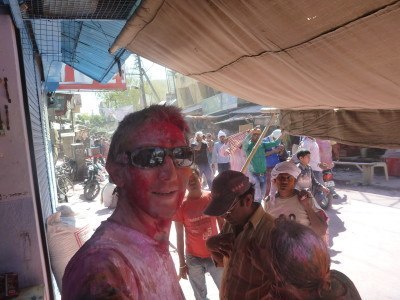 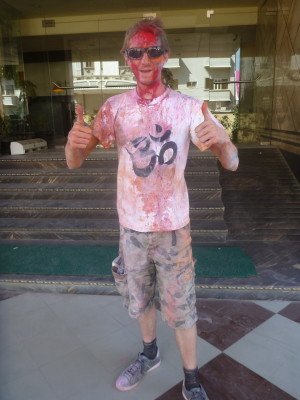 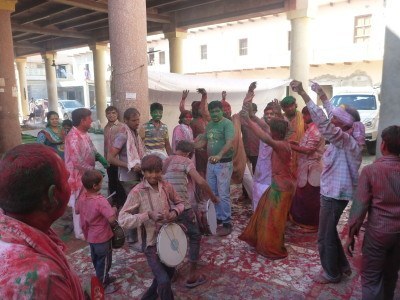 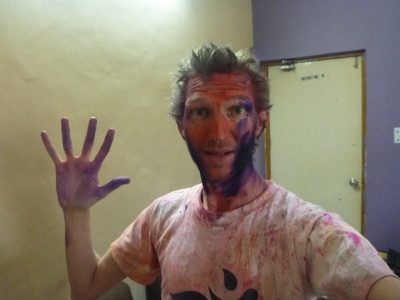 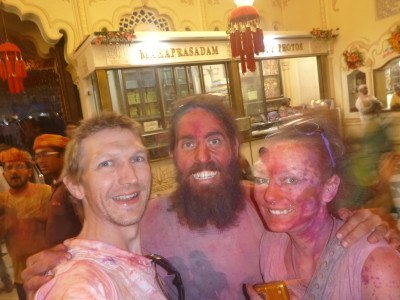 Alcohol at Holifest
Generally alcohol is not available or consumed at Holifest. Though sadly, a lot of the Indian guys you meet have taken alcohol and you won’t see them doing it, nor will they admit it. As a tourist, stay off the alcohol until the festival is over. There are a few shops that sell alcohol in Vrindavan and Mathura but there are no bars. None of the hotels have a bar and none are licensed to sell alcohol. This is a very religious and sacred area. Restaurants also tend to shut down and have short opening hours. We still managed to grab some decent food though. 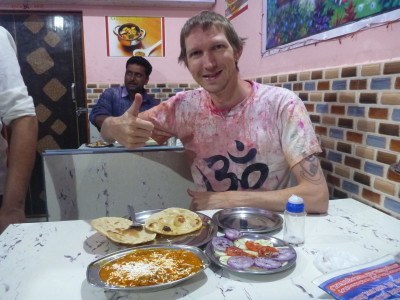 Be Careful: Girls at Holifest
Sadly the truth is, that all girls who attend Holifest will be subjected to physical abuse from guys, ONLY Indian guys I must stress. The foreign guys I met are all there to look after the girls.

Look after the girls

Indians will deliberately put paint and powder, water and piss into your eyes and mouths so they can get away with groping girls. They squeeze breasts and bums, they try to put their hands up vaginas and they generally disgrace themselves. And I have to add here – it is NOT a minority of Indian guys, it is lots of them.

Every single girl I met over the three days in Mathura and Vrindavan was touched and physically assaulted. EVERY girl I met.

I was travelling with Katia from Brazil and we met girls from Malaysia, Poland, France, England and Germany. They had all been abused. My friends Terri and Joel were also there and Terri was felt up by Indian guys numerous times.

My advice to girls would be:

As we chatted after Holifest on arrival in Agra, a few of us came up with an idea to get every foreign girl some kind of electrifying bra and knicker set, so that any guy who touched them would get an electric shock and would think twice or thrice before doing it again.

As you can imagine, I didn’t take my camera out much and certainly didn’t make any videos in the heart of the action as my camera would have been destroyed. Even inside a plastic bag. But here are some videos from my time in Mathura and Vrindavan.