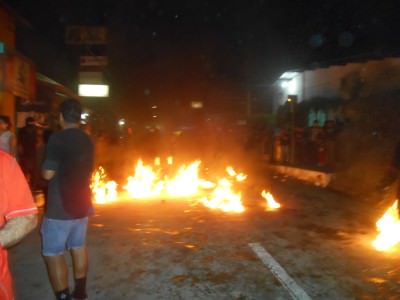 OK so over the last lot of years backpacking the globe, I’ve got involved in some pretty crazy things, not just my crazy stories posts but that time I fed hyenas mouth to mouth in Ethiopia, the time I swam naked in Antarctica, sky dived in New Zealand, hitch hiked in Iraq, danced with Swazi girls and watched a military parade in North Korea. I even wrote about 5 pretty SCARY places I’ve been. And then…I ended up in El Salvador.

“There’s a bullet in the gun. there’s a fire in your heart” – Planet Perfecto 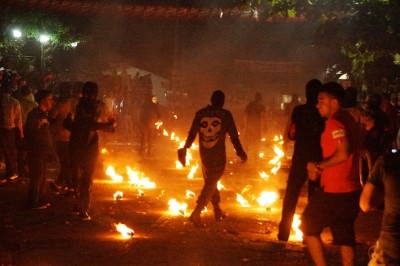 This country will test your backpacking potential, pump your smiles to a maximum and provide you with endless memories. You’ll tell everyone you’re coming to El Salvador for a few days, and like me, you’ll end up staying a bit longer as you’ll love it so much. Tales of touring Tazumal, seeing how indigo dyeing works, visiting Casa Blanca, surfing at Barra de Santiago and staying in Capricho and Ximenas as well as trying Salvadorian cuisine. However, on a dark Sunday night, on the 31st August 2014, I headed out to the barely known town of Nejapa in El Salvador. This was simply a CRAZY night. 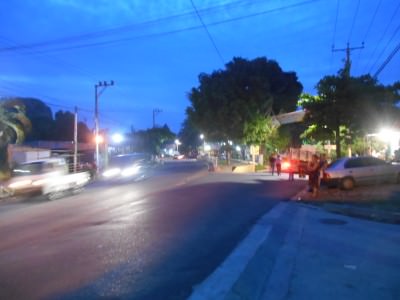 Here in Nejapa, a seemingly “normal” town in El Salvador becomes one crazy insane town just for a night. I headed to Nejapa for the Fireball Festival, known in Spanish as Bolas de Fuego and it was just insane, intense and unbelievable!! Photos, videos and words may never do justice to this festival, but I’ll try… 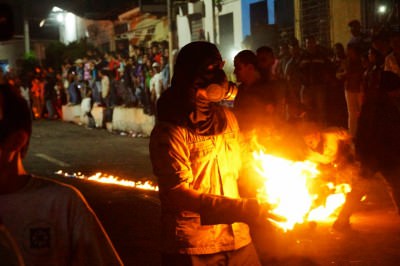 The best option by far and the one I recommend is to go to Nejapa with Ofintour – they are an ice cool tour company based in El Tunco in El Salvador. The driver Marbel ran a minibus to the event especially for tourists – despite not being too touristy a country, our minibus was almost full for this crazy event!! The crazy ness started from the beginning. 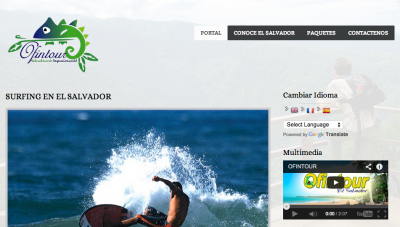 I was staying in Ximena’s Guesthouse in San Salvador and at 5.30 pm got a knock on my room door to say my driver was here. Marbel had driven the minibus from El Tunco, and already I had some new fiery (pun intended) travel buddies to meet and greet on board. I was on a bit of a hangover I must admit as had a crazy night out the night before (a Saturday night partying in the capital city with Ivan and Jorge my 2 new local buddies) but once in the bus, all ideas I had of sleeping or relaxing all the way to Nejapa were destroyed by my new crazy fireball buddies for the night. 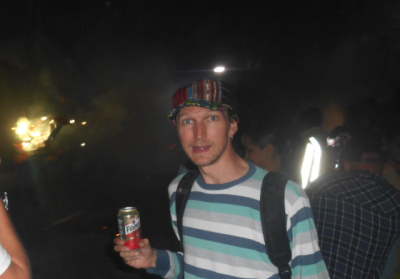 Another beer at the fireball festival!

Singing alone to pumping music, chatting of surfing and suddenly we were all chatting away. A diverse bunch with more nationalities than the semi finals of a World Cup. Well let’s count them to check:

“Everything must burn, baby burn” – Ash

Yes – we had a team and the boys were asking “where’s the tequila”. 37 and a half minutes later we pull up at dusk in the town of Nejapa. Now my travel tales and jaunts have taken me to many parts of this ever changing world, but Nejapa pumped out a beat of insanity from the offset. 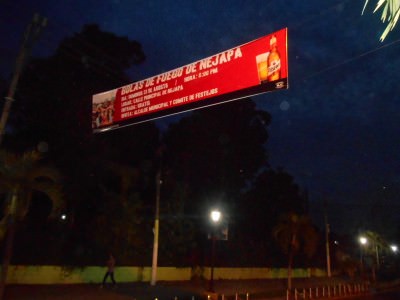 Arrival in Nejapa – festival on apparently!!

Fireworks on entrance to the town, the local lad telling us we had to move the minibus, hundreds of people piled onto the streets for a festival. The place had a buzz and you could feel it, you feel it in the air. Wo Oh, it’s a passion. 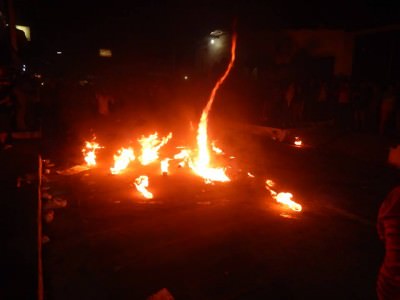 Fireball tornado – you could feel the magic in the air. **

The evening wasn’t only about fire though, there were more surprises up Nejapa’s hot hot sleeve and here’s how the evening unfolded in order…and disorder.

Walking down the street and we are asked to try a crazy hot milky shot. It’s a local mix that they add alcohol to. It’s hot, tasty and costs $1 US. As budget backpackers, we all jump in and take a cup each. It was more than a shot by the way – it’s a full cup and tasty as hell. A decent prelude to the event we’re about to witness. 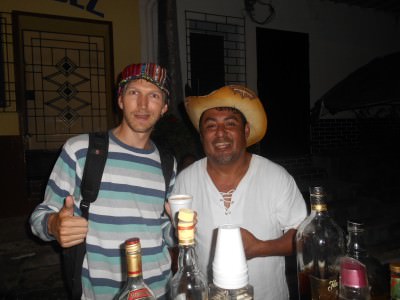 With the dude who prepares these crazy shots in Nejapa, El Salvador 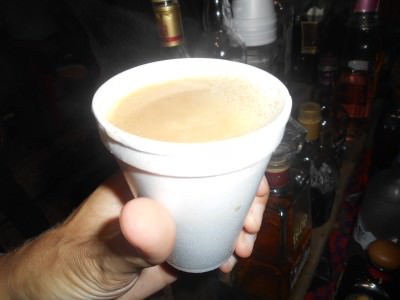 “Give it everything tonight, for all we know, we might not get tomorrow” – Pitbull 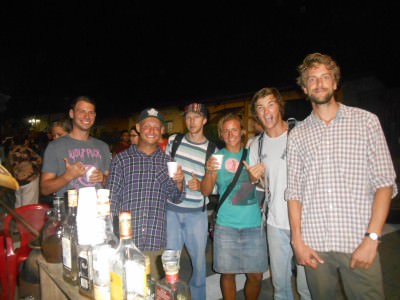 All together with our shots! 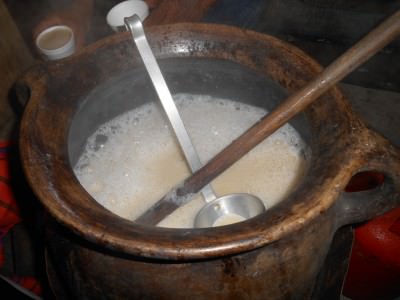 Hot milky alcohol mix for $1 US to get us in the mood for the Fire Ball Festival in Nejapa, El Salvador.

Party pumped Karol from Canada goes nuts at the idea that we can hold balls of fire, so we do. Karol, Alex and I we all don some gloves and pick up some balls. Holding them in the heat against a mural that represents “92 years since the eruption”. Yes, a volcano erupted here and hence why it’s a festival of fire, known as Bolas de Fuego. As our hands burn and we enjoy our sacred moments of silliness, we get our photos taken, put our balls back down and carry on regardless. Did we just get our hands scolded by balls of fire. Yes. It was all a bit devilish and macabre. 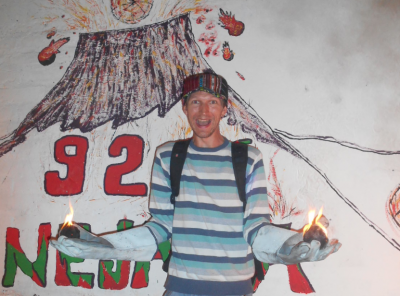 After walking down the main street (there seems to be one main street in Nejapa) we veer right to the “best pupuseria in town”. As we all order our pupuseria, the call for alcohol returns and it’s Cerveza time. 90 cents a bottle and the boys and girls are in. Clinging to our ice cold beers like it’s the last cold thing we’ll see all night. It was, fire was in the air.

“I fell into a burning ring of fire” – Johnny Cash 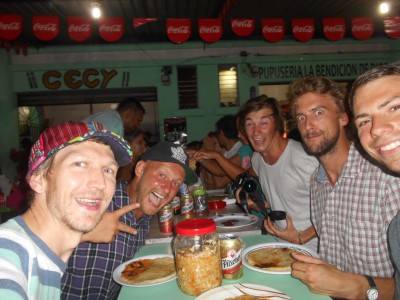 A speciality here in Nejapa is big pupusas. If you don’t know, pupusa is cornmeal dough stuffed with cheese and other stuff. We all opt for cheese and chicharron. The pupusas go down a treat. We eat them by hand with acidic coleslaw and spicy salsa on top. Each pupusa – $1 US. A second round of beer ensues and Marbel announces, “the festival kicks off soon”. Flaming hell. 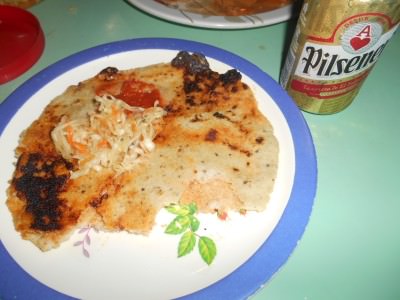 “I’m the man with the Flaming Pie” – Paul McCartney

We head back out onto the main strip. Even more crowds have gathered in some kind of mayhemic atmosphere that even the riots of Belfast never experienced. Fever pitch has arrived and a dude holding some kind of fire basket wanders aimlessly up and down the street. These guys are the preview for the big event. Fireworks blast off everywhere, a few people see their trousers go on fire and the crowd gets busy and lively. While all this is happening beer and water vendors walk past selling both products ice cold for $1 US. I should also point out, they walk past fire as if nothing is going on.

“I predict a riot” – Kaiser Chiefs 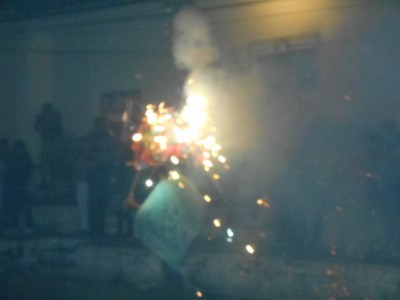 The preview features some crazy guys with fireworks and sparklers on their heads!!

Yes, it’s a fireball fight. It’s insane. You might not quite believe it. Two teams on opposite ends of the street throw live fire balls at each other. There is no health and safety here whatsoever and the balls drift into the crowd every now and then. I kick one away a few times, another one lands on my camera just as the fight is coming to a close. There are some crazy alcohol fuelled guys who are involved and are NOT wearing gloves. They pick up and kick the fireballs with their bare hands. The fight lasts well over an hour and anyone can get involved. I have uploaded all my videos below for you to try and understand how crazy it is. Thanks to my travel buddies Alex Evans and Karol g for these quality photos…it was just INSANE. 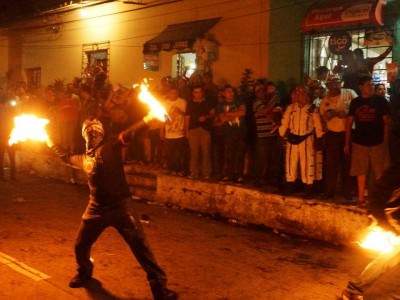 Basically people dressed up in scary costumes, mostly black and reminiscent of Halloween nights fight it out with the other team by hurling fireballs at them. We were literally right in the middle of it – between the two sides. At the flashpoint. It’s an organised riot in essence. 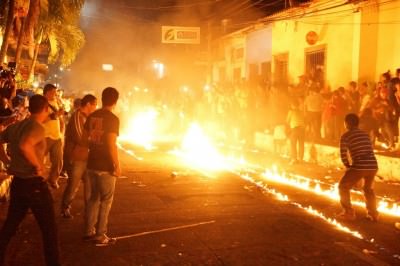 Fire on the streets of Nejapa **

Though admittedly it’s not too safe!! There are only a few police, fire brigade and paramedics on the scene ready for any mishaps. Which thankfully, as far as we could tell, there weren’t many.

“I’m your venus, I’m your fire, at your desire” – Shocking Blue 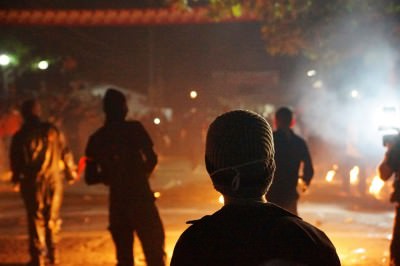 Some of the guys involved in the fire ball fight. **

While this is a cool event to have gone to, I was so happy to meet such cool travel mates for the night, so I thought I’d let them have a sentence each on how crazy it was. 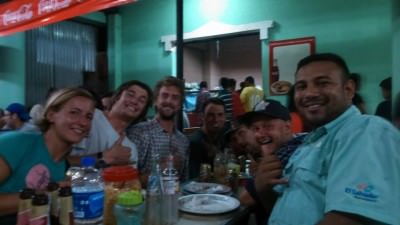 Over to my travel buddies on the mayhem that was the Bolas de Fuego in Nejapa:

Karol: “I never thought playing dodgeball with fireballs would be soo much fun! Craziest thing I’ve ever done in my life!”

Harry: “A celebrated legal riot. Only thing missing was the politics. Too much fun!”

Alex: “It was thrilling having so many hot balls coming at my head” 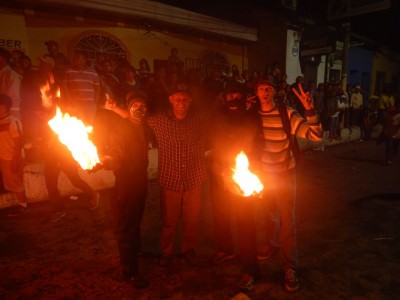 Holding fireballs with Karol and the rioters!! **

Thanks to Alex and Karol for providing some of the best photos on this post (Alex is a great photographer) and thanks to Ofintour for making it such an enjoyable and crazy night. 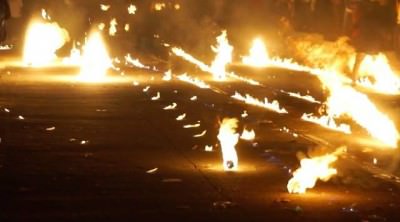 Lines of fire on the streets of Nejapa – just insane!! **

After the firefight was over, we all grabbed a large cerveza (Pilsener for $1.50) and headed back to San Salvador in the minibus. As 80s songs from Bon Jovi pumped out of the minibus stereo we all toasted to what was simply an epic, insane and unforgettable experience. Get yourself to El Salvador and get there for the 31st August and head to Nejapa. Trust me – you will buzz off it. In the end, Karol and I had another crazy night and day of touring the Copan Ruinas just a few days later in Honduras just to top things off! 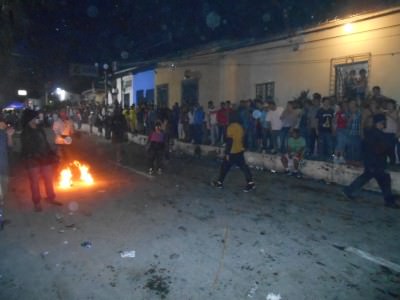 Fire on the streets of Nejapa. This is NOT Belfast, Northern Ireland.

In the meantime, safe travels, here are my top 5 fire songs and all my videos from this night of heated insanity:

4. Bullet in the Gun