OK so this week I should have been in Kerala, India having won a trip there, however the timings didn’t suit, so I thought I’d post about Kerala anyway in the hope I get to do the trip some other time. I’m sure I will – it’s on my list. 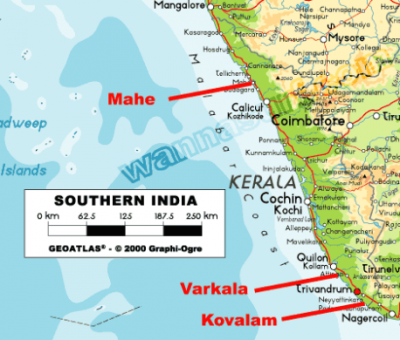 Popularity is always acquired. Be it the case of men or places. Places become popular all over the world either for their beauty, peculiarities or historical prominence. Beaches have always found place in the tourist maps of the world for their beauty and clear waters. Kerala in India is known for many such beaches, which are visited by hundreds of travellers each year. The clean sand and clear waters are said to be the main attraction of beaches in Kerala. But there is a beach in Kerala which rose to fame and attention because of its prominence in the history of Kerala. The Kappad beach.

In the district of Kozhikode, is the Kappad beach which served as a corner stone in Kerala’s foreign trade relations. It was at Kappad that the Portuguese explorer and traveller Vasco da Gama landed in 1498. Gama’s expedition gave Europeans an opening to the sea route that led them to the wealth of the Malabar Coast. This also paved for the European colonisation of India, which lasted for almost 450 years. The Zamaorins were the rulers of Kozhikode, when Gama landed here. These rulers supported Gama in his purpose to enter into trade deals. Malabar was then famous for the spices and also textiles. Gama’s export ventured into the neighbouring district of Wayanad too, where black pepper and tea were available in plenty.

Kappad is also known as Kappakkadavu among the local population. The rock-studded beach here, is a major tourist attraction with scores of tourists visiting each year. A stone structure erected here, declares that it was there that Vasco da Gama landed in the year 1948. This historical importance attached to the place is game enough to attract tourists and history enthusiasts in large numbers to the place. Domestic and international tourists visit the place in large numbers throughout the year. The beach which is mostly deserted during the day time, gets a large crowd during the evenings. The beach is also a major hang out for the city folk, who come here during the evenings to enjoy the waves, the breeze and the sun set.

Though the beach was affected by the Tsunami in 2004, the beach and its surroundings were renovated soon after. Permanent seats were erected around the beach. Trees were planted to provide necessary shade and seats are also provided around it, from where a good view of the sea can be enjoyed. A walkway near the beach also provides the necessary comfort to the visitors to enjoy and walk around the beach. Make shift joints serving tea and light refreshments are found near the beach serving the visitors hot and fresh eatables. The beach is thronged with families during the evenings.

The rocks that protrude into the sea at the northern end of the beach also attract the tourists. Waves splattering against the rocks present a sight to behold and cherish forever. The beach also has a temple nearby. The Kurumba temple, also called the Orupottum Kavu is an important place of worship for the local fishermen community. An early morning visit to the beach will unveil before your eyes the life and work of the fishermen community residing close to the beach. Fishing boats and nets are a common sight at the beach.

The Kerala Tourism development Corporation owns a resort at the southern end of the beach giving the travellers an opportunity to stay very close to the beach in all luxuries. Private hotels and resorts are also found near the beach making good accommodation an food available to the visitors. Getting to the beach is easy. The beach is well connected to the city of Kozhikode and taking a bus or an auto rickshaw will get you to this beach, known for its historical presence and also beauty. This article is authored by Syamnath JG who is one of the authors of the blog Ayurveda.