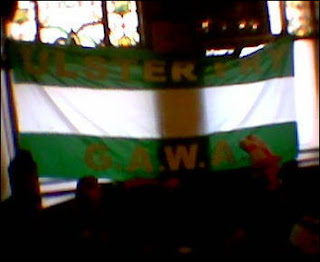 I will mention Manchester in other posts, notably the England v. Northern Ireland match of 2005, but in 2006 I travelled up to Manchester to represent the South of England Northern Ireland Supporters Club in the annual five a sides tournament for mainland NISCs. This was the first one, and was organised by the North of England NISC, who I was familiar with from Northern Ireland home and away matches. I knew Nial Coulter (Nolers) and Garreth Todd (Toddy) and was quite familiar with most of the other members of their supporters club. It was to be held the last Saturday in July at The JJB Soccerdrome on the edge of Manchester. I booked a megabus up for it and took my mate John Johnson. At the previous SoE NISC meeting it had become obvious that there weren’t many of us keen to play for some reason. Tim, Scott, Sammy G, Richboy and Graham had all declined the chance and that left myself, Owen Millar, Squid Armstrong (who knew my uncle, BUT I hadn’t yet met), Alex IOW Army and one other (who would end up being Fraser (Owen’s mate). That made our team of 5. I was working in London at the time and John stayed at my place in Shepherd’s Bush on the Friday night where we chilled out with a few beers. The megabus was due to leave at something like 8 am, with the five a sides due to kick off at 12 noon and last for two hours. It would be in group format with the following teams:
– North of England NISC
– Scottish NISC
– London NISC
– South of England NISC
– North of England NISC Team 2
– Continuity North of England NISC 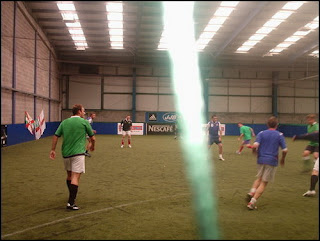 John and I made it to Victoria Coach station easily on time, but the megabus was delayed, and left an hour or so late. The traffic to Manchester was also very heavy, and it became obvious that we wouldn’t make Manchester by 12 noon, never mind the actual tournament. I was already dressed in football gear, although with a green wig. John and I had a few beers and tried to liven up boring passengers on the megabus. They weren’t amused and continued to be boring. Once out at Manchester (having left voicemails and apologies to all those who expected us to be there at 12 noon), it became obvious that we wouldn’t get to the Soccerdrome by 2pm!!! Thus missing the entire tournament and the reason for the trip. However rather than wait for a bus, John and I decided just to share a taxi and not worry about the cost. I made it for 1.30 pm, where most of the South of England NISC matches had already been played!!! On talking to Owen Millar, we had done alright and they looked a bit tired so I agreed to stay outfield for the entire last match as I had fresh legs and should play better in theory. This despite not playing a football match for about a year, and not playing a refereed match for about 7 years. I came on wearing my AFC Bournemouth shirt (our team were in red), where I first met Squid, a hard nut in the centre of midfield/defence (as five a side makes you play). I still can’t remember if I played in two matches or one, it all went so fast and we’d had a long bus journey, a few beers and not much sleep. What I do remember is scoring two goals in our 5-0 win over the Continuity NoE NISC. I also hit the post and was denied a hat-trick. Owen had filled me in on all the scores, and we had done really well since none of the team had played together so far. In the end we were leading 2-0 against both the North of England and Scottish NISCs, but ended up losing 3-2 and drawing 2-2. Still it was great craic. I’m just gutted that the megabus was late and I missed the first 3 matches, the chance to put our club fleg up with the others and a team SoE NISC photo (which we never did). I headed straight to the bar in the JJB Soccerdrome for my post match pint! 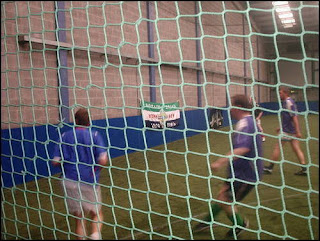 Squid then revealed he had booked a hostel for the night, so me and John went in and booked it as well. Squid was driving so gave us a lift. This meeting was also the first South of England NISC meeting outside the South of England! So it was pleasing to get a turnout of six (including Beverley in that and excluding Fraser, who wasn’t a member, but kindly played for us) Once in town it was on the street that I bumped into the green shoe-d Shaun Schofield. Shaun is mentioned an many and various threads on this blog, and is a bit of a genius. Shaun’s desire and passion for supporting Northern Ireland is evident by the fact he has travelled all over the world watching us, written a book about it, received awards for it, and he isn’t even English! In all my years of following Northern Ireland, I had somehow not met Shaun AT ALL until this day at the end of July 2006. And Shaun at the time had just released his amazing book on 10 years of following Northern Ireland. The book, There’s Always One, is mentioned in its own merit on another blog post, but it was a pleasure to meet Shaun and buy his book. We then enjoyed some pints in the Mulligans Irish Pub round the corner which was owned by a guy from Omagh. In there I met a few other boys from the Scottish NISC as well as some more NoE NISC. It was great craic and we stayed there for a few hours. As it was pre-season there was no football to watch so we just drank and chatted and I put up the ULSTER FRY GAWA fleg from the SoE NISC. Actually I think John has some photos of the weekend somewhere I’ll have to get them off him! 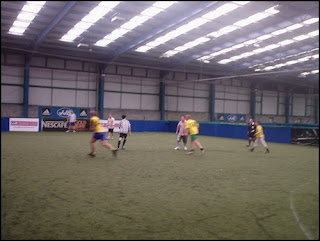 Soon we were heading in taxis to our “Night at the dogs” which Toddy had kindly organised. This was held at Picadilly Dogs Track on the edge of town. With the entry fee I got a free pint and a bet. Me and John then grabbed some greasy burgers/hot dogs before placing our bets. I only won one bet the whole night, but as I’m not a big gambler didn’t really lose much. It was great craic in there and funny that I was the only eejit wearing a Norn Iron tap and a silly green wig, the others were more sensible, though Squid in our club gladly wore his NI tap as did a few others. I watched a few of the races live from the outside but it was raining and pouring so thought the bar and the TV was a good option. I think I’ve only been to the dogs twice, the other time also in 2006 and at Poole Greyhounds. Its a great night out. After a while me and the Scottish boys (Moby and “Jug”) started singing some Norn Iron songs and it was a case of either those dressed up go out on the town and those who weren’t (like myself) head back to Mulligans where we were guaranteed a lock in as we knew the landlord. It was at the Greyhounds where I first enjoyed a conversation with “the hawk” (Davey) another crackin lad, from the NOE NISC. It was more beer and singing in Mulligans before John, Squid and I dandered back round the corner to our hostel. Up early I grabbed a full breakfast in the Wetherspoons and me and John met up with Toddy, Moby, Tom and a few others, none of who seemed particularly hungover. Owen Millar was booked on our megabus that night and we had to travel over to Deansgate to meet him. On the way I bought the new James Dean Bradfield (of Manic Street Preachers) single and a random green recorder, which I would play later that year in Copenhagen! The trip was not quite over. John and I pub – crawled into The Picadilly, Edwards and Wave before meeting Logie (I think) from the Scottish NISC at the Megabus Stop. Me, Owen and John headed south to London. Logie and co were heading north to Scotland. I was due in work at 8 am the next day and in the end made it in fine, though a bit knackered, however not before the bus broke down twice meaning Owen had to blag through the underground and buses without a ticket. It was a great trip, and money was raised for NI fan Scott Wasson, who had recently passed away. Here’s the details: