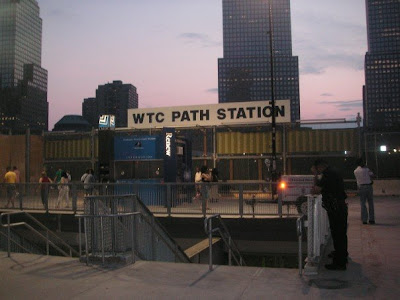 “All free souls beware; a moon is in my head” sings Echo and the Bunnymen’s Ian McCullough back in 1997. I never had any ambition to visit New York. As a kid I had often admired the Empire State Building, as an adult I had always resented the whole “America [sic] is the best” thing, a feeling we get from commercialism and the power that the USA holds over the rest of the world. So after the horrors of September 11th 2001 and my decision to travel the world, it would have been seemingly silly to overlook New York on my journeys. If I’m going to go there, now’s the time. It’s up to you New York… 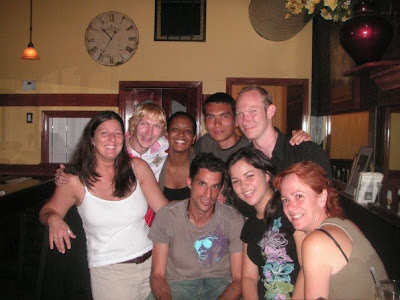 So I got my visa sorted with no issues and my flights booked. I flew from Toronto to Philadelphia to Pittsburg to La Guardia, New York. Three flights, about 6 beers and I was chilling out already enjoying my longest venture away from the UK. No problems at border control at all, but I did stay up for 38 hours so as to avoid another night paying into a hostel, when Toronto Airport’s coffee bar is 24/7. 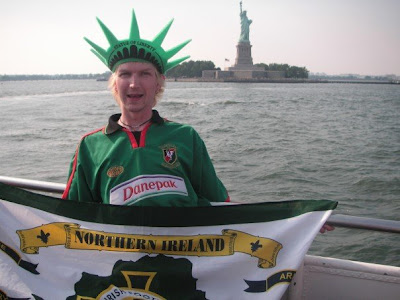 I landed in the Empire State just after lunchtime on a hot Saturday in July. I stayed in the largest hostel in the USA at Amsterdam Avenue and set about exploring Manhattan and beyond. The Circle Line Boat Cruise eased me in, taking me the whole way round Manhattan Island, with an excellent author as the tour guide – Malachy Murray. His book Unique New York is out there somewhere. 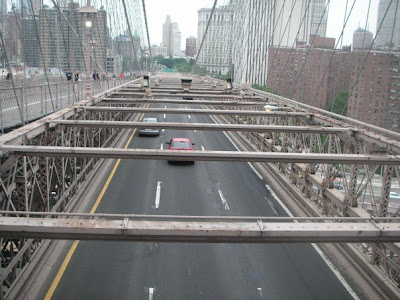 I saw Manhattan, the bridges, Brooklyn, Liberty Island, The Bronx and an amazing view of that famous skyline which almost pierces God’s sky. I learnt some amazing facts on board such as Thomas Jefferson invented the coathanger, Man a Hata means Island of Prosperity, 100 odd people died making Brooklyn Bridge and that Chicago had the world’s first skyscraper. After doing that I made my way round the various sights in the space of six days. I saw The Rockafeller, Natural History Museum, Lincoln Centre, Washington Gardens, Times Square, Central Park, WTC Site Path, Greenwich Village, Colombus Circle, Wall Street to name but a few. I walked across Brooklyn Bridge and got a lift to the top of The Empire State Building.
The two days I spent with Nina and Cassiano brought some fantastic memories. Just being on the subway with them and then seeing Macy’s shop, Central Park together, Columbus Circle and culminating in the epic climb up to the top of the ESB. It’s the Empire State Building. What a place! What a great view. It certainly did feel like a moon was in my head as I gazed graciously down at the mega city and the hordes of yellow taxis and commuters. After that we enjoyed some food at Dunkin Donuts, which Cassiano paid for and I’ll owe him a pint of beer next time.
I also made a visit to the Imagine Gardens/Strawberry Fields on the night of Ringo Starr’s birthday and mingled with some Beatles fans sipping cold tins of beer. There I met some gorgeous US ladies including Cia and Kylie who sported nice tans and red hair. Cia also surprisingly asked me if I “got a lot of sex”!! To which I replied I didn’t. If either Cia or Kylie had made an offer then I’d have been very much up for their beautiful charm. They were from Oklahoma and I’ve since added them as friends on internet phenomenom “Facebook.” Let’s have sex next time then ladies, life’s too short not to. I also felt it necessary to get my photo took outside the Dakota building, where 27 years ago John Lennon was shot dead. A lot of history on this one island. 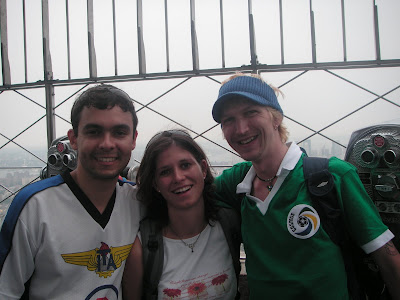 I hung out with people from the hostel most days, including Argentinian Juan, Brazilian Cassiano and German Nina. I also met up with my best mate Millwall Neil who was working outside the city for a few months. The night we met up, we got a good crowd together and ended up in a 10 dollars all you can drink bar called Aces and Eights Saloon. Find that if youre in New York – it’s a bargain. There was Zisis (a Greek-Aussie), Mark (Welsh), Justin (Canadian), Neil (my great English mate), Simon (an Aussie), me (this Northern Irelander) with Charlotte and Steffan turning down the night out and we met a few randoms on the way. Hot waitress Caitlin served us shots to mix with our AYCD beer. We also played a World Cup of Pool, with Ricky the Jamaican being beaten by Simon the Aussie in the final. I lost the semi final to Simon and was happy with that! There were so many memorable moments in New York, from having the South of England Northern Ireland Supporters Club (SOE NISC) fleg out at the Top of Empire State Building to the random trip to Staten Island on a wet evening, I certainly enjoyed my time under the halo of the Empire State. Quite deliberately and emotionally I started to play Echo and The Bunnymen’s song ‘Empire State Halo’ on my iPod a lot when in New York. I had owned the album ‘Evergreen’ for years but never played that song, now it has a real quality and I will remember it forever, look in the crystal ball. So I’ve done New York (and quite extensively at that, my plan to spend 6 days there paid off). I must make a point of visiting York now…
Bars Visited – (on route) Dock Street Brew Pub and Jet Rock Bar and Grill, Philadelphia, Mexican Restaurant, Pittsburg (in New York) Dive Bar, New York Brewing Company, Aces and Eights Saloon, Mr. Biggs, The Parlour, Cleopatra’s Needle, The Dead Poet, Hooter’s, Bourbon Street, O’Haras, Broadway Brewing Company (JFK Airport), Apple Bees Neighbourhood Grill (Staten Island).
Beers Tried – Blue Moon Lager, Budweiser, Bud Light, Hooter’s Orange, Brooklyn Lager, Yeungling Lager, Raspberry Beer, America Pale Ale.
Nationalities Met – American, English, Northern Irish, Irish, Argentinian, German, Turkish, Brazilian, Australian, Welsh, Dutch, Canadian.
Transport Used – Circle Line Boat, Bus, Subway, Bridges, Lift, Escalators, Air Train, Ferry.
Strange Currencies – American Dollars and Cents.
Visa Requirements – Yes, even British and Irish need them nowadays for any visit to the USA. They can be sorted here: visas for USA.
Where I Stayed – Hostelling International, Amsterdam Avenue, Upper East Side Manhattan.
Average Price of a Pint of Beer – 4 US Dollars.
Favourite Food – Key Lime Pie Donuts and Blue Raspberry Ice Cream.
Favourite Drink – Dr. Pepper or Cherry flavoured Lemonade.
Favourite Thing in New York – The Empire State Building.
Moving Moment – A second of silence to contemplate how good life is, while staring at the world from the top of The Empire State Building.
Key Song – Echo and the Bunnymen – Empire State Halo.
FACT – The Empire State building was opened in 1931, 31 days before expected and 9 million dollars below budget. It is currently the tallest building in Manhattan.
Here’s a wee video I made at Broadway on my last night in New York, July 2007:
VIDEO OF ME AT PHILADELPHIA AIRPORT BEFORE MY FLIGHT TO PITTSBURG AND THEN ONTO NEW YORK:
VIDEO OF ME ON HUDSON RIVER ON THE CIRCLE LINE CRUISE PAST THE STATUE OF LIBERTY:
VIDEO OF ME AT STRAWBERRY FIELDS, IMAGINE GARDENS, CENTRAL PARK, NEW YORK ON THE NIGHT OF RINGO STARR’S BIRTHDAY:
VIDEO OF ME AT TIMES SQUARE ON MY LAST NIGHT IN NEW YORK, JULY 2007:
VIDEO OF ME ON CIRCLE LINE BOAT CRUISE LOOKING BACK AT MANHATTAN:
VIDEO OF ME, CASSIANO AND NINA CROSSING BROOKLYN BRIDGE:
Join 15,017 Monthly Readers! If you enjoyed this article and LOVE travel and SAVING money, get e-mail updates from Don’t Stop Living – a lifestyle of travel! (It’s Free) 😉 Jonny