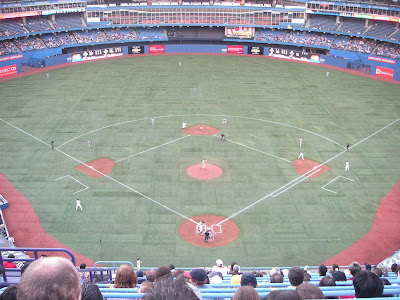 I first visited Canada in 2001, checking out Toronto, Niagara and Winnipeg. I was there with family, mainly for my cousin Alison’s wedding, but we decided to see the sights as well. I promised when I flew out of Toronto Pearson Airport in September 2001 (a week before the fated 9/11 terraced attacks) that I’d go back. So I waited six years then I did, but I wanted to explore Toronto on my own and make a city I knew a bit about the first stop on a mini world tour during 2007. I arrived there on Canada Day (1st July 2007). It all kind of ‘fell into place’ like one of them jigsaws, towards the middle of May 2007, I had noticed some adverts and dacent PR in London papers for cheap flights to New York and Toronto. Either way I was going to do both, so I booked a cheap flight to Toronto with Canadian Affair. Then I would work my way round the world and back to London from there. So I got a lift from my old lodgings in Dartford Kent to Barnehurst station on the 1st July 2007. My housemate John gave me the lift, and that was me set off…backpacking around the world… 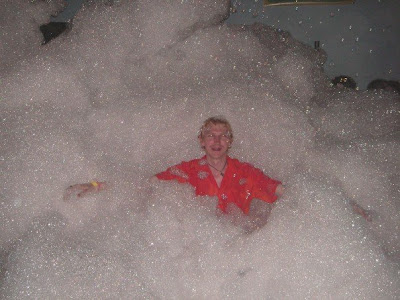 I met a lot of cool people in Toronto while staying at the Planet Traveller in the nice Kensington Market area, including Nina from Germany (who I would later meet again in New York), Lee from Essex (who went Baseball with me) and Mike from Kent (who was on his way back from living in Australia, taking in most of North America on his way home). That first night I could hear a pin drop on the streets. It was classic. It was an eerie feeling, the place was dead. Sunday night, bank holiday and I travelled through the biggest city in Canada on Canada Day with Mike and Tash from the hostel. Both were from England and in the same rock band: Milestone Method. We went to a free rock festival by the pier at Lake Ontario. We sank some beers in there, I also enjoyed a beer in the pierside bar. My world trip had begun. I would later meet some great irish lads Michael and Nigel in Mick E. Fynns pub (re-dreaming the past as I had been there six years prior and the old place hadn’t changed one bit).
It was all not a dream. 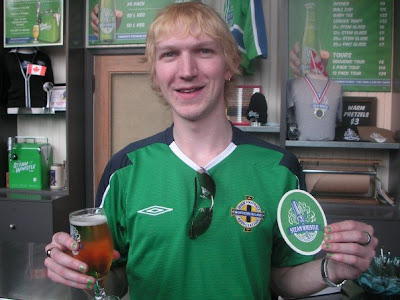 In Toronto I saw the Blue Jays play at the Sky Dome (Rogers Centre), which was my first ever Baseball match. It only cost like 3 dollars. Bargain. I went with Lee after a long walk through the city. We enjoyed beers by Lake Ontario, as well as a free one in Steam Whistle Brewery. That’s right! Beer is free at Steam Whistle Brewery. It was my old workmate Lisa Brailsford who told me that. I climbed CN Tower for a spectacular sunshine view late one afternoon and enjoyed a bottle of beer up there with Mike and Tash. I had gone to the top of CN Tower before. This time I savoured the view a bit more.
Totally unbeknown to me before travelling or even choosing Toronto, the Under 20s World Cup just so happenned to be in Canada at the time! So I watched two World Cup football matches! (Mexico bate Portugal 2-1, Gambia bate New Zealand 1-0). There I met Portuguese Pedro, who spoke great English. I also met Paul, Christina and Tanja who were all ‘soccer’ fans and wearing different Italian League teams shirts. I attended a free rock festival (handily organised by the pier on the first two days of my trip) and a foam party (with many sexy Candadian ladies getting soaped up in the pumping ‘Cantina Charlies’ nightclub). 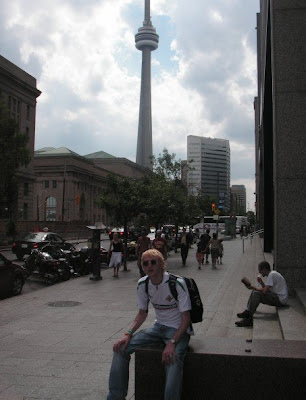 Other moments included traipsing through the shops in China Town, enjoying the fake beach by Lake Ontario and a major coincidence one night. I had been speaking to the artists Jamie and Kevin who were from the USA and staying in my hostel. They had an argument with their mate Brynn, so we decided to go to the local ‘pub’ together. It was Ronnie’s Local, on an excellent wee side street near the hostel. There I also met Annie Commisso, who worked in a bar called Cocktail Molotov and invited us over. We ended up going with two Belgian lads and Mike Burkimsher from the hostel. Yet on the way we decide to stop at a random bar called ‘The Press Club’ on hearing some music. We grabbed some beers in there and this girl then shouts at me “where are you from?”. I replied “Northern Ireland.” She said in a Northern Irish accent “Oh…I know that. I mean whereabouts?”. Well I was shocked! Even more shocked when I found out it was Kylah McGlade who was in the year above me at Primary School (Kilmaine) and whose younger brother Kevin I also knew. Some small bloody world as they say. A serious of unforeseen coincidences affect such events in our lives every day.
I had a fantastic time in Toronto (again) and thought it would be best to hop over to New York next and leave Montreal, Ottawa, Edmonton, Banff, Calgary and Vancouver for another day. That’s my way of saying I’ll be back in the land of the Maple Leaf… 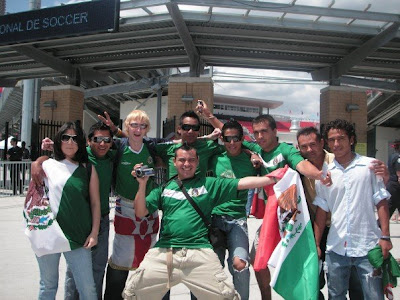