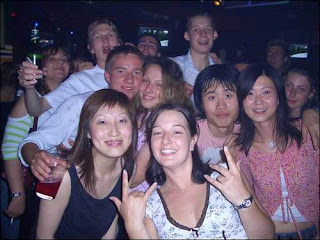 My first Summer living in Bournemouth, Dorset was still probably my busiest time ever. At the time I had 3 jobs, all running at the same time! But I still loved it, enjoyed every moment of it and look back and take some great memories with it. To go with my part time jobs in Tesco (Branksome, Poole) and Heathlands Hotel (East Cliff), I was also working as a seasonal seafront assistant for Bournemouth Borough Council. I had unfortunately broken my arm in March 2004 (on my birthday night out) and from the moment I could use it again, I applied for two extra jobs to bump up my cash and help me through my first full summer living in England. One day whilst walking past Bournemouth Pier, I asked in the Ice Cream kiosk if they had any jobs going. At this point I was directed to the then Oasis Cafe and Bar (part of the Pavilion, where I now ironically work!!) where I met Danielle Allwood who gave me an application form. Within a week I was working on the seafront in various kiosks and outlets mainly serving customers. It was a brand new start for me and a move which really got me thinking about the world as a 24 year old. There were so many nice people to meet from so many different cultures. 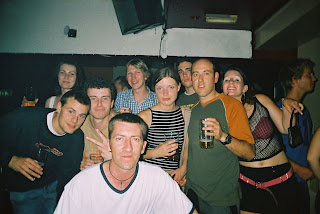 My manager was Matt Calkin (Manager Matt) and I was working with Claire, Gaby and Christian Matt, who were all English. However within a week or two Bournemouth was rife with foreign students, who all flock there in the summer. Suddenly I found myself working with Germans, New Zealanders, Latvians, Poles and Frenchies amongst others. For the duration of my 3 years in the job I would remain the only Northern Irish person (and Irish person too). Bournemouth Borough Council used to own most of the outlets on the seafront. The main ones they owned were all the beach units, the pier, the Showbar and most outlets. Hours of work would be basically as much as we wanted and weather permitting. I didn’t sell many ice creams in the pouring rain. We would normally open all the kiosks around 9 am (hungover and all) and they could close at any time on busy Bournemouth summer nights. The firework Fridays were the best banter. We would be so busy in work constantly serving and then would go out for beers in the evening straight from work. The work was wide and varied as well. Somedays I’d be in the trailer trying to chat up the lovely Emily (from the Merry Go Round Carousels), other days I’d be in a busy Mobile 2 Ice Cream hut selling anything but 99s as they didn’t have them. Other days I’d be with the ageing John Vacher in East Cliff cafe, working in the heat and serving ladies with their breasts on display. I’m a British male. I stare at breasts and I enjoy it. Whether they’re big or small I always like to see them. We need more topless ladies in Bournemouth. The social life on the beach was fantastic. Their was a lot of in-flirting and sex within the groups. I managed to steer clear of that myself, having specialised in shit dates and one night stands. I did go out with Nethe from work, but mostly I was looking for casual sex, which strangely Denise provided me with at the year’s end after a night on cocktails. Denise was a friend of a friend’s from University. I never thought I’d see her nude, but then, life has a funny way of sneaking up on you ah who…(Alanis Mozarella). Anyhows the social life meant Tuesday night football at Kings Park or Littledown. It used to be the UK v. The Rest of The World. We would always lose – they were faster. My housemate Neil used to play for us. We also enjoyed a beer at Littledown before heading out that night. The nights originally we went to The Moon in The Square (Cheap Wetherspoons) and then onto Walkabout. I made a great friend in Rene, a former East German (who I would later visit and stay with). We also visited Slam nightclub a few times. Times came to an end and both Rene and Mona (two Germans) had left Best Break by the end of July. Still we enjoyed a good last night in Walkabout for Rene’s leaving do. Thanks to Rene we have some photos of this fantastic night. After that, the social nights transferred to Berlins! It was ironic really, but those nights were £1.50 drinks in the nightclub. One of my best mates at the time was Jody Casey, who I got a job for in Best Break. Jody originally said he would never take a job that wasn’t in a bar (as did his mate Total Mike Bennett), but I convinced him otherwise and he was soon serving ice creams with me on the beach. Jody and I would always go down to the social nights together and meet loads of our work mates in there. It was such great fun and the time was slipping away. By the end of August everyone had gone back to their respective countries (except the British ones and the odd foreigner) and my time serving ice creams and working on the busy beach were over. Well for now. (I would return in 2005 and 2006 for the same job again!) 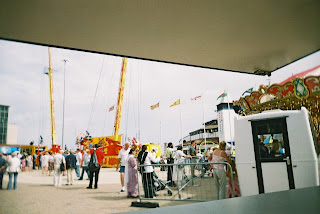 We also used to get a lot of agency staff, who I was happy to work with, but they were in one day and gone the next. That was the way it was. Working in Best Break opened up my mind to other cultures than that of my entire lifetime of Northern Ireland and this was a Godsend in this beautiful world. I am very honoured to have met so many people from different cultures and enjoyed my time with them. More importantly to keep touch and always offer your wisdom, thoughts and knowledge to them, and take theirs into your life. I also worked in “The Trailer” the day the Queen was in town, I was selling tea and coffee just 20 yards from her. 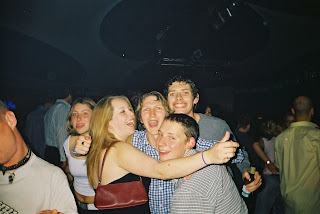 If you do ever learn anything from me or from my posts, take this point: try and enjoy something about everyone you ever meet and in as many instances as possible try and keep touch with them. You’ll have a wider circle of friends, more stories to tell and ultimately more fun.

People I worked with –

(Apologies to those I’ve left out)

1 thought on “One Mr. Softee with a flake please: FIRST Summer at Best Break, Bournemouth (Summer 2004)”