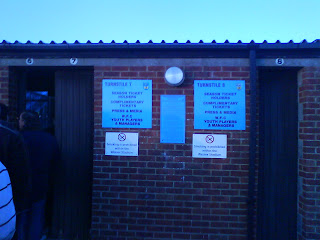 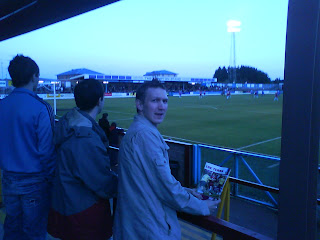 Dan, Patrick and Vicky were all working till about 5.30 or 6 pm. I picked them up from Dan’s house at approximately 6.31 pm, with Weymouth a 1 hour drive maximum, allowing for traffic, we should make kick off for 7.45pm. On the way, we noticed that there were ‘Hidden dips’ on the road. I searched in vain for Doritos dips to dunk my tortillas in. It was a party car of puns and soon we were stuck in a traffic marmalade some 7 miles from Weymouth. I needed petrol and we stopped for cash and fuel. For the only time ever in my life, I drove off without paying, not to fear though as I parked and ran back in to pay. It was now really close to kick off and we thought we’d miss it. We weren’t sure where the ground was, but low and behold we found it! It was £1 to park (fairly reasonable I thought and the money goes to the club). 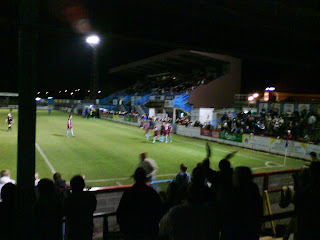 No tickets needed, it was pay on the gate and the match had just kicked off when the four of us made it through the turnstiles. Weymouth FC, known as The Terras were playing Droylsden FC that night. Droylsden are from Manchester and play at the same stadium as Football Club United of Manchester (FCUM). This meant they had very few travelling fans due to the fact it was a Tuesday night, it was mid month, it was in Weymouth (miles away), Droylsden were already basically relegated…Plus the big incentive for Weymouth (who to be fair had a decent team) was that they were STILL in the relegation zone before the match, and by goal difference (they were 11 goals worse off than Halifax Town, who eventually also stayed up). The division was the Nationwide Conference (the FIFTH division in England). Early on, it was notable that the standard of football was much lower than that of AFC Bournemouth. Five former AFC Bournemouth players were even in the Weymouth Squad for the season 2007 – 2008. This sort of thing happened a lot. That night James Coutts and Marcus Browning both played for the Terras. Early on, Weymouth took the game by the scruff of its neck. They looked keen to get the three points and stay up. Stuart Beavon opened the scoring with an early finish and it was looking good, as the four of us took a place behind the nets (which was the wey Weymouth liked to attack second half!). Soon though the blue of Droylsden had come forward and Jamie McGuire slotted home a great equaliser following a run down the wing at the nearside to us. At this point a greasey burger and a beer were in order, and I got a cheeseburger as the half time whistle went. Then we headed up to the Weymouth FC official bar. 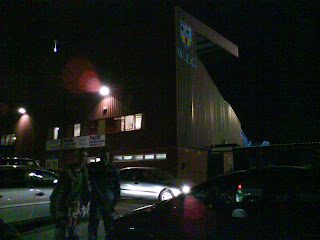 In there I enjoyed a quick Corona with Lime as I was driving. A nice bar with loads of photos up, and bigger than the one at Colchester United’s Layer Road (some 5 divisions above). I also met a Belfast guy called Tom! I gave him a business card and invited him to join the SOENISC. I was dressed predictably in a Northern Ireland home shirt and had my six county fleg with me. It was back off down the stairs for the second half, which in a wey would make or break Weymouth’s season. 1-1 was not quite good enough at the time to sneak out of the relegation zone, and rather than rely on results elsewhere it was important for the claret shirts of Weymouth to get on top and score the all important goal. Dan and I enjoyed standing behind the goals and joining in the singing with the Terras fans. Patrick and I also did an “up the Terras” chant. It was actually quite a cold night for April, but soon Weymouth banged in a winner and it was 2-1. The fans went wild singing “Oh we do like to be beside the seaside, oh we do like to be beside the sea.” Other songs included “Shit for Shit” at Droylsden subs and “Weymouth Till I Die”, which as Dan said had less urgency than the songs we were used to at Boscombe’s Dean Court. The final whistle went and Weymouth were happy. They had climbed out of the relegation zone and also had two more home games left. Incidentally the home game the following Saturday they also won 2-1 which virtually confirmed their place in the Conference for the third consecutive season 2008 – 2009. They would be only one division about Dorset rivals AFC Bournemouth (The Cherries). Food for thought 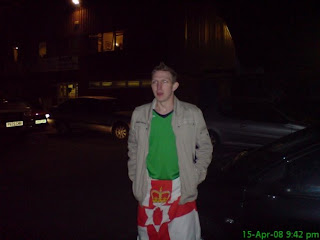 Before we left I had a read of the night’s programme and the Farsley Celtic programme (which I also bought). The Farsley Celtic match was the match we were supposed to attend in December 2007 as a supporters club and it was postponed. We never made it to the postponed match, but I had finally made it to the Wessex Stadium to cheer The Terras, and even better was featured on a page in the programme for the Farsley Celtic match. A pity we hadn’t got to go that day, but I have the programme for the memory. Dan chatted away to a Weymouth fan while we waited for the traffic to clear. During this time Patrick and I did some puns, we witnessed a car crash and I posed for a photo outside the stadium’s main stand. It was a good proper Tuesday night match at the football.

After that we headed into town (parked by Weymouth Beach) quickly where there was a party on in a bar called the Lazy Lizard/Lizard Lounge. We sat and relaxed in there while I eyed up beautiful girls in the bar. I spoke to Vicky and Sam, two lovely lasses whose cleavages were erectional. I wanted them quite a lot, but I never told them, I took my seat relaxed and drove home as the next day would be work. On the drive home, I mistakenly drove the wrong way down a one way street, it was funny at the time. It was a nice trip and only one thing was missing: I never shagged Vicky or Sam. I should’ve done. But they might not have wanted to. My destiny will keep me warm.