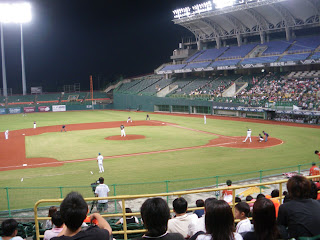 Back in 2007, I went to watch Baseball for the first time. It was never a sport that would interest me totally and really as you get older in life you just like to experience and see new things, even if you don’t like them that much. But actually I’ve now been to Baseball twice and I have to say I loved it both times! The first time was in Toronto Canada when I did a whirlwind world tour. That night, Lee Price (from Essex) and I went to watch Toronto Blue Jays v. Cleveland Indians. A good evening’s entertainment was had and in fact you can read about that Baseball Night on a previous blog post on here. That match was at the Rogers Centre/Sky Dome, a fantastic building which is part of an impressive Toronto Skyline. Well now I’m in Taiwan and my mate Millwall Neil has become a big fan of his local Baseball team – The Tainan Lions! 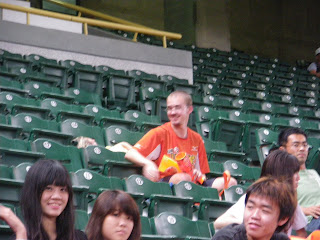 Neil obviously needed to find another “Lions” team to support in the absence of his beloved Millwall, and so it was the turn of the Orange attired Tainan Lions – ORANGE ARMY! Neil has been all over Taiwan watching and supporting the Tainan Lions for a good while, since he’s lived here almost a year. So Neil invited Natalja and I to the baseball on our first Saturday in Taiwan. The match was an away match, to be played in the massive city of Kaohsuing. This gave us the easy opportunity to see another city, Kaohsuing which is Taiwan’s second biggest city after the capital Taipei. We left for Kaohsuing early that day, and as you can read/see we did a stop off at Lotus Lake in Northern Kaohsuing (near Zuoying Station), then headed into central Kaohsuing before the bus trip on Bus 60 out of the city to Cheng Ching Lake, the location of the big baseball stadium here in Kaohsuing. Kaohsuing were at home, and slight favourites on the night but we would be supporting Millwall Neil’s “Tainan Lions” for the night. Tickets were 300 New Taiwan Dollars (about £6 – so cheaper than a Glentoran football match). After a short walk and a visit to a 7-11 to stock up on beer and food (you can take it all into the baseball with you), there we were with just 1 minute until first pitch (baseball equivalent for kick off) inside the Kaohsuing Cheng Ching Lake Stadium… 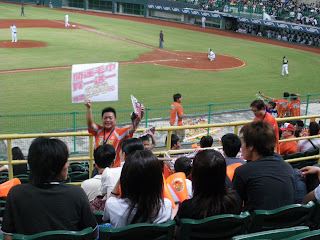 We took our seats up near the back of the first tier – in truth we could have sat anywhere. It was close season and wasn’t a sell out. The cheerleaders and “singing lot” from the Tainan Lions were getting stuck in from the off. Random tunes were pumped out on a range of instruments, including drums, whistles and random orange plastic sticks. Right at the start I noticed we were the only 3 foreigners in there – but we were happy to stand out from the crowd. 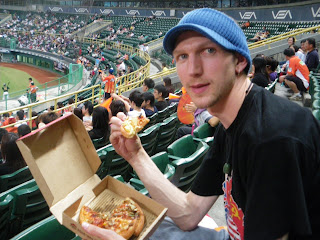 There were loads of PR girls and guys walking round. But they weren’t in your face. Their friendly smiles and basic charm could sell a lot more than UK PR girls I tell you – especially those stuck up PR types that I had the unpleasure of studying with once upon a time in Bournemouth. I thought about how out of place those girls would have been here. The Blue Girls were selling beer, the Orange shirted guys selling Lions merchandise. Other PR girls gave us FREE cereals bars (Soy Joys – I loved them). The place was swarming with orange, the Dutch would have felt at home here. I put my Norn Iron flegs up in the stadium next to where I was sat. I tried to get into the atmosphere. Our team, the Tainan Lions were away and not expected to win. 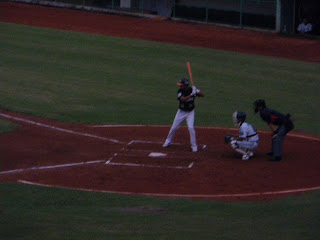 However we went 1-0 up – a home run we got in the second game. It was such a relaxed and calm atmosphere. A friendly family vibe, we were made to feel welcome. One of the gardcore Taiwanese Lions fans even came over and said hello and thanks for coming. In front of us was a Tainan resident, who spoke some English. I asked how he knew English. “I used to live there…in Loughborough”, and straight away we chatted about the university there – where he had studied and I had spent 2 nights there back in 2005. In Loughborough I represented Bournemouth University’s Nerve TV there, collecting 2 awards and getting stuffed and drunk for free. This guy had spent 2 years studying there and was now back home in Taiwan. 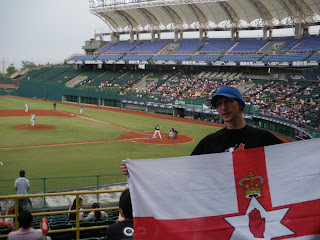 I took a walk into the official club shop inside the stadium. There was the permanent club shop for the home team, the LA New Bears (Kaohsiung New Bears really, but they just want to sound American). For the away team they have a club shop which is temporary for that match. The guy in there serving was so surprised to see a “Why Gorran”in there that he gave me a total bargain. For just 100 dollars (2 pounds) I got:
– two orange plastic hammer type things
– one orange Tainan Lions fleg
– three free Soy Joy Cereal bars
I was now a part of the Örange Army””. 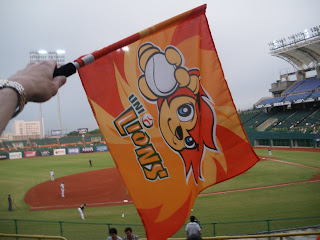 I returned to the stands (green seats incidentally) and started flying my new fleg, mixed with flying my two NI flegs. I draped them both over the seats – the Northern Ireland national fleg I carry everywhere and the Our Wee Country football fleg as well. Meanwhile at the front the real Orange Army were in full voice and drum beats pumping as we were 1-0 up. Although it was Orange Army all the way, the team we supported Tainan Lions played in green for the day. In fact it was green and white. Especially for me as the unexpected Ulsterman in the crowd. Kaohsiung were in white tops, as you can see in the photos. Soon the Orange Army were behind, losing 2-1 and not really playing well. If you get into Baseball ever, try and work the rules out. I don’t believe its easy, but then this was only the second match I’d watched in 20 years. 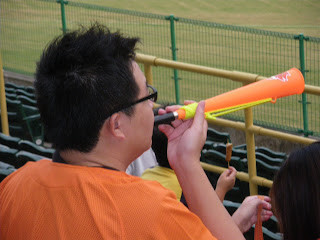 Both sets of fans were noisy, and separated, though they didn’t need police or security. At one point I also ventured into the home end, past a VIP Section and countless take away outlets. They love their sport here in Taiwan, and I’ll tell you what – the prices of things inside the stadium WEREN’T inflated. Like Neil says, just because its a special event doesnt mean the price is higher, a beer, a tin of Coke or a bar of chocolate is the same price in a local shop as it is inside the Baseball Stadium! If only the UK thought like that. As the night got dark, Natalja got a bit bored of the Baseball and used the time to sleep across 3 seats behind us, clearly unbothered that she had missed the action. We would all need the sleep, the next few days would be spent without a hostel or a bed, sleeping on trains and buses on our Taiwan Tour. 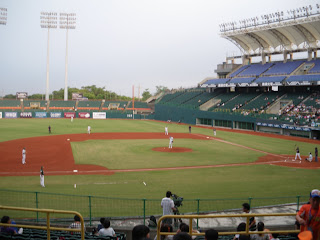 One of the pretty Blue Girls came round and I bought a beer each off her, about 29 dollars a tin – bargain really. They were dressed in tight white tops and blue pants, rather like USA style cheerleaders. The Dominos Pizza lady walked past a few times as well and we decided to go for the 89 dollar pizza. They were mini pizzas, but the first non-Far East food I’d had in weeks. We had a different flavour each – and swopped. One spicy, one hawaiian and one chicken. The night had arrived but it was still scorching – the heat of Taiwan really was incredible. As we finished our pizzas, the match was slipping away from our “Tainan Lions.” Now 3-1 down and with just 4 games in total to play, it looked unlikely for a result. 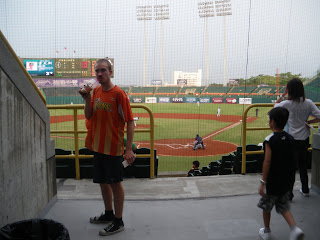 At one point we had about 5 players on the field at once and as Neil said it was the best chance we had to win the match – if we had got 2 or 3 of them in – past fourth base – then we would have drawn or won. BUt heading into the last match we were still 3-1 down and were playing poorly. Some unhelpful and unsportsmanship play from Kaohsiung made it hard for the Lions, but soon all the chances had gone and we had to concede defeat. For me, just another Baseball match experience, for Neil a defeat of his favourite team and for Natalja an excellent chance to sleep. We left the stadium and decided to head into town. That night I had wanted to stay up all night before getting the bus to Kenting for the Sunday morning. But Neil and Natalja suggested a hostel. 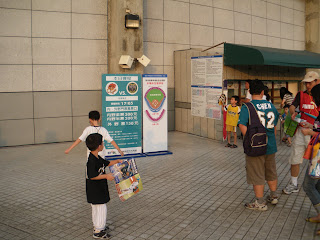 Neil had the phone number of a local hostel called the 202 and went to a coin box to check for vacancies for the night. It was around 9.30 pm. They said no vacancies (it was a Saturday night) so in the end we were doing the “all nighter.” First it began by going to the nearby park (past a section of Cheng Ching Lake) to watch some random singing going on in a Marquee area by lots of tea huts and fast food outlets. We had already had our food at the Baseball, but fancied a tea. I chose a cold lemon tea. It was a festival of “diversification in vegetarian food new boundary” festival” (as the poor translation went). 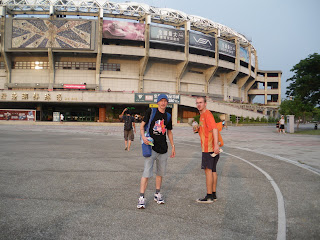 I don’t remember many of the songs, but George Michael’s “Careless Whisper” was sung and I recorded one of the songs here:

We relaxed in that park listening to the music, before heading to the nearby bus stop, where a delay saw us finally get the number 60 bus back into the city centre of Kaohsiung. From there we spent the night/early hours enjoying more of Kaohsiung, but the Baseball trip was over. My second ever match, and I have to say it was fun! 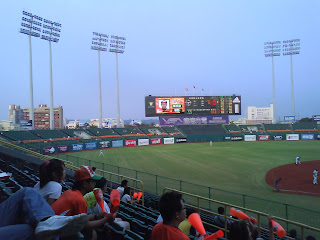 What was it – Live Taiwanese Baseball.

Where was it – Cheng Ching Lake, Kaohsuing, South West Taiwan.

Cost – Match ticket 300 New Taiwan Dollars. £6. Beers 39 dollars. Souvenirs 2 dollars. Pizza 89 dollars. Got a bus there and back plus brought in some of our own beer and food. Total cost less than £12.

ORDERING PIZZA LIVE AT THE BASEBALL: