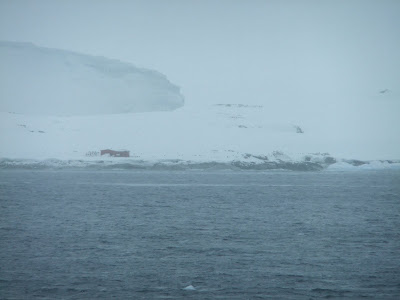 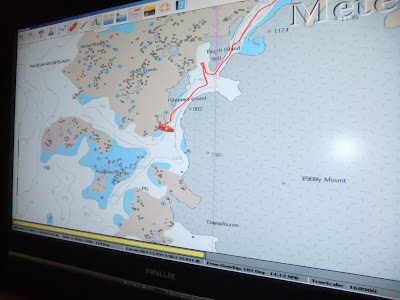 The plan was never to go to the South Pole (on this trip anyhow), but somehow many people believe that Antarctica and the South Pole are the same thing! On one particular day of the trip however, we realised we were as far south as we would go on this trip, the captain even announced it onboard. 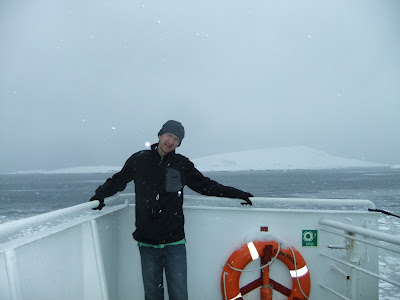 So this post will show just how far south I have been to date on this planet. In 2007 I was in Reykjavik, which is the furthest north I have been. In 2010, I reached the furthest south point, the only marker for which was a lonely leopard seal resting on some pack ice. Oh and a photo with my Northern Ireland flag. 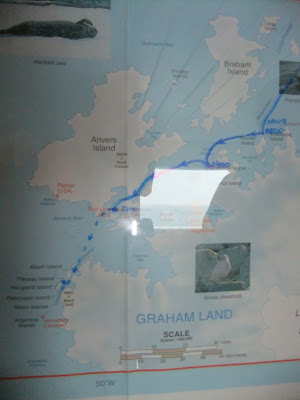 That day on board the boat, the plan was for a Zodiac Cruise round Pleneau Island in the morning and a trip to Petermann Island in the afternoon. 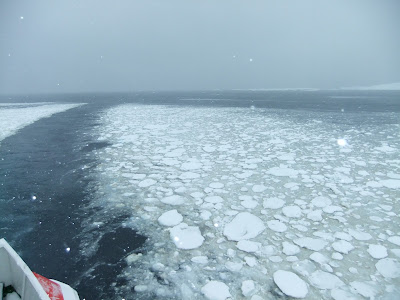 However poor weather conditions, not just in the air, but in the sea. Pack Ice, Snowstorms, blizzards all led to poor visibility and the crew and captain were forced to make the decision of no landin. 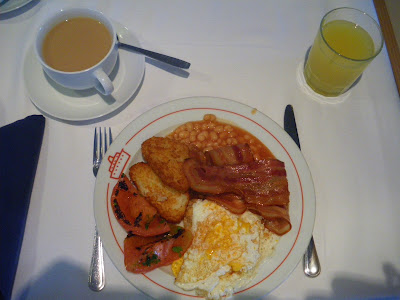 This was obviously very disappointing to be stranded on a boat in Antarctica all day. But I made the most of the time, catching up on some sleeping, drinking lots of tea, enjoying the all you can eat meals on board, updating my notes etc. The yummy breakfast on board had already set me up for the day! 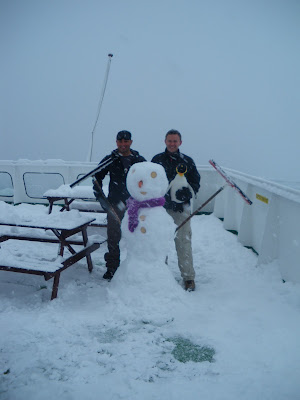 We built a snowman on deck. That’s Suman and Scott, both from Melbourne in Australia. 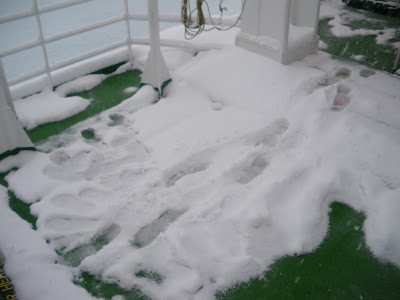 We had a snowball fight on deck.
PAUL’S VIDEO OF THE SNOWBALL FIGHT: 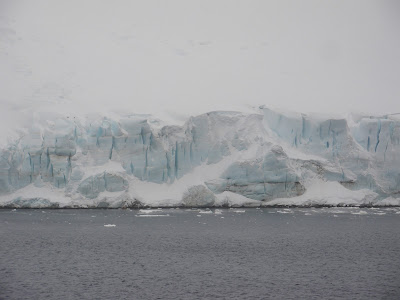 The views continued to be outstanding even on this very cold, low visibility day. 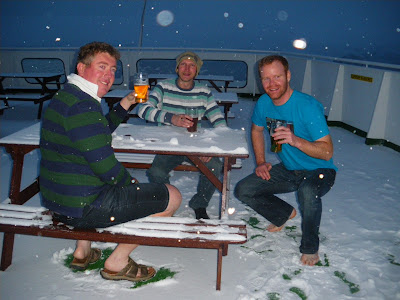 Russell, Mike and I even had a beer out on the balcony bar of the Polar Bear Bar. 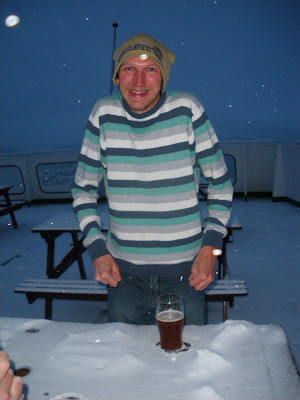 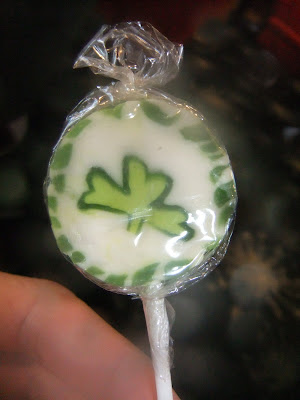 And before that, the afternoon had been fun. Relaxing on board and I was given a special lucky Irish shamrock green and white sweet from fellow Irish lady on board – Rhona O’Connor. 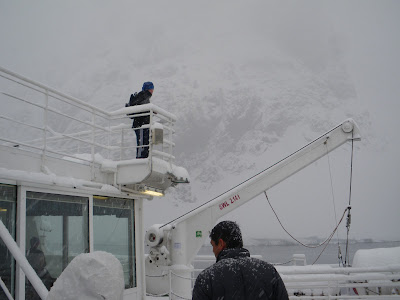 By mid afternoon, the torrential blizzards of Antarctica had gotten so severe, that we were informed that we could not land at either Pleneau or Peterman Island at all that day. Even Plan B was ruled out – a visit to the further south Vernadsky Ukranian Base. Which actually produces it’s own Vodka. 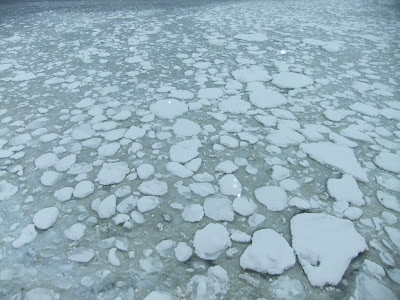 The pack ice was in high quantity (as you can see) as we stared down at sea from the ship. Safety had to come first, especially with the previous Gap trip to Antarctica having a sinking of the ship the MS Explorer. So we accepted the fact that we would have to turn around. 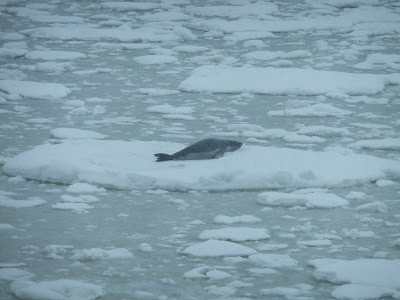 Not before we saw a lonely leopard seal nestling on a piece of pack ice. It was almost exactly at this moment when the ship did a full turn and we headed north again, looking to dock that night at Port Lockroy. 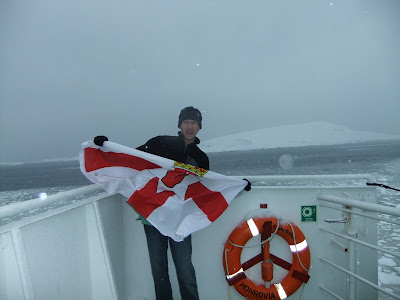 Before we turned, I took the opportunity of a photo with my Northern Ireland flag. This was taken on board the ship at the position of 64o 57′ S, 63o 38′ W. This was as far south as we ever went. 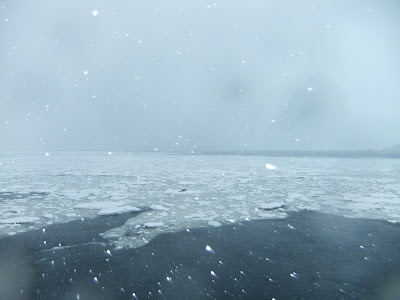 The leopard seal sits bravely as our ship heads north again. As I waved my goodbye to what lay further south, I contemplated I may never ever be that far south again. 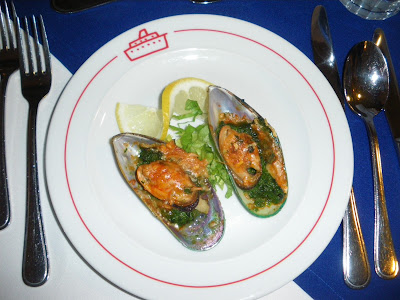 After a speech about the day’s activities, we planned the following day, which included a definite visit to Port Lockroy, the British Base. I was lucky to be at the same table as Nikki Rickett, an English girl working at Port Lockroy. We had gorgeous mussels for a starter. 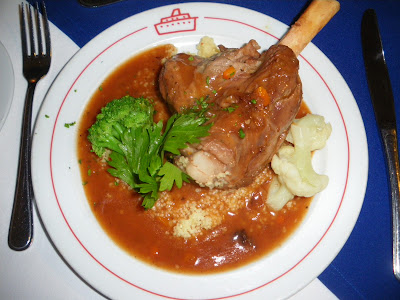 It was lamb shanks for main course. 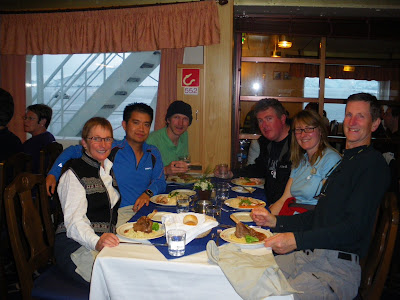 We had a good chat at dinner that night and I was immensely looking forward to the following day’s activities which were expected to feature a visit to the British Base Port Lockroy (where we would dock overnight), the world’s southernmost Post Office and the dreamy lands of Neko Harbour also awaited, within 24 hours we would have stepped foot on the actual mainland part of the continent of Antarctica…
KEY SONG:
BONNIE TYLER – TURN AROUND (TOTAL ECLIPSE OF THE HEART):
MY VIDEOS –
VIDEO OF THE BLIZZARDS ON DECK:
VIDEO OF THE FURTHEST SOUTH WE GOT:
Join 15,017 Monthly Readers! If you enjoyed this article and LOVE travel and SAVING money, get e-mail updates from Don’t Stop Living – a lifestyle of travel! (It’s Free) 😉 Jonny

1 thought on “Peterman, Pleneau and the Furthest South We Went *”