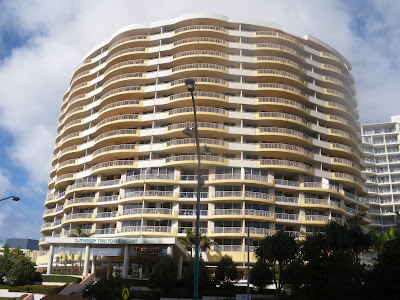 Coolangatta – great name for a town/city that. Don’t you just love it. 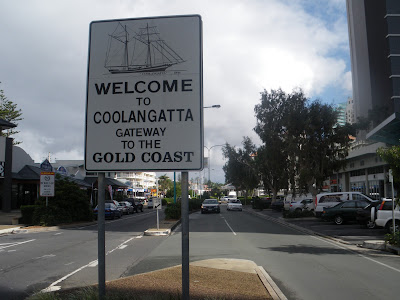 I spent just over a day there as part of my road trip from Tasmania right up all the way to North Lakes (and later back to Parramatta). The reason I made the stop off in Coolangatta was to visit George Sutton who once worked with me at Best Break in Bournemouth. Coolangatta is “the gateway to the Gold Coast”, its just north of Tweed and therefore in Queensland. Tweed is in New South Wales. There is a border marker at a roundabout (will cover that on my next report on Point Danger. 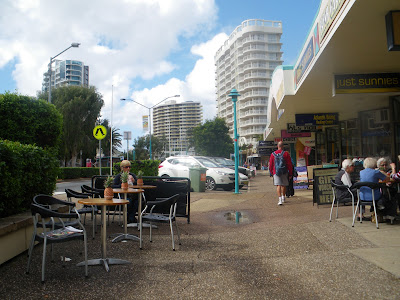 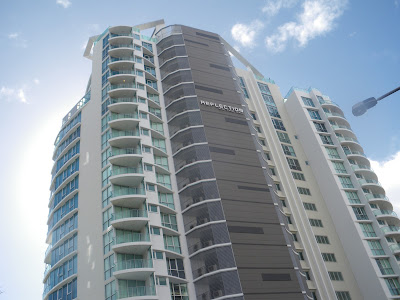 High rise building in Coolie – there are many of thesuns. 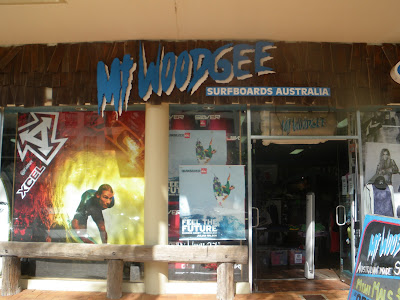 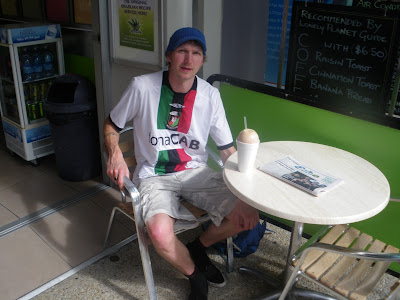 Relaxing in Coolangatta with a smoothie. 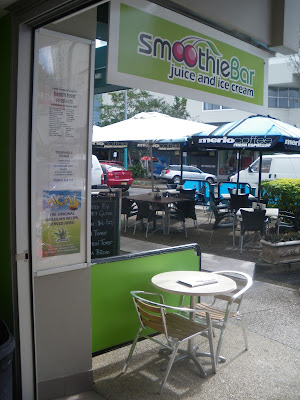 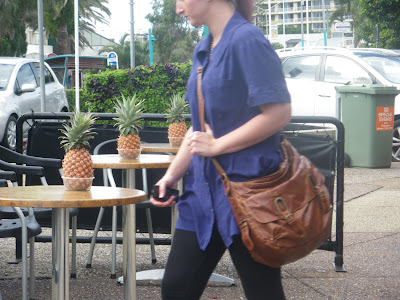 Pretty girl walks past a hat-trick of pineapple cocktails. After a walk all round the town and a wee jaunt to the beach, I found solace in the free parking and afternoon sun of Coolie seafront. 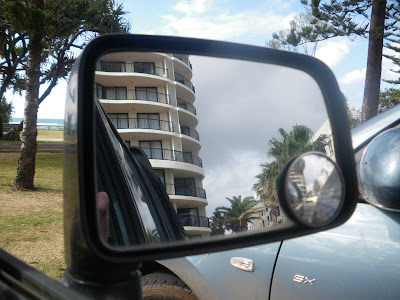 For, it was there in my car that I decided to have a well needed afternoon nap. 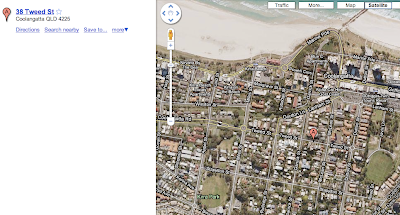 Then the text came from George and I went to his place on Tweed Street. 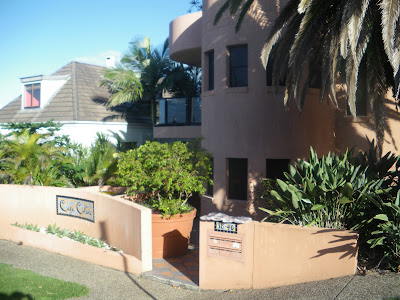 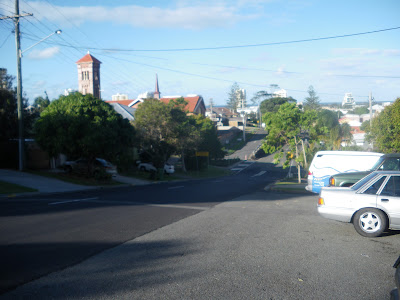 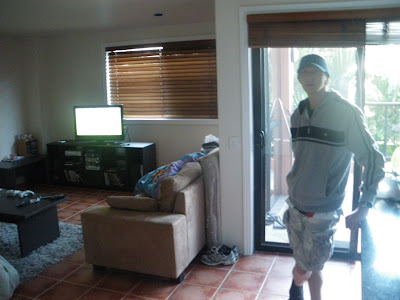 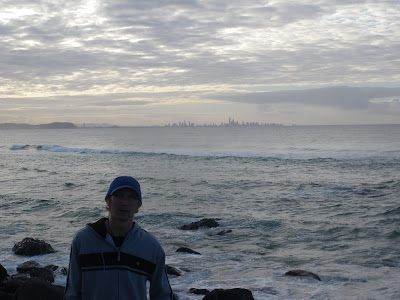 After arriving at George’s and getting a well needed shower it was off on a wee dander by Coolie sea front, starting at Kira, a world famous beach for surfing. 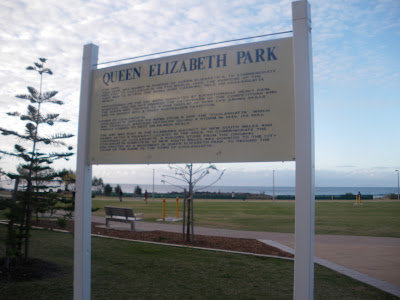 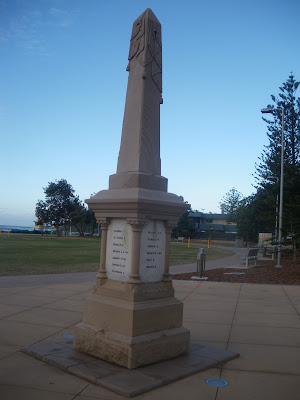 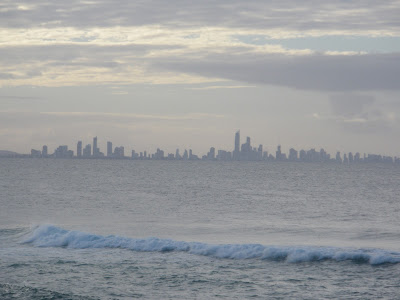 Amazing view up the coastline to the skyscrapers of Surfer’s Paradise – yes that’s the name of the city! 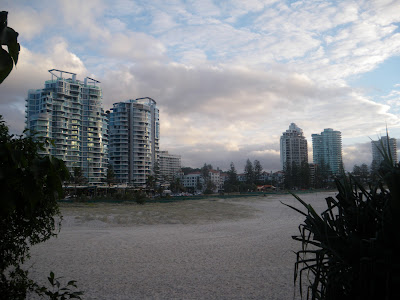 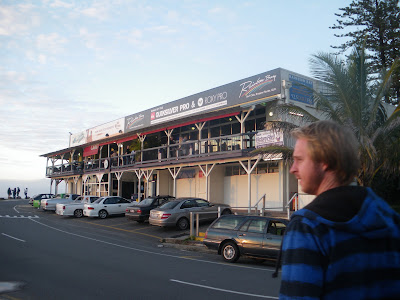 Rainbow Beach Surf Club. And my mate George sneaking in! 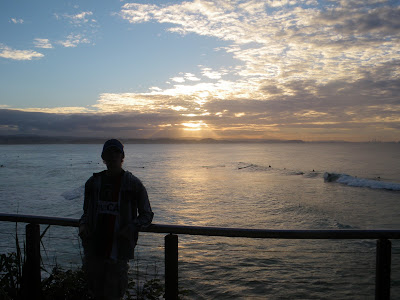 It was a nice wee dander along the coast and soon we were outside the Surf Club. Just in time for Happy Hour $3 schooners of XXXX Gold (for me anyway). 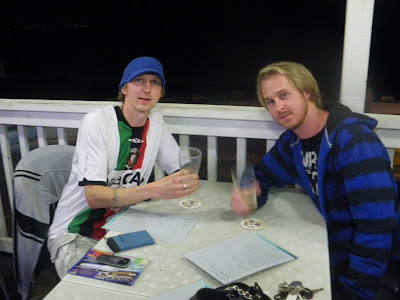 Me and George by the Pacific Ocean on a cool night at Coolie – Rainbow Bay Surf Club. 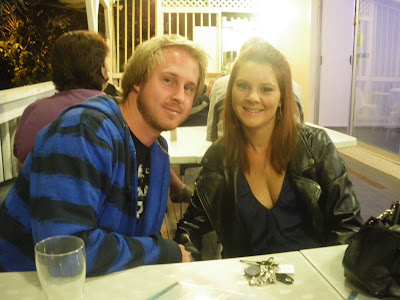 George’s girlfriend Elyse turned up – first time I had met her actually! 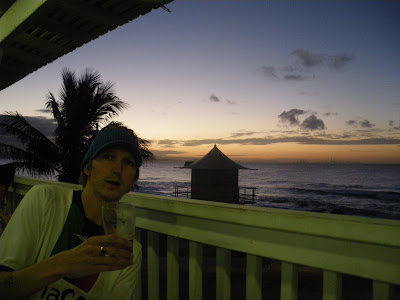 Just me by the gorgeous sunset from Rainbow Bay, Coolie! 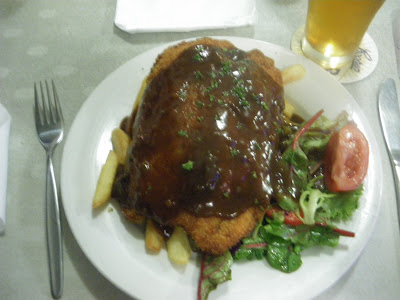 Dinner at the Surf Club. For $10 we got this Chicken Schnitzel meal and a beer! 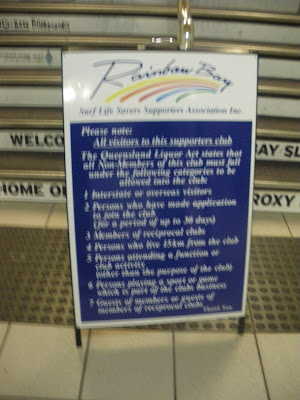 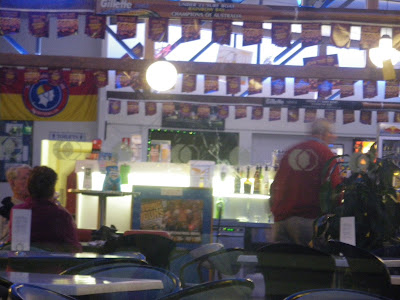 The Bar at Rainbow Bay Surf Club – I really like these Surf Clubs! So chilled out and relaxing. 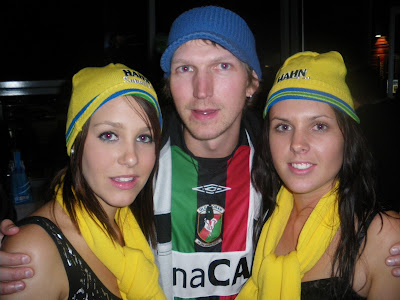 Having a drink with two hot New Zealand ladies. Australia had just been knocked out of the World Cup so we got all these free flags, scarfs and hats.


George, Elyse and Macca all had to work the next day (I was on a two week break in between jobs) and so we had an early night. I am very thankful for the excellent mattress and good night’s sleep I had there in Coolie. In fact I cannot thank George enough and only hope I can return the favour for him and Elyse one day.


The next morning I awoke and George had made me a coffee. I watched a wee bit of the World Cup – Japan beat Cameroon before heading onwards – to Point Danger for sunrise.


Where I Stayed – With George Sutton at his flat in Tweed Street, Coolangatta


Next up – Point Danger and onwards to Surfer’s Paradise

RELAXING WITH A SMOOTHIE IN COOLIE:

SEAFRONT AND GREENMOUNT BEACH IN COOLIE:

KEY SONG – ANYTHING BY COOLIO:
c u when u get there: