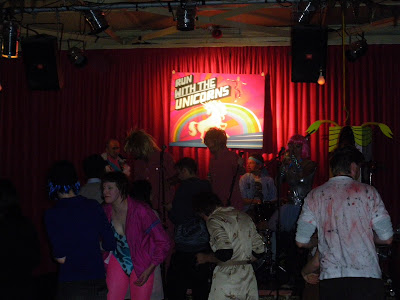 It sounds a bit weird but it’s only to be expected when partying it up on a Saturday night in New Zealand’s capital. I got to “run with the unicorns” but by total chance and thanks to three young ladies who provided me with this random tale to tell… 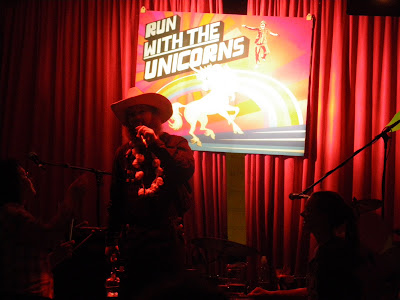 I was due to leave Windy Wellington the next morning but had decided to use one of my $1 off coupons in the Basement Bar, just below my hostel on Cambridge Terrace in the city. In there was only about 10 people so I sat down beside two young ladies, both of whom turned out to be English and room mates in the hostel – Gwyneth and Roxy, from Bloomsbury and Ipswich accordingly. Both were now living in the Zealand, and just happened to be staying in the hostel. Gwyneth had just got a job in town and was about to move into a flat. Roxy was working in the south island and had just popped up for the week on a week off. 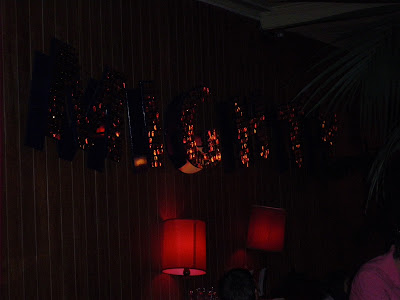 I joined them for a drink and they were planning to head out into the city, and possibly on to a party after that, organised by Emma, a local lady who worked with Gwyneth. 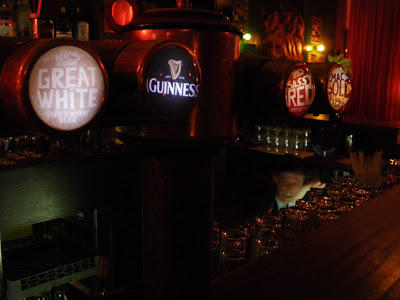 After a quick beer in the Basement Bar, Emma and Gwyneth set off to Emma’s flat to change, while Roxy and I agreed to walk on round to Cuba Street in search of a night club called “Mighty Mighty.” 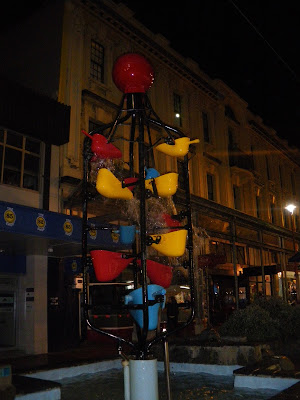 On route we passed this alternative fountain, a noticeable addition to Wellington’s pedestrian quarter. The water falls even at night. 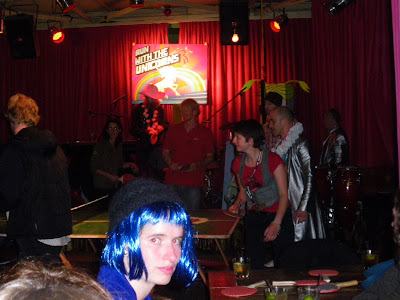 This was on Cuba Street. We knew Mighty Mighty was on that street but couldn’t find where it was, so it was a case of waling up and down past many in fancy dress. I forgot to say it was Halloween night, which in 2008 saw me man the bar in Bournemouth’s Pavilion Theatre, and in 2009 dress up in fancy dress for a night out in Sydney. Here in 2010, as a 30 year old I had been reduced to a quiet relaxing beer in one of the most southern capital cities in the world. 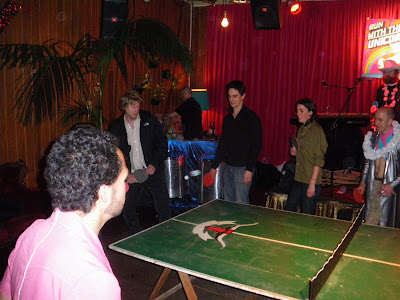 That was until we got to Mighty Mighty. It took a fair while to find the club, hidden in a small dark entry and up some stairs, we walked past it twice before finally paying out $5 entry fee and getting into the club, which immediately struck me as oddball and different. 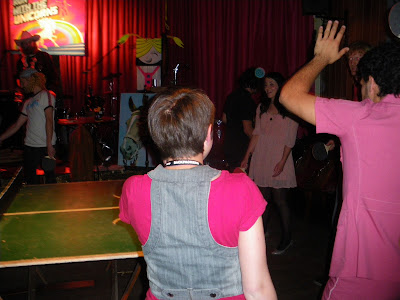 Which suited the mood fine. I bought a Mac’s White Wheat Beer in there for $7 so I had just one night in there all night. I was finding New Zealand to be very dear, given I had been there in 2007 and found it cheap enough, and the fact I had lived in Australia for a year meant to be charged $7 for a beer was extortionate. Gywneth had a bigger bottle of a beer called Castlepoint (also a shopping centre in Bournemouth) which was $7 as well but 700ml. But hey, the ensuing entertainment was free… 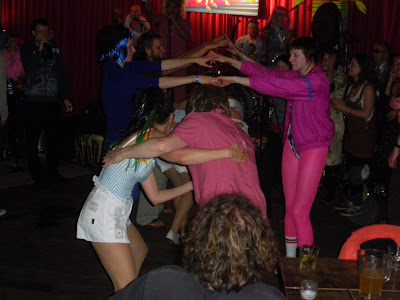 We sat on the right hand side near a stage, with a sign up saying “Run With The Unicorns” – obviously the band which was due to come on stage later. In the meantime, many crazy people walked round a table tennis table, clockwise, each shooting the ping pong ball to whoever was at the other side before rotating round to do it all again. 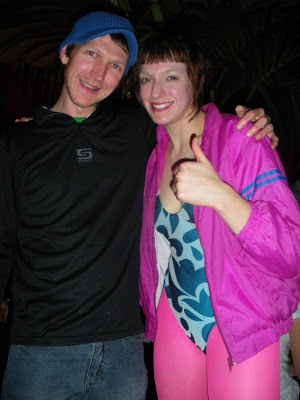 Neither myself, Roxy or Gwyneth had seen anything like this before. And we thought we were well travelled! The locals, and particularly Emma and Ann (who were in scantily clad colourful fancy dress for the evening, seemed to know what was happening. It was, after all, just a normal night out in Wellington. 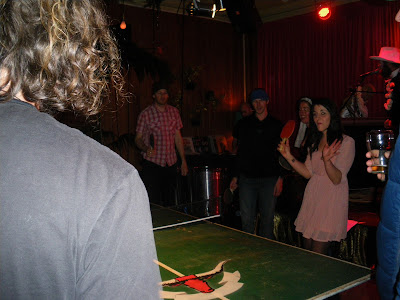 Roxy was first to the table to play “Clockwise Random Table Tennis” and I was next up. It was fun. It was random. Time was running out on my short stay in Wellington. 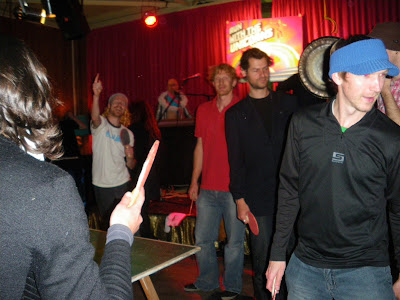 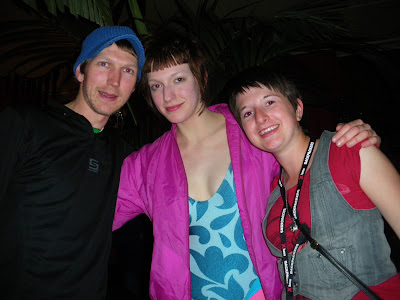 Then it got even stranger and more random. The band came on stage and everyone was dancing for fun. They played what is clearly their key song, and band name “Run With The Unicorns.” 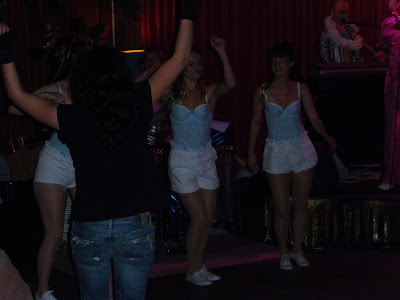 At this point loads of hot girls dressed as unicorns ran around on stage and it was banter! Once that finished, I had been invited to a party by Emma and Ann, but turned it down. I had an early bus in the morning, a long day ahead of travel and sight seeing and still had to pack. 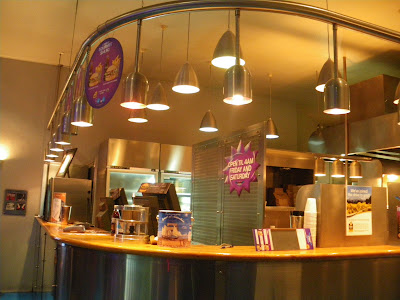 The Wellington night wasn’t quite over though, as Gwyneth and Roxy invited me to Burger Fuel, a special burger chain all over the North Island of New Zealand. 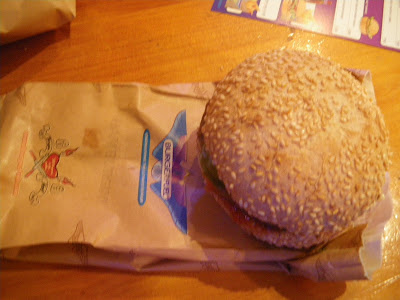 It reminded me of Fergburger. I wasn’t so peckish so just ordered a mini burger, even that was $4.90. I chose a Mini Hamburgini With Cheese. It was lush, a real gourmet style burger with tasty sauce and dressing and in a burger bun with sesame seeds on it. 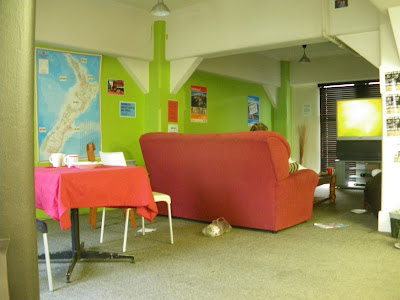 Then it was back to the hostel and the night out running with the Wellington Unicorns was over. On with the show…

RUNNING WITH THE UNICORNS: