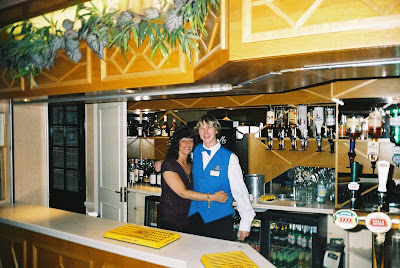 I had the pleasure of working in a busy Bournemouth Hotel for six months in 2004. It was a strange destiny that ended me up in there but anyway, I’ll give this blog entry my thoughts on it. Just another one of those jobs in a long line of ones I’ve tried and enjoyed for what they were worth. Before I moved to Bournemouth to live, I had been there only once and that was in 1994. In the summer of 1994, I visited Bournemouth with my family on a holiday. It was my kid brother’s first visit outside of Northern Ireland. We stayed in the three star Heathland’s Hotel in East Cliff in Bournemouth. We stayed there three nights, enjoying the pool, the beach and the town. Well life really does surprise you sometimes, and ten years later I was working there, and on the exact days I’d previously visited. I applied for the job there in May 2004, as I was looking for a busy summer job with a lot of hours. However I was already working in Tesco and had also applied for a job with the council working on the busy seafront. As it happenned for four months of that year, I ended up doing all three jobs in what was a busy time. 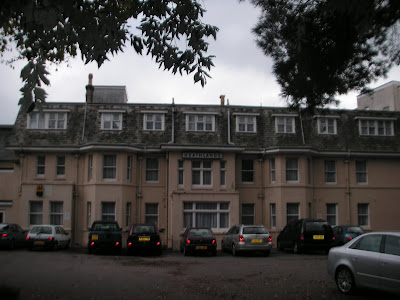 I did my first shift in the Heathlands Hotel in May 2004, working behind the Cocktail Bar. We didn’t do Cocktails. We specialised in serving overpriced beer to hen and stag nights and massive summer wedding functions. It was all a hazy blur really. I got my lovely uniform with blue waistcoat and rather posh name tag. I used a bit of cheeky Northern Irish spirit with the many rude customers we used to get. There’s nothing like smiling into the jaws of anger. I love it. I spent 6 months in there, but was part time due to my other commitments, still every Friday and Saturday night I’d be the only English speaking bar staff, until Mervyn joined. Like my job on the beach, I met many and various nationalities in there. I used to work with the lovely Christina from Germany and the very quiet Gustavo from Colombia. There were a lot of laughs on the way, including some ‘Fawlty Towers’ style gags. It’s easy to see where John Cleese got his inspiration from. 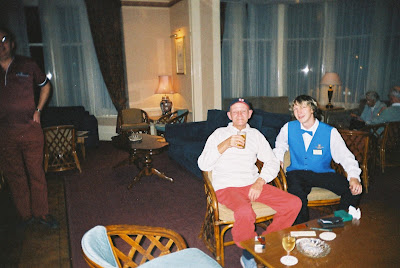 Customers asking for a G and T, would almost be certain to get a cup of tea with a plastic letter G accompanying it. A pint of Guinness would be an out of date tin, poured eloquently into a million times washed pint glass. One small dishwasher would refuse to take lipstick off glasses, and I used to leave my job on the beach at 5 pm every Friday and Saturday and then walk to the Heathlands Hotel. I would then get changed into my hotel suit. Then I’d work till 5 am on the 24 hour bar for residents and saunter home for two hours sleep before dreaming it all up again. Constantly drinking coffee through those shifts helped me through as did the ability to crack jokes that would never ever be funny right through the night. “Any chance of getting served tonight?” “Depends if I can be arsed to serve customers who moan!” If it means that much why not bring in a carryout eh? 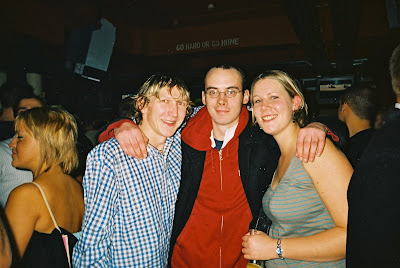 There were also many fights between beered up blokes and I had to shut the residents bar quite often and get the peelers called in. I worked in the other bar as well, often doing the Sunday ballroom dances for older citizens. They were quieter affairs and no drunk people making tits of themselves. I used to get a few free pints, the odd tip and even got my mates in a few times for a late beer. They were good times actually looking back, I cannot say I didn’t enjoy it! I got free food, breaks during quiet times and the managers used to let us say what we wanted. If we ran out of a certain wine, we’d just sell the next one. Beggars in 3 star hotels cannot be choosers! So then come November I left and on good terms, but the pay was lower and the hours cut into my football weekends, while I used the boring easy job in Tesco to bump up my pay packets while I continued my studies. In fact if you’re coming to Bournemouth I’d recommend the Heathlands Hotel. Just don’t piss off the bar man at 4 am, whose worked a long shift and expect him to be grumpy. You might just find he is a Northern Irishman with a lot of charm…


People I swore at – You’ll not guess.


Pints spilled – None. I’m much too good.