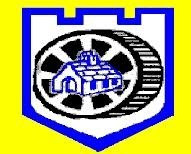 Back in 1991, while in P7, final year at Kilmaine Primary School we often had football matches at lunch and break time. To this day, only one match from that period sticks in memory and what a cracker it was. The primary school used to let us eat lunch in the classroom and in warmer days outside on the grassy banks by the main Silverbirch Road. There was a football pitch there, with two goals up for most of the year. However we also had an area up above that which was more ideal for a hardcore match of primary school football. We often played and we didn’t often pick teams, it made more sense to have one class against another class. Almost every boy that went to primary school with me liked football. It was the period where Mark Hughes, Gary Lineker and Paul Gascoigne were the big stars. Norman Whiteside had just retired, Ruud Gullit was regarded as the best player in the world and Northern Ireland had just scraped a 1-1 draw with the Faroe Islands in Belfast. Somebody brought a ball into school and the match could begin. 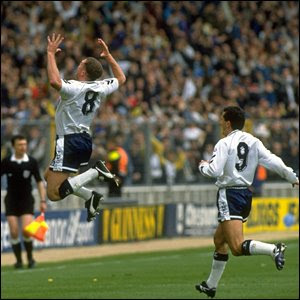 I was in Mr. Rea’s class which was known as P7R, the other classes I think were Mr. Dalglish, Mrs. Dunn, Mrs. Duffy, Mr. Cameron and Mr. Thompson. The football matches used to be mainly my class v. Mr. Thompson (P7R v. P7T), but the boys from the other classes all joined in and merged into either side. I think it was about 18 a side. We used a proper size 5 football, we wore our school shirts and ties, we played at the top of the football pitch opposite Lyndale Drive in Kilmaine. We used jumpers and schoolbags for one set of goalposts, and a dangerous “electrical no go area” for the other goals. We didn’t swap sides at half time! There was certainly no time for that. After munching our food, the game would begin. Some of the girls would play, a lot of them would watch, including Zoe Salmon, who has gone on to bigger and better things now as a very popular TV Presenter on Blue Peter.

The two captains as I remember it, were Dougie Gordon and Ricky Armstrong. Ricky was a good finisher, and a good captain. Dougie was your ball greedy arrogant type who had the skills of Paul Gascoigne. Yes, really. Dougie was a popular lad and I later actually worked with him in Tesco some years on. You had to be smart, you had to know who was in your team and who wasn’t, as we were all dressed in the same. Yellow and Black tie and either white or grey shirts. My preference was with grey, as then my Mum wouldn’t give me a bollocking if it got dirty cos you wouldn’t notice it as much. Looking back they were great days. I defy anyone to live a more luxurious and fun childhood as I did. Yes growing up in a politically and culturally divided Northern Ireland was a Godsend. I wouldn’t have it any other way. Kilmaine Primary School at the time was a lower middle class school. Nobody posh enough to own a helicopter or a farm, and nobody really whose parents were on the dole. It was the biggest primary school in population in the entire UK and I’m proudly part of that past. 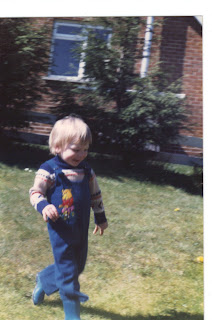 The game began and I’m near sure Dougie Gordon fired our team 1-0 up. You didn’t go back to your own half and kick off, their keeper just laid the ball down and said “it’s off.” The rules in those days were very different to professional football rules. We didn’t play the offside rule, cos nobody could prove it, there were no throw ins, on one side the ball just played till it was against the fence on the other side you kept chasing the ball far wide and down a hill. There was no backpass rule and my favourite rule was “fly nets.” I’ve since lived in England for 5 years and none of my mates here have ever heard of “fly nets.”!!! It was basically a great wee way not to piss people off. Nobody wanted to do nets for the whole match, so we’d take it in turn, as long as you were inside ‘the area’ and called the ball you could handle it and shout “fly nets.” Within minutes the goalkeeper who had made the save would be at the other end scoring. Come to think of it this match was better than the World Cup. For me it was the World Cup. So at 1-0, P7T fought back and again I reckon they went 3-1 up, with Rick Barr, Ricky Armstong, Ryan Creighton, Colin Walker and Gareth Hardy the main players. At a guess I’d say Rick Barr and Ricky Armstrong probably scored the goals. Dougie Gordon was a fighter and as ‘captain’ he would tell us to ‘get up’ he would dribble the ball past people and then try and score himself or set someone up. We were 3-1 down and its easy for me to work out why I remember it. I’d hardly had a touch all match really. 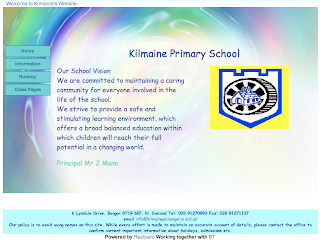 Scott Callen, Bruiser (Brian Hutchinson) and Magoo (Peter McIvor) all played for our side. One of them pulled a goal back, making it 3-2. Lunchtimes were short and we knew the bell would sound any minute. I was on a quest for glory and Dougie Gordon flicked the ball to the back post and I swung a right foot at it, banging in an equaliser just on the bell. It was amazing! I remember Dougie jumped on me, shoulders style in a celebration. He had been Gazza, I had just done a Lineker. Dougie was a Liverpool fan and I had chosen Tottenham. Either way, we had pulled our team back from an ecstatic thrilling lunchtime game of football. As the bell rang, that was it. We had drawn 3-3. The next lunchtime, there’d be another game. The thing is, this is the only one I remember. Perhaps I only scored that one goal at primary school. At any rate, I’d enjoyed and so had our team with the fightback. David Bowie once said it “we can be heroes just for one day.” I don;t have any photos or videos of any of those days, if I had that match on video, I could relive a 30 minute football match, where somehow you finally realise what life in all about. As an 11 year old, these were glory days which wouldn’t even pass Bruce Springsteen by. Well, maybe they would, but I enjoyed it.

Date of match – sometime between April and June 1991

Attendance – 2 ladies walking dogs and all the girlies of P7

(Apologies to those I’ve left out or forgotten, it was 17 years ago…)