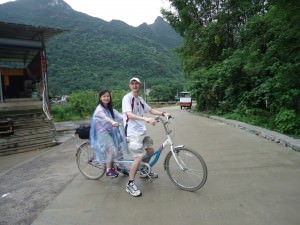 Believe it or not, but until recently I had never done tandem cycling before! You might have read my adventures cycling in places like Montevideo, Soweto and Taiwan, but China was the place where my girlfriend and I first hopped on a tandem bicycle! We were backpacking in the Guangxi Province of China and staying in Yangshuo. After a fantastic morning of bamboo rafting we ended up in a small riverside settlement known as Jo Yuen. Being stranded there and needing to get back to Yangshuo, we opted for hiring tandem bicycles. 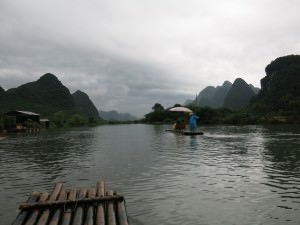 The gorgeous views while bamboo rafting on the YuLong River near Yangshuo, China.

We thought this would be a great way to admire the countryside as Yangshuo is spectacular. So we paid 30 RMB to hire a tandem bicycle for two from Jo Yuen and cycled back to Yangshuo.

How much does tandem bicycle hire cost in Yangshuo?

Rates are NOT fixed and are flexible. If you are foreign they will of course charge you more (a common trait in China). We paid 30 RMB at Jo Yuen and cycled one tandem bicycle back to Yangshuo. There was also a deposit of 100 RMB which we got back when we returned them in Yangshuo. 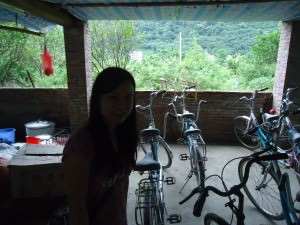 How was our tandem bicycle experience?

Wet wet wet! Yes a 1980s Scottish pop band would have been proud of China’s skies. We got absolutely drenched on our cycle back!! We had ponchos on and traffic was relatively light but despite the torrential rain I loved it. Due to the weather we didn’t stop too many times to admire the scenery as we basically just wanted to get back to base. The road signs are also not very clear so if you get lost, do ask people where Yangshuo is and they will almost all know the right way. Don’t follow the tourist traffic though as half of them are heading for Guilin and the other half to Yangshuo. 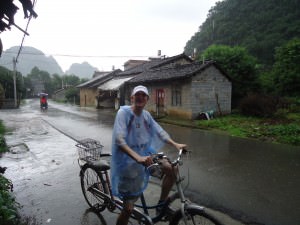 Getting soaked to the bone while cycling in Yangshuo, China!

How far is it back to Yangshuo after the bamboo rafting?
It’s only about 8 kilometres. It took us under an hour and we went slow and had heavy rain.
It really is the best way to head back to Yangshuo. If you’re a couple then go for the tandem cycling. If not hire individual bikes and get going! I loved the Guangxi Province of China! 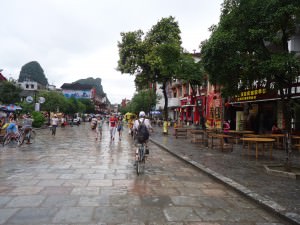 Cycling round Yangshuo on my return to the town.

Videos from tandem cycling in Yangshuo: