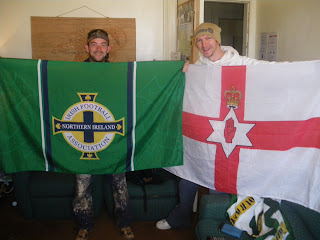 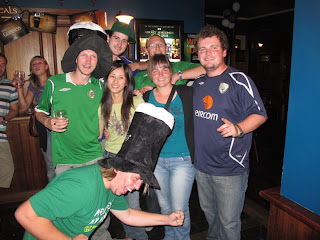 It was on the Australian island of Tasmania. Within an hour of being on the island I had met Chaz, a fellow Glenman from East Belfast. Within 5 weeks I had formed a new Northern Ireland Supporters Club. Hardly boasting a range of members, promising a load of meetings or being anywhere as lunatic as my previous carnation, the SOENISC had been. It was the calm after the storm. And another reason to wear my Northern Ireland shirt and promote my proud homeland, whose National Football Team remains the fourth oldest in the world. If not the best. 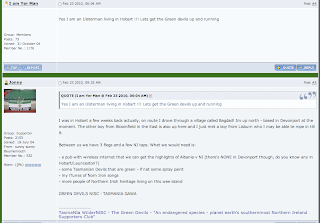 I got posting in the “Down Under” section of Our Wee Country, the main Northern Ireland Supporters Forum on the internet and raised awareness just in case there was anyone else in town. Or on this remote island. A guy posting as “I Am Yer Man” turned out to be Andy from Bangor and he was living in Hobart and up for setting up and forming the club. It was sorted. 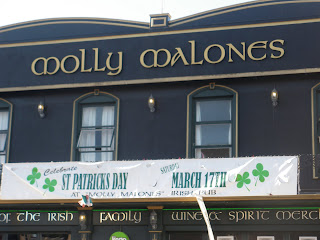 At the time I couldn’t get any time off work and had no car of my own so arranging the first meeting with Andy in Hobart was proving difficult, so I sent a message to Chaz on Facebook and told him that we were launching the club on St Patrick’s Night in Molly Malone’s Irish Pub, in Devonport. I had already met a host of Northern Irish people randomly in Devonport, but it would be a mission to get everyone together, and to even tell if they were all NI football fans, so I didn’t even bother trying. I had put in all that effort before for SOENISC. This was to be a quiet wee launch with a drink and a toast to say we were the southernmost NISC on planet earth. No meeting, no pen and paper, no football on the TV. 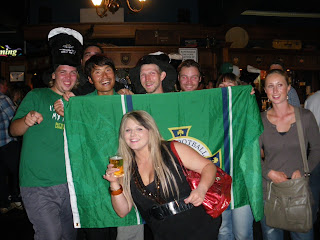 Northern Irish living in Tasmania?? There was Sara from Dromore staying in the hostel. There was her travel buddy Stephen also staying in the hostel. There was Andrew and Will from Larne, who I had met at Taste The Harvest Festival, they were NI fans and noticed my Northern Ireland top and called me over – they both still had the Larne accent yet had lived in Tasmania for over 10 years. There was also the Harry Gregg and Manchester United fan, Tim Stewart (an older gentleman) who I met one Thursday night down the Molly Malone’s. Then on St Patrick’s Night itself I met Shane in the hostel – a guy from Londonderry, and Paddy. As it turned out, Chaz and I were the only two around that night that were actually Northern Ireland football fans. 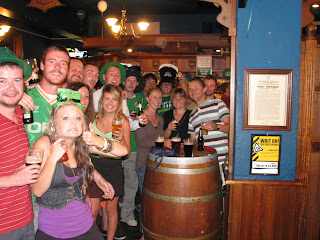 It didn’t matter. I got a crew from the hostel together as well and we all headed down till the pub. Only Chaz and I knew the toast would be raised and the club “formed and launched.” I got inside the Molly Malone’s that night, got myself a Guinness and suddenly in walks Chaz sporting a green tap and whipping out a Norn Iron fleg in front of a few of the foreign contingent from the hostel. 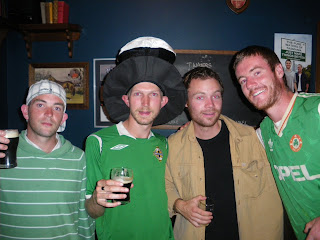 I had brung two with me myself and we got them out, posing for photos with the foreign contingent who were loving it. I had won a free Guinness Top Hat (with the date on it) and was wearing that as well. The funny thing was we were in a bar full of Southern Irishmen! There was one boy who looked like a Kevin Sheedy Back Till The Future kid from the 1990 World Cup. 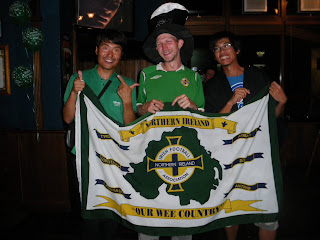 He was wearing a vintage ROI tap from 1990, which wait for it….his mate had got for free off an English traveller on a train in Laos. And here he was, a Dublin boy wearing it in Devonport. He was a good sport and with the other Irish boys they had te put up with my Danny Griffin praises and talk of Jimmy Quinn 1993 volley. “Sheedy’s brother” as I nicknamed him also got in till one of our photos on the night, for the memory. 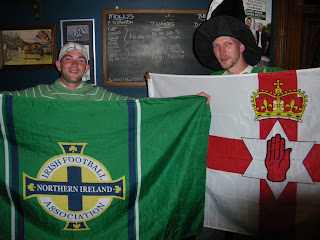 In the small middle room with glasses raised and flegs put up, Chaz and I launched the TasmaNIan WilderNISC without further ado. My Taiwanese, German and Danish friends were also in attendance. Later on up turns Sara from Dromore and Paddy from near Newcastle, added to Shane from Londonderry, there were actually 4 Northern Irish on the night, not that it mattered. Plus a boy form the hostel called Stefan was wearing a ROI away tap for yet more banter and a raking session. 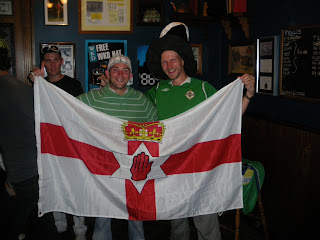 The night had te be cut short though, as the pub closed at 11 pm and Chaz and I both had 6 am starts the next day. But the club was launched, and the next official meeting would probably be the banter down in Hobart, Tasmania’s capital city. Even if it was a quiet affair, the NISC had been created and I was now a member and founder of planet earth\s most southerly NISC.
What happens in the future for the TasmaNIa WilderNISC is anyone’s guess…
Club Name – The TasmaNIa WilderNISC
Club Catchphrase – The Green Devil’s – An Endangered Species
Club Claim – Planet Earth’s Southernmost Norn Iron Supporters Club
Club Founders – Jonny Blair, Andy Power, Chaz Fitzsimmons
Club Formed In – Molly Malone’s Irish Pub, Best Street, Devonport, Tasmania
Club Formed On – Wednesday 17th March 2010 (Saint Patrick’s Night)
Club Matins te date – Devonport and Hobart.
How Till Become A Member – All ye need te do is attend a “mate in” on the island of Tasmania with at least one other Northern Irish football fan. A minimum of one NI fleg and one NI tap must be in attendance
Website – http://www.tasmaNIanwildernisc.co.au
Members – 3
Northern Irish People I’ve Met in Tasmania – 9
RAISING A TOAST TO THE TASMANIA WILDERNISC WITH CHAZ ON ST PATRICKS NIGHT, 2010 IN MOLLY MALONE’S IRISH PUB:
Join 15,017 Monthly Readers! If you enjoyed this article and LOVE travel and SAVING money, get e-mail updates from Don’t Stop Living – a lifestyle of travel! (It’s Free) 😉 Jonny