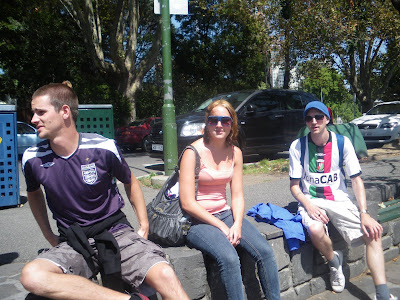 One Sunday night in King O’Malleys pub in Canberra I was sat with Daniel and Neil watching the live tennis tournament on the TV – the Australian Open from Melbourne. It was the final between Scotland’s Andrew Murray and Switzerland’s Roger Federer. We were in there just passing time really as we had done the whole sightseeing of Canberra over 3 days and were awaiting our overnight bus trip to Melbourne. Roger Federer won the tennis tournament, despite Murray having 4 set points in the final set, creating some kind of record of tennis tournaments. Roger Federer is officially the most successful tennis player of all time. From watching him in a bar in Canberra, who’d have thought that 14 hours later we’d be meeting him by a river in Melbourne? Are you crazy? No, but life sometimes is. 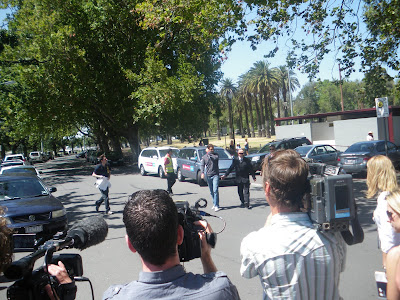 Without much sleep on the bus to Melbourne we arrived wearily at our hostel, Urban Central just before 9 am. It was Neil, Daniel and me, but we had met up with Gemma (from Norwich) and Greg (from Canada) and once we had a free breakfast and realised we couldn’t yet check in, it was time to go traveling round Melbourne. I’ll detail Melbourne itself in another blog post on here, but somehow this random travel led us to meet Roger Federer. 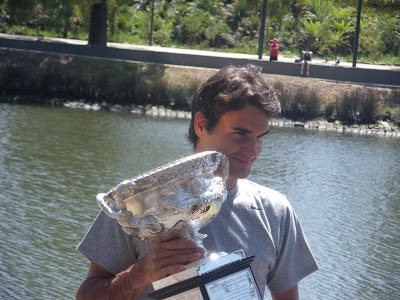 We rested for 40 minutes or so in Queen Victoria Gardens on the south side of the Yarra River before deciding to get up and walk across the bridge to the sports area of the city and back to the hostel eventually via Federation Square. We were down near the river and I noticed a guy holding a massive video camera. I had to assume he was from a TV channel and doing some filming. Randomly I asked him what he was doing and he said “Im heading down to the Southbank to film and interview Roger Federer!” No shit I thought as the 5 of us thought it might be a wind up. But within 50 metres of a walk we saw countless TV cameras and journalists and no sign of any members of the public. 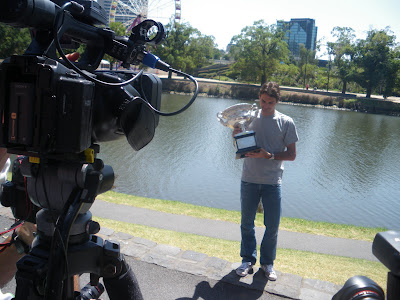 It was a private and secret location and Roger Federer and the Australian Open trophy were about to be filmed and interviewed by the river. However there were a lot of journalists and TV crew, but no sign of any bodyguards or indeed Roger Federer. Was he really coming down?? So we hung around and were near a podium where we assumed Federer would be, this was just a few yards from the Yarra River. 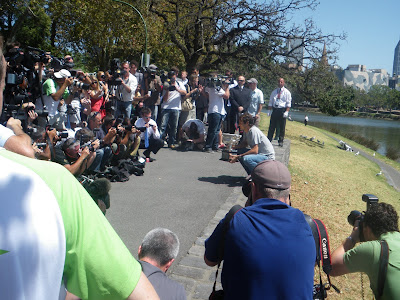 It wasn’t long till he appreared to a crowd of around 50 of us – there was Roger Federer getting out of his car and calmly walking towards the Southbank, where he did indeed get onto the podium there and do all his TV interviews. He was a tad overdressed!! 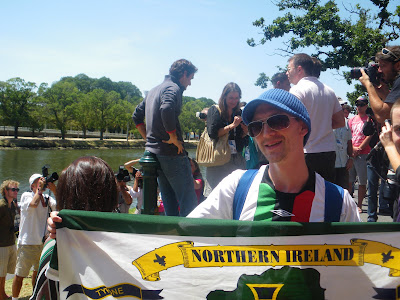 In the hot sun, he was wearing trousers and 2 tops. Most of us were in shorts and t-shirts. Roger Federer was also surprisingly small in height. I listened a bit to the interviews in between videoing and photographing him. It was all a bit surreal that we were so close to the world’s greatest ever tennis player. He spoke in Swiss-German and in English to different interviewers. 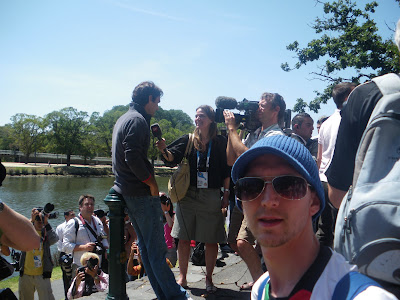 He held the trophy up for some photos and I posed about a yard in front of him with my Northern Ireland fleg. He didn’t have any bodyguards or security around him (are none that were obvious). It was a pretty cool moment. He wasn’t there for long and he did sign a few autographs before heading off. 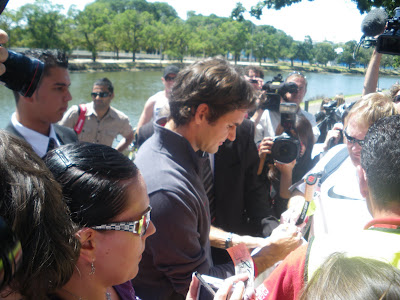 I didn’t bother stopping him for an autograph, which is weird because normally I would, but seeing Roger Federer was enough for us all. It was a spontaneous moment, and the celebrity theme would continue for the next 2 days in Melbourne, we would mingle with two more celebrity related people – and get our photo took with both of them as well…

Roger Federer Statistics:
Roger Federer (born 8 August 1981) is a Swiss professional tennis player. As of 15 February 2010, he is ranked world number 1 by the Association of Tennis Professionals (ATP), having previously held the number one position for a record 237 consecutive weeks. Many sports analysts, tennis critics, former and current players consider Federer to be the greatest tennis player of all time.

Federer has won 16 Grand Slam singles titles, more than any other male player. He is the last of six male players to have captured the career Grand Slam, one of only three (with Rod Laver and Andre Agassi) since the beginning of the Open Era and one of only two male players (the other being Agassi) in history to have won all four Grand Slam titles on three different surfaces (clay, grass and hard courts). Federer has appeared in an unprecedented 22 career Grand Slam finals, and as of January 2010, has reached the semi-finals or better of the last 23 Grand Slam tournaments, a record streak that spans over six years. Federer also holds the record of reaching 10 consecutive Grand Slam finals and has appeared in 18 of the last 19. Federer has won 4 ATP World Tour Finals and 16 ATP Masters Series tournaments, one fewer than all time winner Andre Agassi. He also won the Olympic Gold Medal in doubles with his compatriot Stanislas Wawrinka at the 2008 Summer Olympic Games. As a result of his successes in tennis, Federer was named the Laureus World Sportsman of the Year for four consecutive years (2005–2008). Because of Federer’s past accomplishments and continued successes, he is often called The Federer Express[10] or abbreviated to Fed Express,[10] the Swiss Maestro[10] or simply Maestro