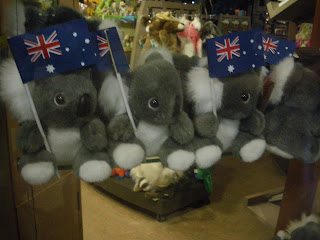 It was on the Great Ocean Road trip that we finally saw wild Koalas – or any type of Koalas at that. And it was perhaps time to thank a few things in the twist of fate that meant we saw them. First up I’d say we have to thank Darren Penfold – one of Neil’s old university mates. Darren had met up with us a few times in Australia over Christmas and told us that on the Great Ocean Road “you can see Koalas.” We didn’t have any further information than that but somehow hoped to see them! 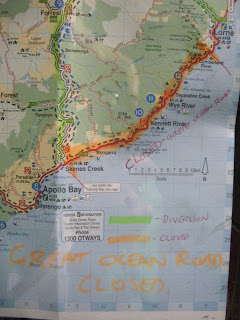 Then the second twist of fate was the road being blocked the previous day – as this meant an unintended trip to the tourist information centre in Lorne (one of the bigger villages on the Great Ocean Road). That’s where Neil picked up the leaflet that mentioned seeing Koala Bears at Kennet River. We thought nothing off it until we found ourselves stranded in Lorne at 3 am with no petrol. We had driven over 60 kilometres very slowly with the petrol light on! 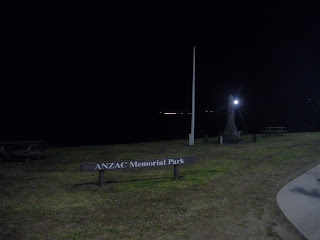 We parked opposite the petrol station nearest the Tourist Information Centre and War Memorial in Lorne. Neil and I had gone for a walk around Lorne, albeit brief but it was just after this when he noticed that “you can see Koalas” only 20 kilomtres back that way at Kennet River!” And with that the next part of the trip was sorted. 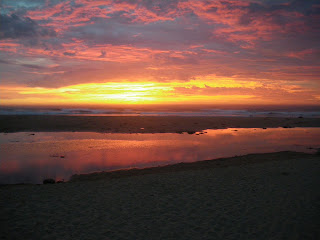 At 6 am, we filled the car up with petrol (we had waited there for 3 hours for the opening time) and headed back through a silenced Lorne and past the previous point where the Great Ocean Road had been closed. We stopped half way along for gorgeous photos of the 6.10 am sunrise. It was a fantastic view – some of the best I’ve seen in my lifetime. It was at a pullover stop at a place called Separation Creek. 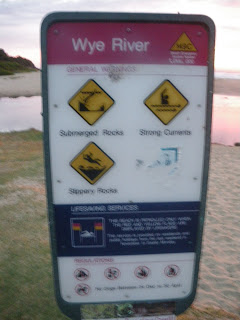 We drove on round then we got to Wye River (a village named after the river!) and then Kennet River (also bizarrely a village named after the river!). At Kennet River we saw a bridge and to the right a street which led to what was presumably the local “shopping centre”, a shop and a cafe, nicely called “Koala Bear Cafe”. The guide in Neil’s hand said to turn left up Grey River Road, which we did and then we drove on up the hill. The hill was rocky, but the car we had was great and got up it no problem. 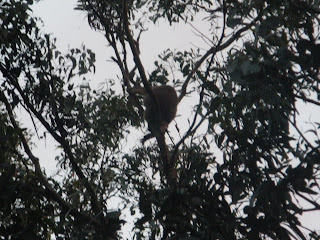 Half way up a steepish hill and we’re looking out the windows of the car and into every tree for Koala bears. we really dont think we’ll see any. And then “IS THAT ONE?” shouts Paul. “Where I ask?” and its obvious, high up in one of the trees is a blatant Koala. In the morning sky, with the dawn breaking and the sun just rising, it was hard to spot at first. But I stopped the car and we all got out. 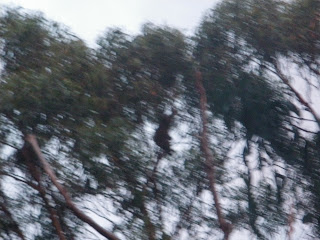 In the end there were quite a few cute Koalas there. We saw 6 in total I believe, spread across 4 trees. They cling onto the branches. They are peculiar marsupials. They look down on us every now and then, but they are so high up. They didn’t dare climb down any further. They were clinging to the branches, they were eating leaves. They looked cute and quiet. 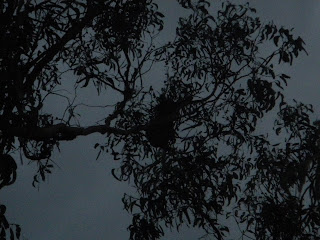 We tried not to disturb them and I took a video and a few photos, but they were very far away and you really had to be there to see them. Now we had seen Koalas and Kangaroos both in the wild in the space of one day. From Koalas at Kennet River, it was time to turn around back down the hill and head back towards Melbourne via a few more interesting sights. 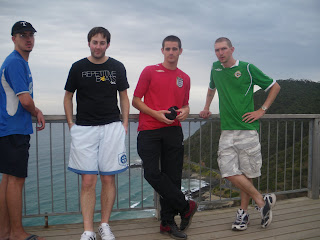 The only one I’ll cover on this post was the trip to Teddy’s Lookout in Lorne. We drove along George Street and got out and walked the 600 metres down to Teddy’s Lookout, only to find that we could have driven there as the path for walkers ran adjacent to the road. We admired the view of the Great Ocean Road though look less than enthusiastic on that photo. At Teddy’s Lookout, we were also surprised to see no sign of my footballing hero, Sheringham himself. 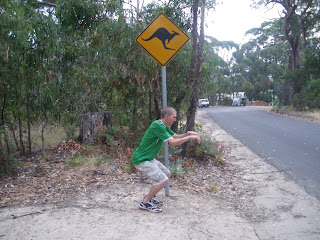 I also posed like an eejit against the Kangaroo sign. Back in the car and we drove back through Lorne, clearly avoided the street named “Gay Street” on our way back onto the Great Ocean Road, where we would stop again at Anglesea.