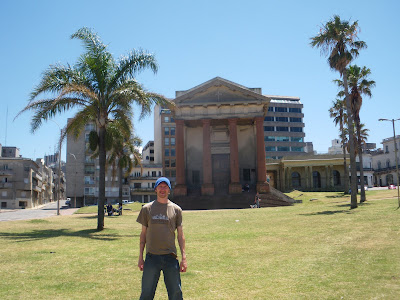 Uruguay conjures up a few images. But actually, if it wasn’t for their football heroics and the delicious cuisine known (at least in the UK) as Fray Bentos pies, then this little nation, of only 3 million people would be largely un-noticed and bereft of the worldly reputation it’s heroes of yesteryear have achieved on it’s less than arrogant outlook on this little planet of ours.
Schiaffino and Artigas are hardly names that roll off the tongue in the same sentence as Maradona and Che Guevara in neighbouring Argentina. Bollocks to all that, Uruguay have just won the Copa America of 2011, they finished 4th in the 2010 World Cup and they won the first World Cup back in 1930. This is a country with more pride and self assuredness than the average passer by would care to believe. And probably because the average passer by, “passed Uruguay by.” Only a fool would leave this country out of a detailed itinerary to travel in South America. It would be like going to the UK and forgetting to visit Belfast or Northern Ireland. Imagine that. No, I’d rather not…
Equipped with my usual Northern Ireland shirt and well travelled backpack, I attempted to do as much of Montevideo as I could in a short time. Becoming a local was a big part of that, as after a few nights hostelling in downtown Montevideo (at the luscious Che Lagarto), I arranged a homestay with a local family. It had always been my dream to live in Uruguay.
And though I didn’t work there, or have the time or money to stay for long, I studied Spanish there, became a regular at Penarol and delved my way into the culture of Uruguay. A place which neighbouring Buenos Aires should turn red with envy at. No Argentine arrogance here. Just raw busy, hard working Uruguayans in what is often known as “the Switzerland” of South America.
At the start I toured the city. As the typical tourist. Using local buses to get around. Using bikes from the hostel to go into local “estates” and watch the next Forlans and Suarezes lining up the ball as if they had a penalty to win the World Cup.
Join 15,017 Monthly Readers! If you enjoyed this article and LOVE travel and SAVING money, get e-mail updates from Don’t Stop Living – a lifestyle of travel! (It’s Free) 😉 Jonny

3 thoughts on “Backpacking in Uruguay: The Full Montevideo”