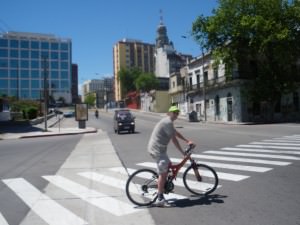 Montevideo is one of my favorite cities and the only one I can really say I lived in in South America (albeit only for a few weeks with a local family while studying Spanish at a college in the Old Town but I loved it!!). With a relaxed street-life and an easy to navigate street layout, Montevideo is ideal for exploring by bicycle, so I did just that. Yes – go cycling in Montevideo! 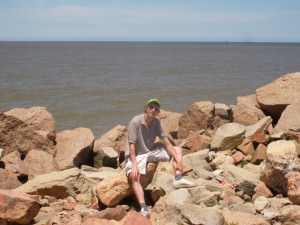 Relaxing by the southermost tip of Montevideo, URUGUAY. Amazing country!

I met a cool guy called Wesley Tang from Macao on my first day there and we decided to tour the city by bicycle together. To start with I stayed in Plaza Independencia at the Che Lagarto Hostel, before organising a homestay. They did cheap bike rentals so we took them for a full day of cycling in Montevideo! 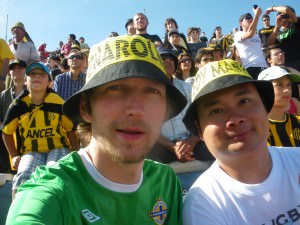 The mains sights in Montevideo for me were the Estadio Centenario (which houses a football museum and hosted the first World Cup in 1930), the Old Town, Pocitos Beach, the parks at Parque Rodo, Plaza Independencia, Avenida 18 de Julio, Tristan Narvaja Market, The Parliament, Mercado del Puerto and Playa Ramirez. Honestly I explored Montevideo and loved every part of it. It’s probably the most likeable city in all of South America. Just a few photo highlights below… 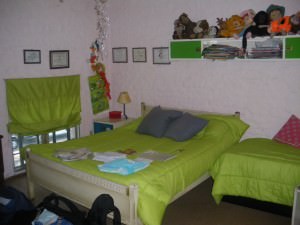 My amazingly comfortable bedroom in Montevideo – thanks to Perla! 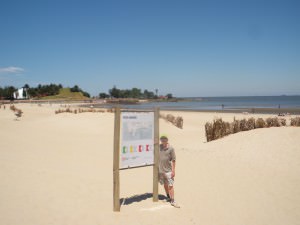 Relaxing on one of many beaches in Montevideo – this is Playa Ramirez.

So my advice if you want to see Montevideo is hire a bike – really you will get around much cheaper and easier than by bus and walking. I cannot say enough good things about Montevideo, so here are a few of my other posts on it – I got immensely sentimental when writing this and can’t believe it’s now three years since I was there:

Watching the football in Montevideo:

By Pocitos Beach in Montevideo:

Montevideo is one of my favourite cities and you won’t have heard the last of it on here – Don’t Stop Living is condemned to a lifestyle of travel.

4 thoughts on “Cycling in Montevideo, Uruguay”