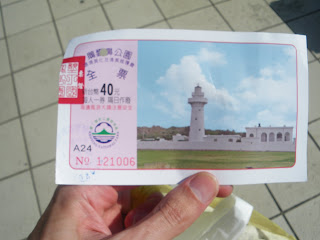 The trip to Eluanbi started from the town centre of Kenting. We wanted to go and visit the Lighthouse in Eluanbi and also go to the furthest southern tip of Taiwan while we had the chance. The chance was seized as we hopped on till a 17 or an 88 bus (for 22 dollars), which takes you right down to the entrance for Eluanbi Park (as its called).The bus journey was one of the most scenic and spectacular I’ve ever seen, cruising past a large stone by the sea called “Sail Rock”, and through two random seaside villages – Hsiangchiaowan and Shadao. It was a scorching day and we had already spent some time on the beach at Caeser’s Cove, so we kicked off in Eluanbi with water and buying an entry ticket (worked out at less than £1, cant remember exactly though) for the park. It was a hot ascent up the hill to the white lighthouse, where it was on your left and a plaque on the right. 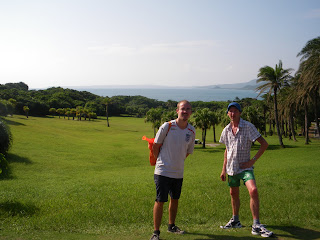 On the way up we got the most fantastic view of the south Taiwan Coastline, which includes Kenting Park, the two beaches we would visit that day and a scenery drenched coastal road (of which we’d been on twice, once from Kaoshuing to Kenting; then from Kenting down to Eluanbi). At one point walking to Eluanbi was an option as Neil said there wasn’t another bus until 2.40 pm, but luckily one did show up and suddenly with an amazing view we were being burnt on the south tip of Taiwan. On this trip it was also my first view of the Pacific Ocean for over 2 years (New Zealand and Los Angeles). It looked fresh, warm and peaceful. All this despite a very recent Tsunami and Typhoon which killed lots of people on Taiwan. The typhoon had headed back to The Philipenes by now. There was no time or reason to be scared. Sadly in the wake of such natural atrocities and disasters, in places like Eluanbi…life must go on. 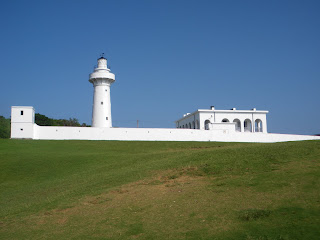 We saw Quixingyn Basepoint, which is a very tiny monument at the top of the hill just in front of the Pacific Ocean walkway. The monument slants to a triangle at the top and is set on top of some stone bricks. Written in Chinese Mandarin on the monument, it represents the “basepoint of the territorial sea of the Republic of China”. In order words basically the southern most point on the island of Taiwan. Yet we were still 100 yards from the water…more to follow. 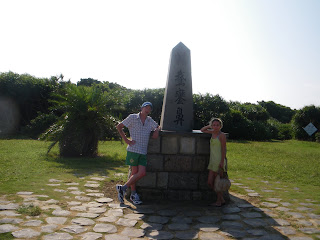 It was at the Quixingyn Basepoint that a random local Taiwanese guy wanted Natalja and I in his photo, we got one too. Is being a European really such a big deal? I enjoyed my single moment of fame at Eluanbi before we headed up to the main reason for going there – the famous lighthouse. Eluanbi Lighthouse. Often referred to as “the beacon of South East Asia.” A basic looking lighthouse. A bit further inland than most lighthouses however and with a very very strong bright light. The lighthouse is basically on the south east coast of Taiwan and is an invisible unofficial gateway to Asia on the Pacific Ocean side. We saw helicopters fly by, and many boats out at sea. Two flegs are amast at the entrance to the lighthouse – one represents Taiwan itself, the other is an old sailing signal fleg. Once through the front gate, there is the lighthouse straight in front of you, and inside the walls (almost a fort style lighthouse this one) there is room to dander round and there is a mini “museum” with details of the history of Eluanbi Lighthouse. 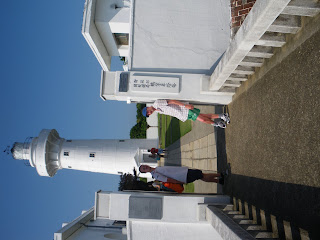 The day we were there you couldn’t get to go up the actual lighthouse, the door was locked. But you could get your passport stamped inside the museum. I didn’t have my passport with me, but instead stamped my “global passport notebook”, from which these blog memories and information come from. We didn’t spemnd long in there. It was a very hot day, but we did head over to the wee shop and browse the gifts. After that Neil went to show us the southern most tip of Taiwan. 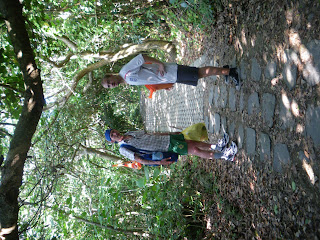 We walked past lizards and all kinds of insect down this narrow forest type path This would have been the first chance for me to see a live snake probably, but I didn’t see one, although they do live there in the short walk down to the rocks. On the way Neil pointed out that there is a rock festival held there every year, and that he was there that year. It didn’t strike me as the sort of decent venue for a music festival. In a hot stuffy park with a jungle and an ocean, it hardly sells itself as a rock venue. You dont want to be singing along to Blur only to be attacked by snakes and lizards half way through “Country House.” Neil slept in a tent in the jungle that time. I respect that. I wouldnt want to waken at 4 am with a giant rat eating lizard biting my hair off. I didn’t need to worry, we simply followed the short narrow forest path down to the rock, where for the first time (at Eluanbi) we could see in front of us the Pacific Ocean splashing on the rocks. A sense of irony and a pun I could laugh at…all related to a hit by the Lighthouse Family back in 1996. The song was called “Ocean Drive.” At any rate we were Lifted and there was no sign of a Raincloud. 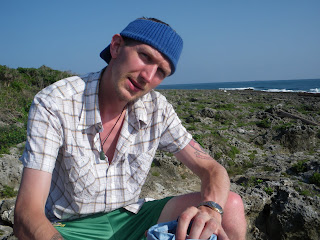 We rested there on a man made platform by the rocks and gazed out at the sea. A helicopter flew by and I sipped on water which had turned into back sweat before I’d even gulped it. it was the hottest day I’d had for a long time. We were at the southern most tip of Taiwan. The Edge of Asia. All that lay south was The Phillipenes. All that lay north was the island we stood on: Taiwan/The Republic of China (as its meant to be known). All that lay east was California and Mexico. Thousands of miles away. And to the west China and Vietnam. On the way down there was even a sign up saying “No Entry – Typhoon.” At least that’s what it looked like. We ignored that warning just to say we had been to the southern tip of Taiwan. It was a good moment in life. 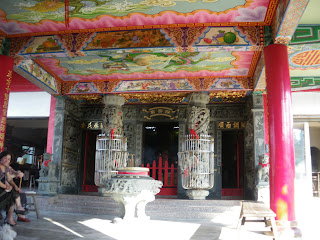 After all that there was still the walk through the park, the market stall and your obligatory temple to pass by. At the market stalls we saw a dog wearing pink sunglasses and I bought a pair of shorts (I’ve stupidly packed loads of trousers/jeans on this trip, and am in constant heat of 30 degrees plus!). The shorts I would also need for the following 2 days as we then began our adventure up the East Coast of Taiwan and into the famous and mystical Tailuga (often called “Taroko Gorge”). After this we waited for the bus back to Kenting (well, Natalja and I did; Neil had to head back all the way to Shinying, we had a few more hours to enjoy Kenting, before yet another trip to Kaoshuing in preparation for Tailuga. At the moment before the bus arrive, Neil’s mate Jen, a landlady of the “Ocean Every Day Pub” in Shinying dropped by in her car with her husband and her dog. She said hello but soon we had to jump on the bus. A number 88. Our short and pleasant trip to Eluanbi was over. We had seen everything there was to see there, and for a moment at least, I was the person situated furthest south on the island of Taiwan.


Where? – Eluanbi, southern most village in Taiwan, part of Kenting National Park.


Key Song – Pulp – My Lighthouse or anything by The Lighthouse Family.